Extraordinary moment polar bear is filmed swimming after adult reindeer, before dragging it ashore and devouring it during two hour feast

Extremely rare footage of a polar bear hunting down an adult reindeer has been captured on video by Polish researchers in Norway.

Hailed as being the world’s first such sighting, the extraordinary footage shows the adult female bear swimming after the reindeer after it became separated from its herd. 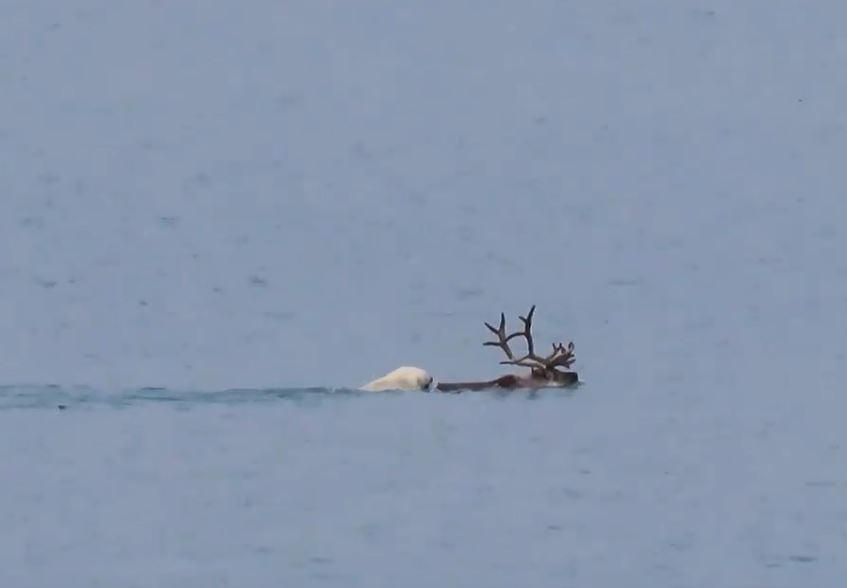 Hailed as being the world’s first such sighting, the extraordinary footage shows the adult female bear swimming after the reindeer after it became separated from its herd.Izabela Kulaszewicz/Mateusz Gruszka

Captured by scientists Lech Stempniewicz, Izabela Kulaszewicz and Norwegian Jon Aars, the video then shows the bear catching the reindeer and drowning it before dragging it ashore and eating it.

During the two hour feast, the bear has to chase away polar foxes and birds before covering the remains with rocks and going for a 12 hour sleep. 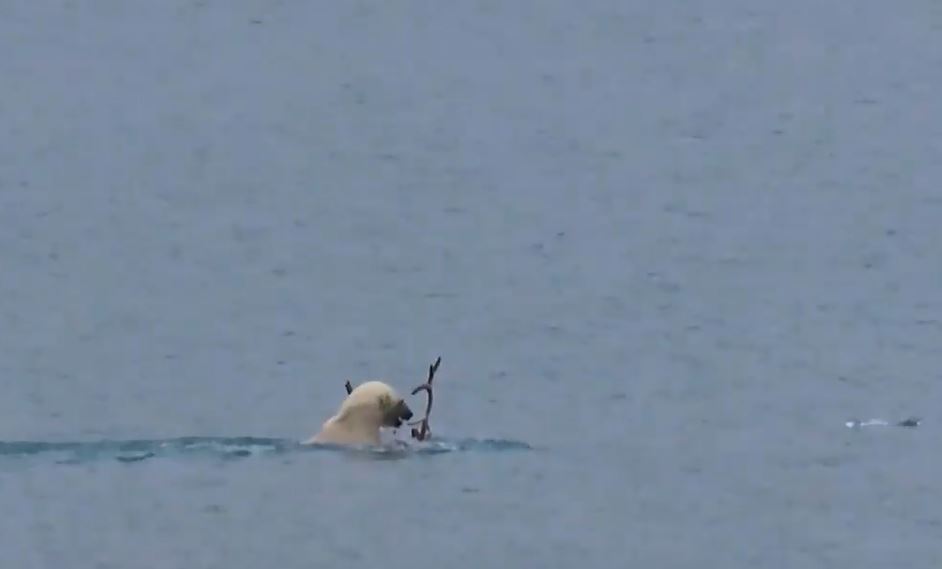 Describing the remarkable sighting, the scientists said: “These observations provide the first detailed description of a complete and successful polar bear hunt of a fully functional, adult Svalbard reindeer.

“Polar bears can travel very quickly over short distances so presumably most reindeer taken by polar bears are killed because the attacking bear gets close up to the reindeer before the latter can react.

“The most interesting aspect of this particular observation is that the bear drove the reindeer into the water and was then able to catch it because it could swim faster than the reindeer.”

The video filmed at the Polish Polar Station on the edge of what is known as ‘the bay of the polar bear’ on the Hornsund Fjord in Spitsbergen in the Norwegian Svalbard archipelago, was captured last year but has only now been made public with the publication of the scientists’ report. During the two hour feast, the bear has to chase away polar foxes and birds before covering the remains with rocks and going for a 12 hour sleep.P. Klicz/P. Nowosad

Two days later, workers at the Polish Polar Station noticed the same polar bear with another reindeer hunted in the sea.

The sight is an unusual and intriguing one due to existing knowledge about the polar bears’ diet, which up to now has only been documented as being mainly based on seals, whose calorific fat helps the bears survive the harsh Arctic climate, but also walruses, cetaceans, birds and their eggs, as well as sea and land vegetation. Whilst polar bears eating reindeer wasn’t completely unheard of, this was thought to be mainly when a bear came across a carcass, rather than that it actively hunted the reindeers.

Writing in the latest issue of ‘Polar Biology’, the scientists who captured the footage said that “Pre-2000 sources state that polar bears do not attack Svalbard reindeer.” The scientists say reindeers could be becoming a staple diet for the bears  as a result of climate change.I. Kulaszewicz/P. Ulandowska-Monarcha

Their report, which is ‘the first description and documentation of the complete course of a polar bear hunt for adult reindeer in Hornsund’, also reports other interactions between polar bears and reindeer on Svalbard, which they believe suggests that polar bears hunting now hunt for reindeer more often than they used to.

The scientists said: “This increase in hunting is probably linked to the reduced ice cover, with bears spending more time on land, and a growing reindeer population.”