An Afghan war veteran who went on the run with his pet puma has handed himself in after a two day cat and manhunt.

Kamil S. (whose surname can’t be revealed because of Polish law) had taken to forests in Silesia with his six-year-old big cat called Nubia after staff at a zoo in Poznań tried taking the animal away. 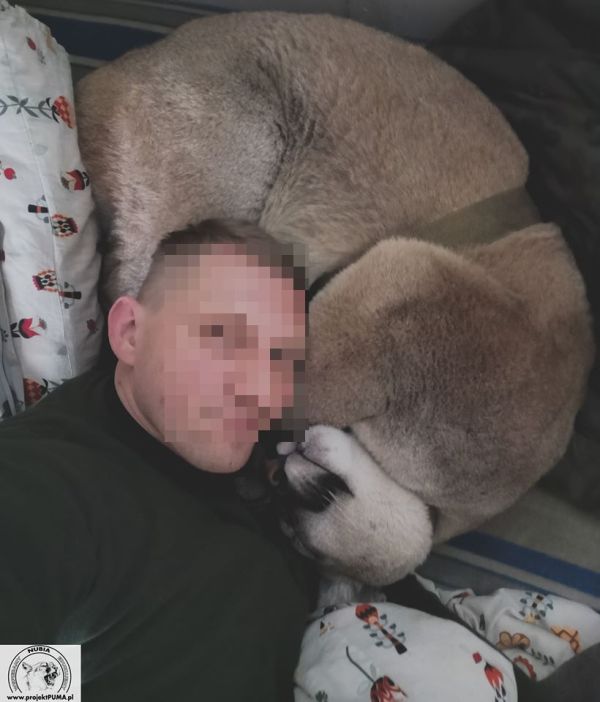 The 36-year-old who bought Nubia when she was a cub, kept the 40kg animal at his home in Ogrodzieniec in Silesia, together with his family, a cat, and a dog.

Kamil documented their life on Facebook, as well as organized workshops with the domesticated big cat and lent the animal for photoshoots as part of an initiative called ‘Projekt Puma’.

But under Polish law, buying and keeping wild animals at home is illegal and in January this year a court ruled that Nubia should be moved to Poznań Zoo, which has experience with large felines. 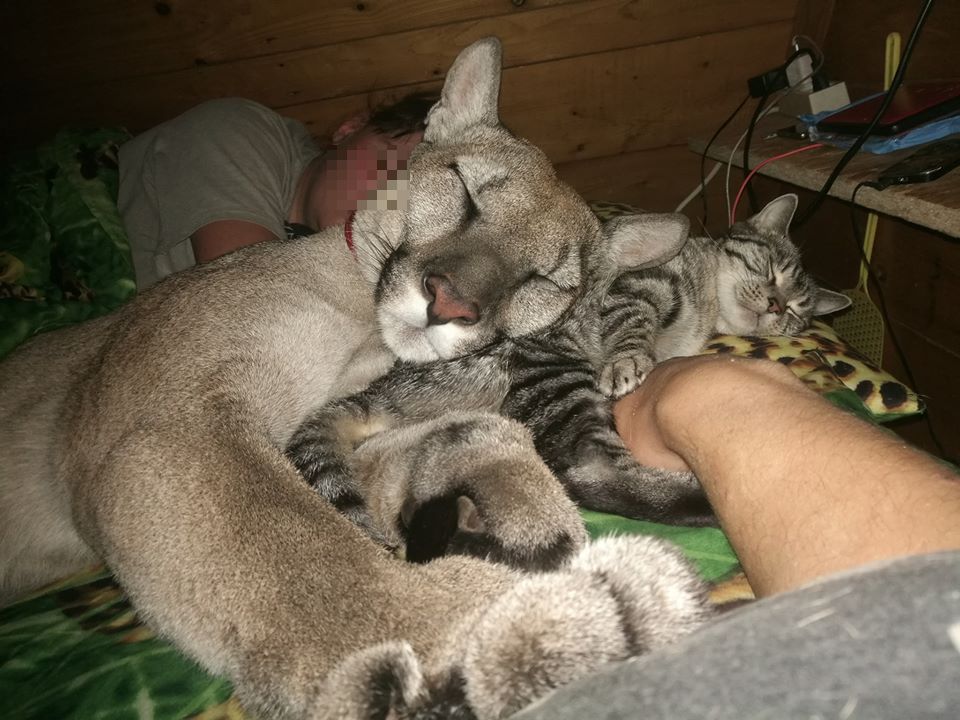 Nubia is treated like one of the family pets.Projekt PUMA – Nubia/Facebook

On Friday last week, zookeepers, accompanied by journalists, attempted to take Nubia away, forcing the war vet to flee, taking Nubia with him. 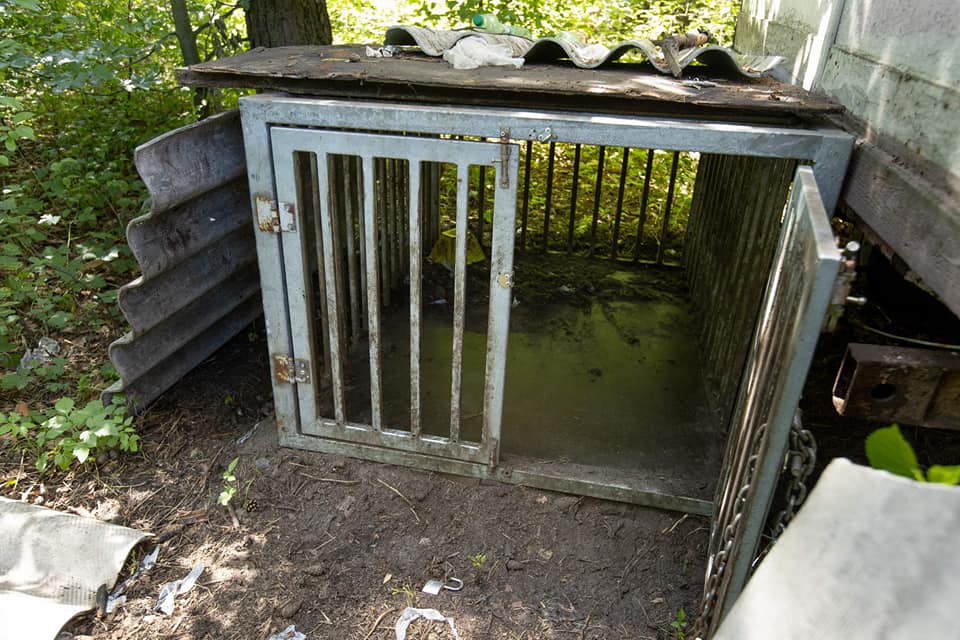 Posting a photo of what they say is Nubia’s cage, Poznań zoo tried to take the big cat away.Zoo Poznań Official Site/Facebook

Posting on social media, cat-loving Kamil said: ”Today we were attacked by employees of the zoo in Poznań.

“One of the employees tried to knock me down and overpower me. He definitely used force. (…).

“My reaction was to defend myself and the most beloved animal that I have, so I used such words as ‘after my death’ because Nubia is my child, is treated even better than my child.” 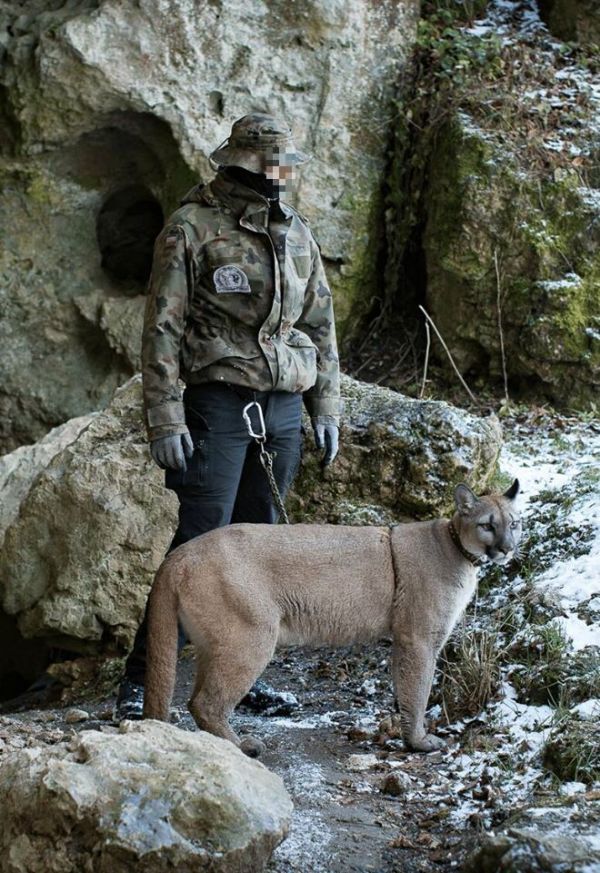 In a tit-for-tat exchange, Poznań zoo responded by posting: “Yesterday, we went to retrieve the animal.

“While waiting for the police to arrive in an unfenced area with a barrack, by which a small cage with a puma was standing (in which the animal can't even stand, excrement and plastic bags were around it), we are attacked by the former owner - with a knife. 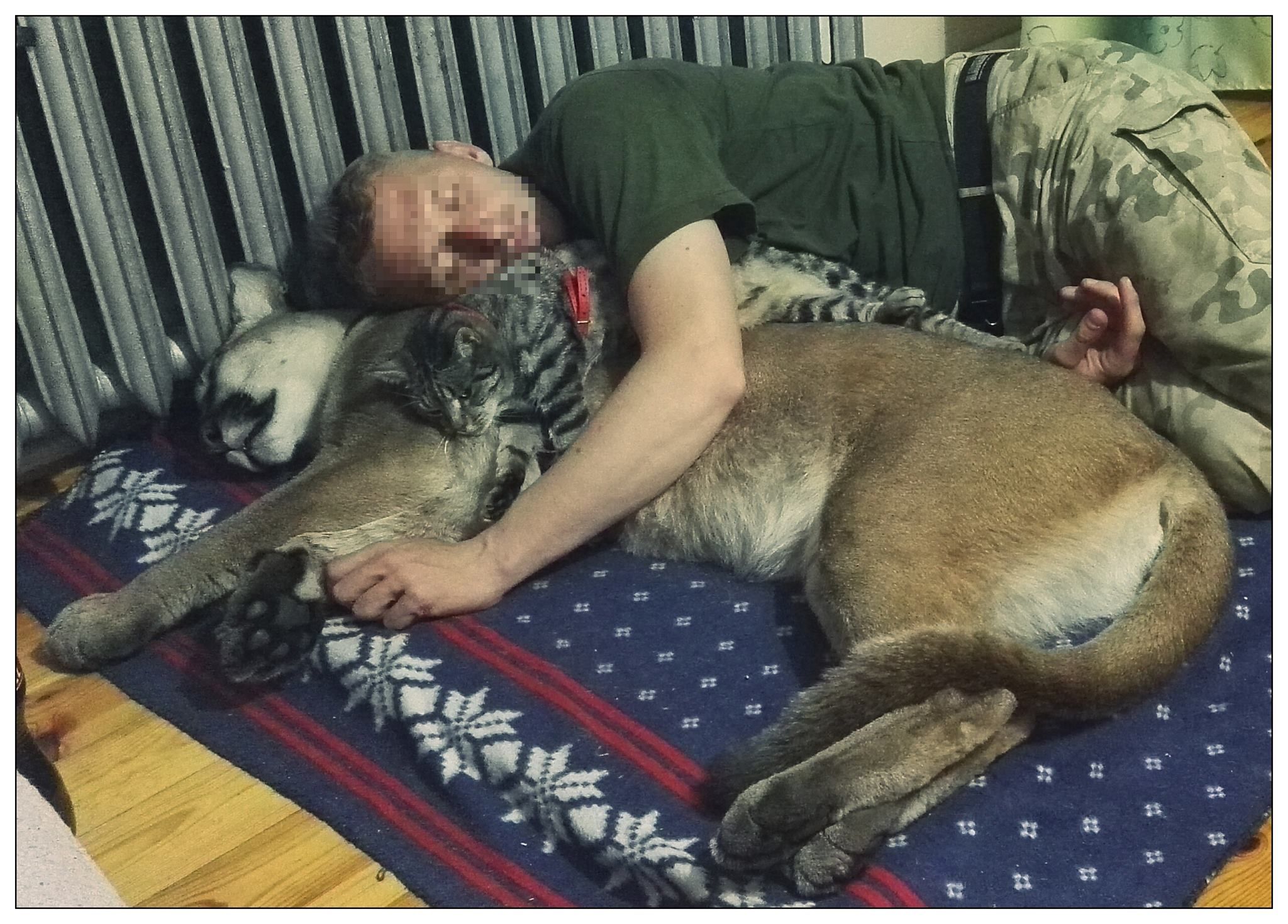 Under Polish law it is illegal to keep wild animals.Projekt PUMA – Nubia/Facebook

“The event is documented by the media present there, miraculously the zoo workers are not injured.

“The animal was brutally pulled out and dragged by its owner into the forest. Due to a knife attack and the animal being one of the most dangerous species, which poses a threat to people, the police organized a manhunt and took appropriate procedures.” 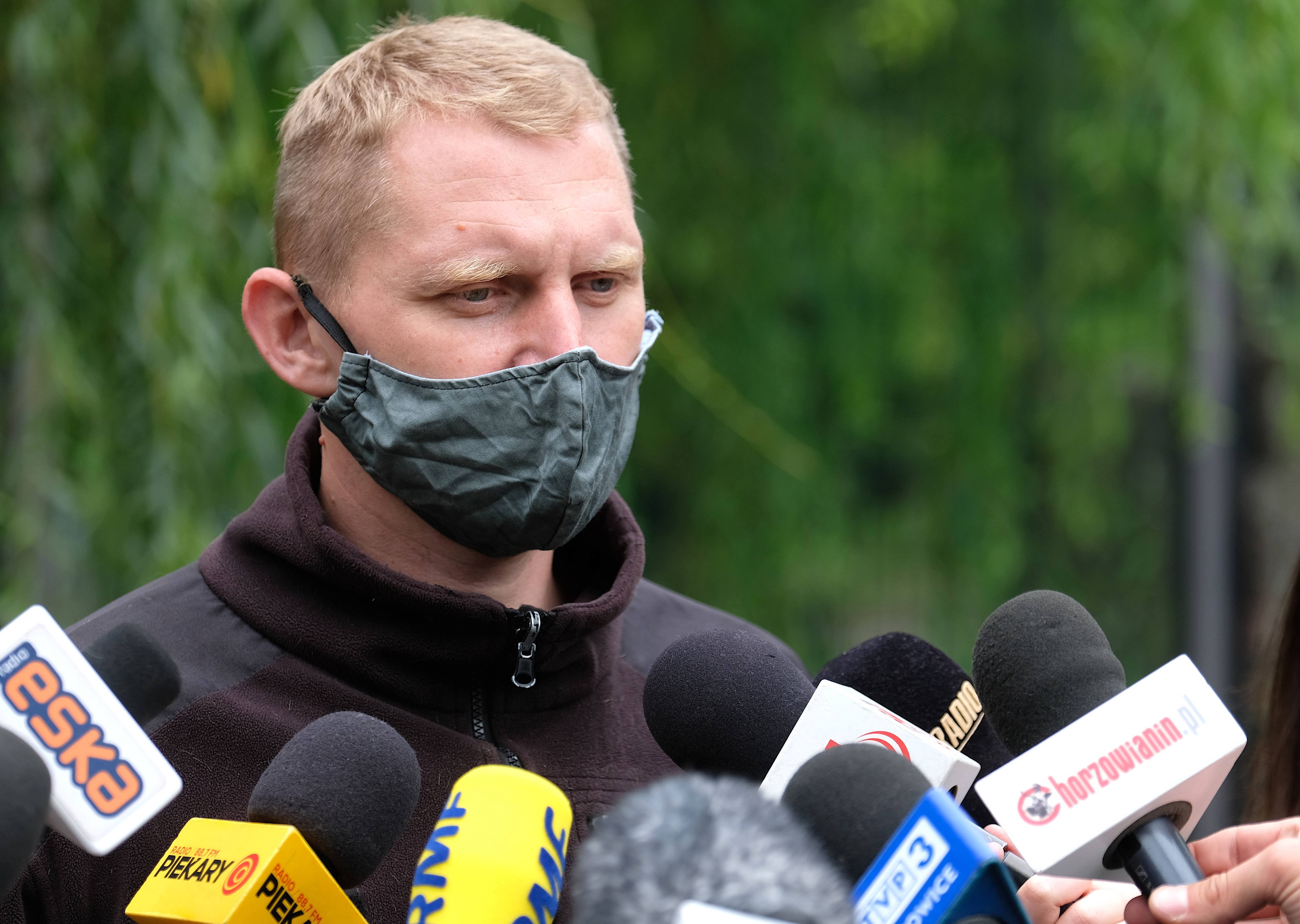 After handing Nubia over to the zoo in Chorzów, Kamil hjeld a press conference.Andrzej Grygiel/PAP

According to the zoo’s director, Ewa Zgrabczyńska, cougars should never be kept as family pets. Domesticating them makes it impossible for them to be reintroduced to their natural environment. Even growing up with humans, a cougar remains a wild animal and can be dangerous.

Local police in Silesia, who were called in only after Kamil fled, said: “Yesterday we were surprised to learn that the representatives of Poznań Zoo together with the journalists accompanying them made an independent attempt to take Nubia away, without informing us earlier.

“This attempt proved unsuccessful and resulted in the escape of the owner with the puma. The only positive aspect of this is the fact that no one was injured.” 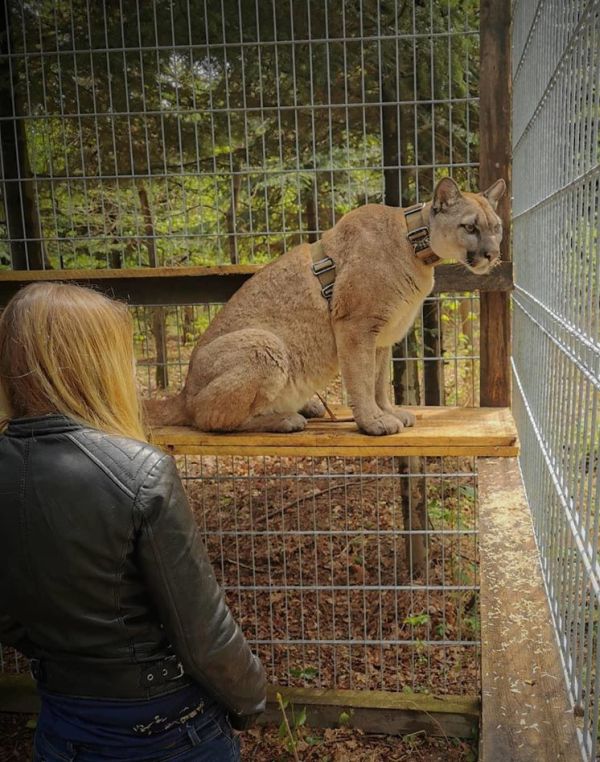 Nubia will now be held temporarily in Chorzów zoo.Łukasz Litewka/Facebook

On Sunday, Kamil eventually handed Nubia over to another zoo, in the Silesian town of Chorzów.

Jolanta Kopiec, the zoo’s director said: “I agreed [for the cougar to stay in Chorzów] because I don't want the animal to get hurt. (…).

“The puma will be in quarantine for 30 days, which will also give the Court time to change its decision about the place of stay from Poznań to Chorzów at the request of Mr. Kamil. 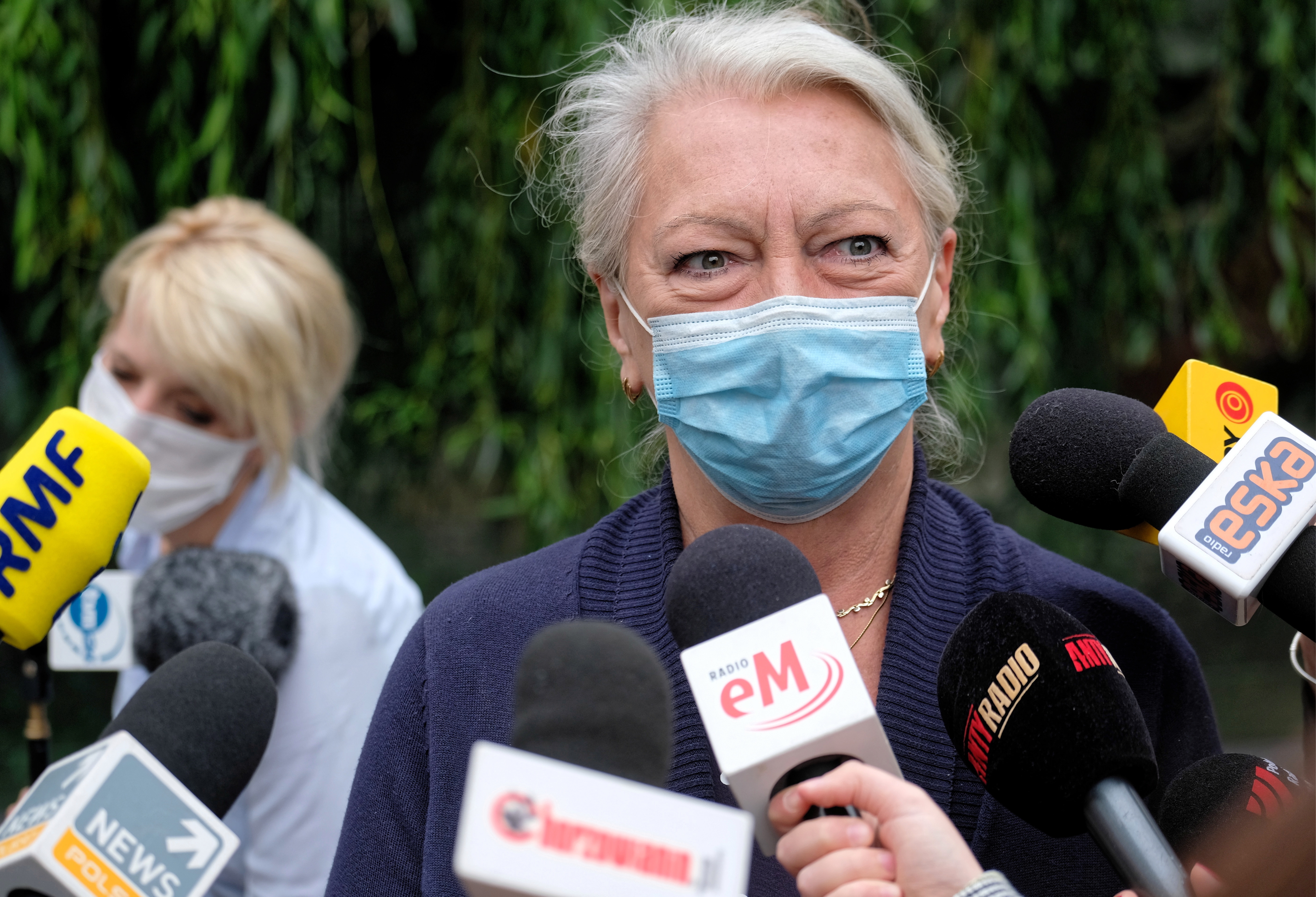 Chorzów zoo director Jolanta Kopiec said: “The puma will be in quarantine for 30 days, which will also give the Court time to change its decision about the place of stay from Poznań to Chorzów at the request of Mr. Kamil.”Andrzej Grygiel/PAP

“Thus, the owner will be able to have contact with the puma working in the Silesian zoo as a volunteer, as long as the decision on the forfeiture of the property is not withdrawn.

“I am very happy that in the Silesian zoo we have the right conditions for the puma to live with us under the careful care of our employees.”

The case has now divided public opinion with some supporting the ex-soldier to those demanding that wild animals should not be kept as pets. 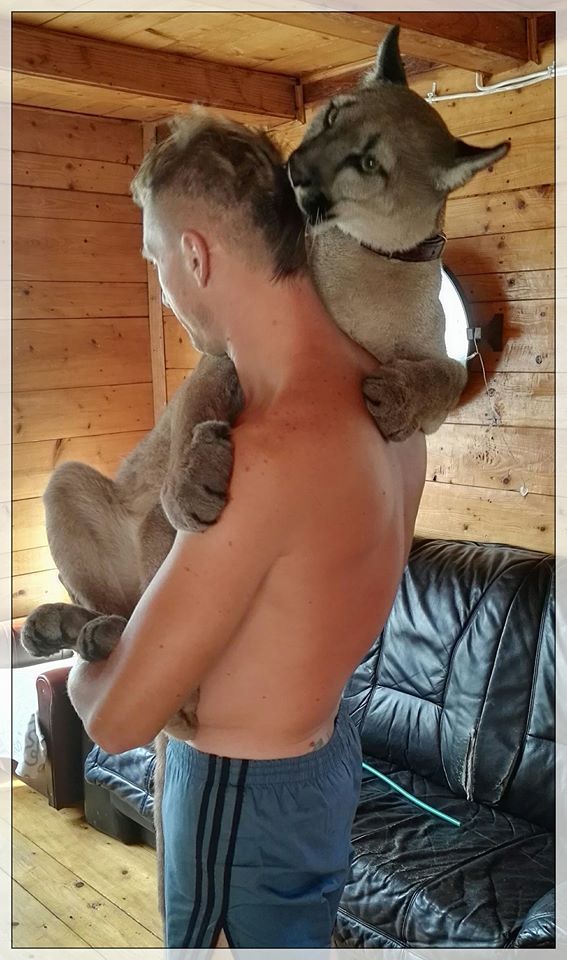 Although Kamil will still be able to see Nubia, he hopes they’ll soon be able to return to normal life.Projekt PUMA – Nubia/Facebook

An online petition called “We demand a pardon and the right to stay at home for Nubia the cougar!” has been signed by over 67,000 people so far.

Kamil S. is also fundraising to cover the costs of legal services he will need.

Another participant of anti-Semitic march arrested

Over 4,300 illegal immigrants detained in Poland over 3 months