A new Tesla investment will be built in Poland this year, Elon Musk has announced.

“Tesla Service Centers & a lot more Superchargers coming to Poland later this year,” the tech entrepreneur tweeted on 28 July, in response to an article about driving a Tesla in Poland.

The news generated excitement on Twitter, with Musk’s remark retweeted many times and receiving over 2000 likes, and in the broader e-vehicle community in Poland. 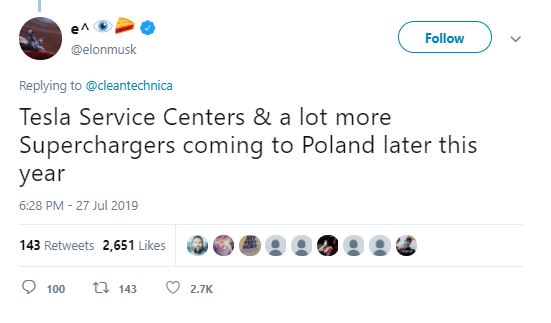 The news generated excitement on Twitter, with Musk’s remark retweeted many times and receiving over 2000 likes, and in the broader e-vehicle community in Poland.Twitter

From its base in Palo Alto, California, Tesla is one of the companies at the forefront of the global move towards electric cars, which are expected to gradually replace traditional vehicles.

The company already has numerous service centres for its cars, largely concentrated in North America and Europe, with plans to open more. In France, for example, it already has them in five locations around the country, with seven most listed as “coming soon” on its website.

As of July, Tesla has one service centre in Poland, in Warsaw. Drivers can schedule a service appointment there using the Tesla app. There are also four Tesla superchargers in Poland, in Poznań, Katowice, Ciechocinek and Kostomłoty, near Wrocław. 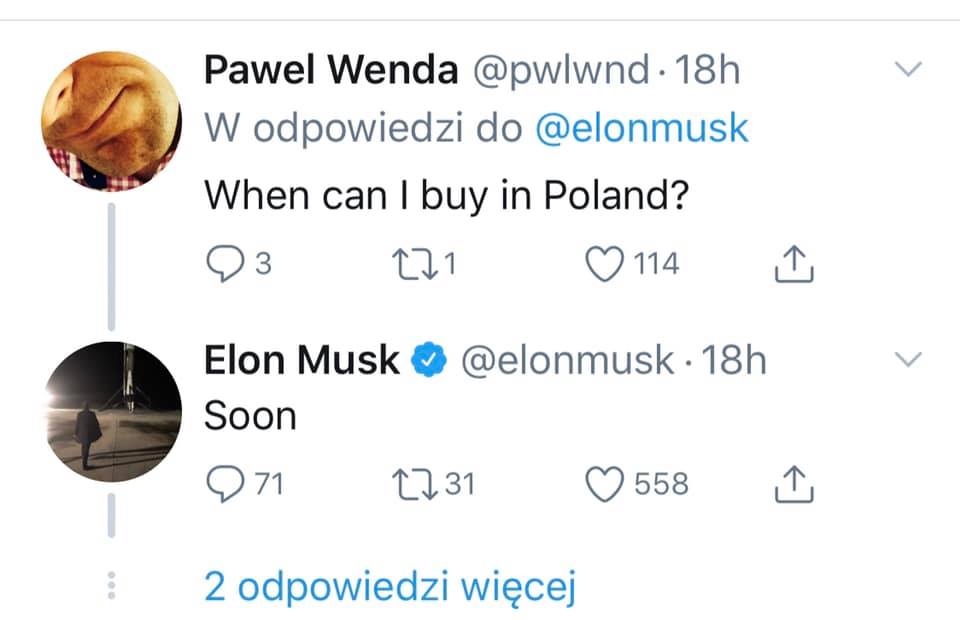 When asked by an excited Twitter user when it would be possible to buy a Tesla in Poland, Musk replied simply “soon”.Twitter

Although no other forthcoming locations in Poland are listed on the company’s website, Musk’s tweet indicates that more service centres will be built in the country soon — along with many more superchargers.

For now, it is unclear where the service centres might be built. Specialist website elektrowoz.pl suggests that at least two locations will be chosen, such as Poznań and Kraków, with Wrocław, Rzeszów and Katowice also possibilities.

The website speculates that the service centres located near the country’s borders could serve Tesla-owners from Poland and neighbouring countries. A service centre in south-western Poland could repair Teslas from Germany and the Czech Republic, too, whereas one in the country’s east could also be used by drivers from Slovakia and Ukraine, it suggests.

Poland carries out over EUR 11 bln in road investments