Disco-vering Disco Polo: a new exhibition puts the spotlight on a genre of music born out of the free-for-all capitalism of the early 90s

Commonly defined by its fast, jaunty synth beats, cliché-riddled videos and cheesy, catchy lyrics, the Disco Polo genre has been disparaged to the point of open vilification. Derided for its lack of finesse and perceived simplicity, for many aspirational Poles it has become a festering source of shame. For others, however, its association with the freedoms brought about following the post-communist transformation lend it a cultural importance that resonates to this day.

Belonging to this last group is Monika Borys, an academic, journalist and author whose research into changing social structures helped untap her fascination with this music. 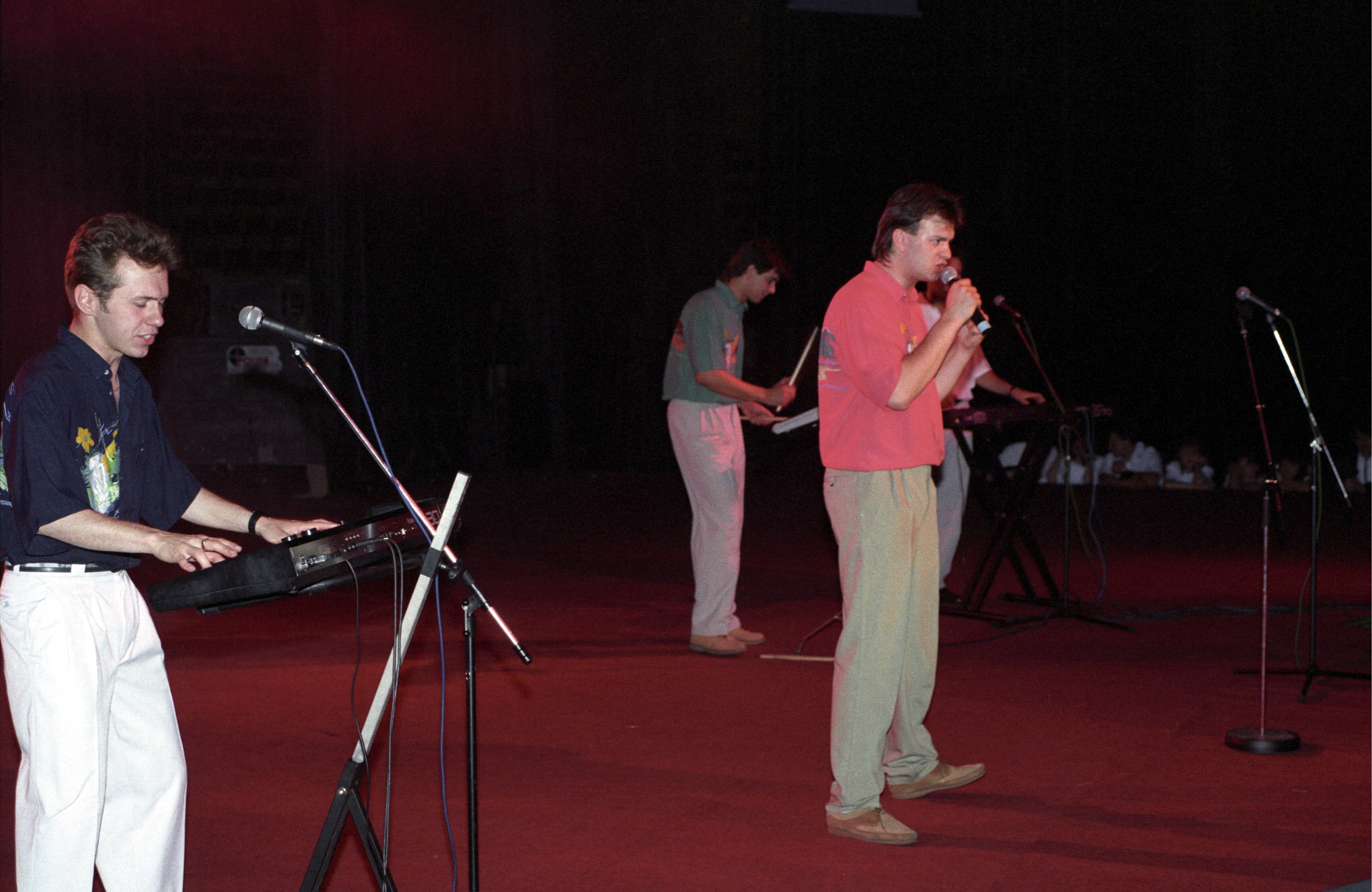 “I was primarily interested in the 1990s,” she says, “but although we often talk about the middle class that emerged from the transformation rarely do we discuss the role of the working class in this era. I was looking for an area of culture that could express this and found it in the form of Disco Polo.”

Resulting from this, a critically acclaimed book followed (Polski Bajer: Disco Polo I Lata 90), promptly tailed by an ongoing exhibition inside The National Ethnographic Museum in Warsaw.

“The exhibition is not intended as a celebration of Disco Polo,” says Borys, “rather a starting point for discussion. We want to show it as an important part of Poland’s transformation and the democratization of the public sphere: created after the country was released from the yolk of cultural planning, Disco Polo would never have appeared were it not for these mechanisms.” 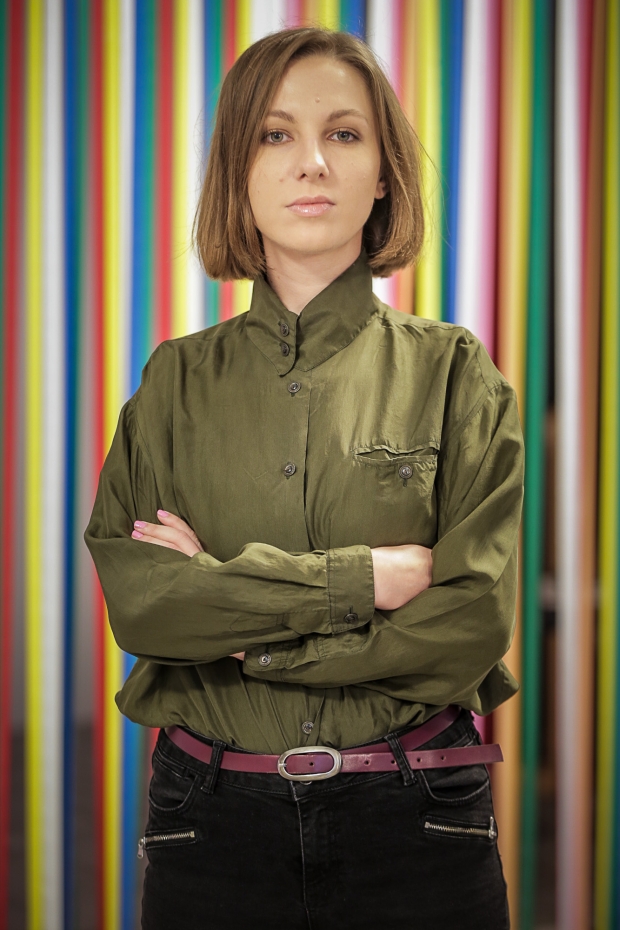 Pioneered by bands such as Bayer Full, Top One and Boys, the sound of Disco Polo soon spread virulently across Poland.

“At the beginning it was all rather unprofessional,” says Borys, “essentially kitschy sounds recorded privately on a small budget.”

But despite this, it caught the zeitgeist. 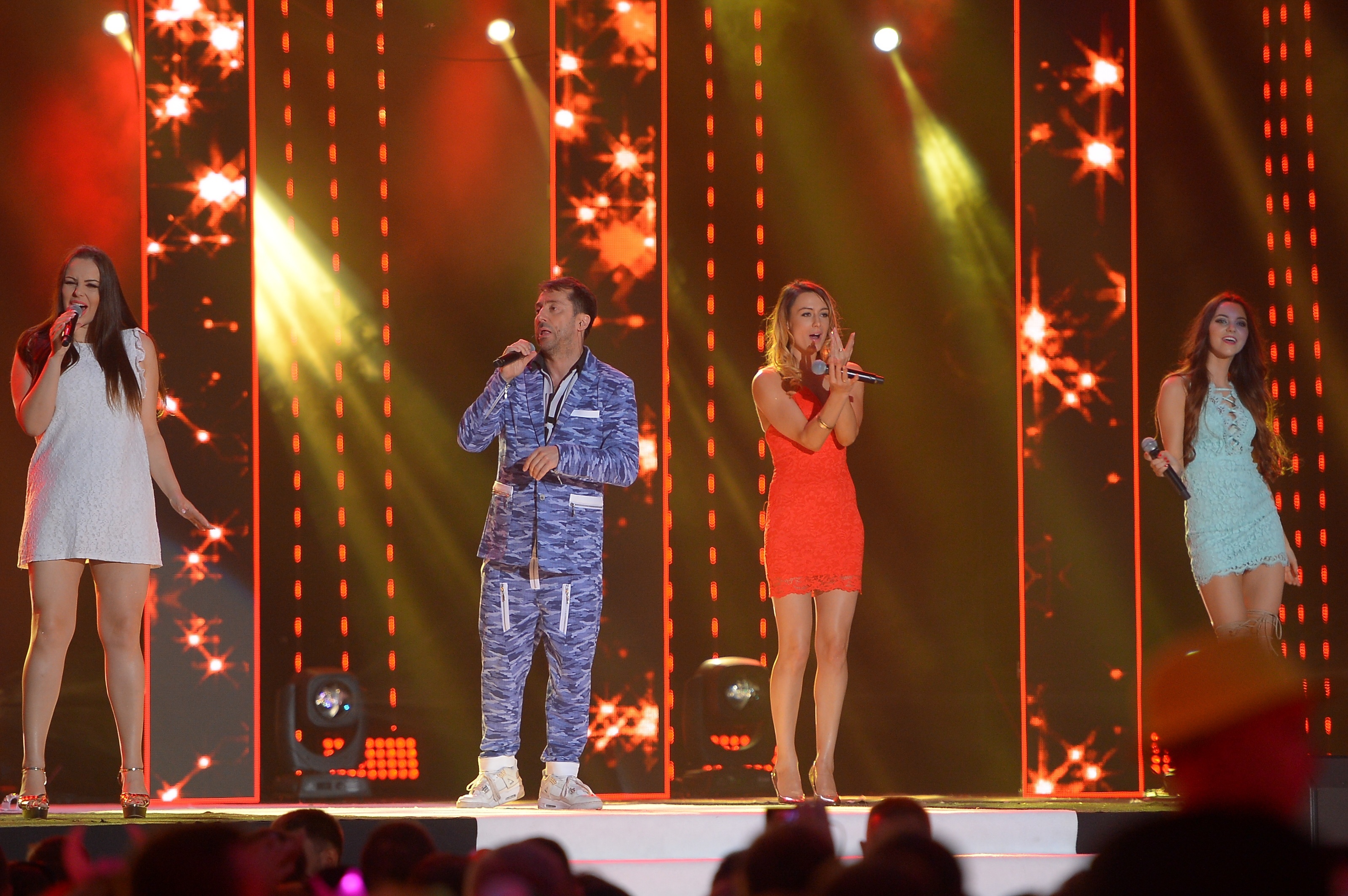 “It’s 1992 in Poland, a country where dreams come true,” write Borys and co-curator Bartosz Wójcik in the exhibition’s introduction. “A Disco Polo empire is in the making. Our collective imagination is being colonized by steamy desires: sprinkled with glitter, our pockets lined with gold, we recline underneath palm trees; we fall head over heels in love, as opportunities knock.”

Freed from the economic shackles and social inhibitions of communism, and committed to a headfirst dive into turbo capitalism and wild excess, it was to this background that Disco Polo thrived as the soundtrack of 90s Poland. 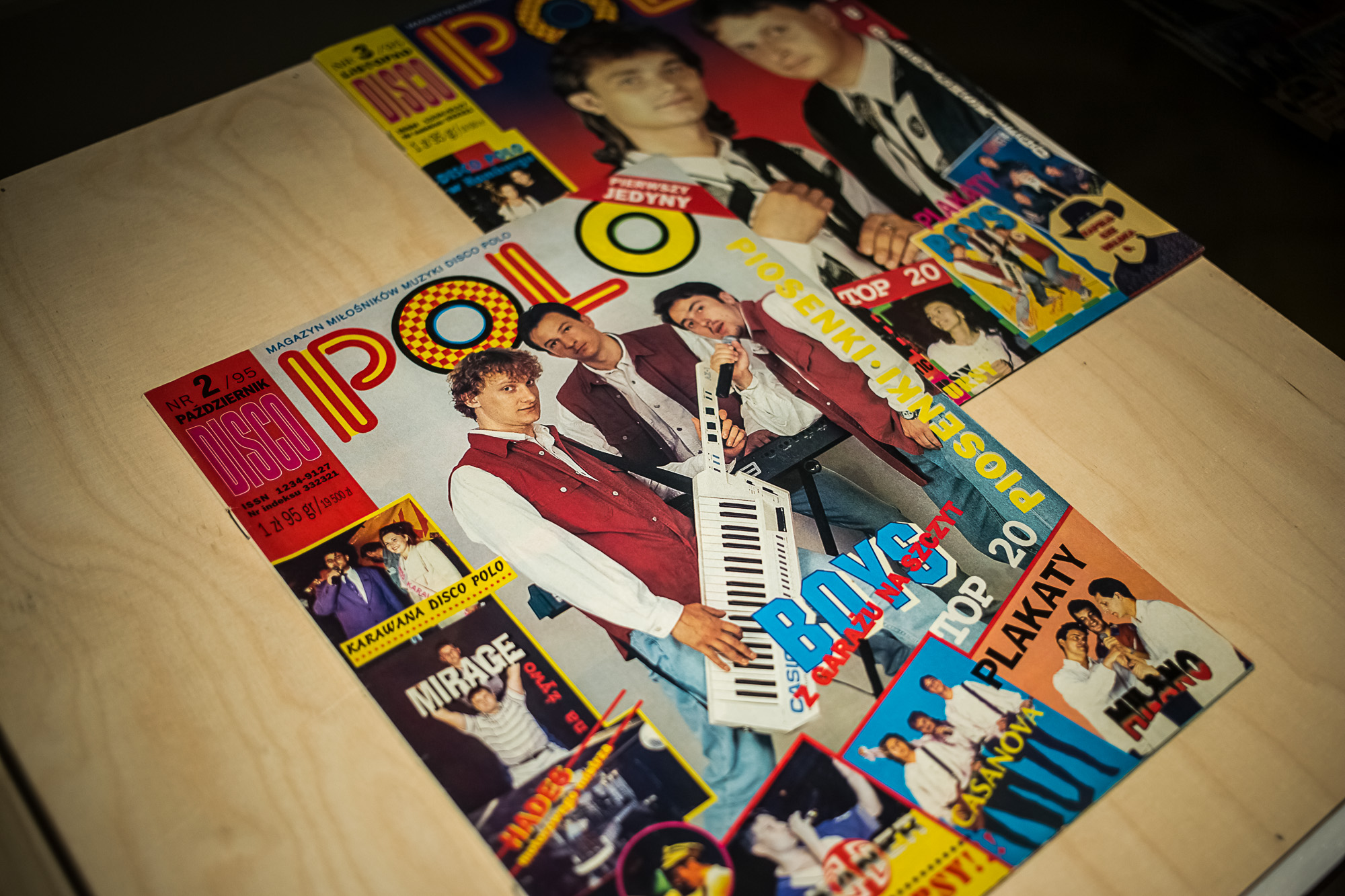 The exhibition wants to show the music is as an important part of Poland’s transformation and the democratization of the public sphere.Kalbar/TFN

When, in 1991, Boys – a band hailing from a North Eastern village by Ełk – released a track about freedom and liberty, it became anthemic of the time, played everywhere from harvest festivals to even, reputedly, at Lech Wałęsa’s birthday.

The Podlasie region became the epicentre of this sound, soon joined by satellites of Warsaw such as Żyradów. Then known as ‘sidewalk music’ (recorded in garages, the lo-fi cassettes were primarily sold at pavement stalls and open-air bazars), the Palace of Culture hosted a Festival of Popular & Sidewalk Song in 1992 at which several amateur groups from Poland’s peripheries performed: the genre’s mass popularization was now well underway.

Still, the music faced resistance. “Although they conformed to the script of the capitalist success story,” says Borys, “Disco Polo artists were regularly ignored by the elites.” 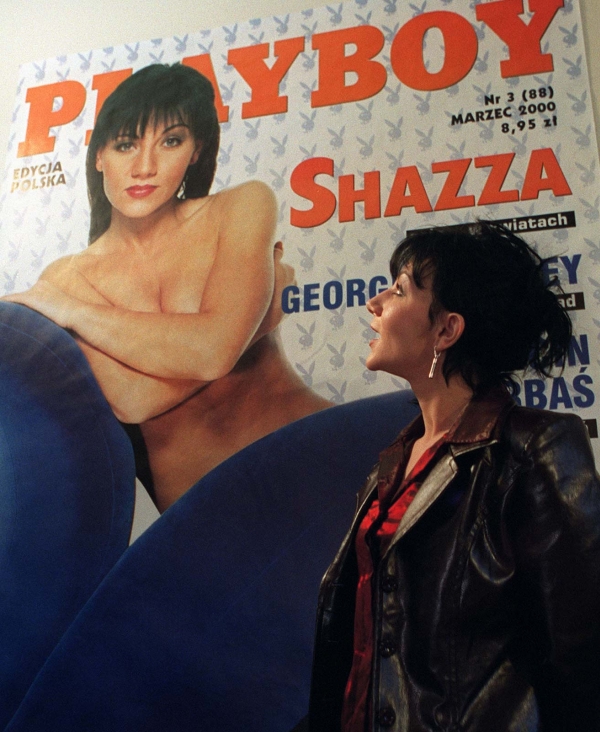 Shazza, known as the ‘Queen of Disco Polo’, helped raise the profile of the genre when she appeared in Playboy.Jacek Turczyk/PAP

Having been roundly rejected by mainstream labels, Sławomir Skręta, a collaborator with a band called Fanatic, decided to do it by himself and founded Blue Star, the country’s first record label dedicated to this new Polish sound. On his behest sidewalk music found itself rebranded as Disco Polo and a phenomenon was born.

“Although influential media initially made a concerted effort to categorize Disco Polo as an error and downright fiasco,” say Borys and Wójcik, “the music made waves and became an unstoppable force.”

With the 1994 debut of a weekly Polsat TV program called Disco Relax (a title, incidentally, shared by the exhibition), Disco Polo now had a nationwide platform. At times, it’s reported that up to eight million viewers were tuning in to catch the latest tunes. 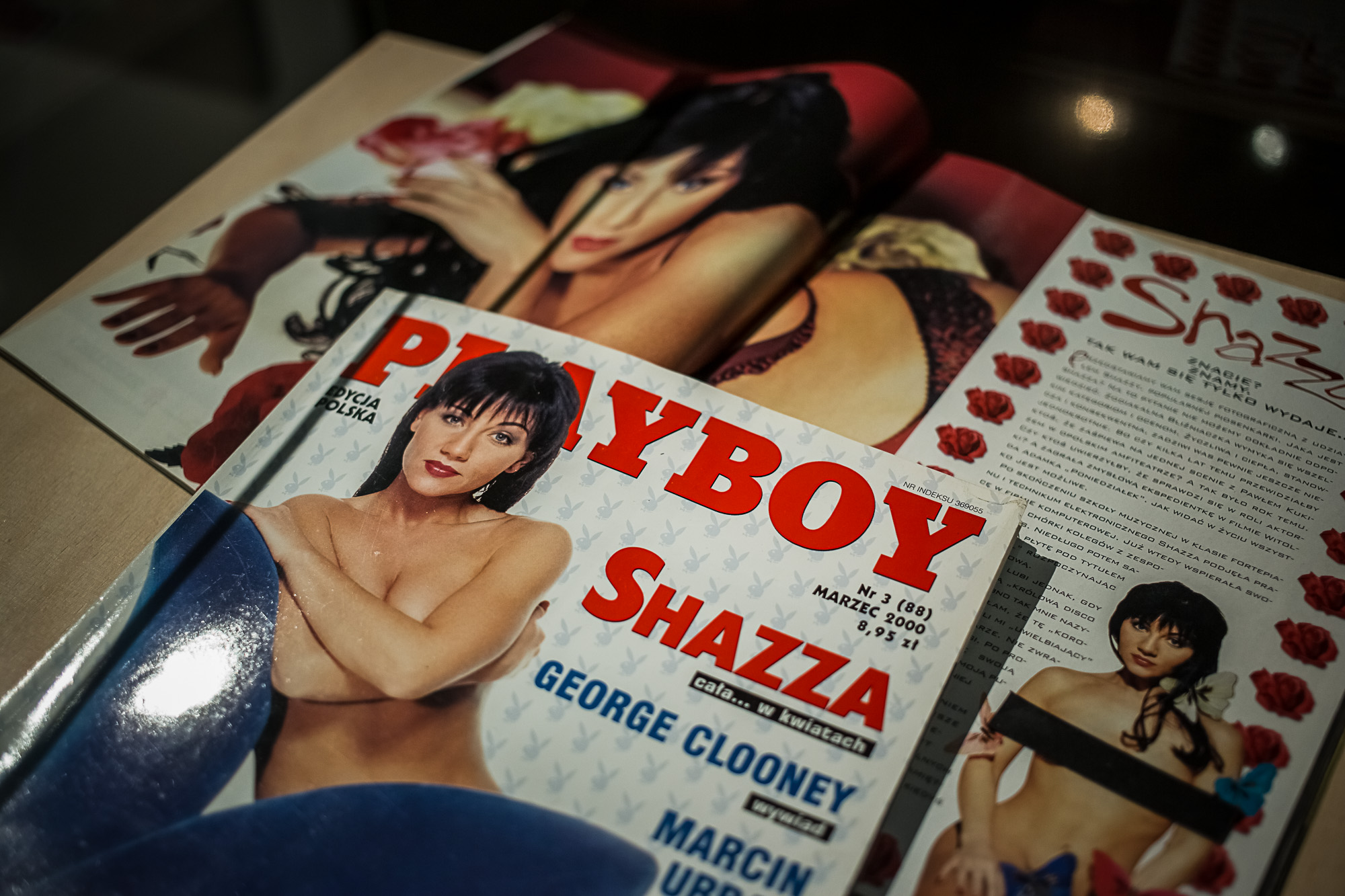 But the Playboy spread failed to show that she was a strong and empowered artist, says Borys.Kalbar/TFN

The new millennium saw interest in the genre decline, yet it has remained stubbornly popular in both backwaters and resorts. Further, its waning popularity appears to have been halted by a new wave of artists over this last decade – with over 116 million views since being published on YouTube in 2014, the song Ruda Tańczy Jak Szalona by Czadoman stands as a case in point.

The story is by no means over, but for the majority of people the glory years of Disco Polo will always remain entrenched in the 90s and it is this period – despite references to its earlier roots in 70s Polish showbiz – that is the principal focus of the exhibition. 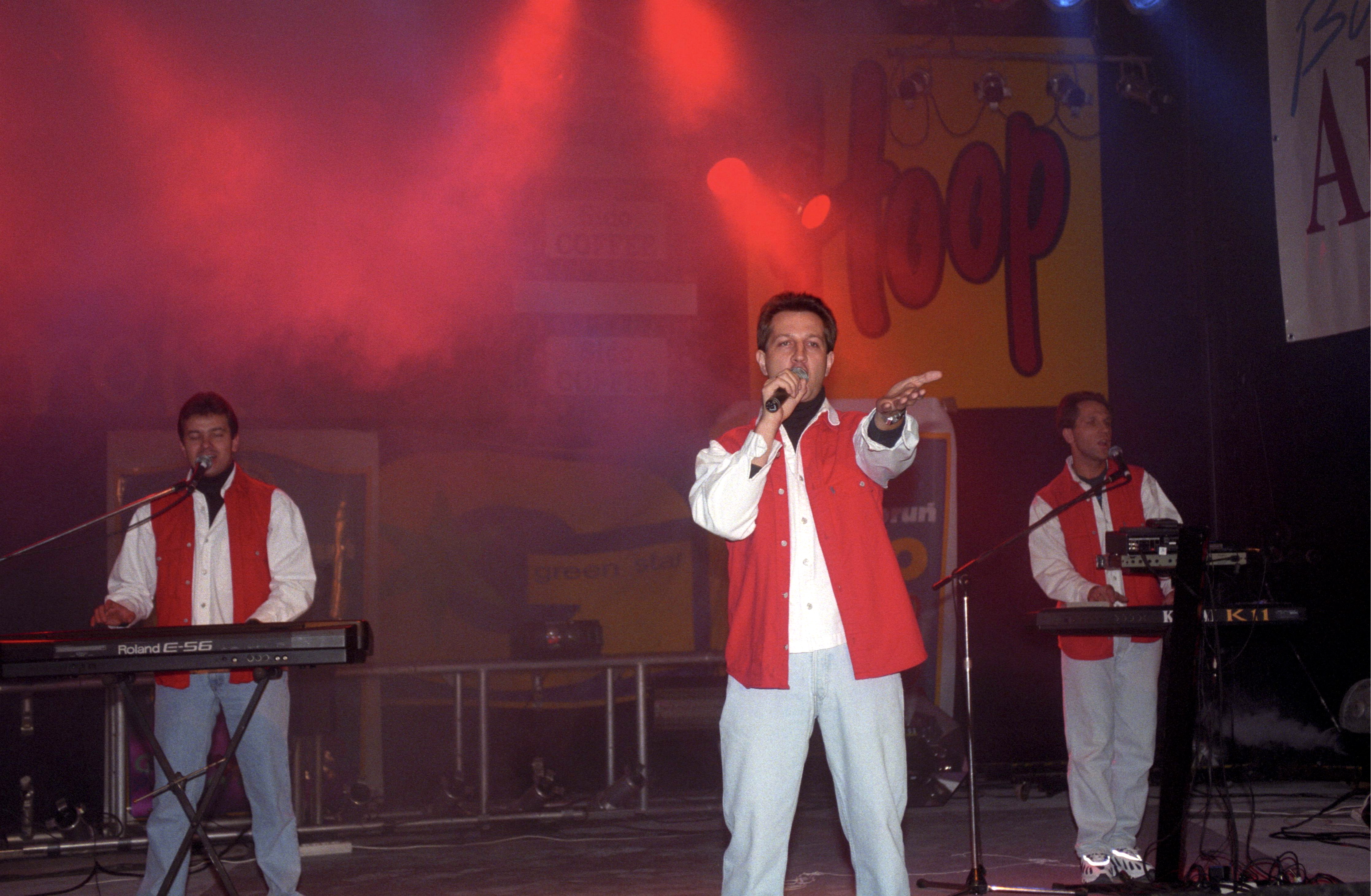 Milano perform in 1996. The 90s are regarded as the golden era of Disco Polo.Zdzisław Lenkiewicz/PAP

Rich in imagery correlating to the aesthetics of the genre, there is more to the exhibition than simply headsets, music mags and cassette tapes. With so many lyrics given over to “sunnier climes, the USA, holidays, wealth, money, sex, success, ideal love and romantic elation”, the exhibition – compact though it is – bristles with canvases and glass paintings depicting, among others, JR Ewing carrying an alligator and alpha jungle animals cavorting with loosely-clad women.

And on the subject of the latter, women play a central role at Disco Relax. “Though Disco Polo was predominantly male in its gender identity,” says Borys, “women were also active in shaping the genre with several making it big, creating expressive stage personas. 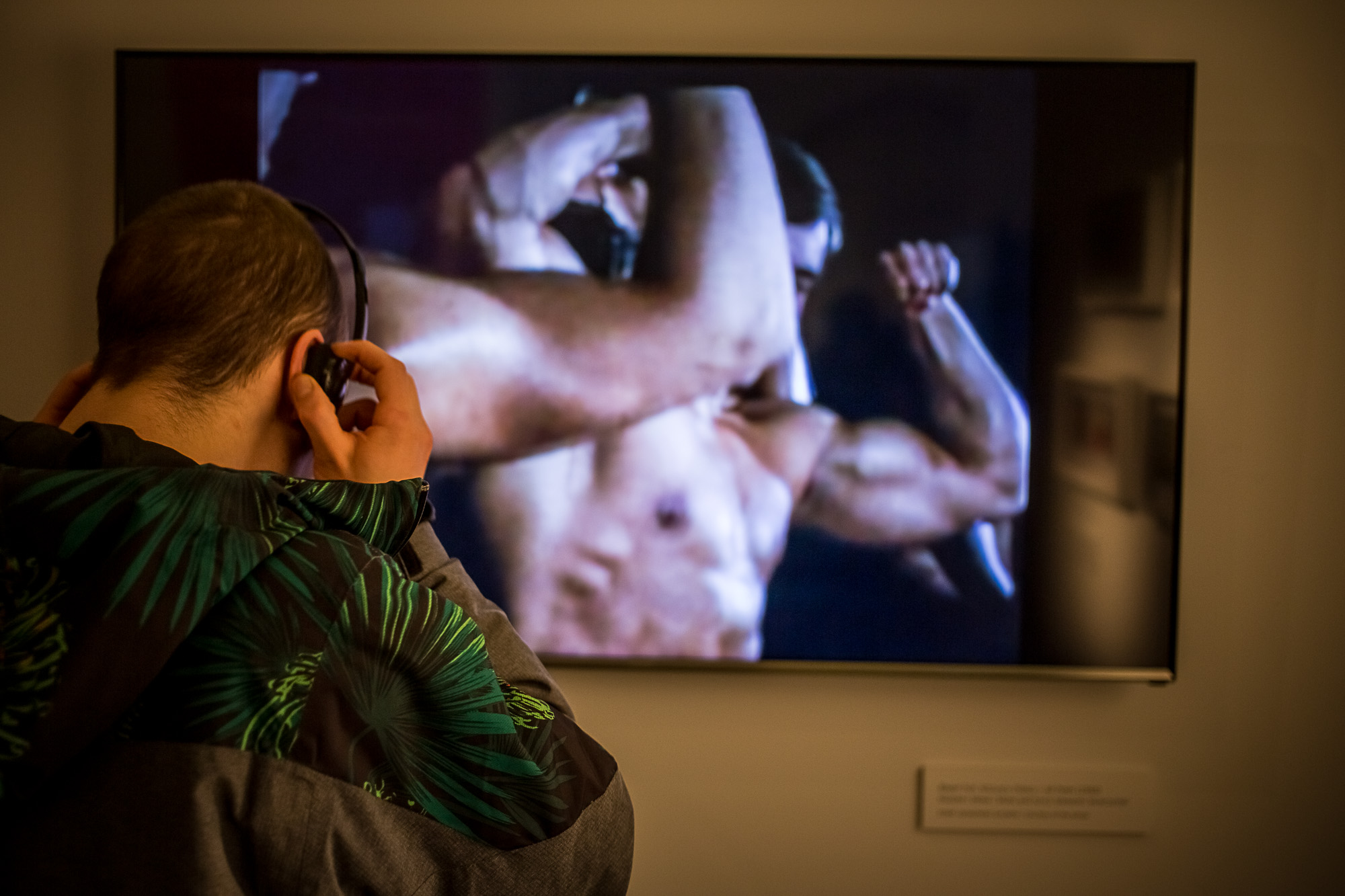 Rich in imagery correlating to the aesthetics of the genre, there is more to the exhibition than simply headsets, music mags and cassette tapes.Kalbar/TFN

“In their songs,” continues Borys, “love is neither sentimental nor romantic, but first and foremost sensual. Their Disco Polo manifestos are a refreshing return to materiality and carnality, which is why the heart of the exhibition beats to the rhythm of female artists.”

Of these, none were bigger than Shazza. Widely regarded as the “Queen of Disco Polo”, her appearance in the third ever edition of the Polish edition of Playboy remains the publication’s best-selling issue to date. 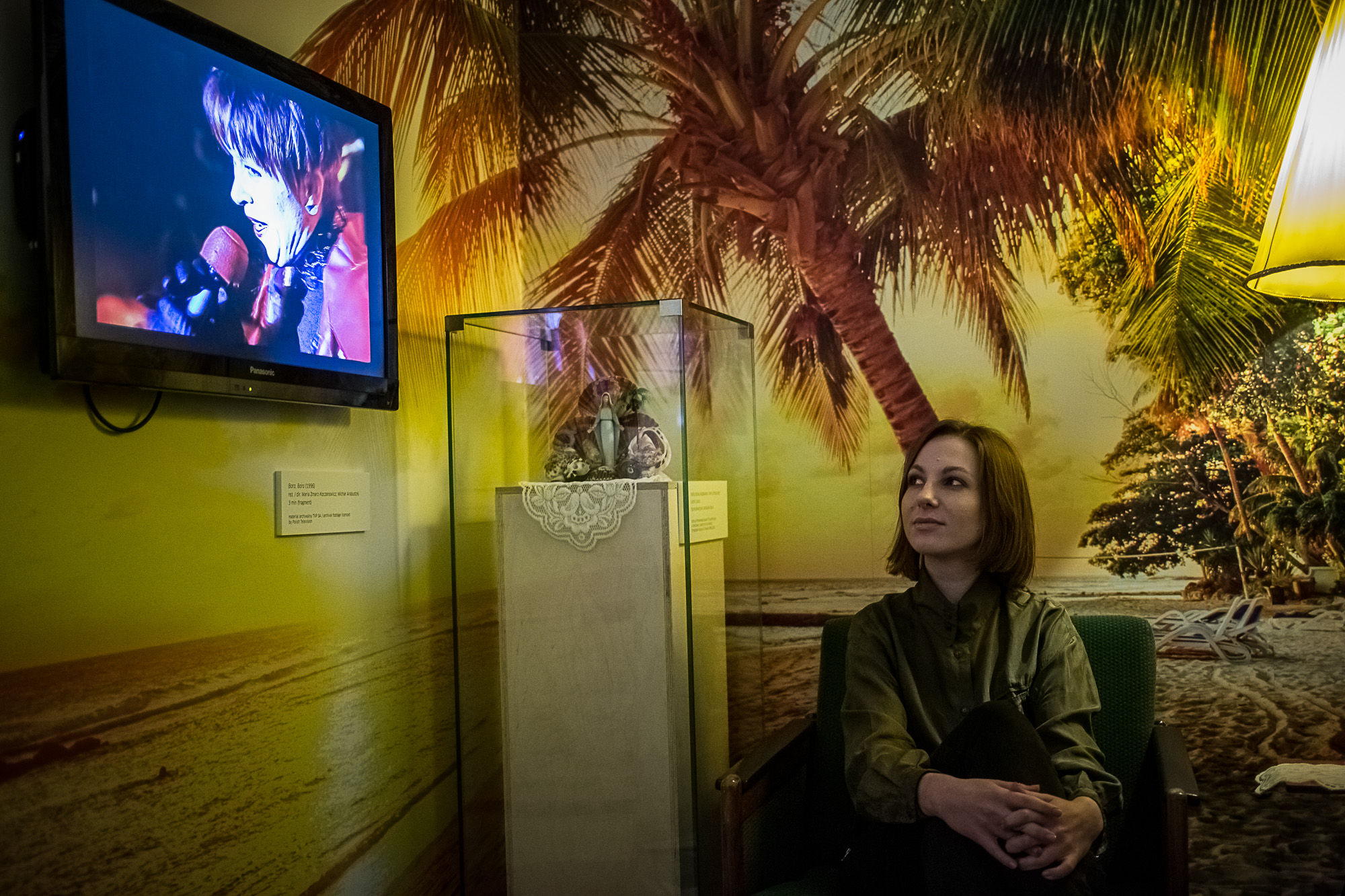 “Although they conformed to the script of the capitalist success story,” says Borys, “Disco Polo artists were regularly ignored by the elites.”Kalbar/TFN

“Unfortunately,” says Borys, “she was depicted as quite a demure character among butterflies and flowers – it wasn’t really an accurate representation of the strong, empowered artist that she truly was.”

This balance though is redressed at the exhibition, not least through the screening of some of her landmark videos. “Nearly always,” says Borys, “they show her metamorphosis from rags to riches; she was the very personification of the transformation that occurred.”

Asked as to her favourite exhibit, Borys is emphatic:

“I came across Shazza’s Miłość i Zdrada video on YouTube four years ago and was immediately struck by it,” she says. “Straight away I thought this example of visual culture belonged in a white cube gallery.” 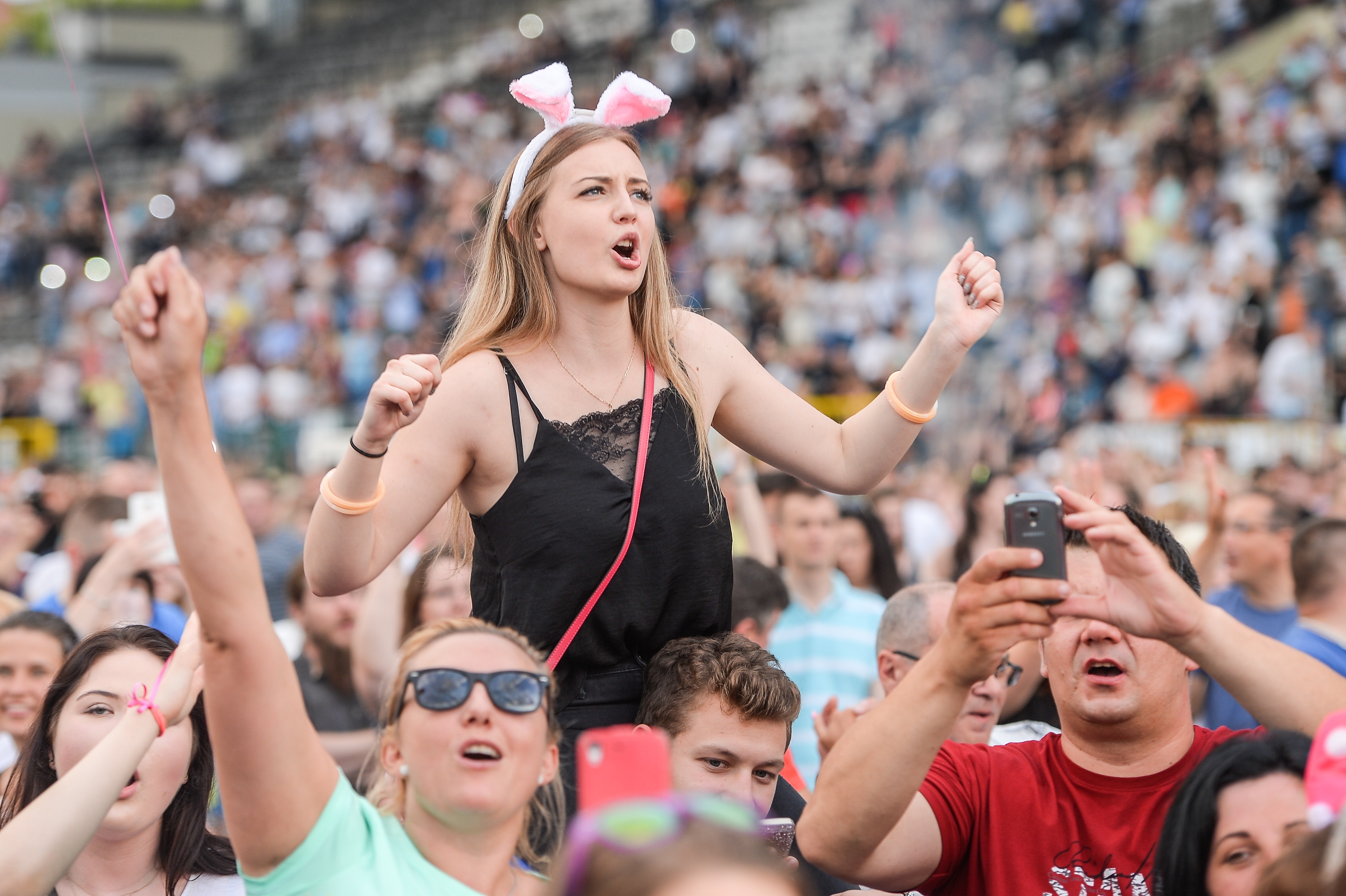 Still pulling in the crowds. People party away at the 25th anniversary gala in 2017.Archiwum Leszczyński/PAP

Released at the time of the redenomination of the złoty, it features the singer dancing alongside historical characters found on both the outgoing and incoming currency.

“It’s absurdist and surreal,” says Borys, “but it also shows that there was also so much more to Disco Polo than just love songs, especially during the 90s. It provided a real commentary as to what was happening all around us.”

European Heritage Days to open in Poland this weekend