On anniversary of Poznań Uprising, mystery still surrounds death of boy found in Secret Police garage with bullet through his chest

When Roman Strzałkowski died of a gunshot wound on June 28 in 1956 in Poznan, he was one of 18 children to die that day in the hail of bullets meant to crush what was then the largest protest against the Poland’s Communist government.

Aged just 13, Roman became the tragic symbol of the June protests in which a crowd of approximately 100,000 gathered in the city centre to demonstrate against the miserable conditions that Poland’s socialist experiment had produced for ordinary workers.

Roman had been sent to the shops by his mother Anna to buy ham. She knew that something was happening in the city and told her son that he must stay away. 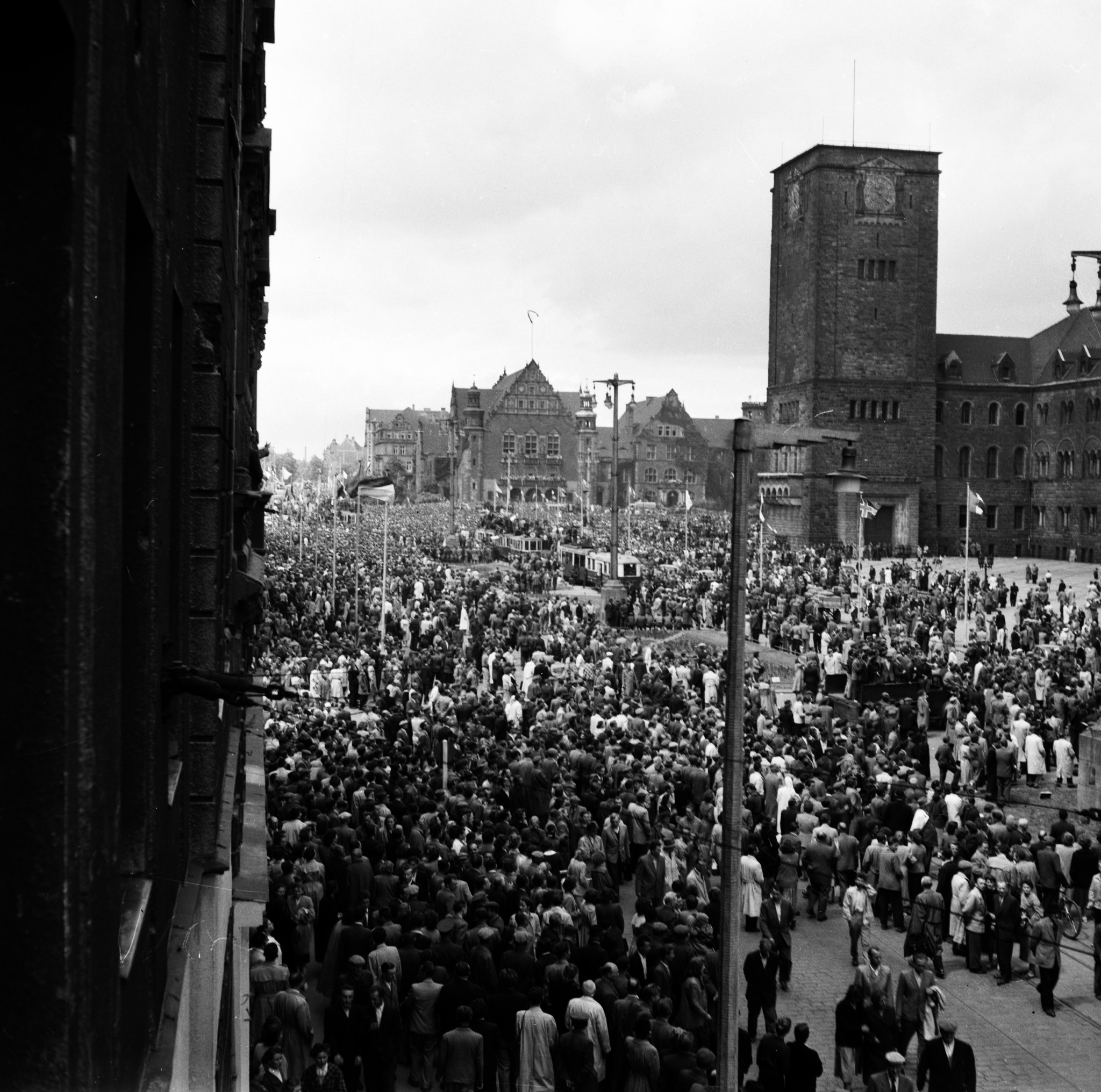 The protest was the first major anti-communist protest to take place in Poland following the imposition of communism. PAP

However, instead of carrying out his errand, he was drawn by the spectacle of a mass demonstration the scale of which must have overwhelmed and excited the impulsive boy. He never came home.

About 400 tanks and 10,000 soldiers were ordered to put on a show of force, the finale of which was the gunning down of anywhere from 57 to over 100 protestors, depending on various sources. 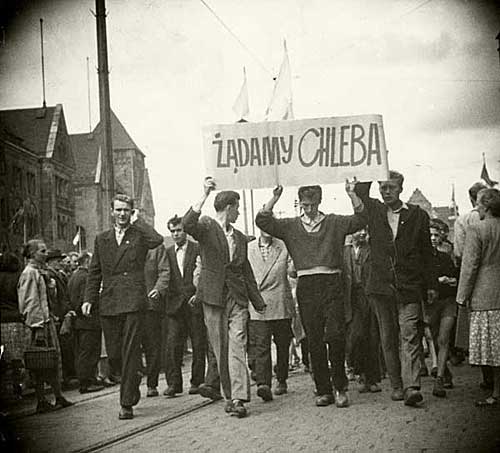 Protestors were demonstrating against the miserable conditions that Poland’s socialist experiment had produced for ordinary workers. Public domain

Roman’s lifeless body was discovered later in the afternoon on the grounds of a Security Department transport base sitting upright in a chair with a gunshot wound in his chest.

Speculation has raged ever since as to how the boy died. Some researchers say that he died from a stray shot or a ricochet. Others believe that he was shot deliberately from a neighbouring security police building. 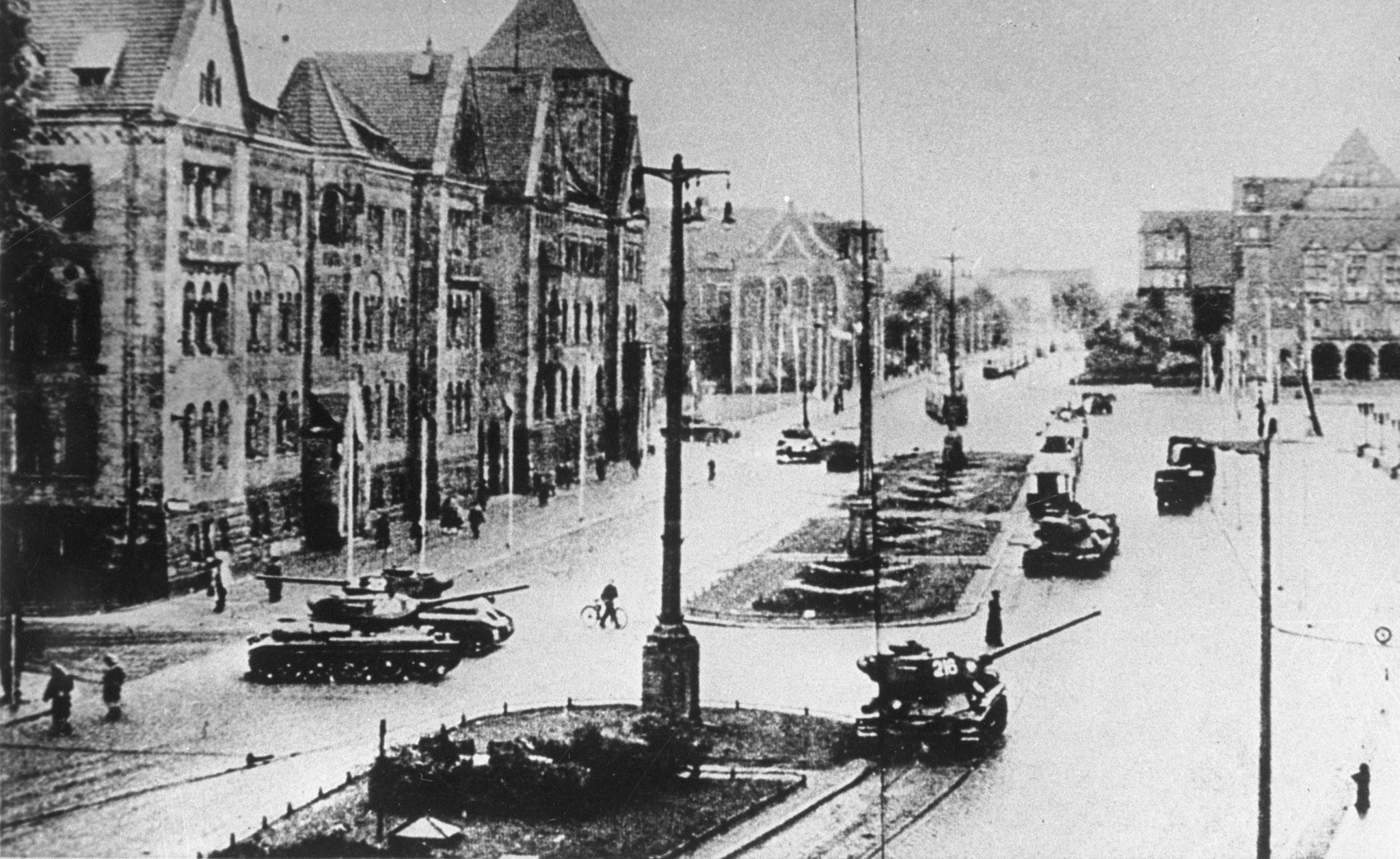 Around 400 tanks and 10,000 soldiers moved in to suppress the demonstration. PAP

Roman’s parents were convinced that their son was murdered by security police because he had picked up a banner with an anti-government slogan and joined the protest. They claimed that his body was dumped at the transport base only after the bleeding had stopped. In support of this theory is that no pool of blood was found there.

A key figure in explaining the circumstances of Roman’s death is Teresa Szmyt, who discovered the boy’s body.

In a trial in 1956 at which prosecutors tried to push responsibility for the killings onto the protestors, Szmyt testified that she discovered Roman at the transport base where she was sheltering from the clashes nearby. 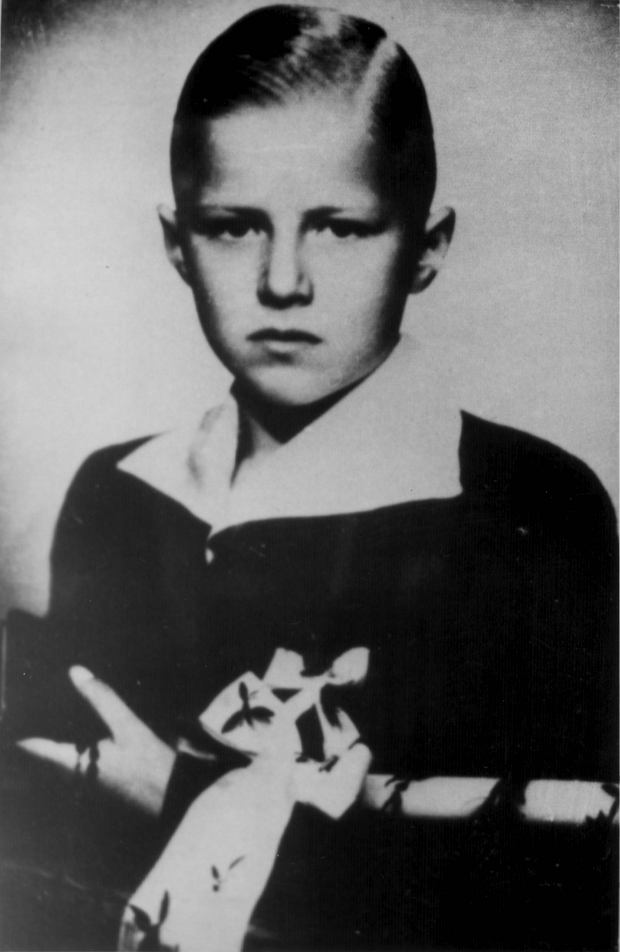 Aged just 13, Roman became the tragic symbol of the June protests in which a crowd of approximately 100,000 gathered in the city centre. Poznań Uprising Museum

The following year, Szmyt was put on trial for submitting false testimony, during which she changed her version of events several times, saying that the boy had been shot on open ground, later changing to say that it happened inside a garage. 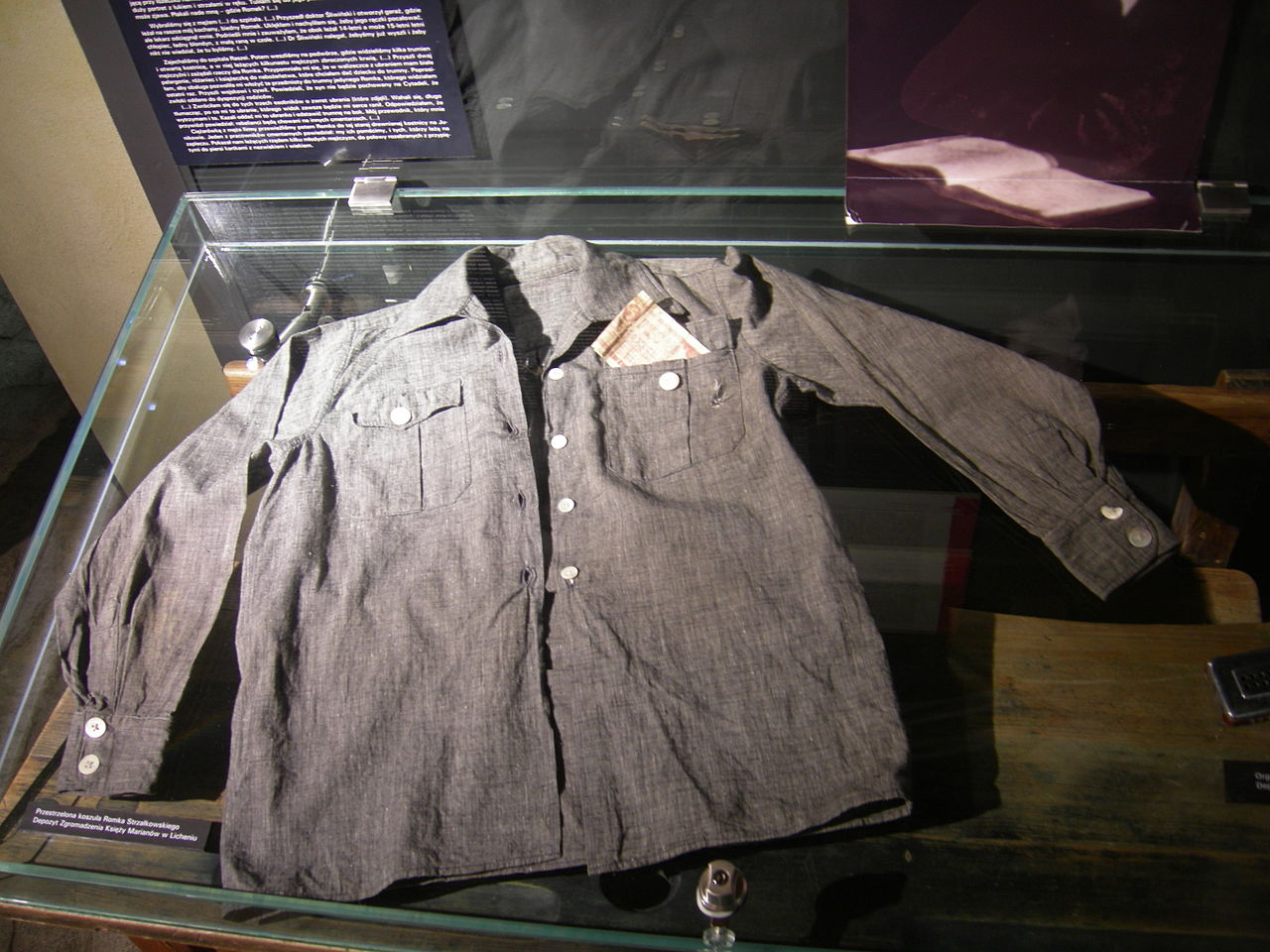 The shirt Romek Strzałkowski was wearing when he was murdered, a case which has remained unsolved to this day. Klapi

Researchers have claimed that Szmyt was in fact a security officer herself and that her testimony was directed by her superiors.

A forensics report from the time added more grist to the mill. Its analysis of the fatal bullet’s trajectory suggested that in normal circumstances the boys arm should also have shown signs of injury. This was seized upon by the boy’s father, Jan, who claimed that he must have raised his arms in surrender and was then executed at close range. 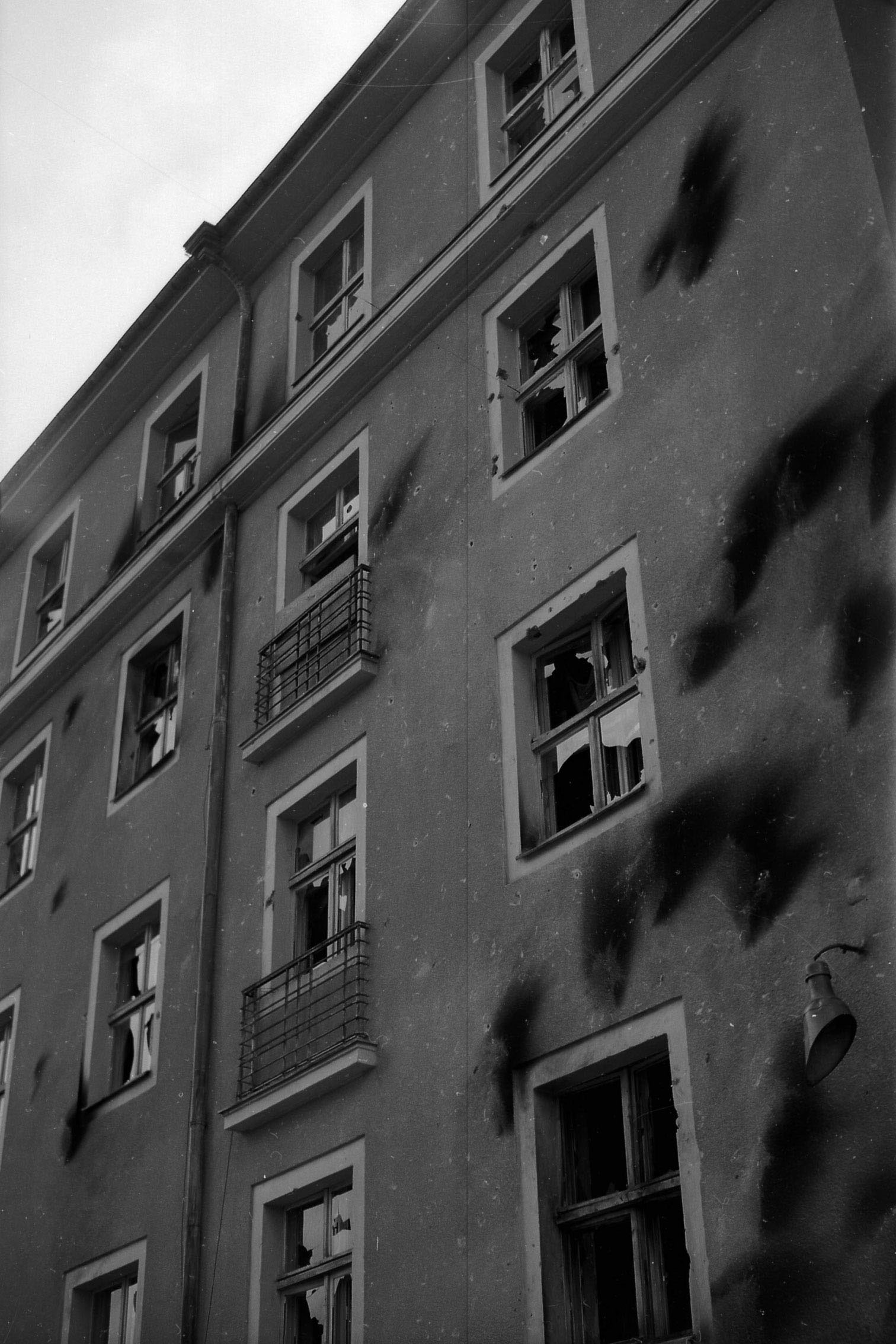 The 13-year-old’s body was found close to the offices of the secret police. During the demonstration the offices were attacked and set on fire by protestors. Wojciech Kondracki/PAP

Roman’s parents persuaded the prosecutor’s office in Poznań to bring charges against Szmyt. Unexpectedly, however, the proceedings were discontinued without proper justification.

The parents made further attempts to get justice for their son, but they were met with a wall of silence. Worse still, they were subjected to surveillance by the security police, who followed and photographed them.

Stories have circulated in Poznań that in one incident Roman's mother was bundled into a car by force, and his father was shot at while sitting by his son's grave.

Poland’s Institute of National Remembrance reopened the case four years ago, but it got no closer to solving the mysterious death. 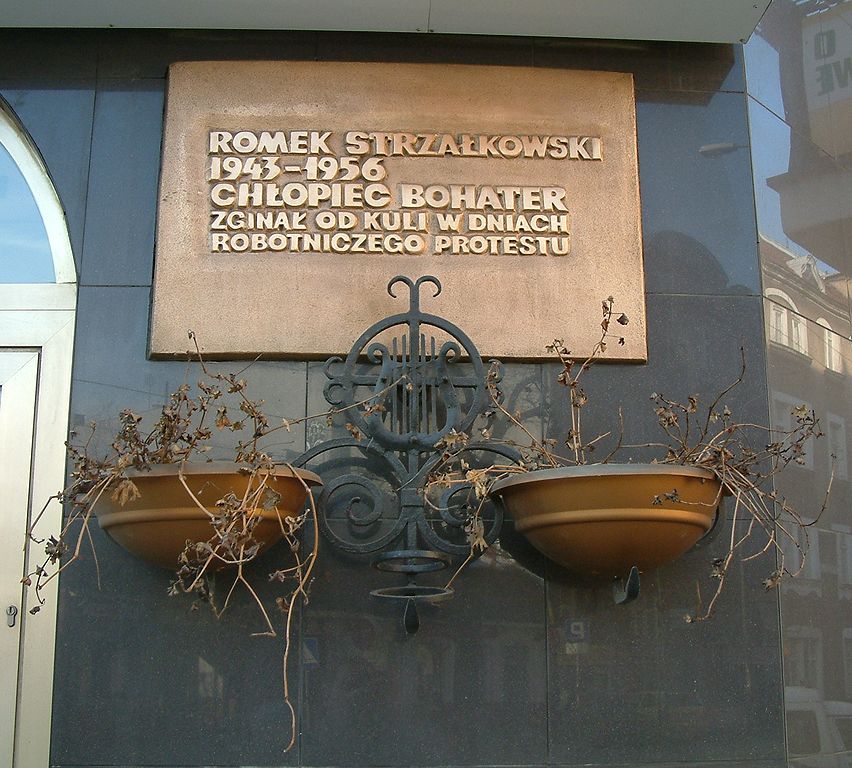 Today a simple plaque stands close to where the boy died. Radomil talk

One of the institute’s prosecutors, Mirosław Sławeta, reported inconclusively: “It is very likely that Roman Strzałkowski was fatally shot on 28.06.1956 between 12.30 and 15.30 (most likely around 15.30) in the Security Department garages […] At present, however, it is not possible to unequivocally state whether he died as a result of a deliberate or accidental shooting.”

On the role of Teresa Szmyt, he added, “It is most likely that Teresa S. knew how Roman died, but for some reason she never told the truth.”

Even these partial findings came too late for Jan and Anna. They never got over the tragic death of their only child and died not knowing the truth about his fate.

Internationally acclaimed composer whose work was brought to a wider audience through film and television passed away in Kraków on Sunday at the age of 86.

Number of confirmed coronavirus cases in Poland rises to 17