A tormented genius; an enigma; a chess grandmaster; and, a Polish Jew – Akiba Rubinstein was all of these and more. 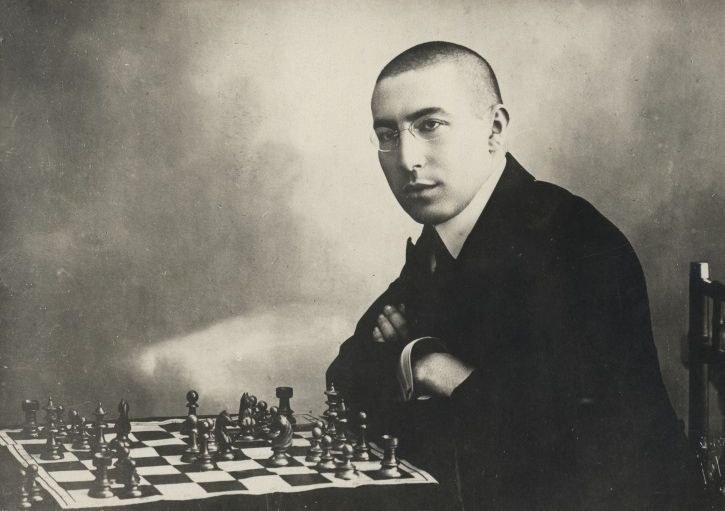 When Rubinstein discovered chess as a teenager it was to prove the seminal moment of his life.Wilhelm Willinger

Now, as Netflix viewers the world over revel in binge-watching The Queen’s Gambit, it’s worth pausing to remember one of the greatest world champions that never was: a player that held the planet in his palm until fate intervened.

Thought to have been born on this day in 1880 (though other sources cite December 12th, 1882), Akiba Rubinstein started life in Stawiski, a rural town in Podlasie where he was largely raised by his grandparents following the death of his father. 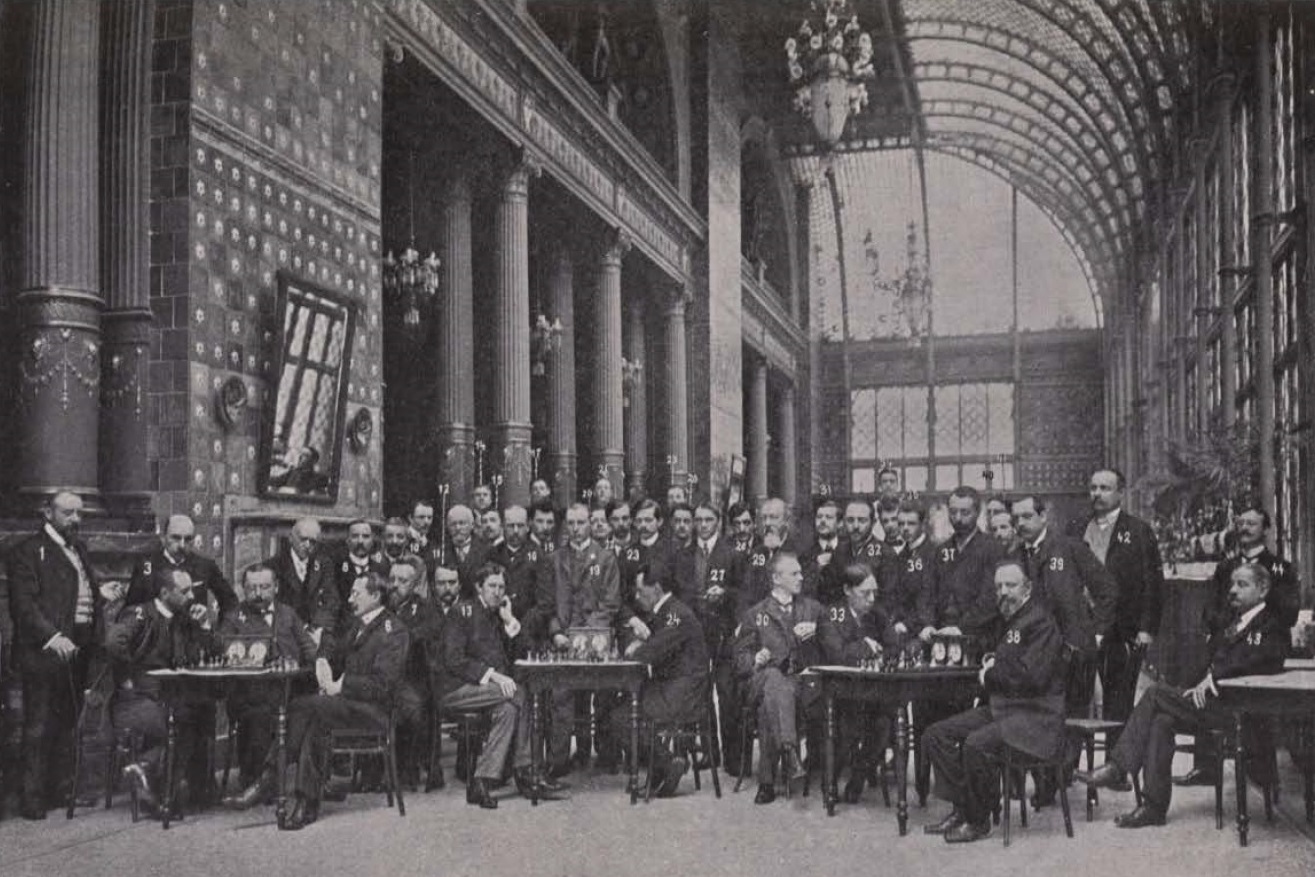 Between 1907 and 1912 Rubenstein was on the path to world domination, beating such greats as world No. 1 Emanuel Lasker. Rubenstein is pictured as number 15. Public domain

Despite the often varied versions of his biography, all agree it was a rabbinical career that awaited Rubinstein, and as such he was sent to study at a yeshiva in Białystok. However, as he advanced into his teens, he dropped out amid concerns that he too would contract TB, a disease that would account for ten of his siblings.

With time on his hands, Rubinstein discovered chess at either the age of 14 or 16 (with individuals frequently manipulating their birth details to avoid Russian military service, such discrepancies in age were commonplace at the time), learning quickly from a 17th-century Calabrian textbook written by Gioachino Greco. 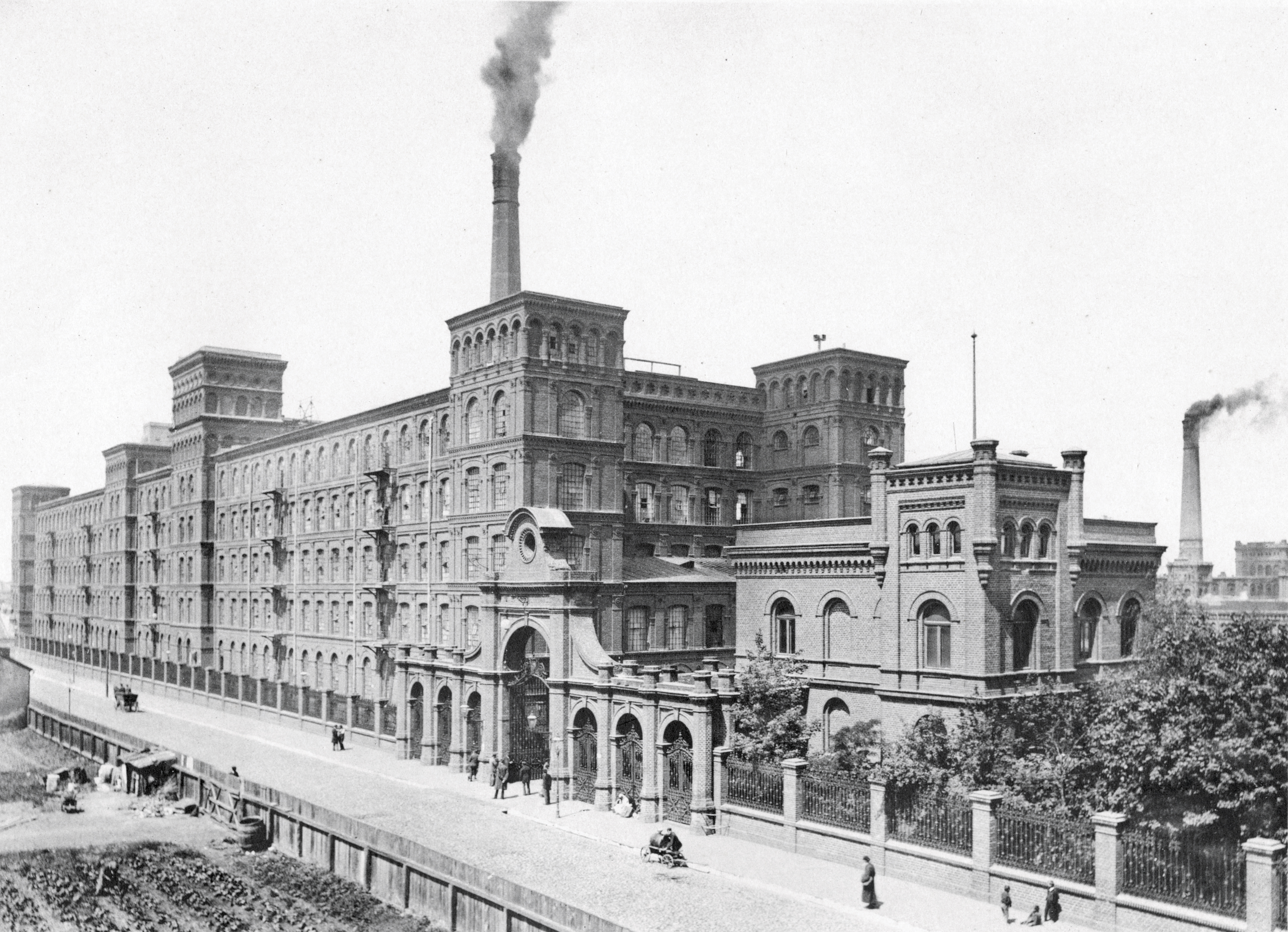 Rubenstein moved to Łódź which in the Tsarist era was an international chess hub, not just in the Congress of Poland, but within the entire Russian Empire.Public domain

It was to prove the seminal moment of his life, and thereafter Rubinstein became wholly committed to the game, burying himself in smoky venues such as Stein’s where chess was an endemic part of the local café culture.

Enchanted and entranced by the game, his late introduction to chess did little to stymy his preposterously rapid progress. 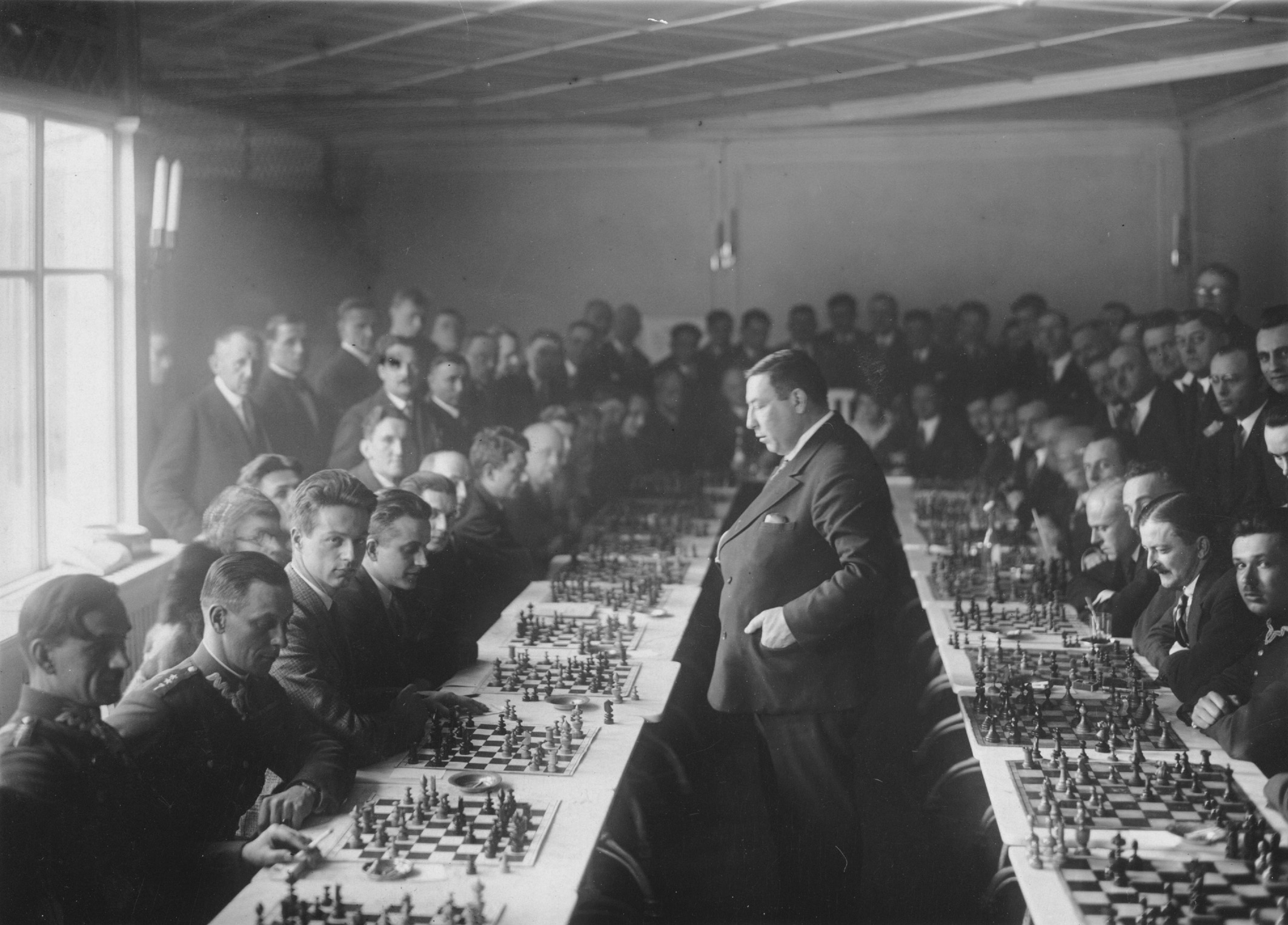 “I felt a talent and an interest in chess, moreover I have an extremely good memory,” he said in a 1926 interview with an Austrian chess periodical. “I felt myself aesthetically connected to the game. It wasn’t only an art, but also about knowledge – victory is based on science.”

Swiftly rising to become the dominant force on Białystok’s chess circuit, Rubinstein recognized that to realize his dream of playing professionally he would need to prove his mettle by moving to Łódź. 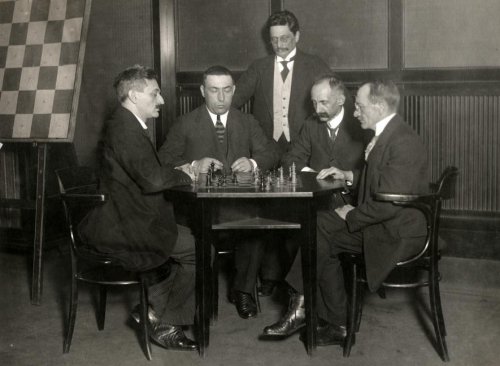 In 1912, Rubenstein (pictured sitting middle) achieved a world first when he triumphed at five successive major international tournaments in the space of a year.Public domain

Rubinstein arrived in the early 20th century (again, exact years are disputed) to find a seething industrial city in the midst of its greatest boom. Defined by its smoking chimney stacks, grinding factories, crowded slums and wedding cake palaces, it was a melting pot of cultures. Seen as the crossroads between East and West, this rich diversity was reflected in a busy cultural life in which chess played a major role.

In much the same way the likes of Manchester and Madrid are considered meccas of modern football, Łódź in the Tsarist era was an international chess hub. It was practiced everywhere: in parks, clubs, cafes, workplaces and homes. This was the No. 1 chess city not just in the Congress of Poland, but within the entire Russian Empire. 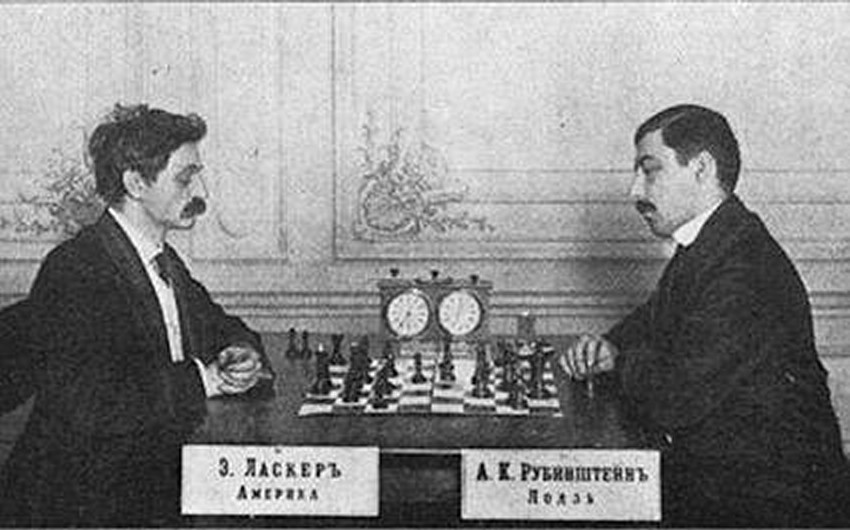 Rubinstein (R) refused to be recognized as a representative of Russia and instead insisted on playing with a nameplate identifying himself as a citizen of Łódź.Public domain

Rubinstein relished the challenge. Carrying a chess set everywhere he went, his devotion became all-consuming: “for 300-days I practice for six- to eight-hours a day and play tournaments for another sixty-days,” he once revealed. “The other five-days are for rest.”

Rubinstein’s talent was quickly noticed; in competition, notable scalps fell, among them Mikhail Chigorin (whose philosophy would be considered one of the founding bedrocks of the Soviet School of Chess) and the American Frank Marshall. 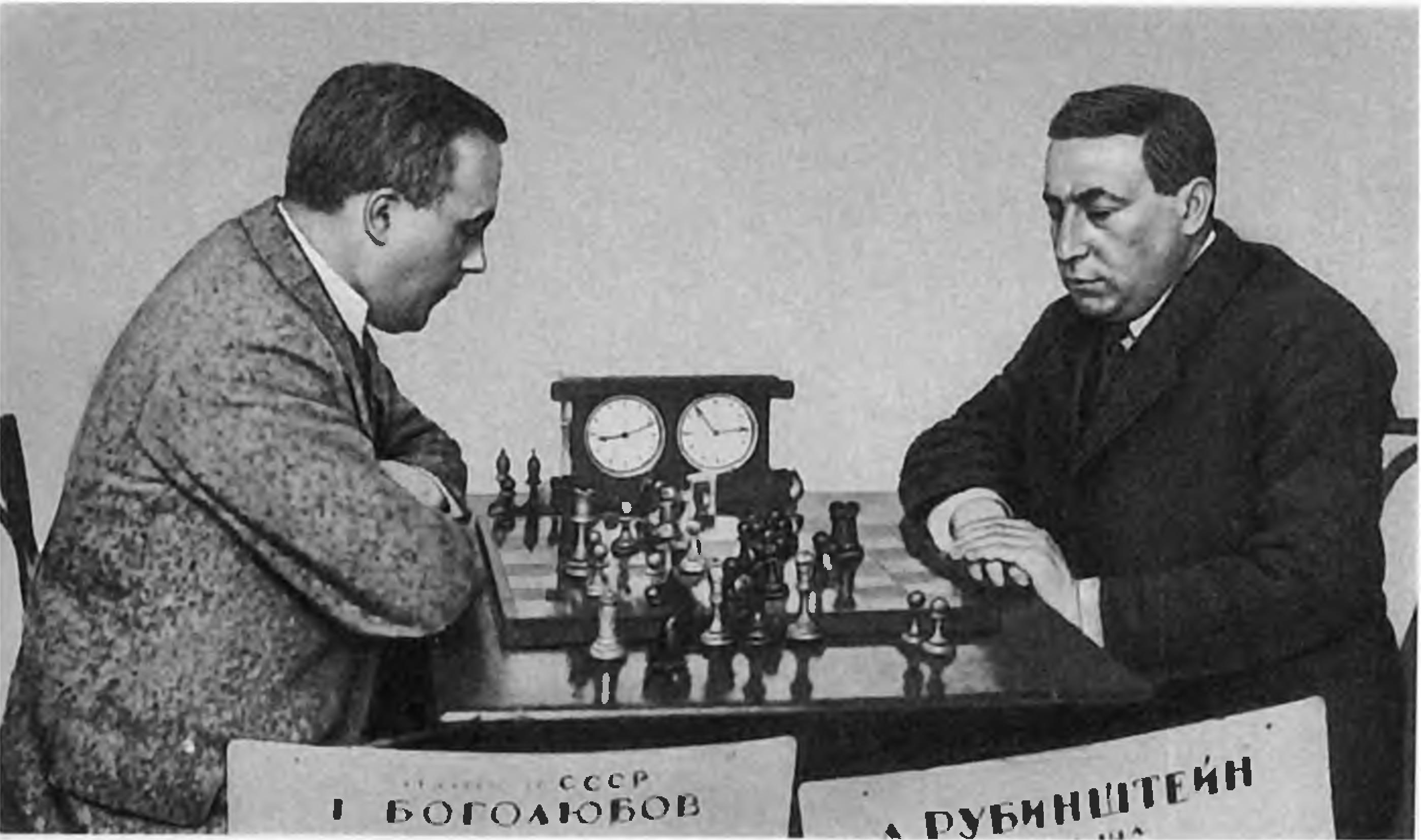 In a 1926 interview with an Austrian chess periodical, Rubenstein said: “I felt myself aesthetically connected to the game. It wasn’t only an art, but also about knowledge – victory is based on science.”Public domain

His star was in the ascent, and between 1907 and 1912 he never finished below third in any tournament he competed in. The greats fell like ninepins, among these the world No. 1 Emanuel Lasker. Facing each other in St. Petersburg in 1909, Rubinstein refused to be recognized as a representative of Russia and instead insisted on playing with a nameplate identifying himself as a citizen of Łódź.

“He belongs to a handful of great chosen masters,” noted Lasker. “It’s as if he’s clairvoyant in the game.” 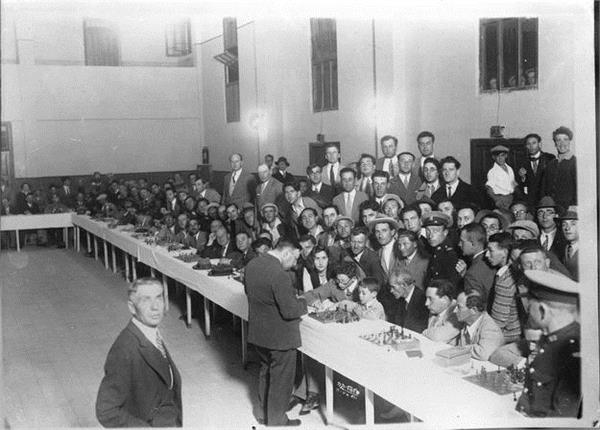 Seemingly, there was no end to the high times, and in 1912 he achieved a world first when he triumphed at five successive major international tournaments in the space of a year. Before his time, he would prepare for matches by keeping physically fit and mentally alert through swimming and gymnastics.

If there was a handicap, it was his almost terminal lack of funds. 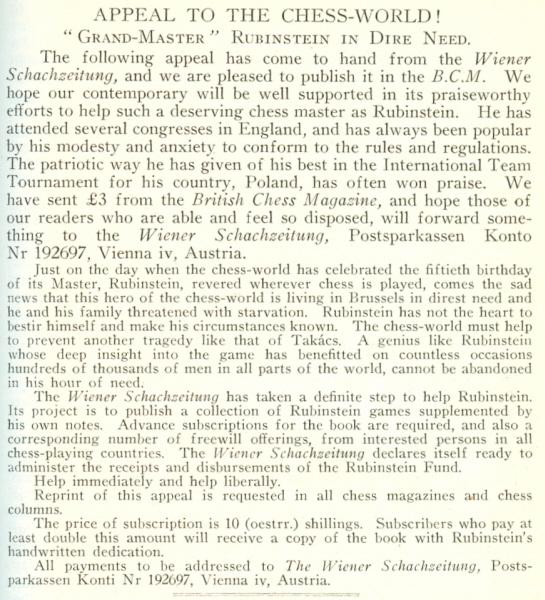 In 1933, British Chess Magazine rallied its readers to support Rubinstein after disclosing that the family was “in the direst need”.Public domain

With official world title holders only required to accept challenges from those who raised a fitting prize purse, Rubinstein was only able to engineer a shot at the world championship with Lasker in October 1914 after two years of protracted negotiations. Because of WWI, the match never went ahead and the Pole lost his life savings in the process. Decline set in, both mental and sporting.

Though he demonstrated strong glimpses of his pre-war form in the 1920s, he was unable to whip up the necessary funds to ever again issue a challenge for the world title, and as the years wore on his disillusionment became palpable – as did his erratic behaviour. Plagued with Social Anxiety Disorder, there were times when he would scurry to hide in the corner of a room whilst awaiting his turn. In 1932, he retired from competition. 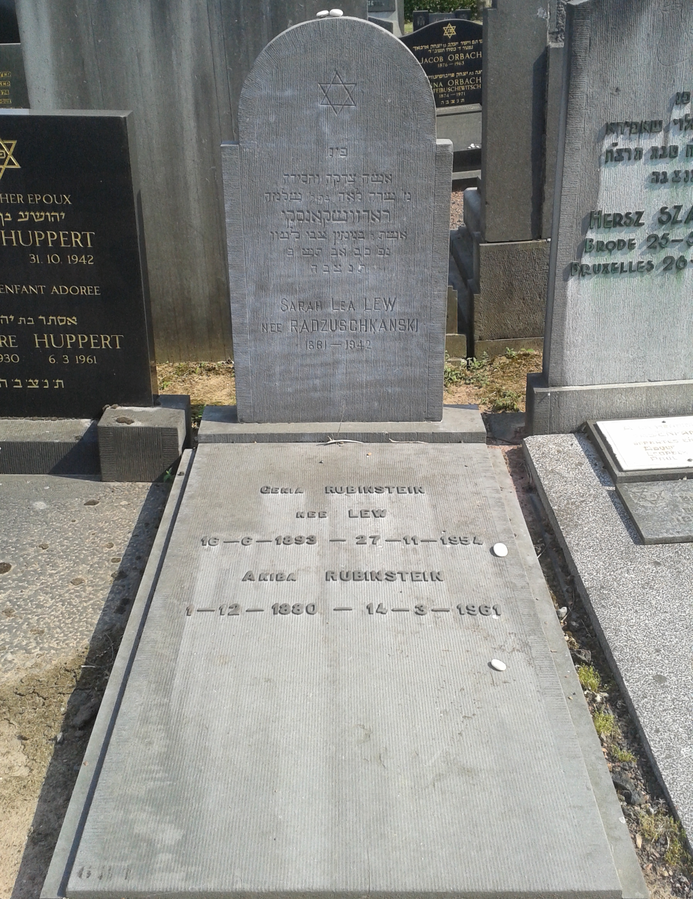 Rubenstein ended his days in an Antwerp nursing home where he died on March 14th, 1961.Grzmi

By this stage settled in Brussels where his wife ran a struggling kosher restaurant, their lives hit rock bottom. In 1933, British Chess Magazine rallied its readers to support Rubinstein after disclosing that the family was “in the direst need”.

How he survived the Holocaust is the subject of conjecture – some sources suggest that the Gestapo visited him and demanded to know if he would like to work in a German concentration camp. Wild-eyed and unwashed, the reclusive Rubinstein replied with enthusiasm, apparently bamboozling his smirking inquisitors to such a degree that they promptly left and never returned. Others claim that the Gestapo were bribed to leave him by an anonymous benefactor. Less outlandish, alternative versions have him hiding in a sanatorium for the war’s duration. 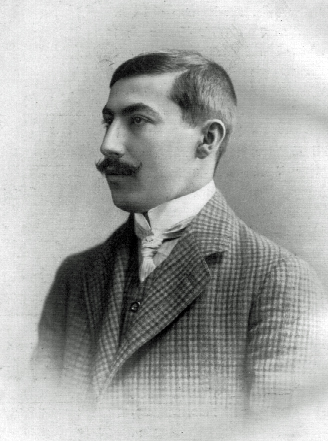 Chess champion Garry Kasparov described Rubenstein as “one of the fathers of modern chess.”Public domain

Whichever is true, this was not to be a story with a happy ending. When his wife died in 1954, Rubinstein retreated further into his shell, rarely communicating with anyone and often spending hours staring intensely at a chessboard before making the same move over and again. Described by this stage as “a living corpse”, he ended his days in an Antwerp nursing home where he died on March 14th, 1961.

It was an ignominious end to a player described by Garry Kasparov as, “one of the fathers of modern chess,” yet also perhaps fitting of a man haunted by crushing disappointment.