The Deputy Prime Minister, Culture Minister Piotr Glinski has outlined his vision of the post-pandemic world and its challenges, offering insight from Polish experience.

In a column in Wednesday’s issue of the Wall Street Journal, Glinski said that the pandemic would change the world we know forever in many ways, writing: “A global pandemic has torn the veil, behind which the horror of the world has appeared.”

He added that existential problems of life, death and security that people assumed have been solved forever have been laid bare in all their frailty. He went on to couch this in terms of a struggle for civilisation itself.

The culture minister compared the “quenching” of the economy to a war-like situation with severe disruption to the supply chain and other business connections that underpin the global economy and world order. Describing the economic situation as a “forced coma” he noted that nowhere in modern history is there a point of reference for the changes taking place, which affect every aspect of the global economy: “supply, demand, labor market, financial system, world trade, almost all sectors of the economy, whether  related to services or manufacturing are infected, paralysed or at least supressed.” 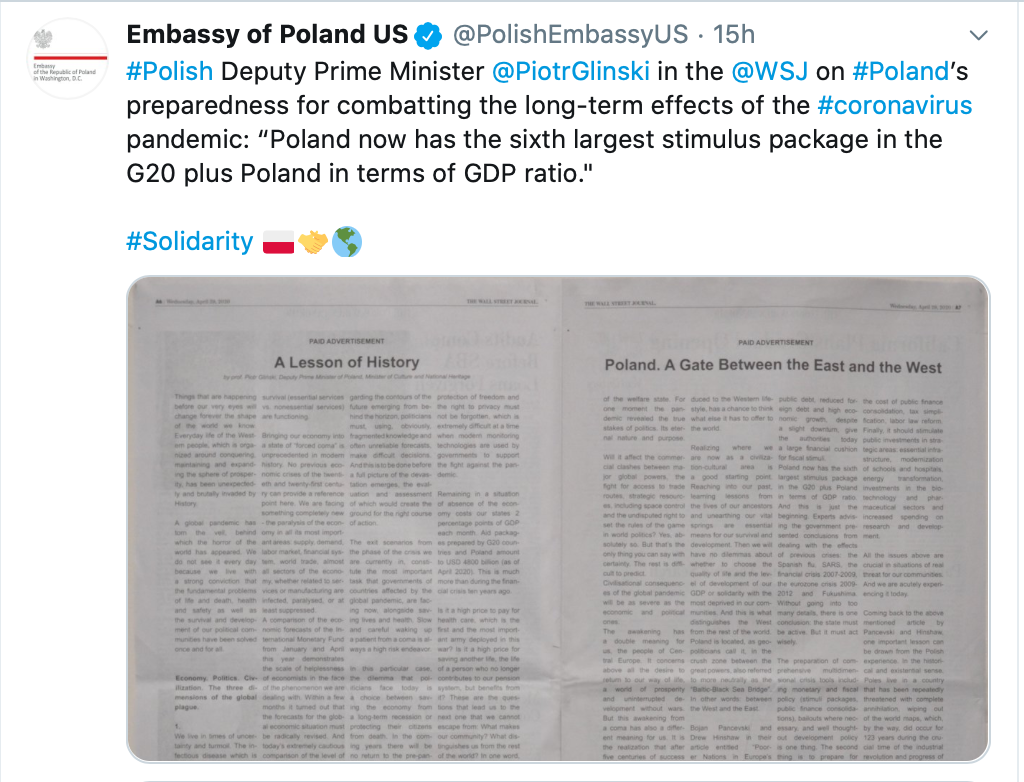 Glinski pointed out that as of April 2020, some USD 4,800 billion has been earmarked by G20 countries and Poland in aid packages to mitigate the pandemic’s fallout.Polish Embassy US/Twitter

This state of affairs, Glinski said, is beyond comparison with the 2007-2009 financial crisis or even the Great Depression of 1929-1933. We are in unchartered territory, but despite the uncertainty, hard choices have to be made even before a reliable assessment of the damage can be made; a dilemma for governments he describes as “between saving the economy from a long-term recession or their citizens from death.” There will be no return in the coming years to the pre-Covid-19 reality, he warned, but rather some form of unknown  “new normal.” This new normal will require a balancing act between protecting the most vulnerable and returning to economic growth, in which providing security for citizens is no longer an empty phrase but “a prerequisite for survival,” not only of individuals but of the community. He pointed out that the right to privacy is also threatened in a world of high-tech surveillance and the need to monitor societies more closely.

Highlighting that frozen economies cost countries 2 percentage points of GDP a month, Glinski pointed out that as of April 2020, some USD 4,800 billion has been earmarked by G20 countries and Poland in aid packages to mitigate the pandemic’s fallout – much more than during the last financial crisis.

In terms of the consequences of these renewed and fundamental political values, Glinski writes that it is absolutely certain that the new priorities will “affect the commercial clashes between major global powers, the fight for access to trade routes, strategic resources, including space control and the undisputed right to set the rule of the game in world politics.” Beyond this certainty, he maintains, everything else is hard to predict.

He likened the emergence from lockdown and economic freeze to the forced awakening of a patient from a coma, something he cautioned should be done with the utmost care. For the countries of Central and Eastern Europe (CEE), however, these civilizational questions have a “double meaning.” One the one hand, the countries of CEE wish above all to return to prosperity and growth without wars. At the same time, Glinski quoted Niall Ferguson that these countries are “one step from collapse.” He suggested that the last time civilisation collapsed, with the fall of the Roman Empire, it was not only due to a barbarian invasion but because the Roman Empire “lost self-confidence. Today we are facing the same threat.” 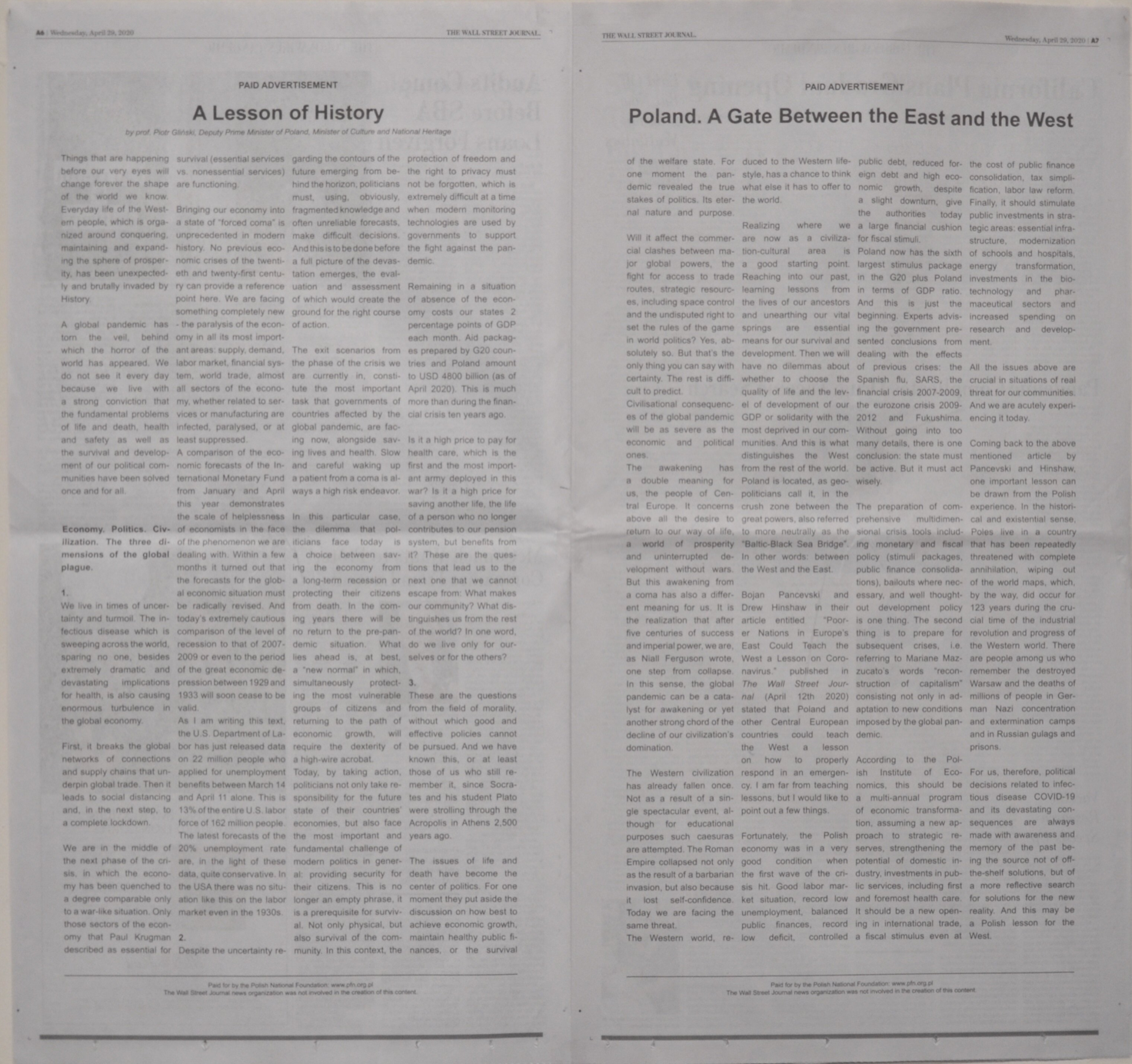 Gliński likened the emergence from lockdown and economic freeze to the forced awakening of a patient from a coma, something he cautioned should be done with the utmost care.Polish Embassy US/Twitter

Moving from the dilemmas facing the West to the reality facing Poland, Piotr Glinski said that it is situated in the “crush zone between great powers” or less dramatically in the “Baltic-Black Sea Bridge,” or between East and West. He references an article by Bojan Pancevski and Drew Hinshaw entitled “Poorer Nations in Europe’s East Could Teach the West a Lesson on Coronavirus” from the April 12 edition of the Wall Street Journal, in which the writers suggest Poland and other CEE countries have lessons to teach in their response to the pandemic. Though saying he does not wish to teach anyone, Glinski said that nonetheless he would like to “point out a few things.”

First on the deputy PM’s agenda is the fact that Poland entered the crisis in enviable economic shape. “A good labour market situation, record low unemployment, balanced public finances, record low deficit, controlled public debt, reduced foreign debt and high economic growth, despite a slight slowdown,” all contributed to giving Poland room for manoeuvre when it came to emergency provisions, mitigation packages and even bailouts. He pointed out that Poland has the sixth largest fiscal stimulus package of the G20 plus Poland countries in terms of GDP ratio and that the lessons learnt from other crises is that “the state must be active. But it must act wisely.”

Comprehensive recovery tools including fiscal stimuli and monetary policy are one thing, but subsequent crises also need to be prepared for, the Polish culture minister wrote. Referring to Mariane Mazzucato’s expression “reconstruction of capitalism,” he cited the Polish Institute of Economics as advocating that this include a “multi-annual program of economic transformation, assuming a new approach to strategic reserves, strengthening the potential of domestic industry, investments in public services, including first and foremost healthcare.”

He continued by saying that the approach should also be a new opening in international trade, a fiscal stimulus “even at the cost of public finance consolidation, tax simplification, labor law reform.” This, Glinski wrote, should be coupled with a stimulation of strategic public investment including: “essential infrastructure, the modernisation of schools and hospitals , energy transformation, investments in the bio-technology and pharmaceutical sectors and increased spending on research and development.” All of the above he described as crucial for the survival of our communities.

Referring back to the Pancevski-Hinshaw article, Glinski highlighted that Poland’s experience historically is one of being threatened with complete annihilation and indeed the country disappeared from the map for 123 years, pointing out that some Poles remember the cataclysmic onslaught of the German Third Reich as well as 50 years of communist rule with the existential threat they represented.  As a result, the search for politico-economic solutions to the post-COVID-19 reality are made with awareness and memory of the past: “And this may be a Polish lesson for the West,” he said.

Most Poles plan vacation at home