Just a few years ago, it was normal to see former camp prisoners visiting the Auschwitz Memorial Museum in groups or with their families. Now such visits are becoming a rarity and soon that dwindling group of survivors will finally pass into memory.

When the final witness eventually passes away only the objects at the camp will remain and they will have to speak on behalf of the victims.

Therefore, the preservation of the museum’s collections and the fabric of the camp itself is as important as ever so that the next generation can be educated about the horror that our species inflicted on itself at Auschwitz in 1940-45.

Added to this are 155 camp buildings, including living blocks, sanitation blocks and kitchens, the ruins of four gas chambers and crematoria, railroad tracks and over 13 kilometres of fencing including 3,600 fence posts. 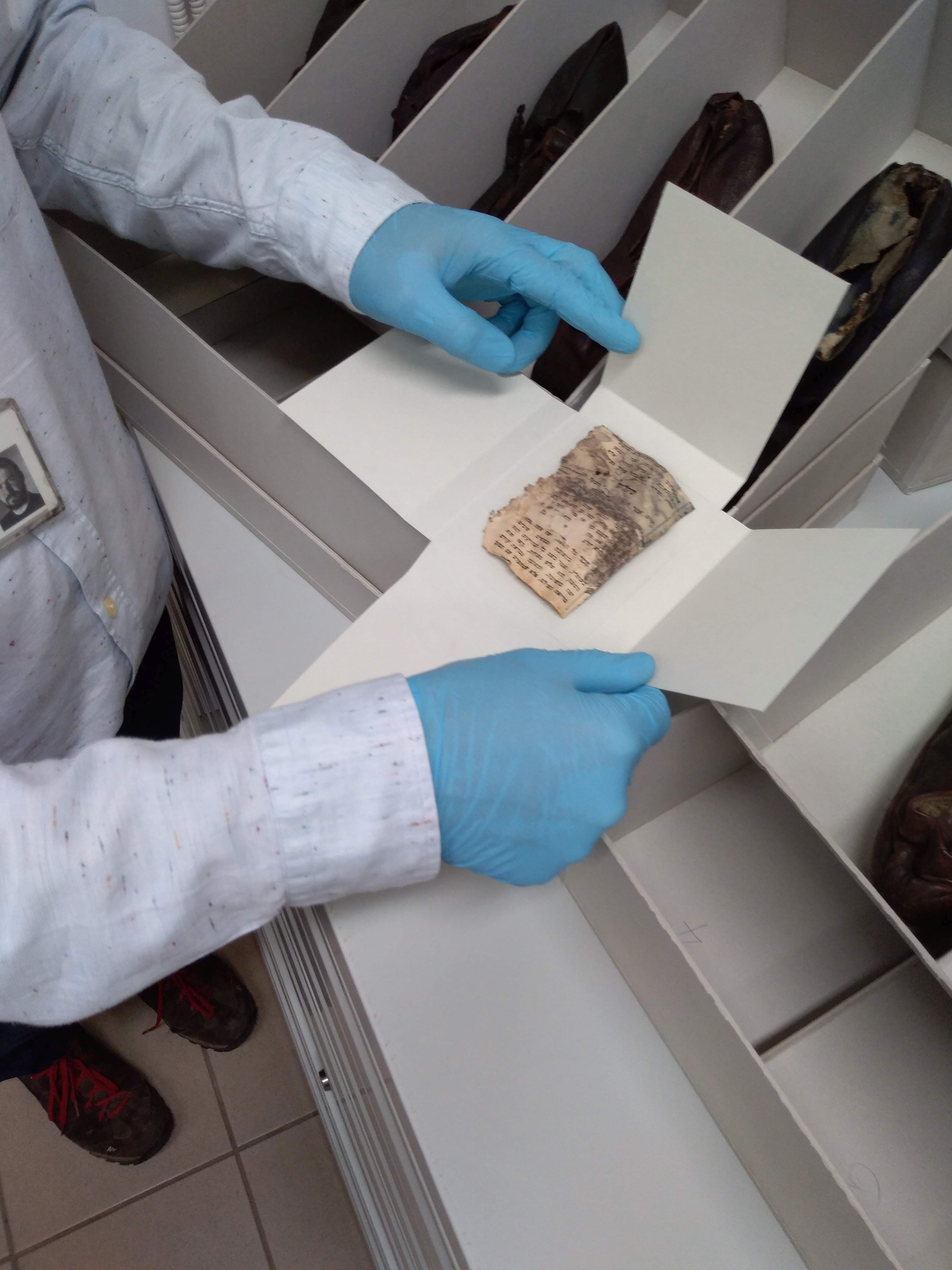 The past still being unearthed. A small piece of paper with a Hebrew text on it recently discovered tucked inside one of the shoes.Stuart Dowell/TFN

Early attempts at preservation were primitive by today’s standards and they often damaged individual objects.

A typical technique was to cover an object in a special kind of resin. All this now has been carefully removed. Another problem was that rust and dirt would be stripped back too far with iron brushes, taking away forever original elements of an item.

The task of undoing this harm and preserving the suitcases, clothes, shoes, glasses and other belongings of prisoners and gassing victims lies with the museum’s modern conservation laboratory, which opened in 2003 with funding from the Ronald S. Lauder Foundation.

Among the laboratory’s committed 20 staff is Andrzej Jastrzębiowski, a passionate conservator whose easy-going nature masks the seriousness of his work. 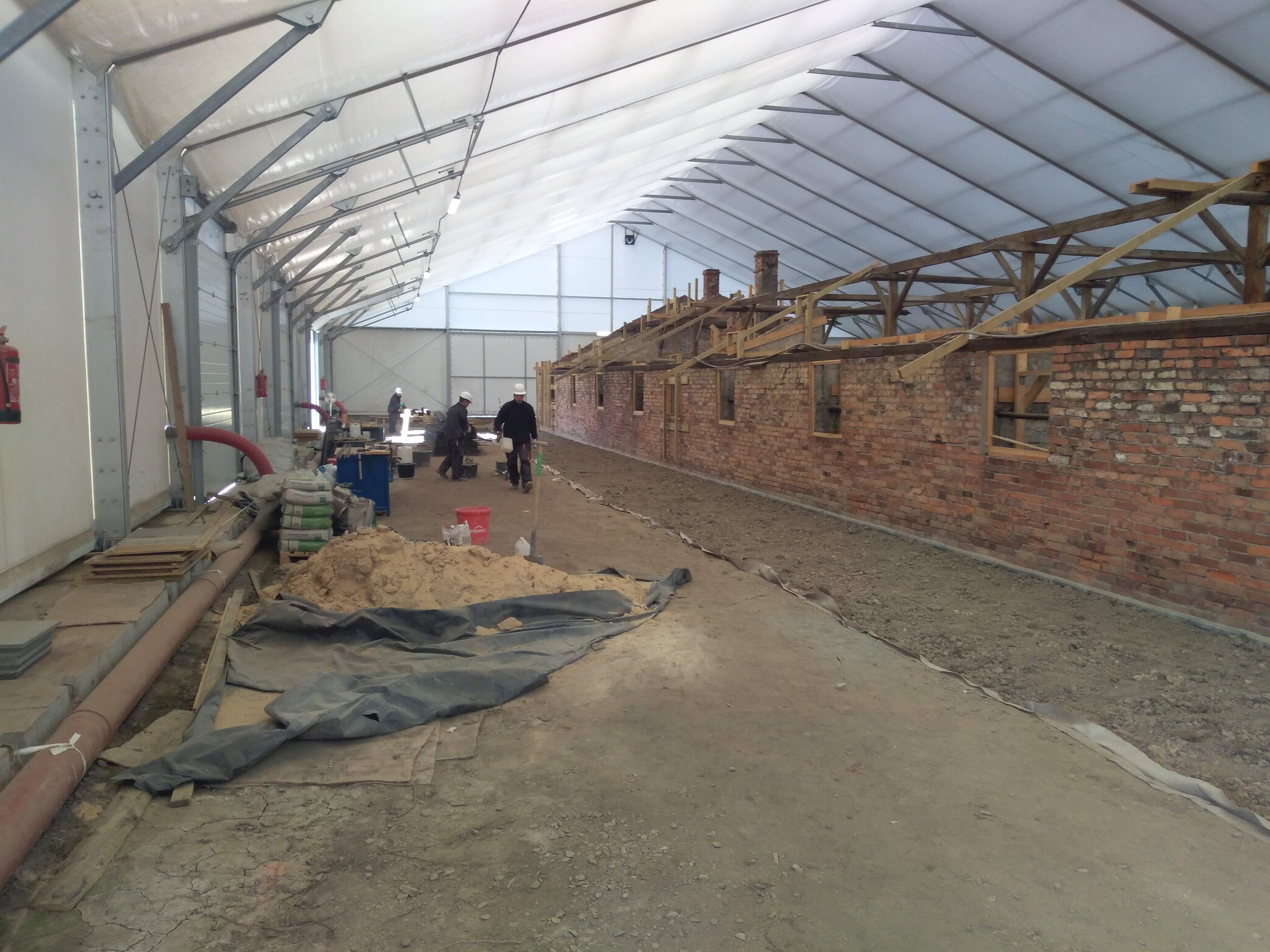 Many of the camp’s buildings were built quickly and poorly, and as a result are suffering from the effects of time.Stuart Dowell/TFN

“Our objective is to preserve the objects so that they survive, not to restore their original appearance as in the case of a work of art,” he says.

“When we work on an object, from a shoe up to a barrack building, our aim is to interfere as little as possible in order to preserve its authenticity. If we add anything, it must be visible that it is an addition and not an original element,” he explains.

“Also, any change that we make should be reversible, so if better technology comes along in the future, we can apply it to the original item,” he adds.

The number of items that are in need of preservation by Andrzej’s team can seem overwhelming, but they still remain of fraction of what remained on the 191-hectare site when it was liberated by the Red Army’s 322 and 100th Rifle Divisions in January 1945. 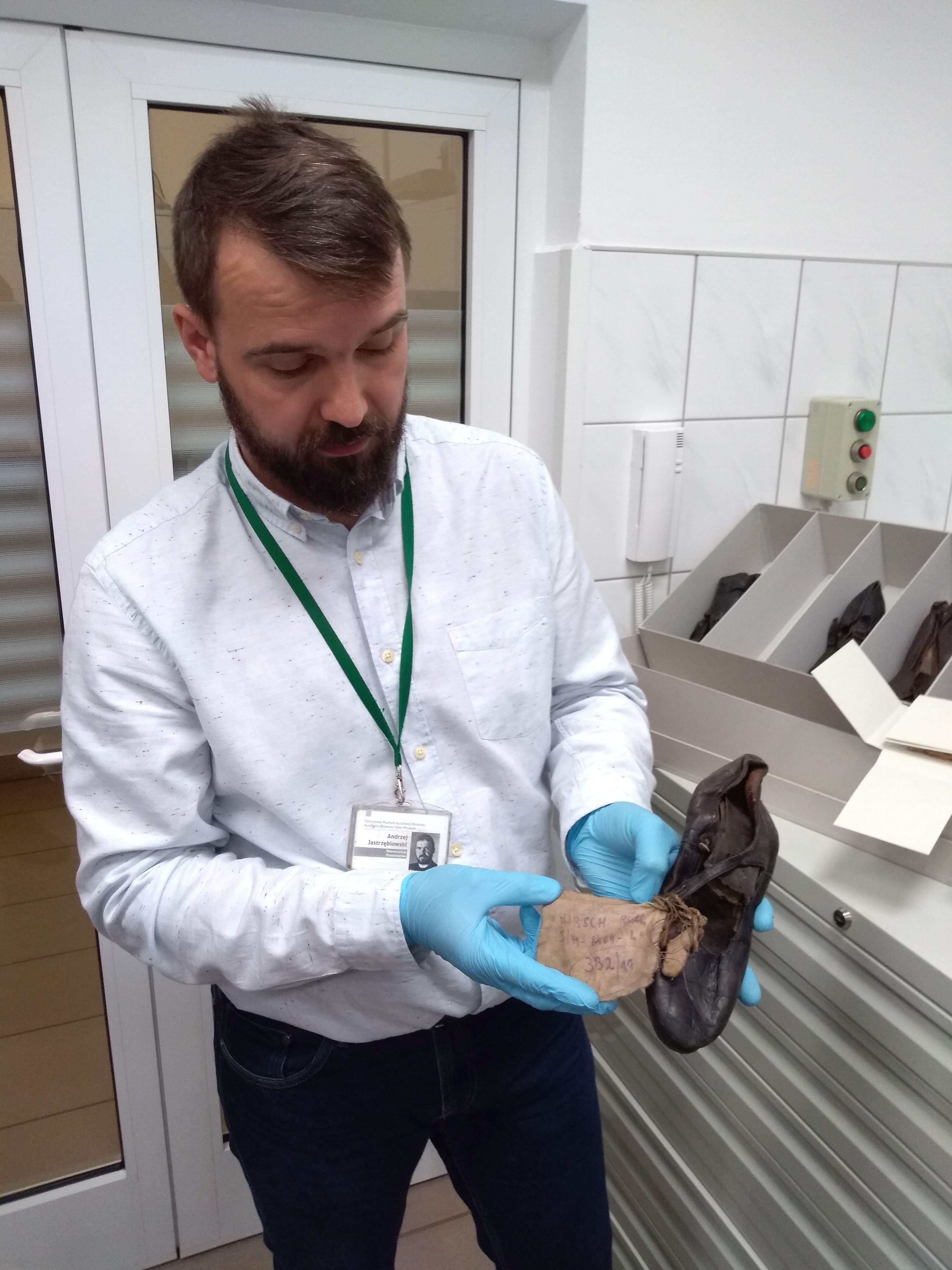 Conservator Andrzej Jastrzębiowski holds a victim’s shoe. “These are the details of a real person. It can be hard emotionally, but each of us deals with it in our own way,” he says.Stuart Dowell/TFN

Between 1945 and 1947 the site was a kind of no-man’s land where theft was common. Former prisoners who returned to Auschwitz to live and preserve the memory of their trauma tried to save what they could, often by hiding items. However, they couldn’t stop around 60 percent of what was at the site being taken by the Soviet authorities, who were particularly interested in archives and metal objects.

In the early 1990s, a window of opportunity opened for the museum to regain documents, but this period of openness under Yeltsin soon closed and negotiations with the Russians have since stalled.

Back at the conservation lab, each type of item has its own challenges. After the war, barrack windows were painted every ten years, leaving the original paintwork buried under many layers. Therefore, the laboratory had to analyse samples to determine how many layers of paint there are and the compounds in the paint of each layer.

“If we know what materials were used, we know what solvents we can apply to strip the post-war layers away,” Andrzej explains.

Shoes also need a special process. The dried-out leather needs to be moistened, after which it can be cleaned. Oil is then added to preserve the leather. 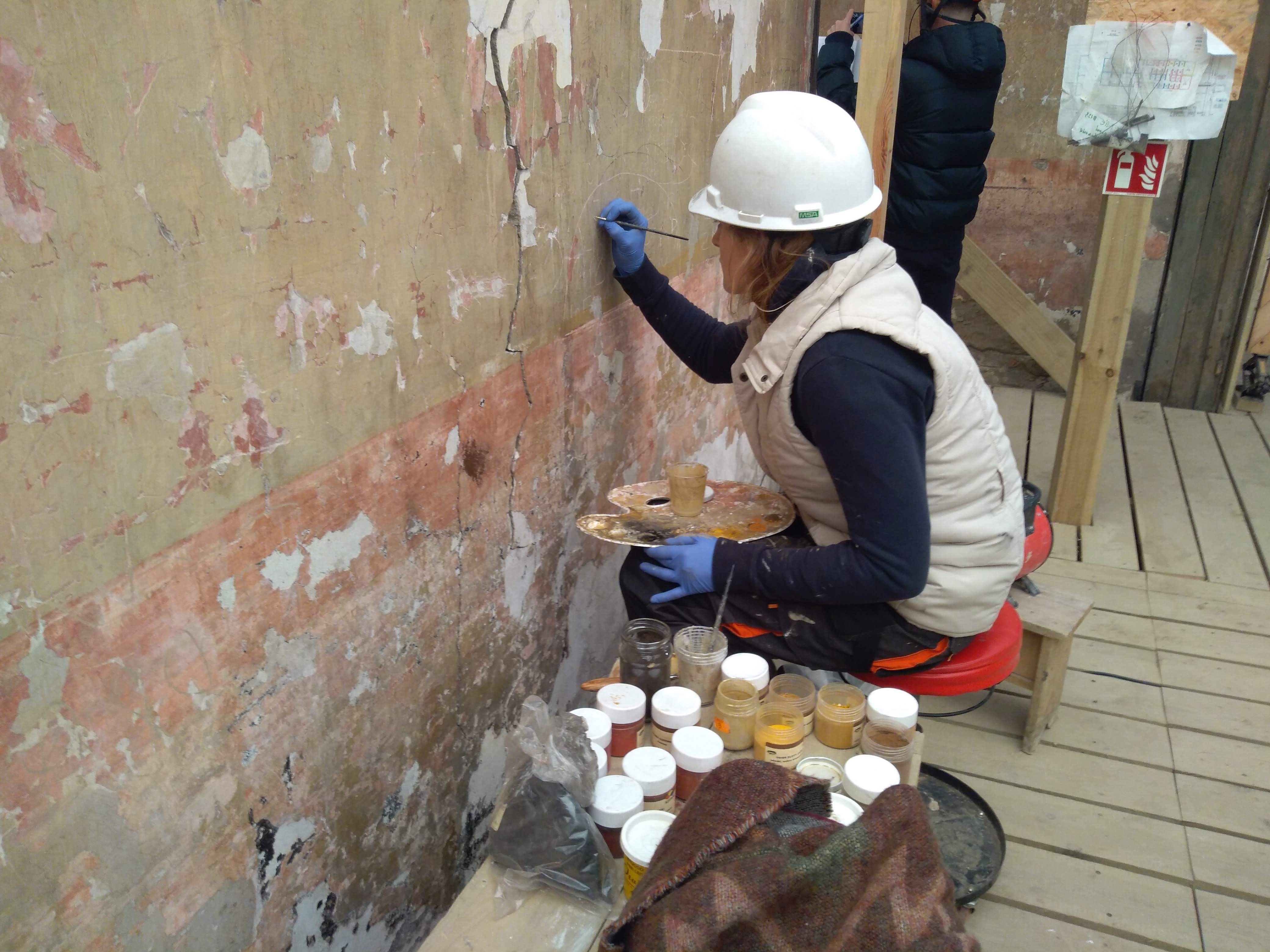 Walls have been defaced by graffiti and people scratching messages into them.Stuart Dowell/TFN

It is often when the staff are working on shoes that they make discoveries that are a reminder that each item belonged to a real person.

From one shoe, Andrzej revels a piece of folded paper on which a prayer was written in ink in tiny Hebrew script. From another shoe, he reveals a cut out section of a cigarette carton with the tax band still visible. He can offer no explanation why the owner placed it in their shoe.

“When we find these things, it makes the objects less anonymous. These are the details of a real person. It can be hard emotionally, but each of us deals with it in our own way,” says Andrzej.

Many items, such as suitcases and textiles, are now stored in specially designed, temperature-controlled storage facilities. Andrzej says that textiles and clothing are generally quite stable, but the way they are displayed can cause damage to the objects. The Jewish prayer shawls that can be seen in the main exhibition used to hang, but now are spread over a display table at an angle that has been specially measured to reduce pressure.

As a conservator, Andrzej is keenly aware that the way objects are displayed can have an impact on their preservation. 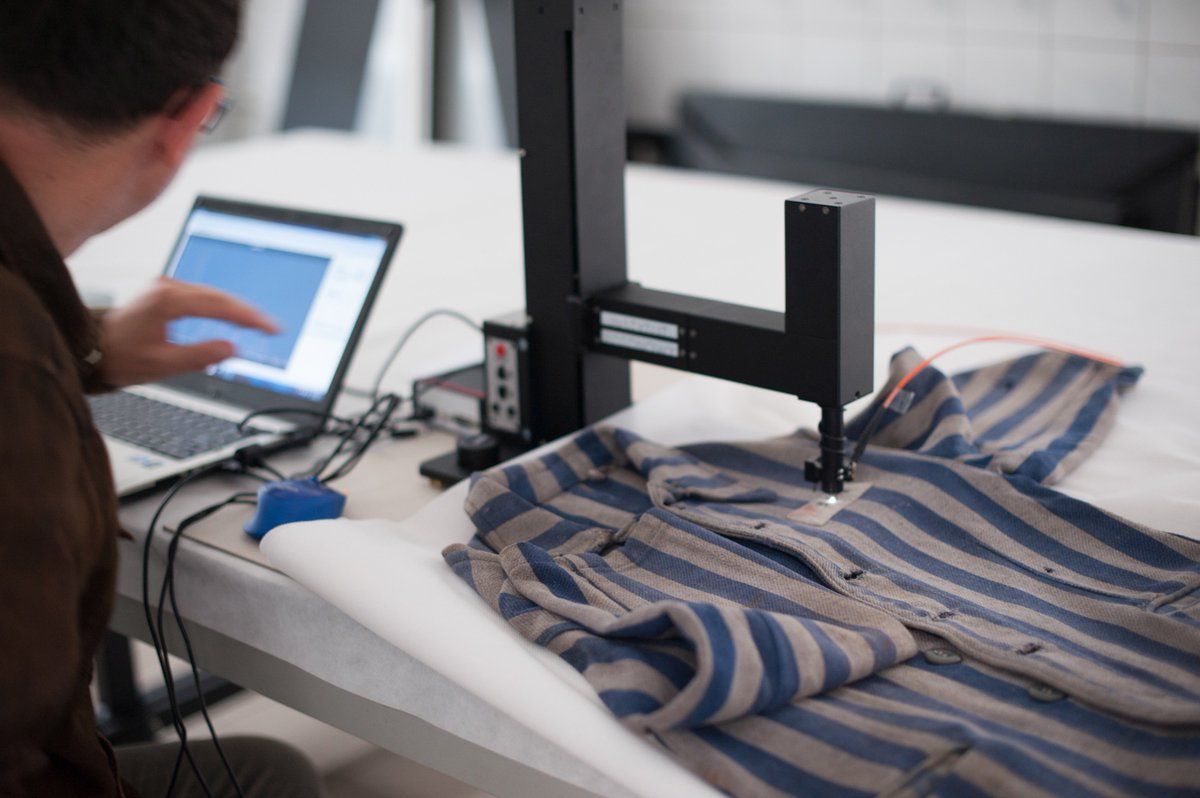 “Our aim is to interfere as little as possible in order to preserve its authenticity,” says Jastrzębiowski.The Auschwitz Memorial Museum

“I hate to see suitcases and shoes piled on top of each other. So, we are moving away from showing huge piles of items. In future we are planning to show for example just ten pairs of shoes,” he says.

Two kilometres away at the vast Auschwitz-Birkenau extermination site the largest preservation project in the history of the museum to preserve two brick barracks is in its final stages.

The museum’s philosophy to leave everything as unchanged as possibly has been put into practice in the two barracks that are currently protected from the elements by two huge 12-metre high white tents.

Site manager Ewa Cyrulik says “the goal is to leave everything unchanged. When someone comes to see the progress and they say they can’t see anything different, it is the biggest compliment for us”.

The barracks were built hastily at the turn of 1941 and 1942 to house Soviet prisoners of war and the poor quality of the construction as well as the fact that they have never been preserved before means that the work of the conservators is painstaking. 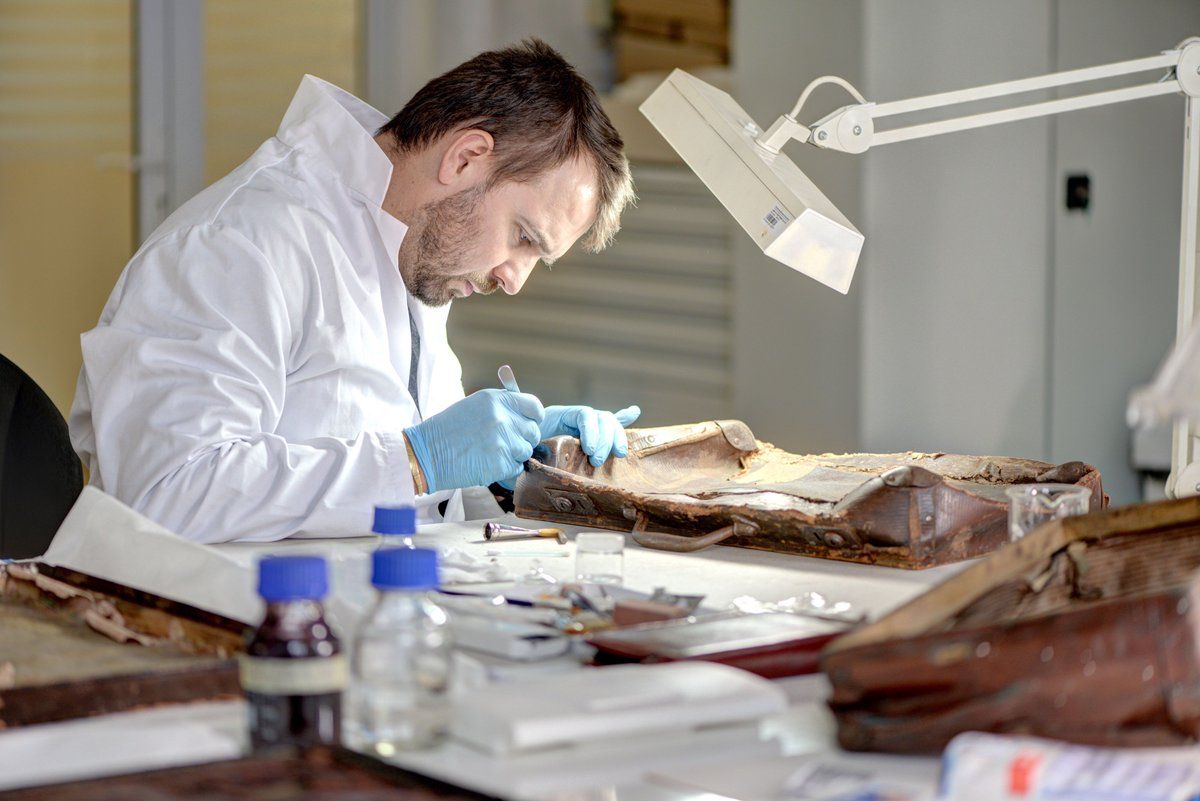 A conservator works on one of the museum’s 3,800 suitcases.The Auschwitz Memorial Museum

The thin walls made of a single thickness of poor quality brick are buckling in places and the foundations have been eroded by groundwater.

Added to the difficulty is the need to remove large amounts of graffiti and other scratchings left by generations of visitors.

The work on these barracks has been funded by the Auschwitz Birkenau Foundation, an endowment that so far reached EUR 112 million of its EUR 120 million target. Large donations have been made from Germany, Poland and the United States and the fund will generate money each year to pay the museum’s preservation activities.

This money is sorely needed as work on these two barracks alone will have taken more than four years when work is completed in March next year costing several million euros. After that, the museum’s long-term masterplan for the site’s preservation envisages working on over 40 other sleeping barracks, latrines and other camp buildings.

One group of items that the museum has decided not to preserve is the mass of human hair that fills a whole display cabinet in a room with specially tinted windows where visitors are asked not to take photographs.

The hair is slowly losing its colour and after a decision made on ethical grounds it will eventually turn to dust untouched in the same display cabinet.