Conference pays tribute to the man behind UN’s genocide laws

The term “genocide” is known worldwide, but relatively few people know that it was coined by Rafał Lemkin, a lawyer of Polish-Jewish origin.

A conference at Warsaw University this week, entitled “Witness to the Age of Genocide. Rafał Lemkin and the Convention of 1948”, reflects on his work and its continued relevance.

Made up of Greek “genus” (race or people) and Latin “cide” (killing), the United Nations defines genocide as “acts committed with intent to destroy, in whole or in part, a national, ethnic, racial or religious group”.

In addition to the Holocaust, the term has been applied to mass killings including the Armenian genocide that began in 1915, the Holodomor man-made famine in Soviet Ukraine in 1932-1933 and, more recently, the Rwandan genocide of 1994.

Lemkin was born in 1900 near the town of Wołkowysk (now in Belarus), which was in the Russian Empire at the time. After studying at Jan Kazimierz University in Lwów (now Lviv, Ukraine), he worked as a public prosecutor in Warsaw during the 1930s. 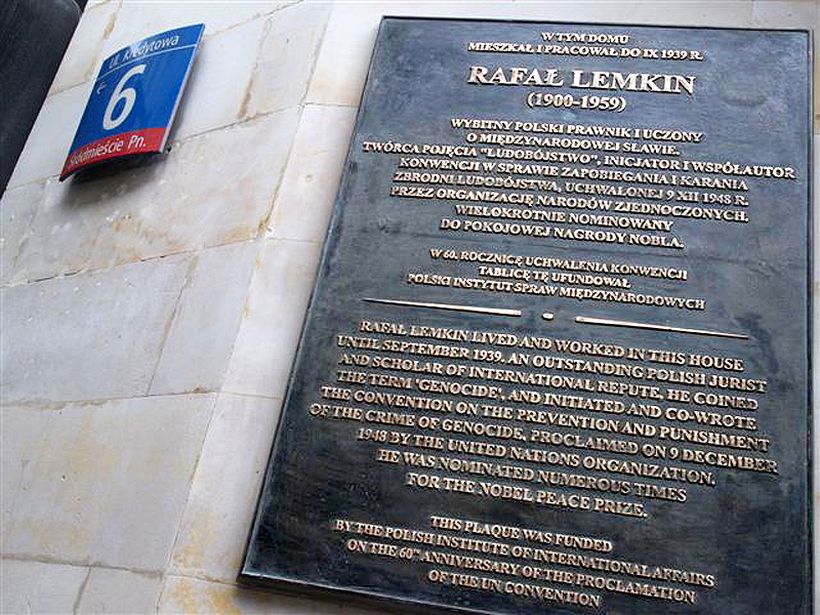 A plaque dedicated to Lemkin was unveiled in 2008 on the building at 6 Kredytowa Street in Warsaw, where he lived and worked until September 1939.Public domain

After the outbreak of World War II, Lemkin managed to emigrate to the United States in 1941, but lost 49 of his relatives in the Holocaust.

His ideas acquired a new significance after 1945, when he helped the Americans prepare the Nuremberg trials against the Nazis. On 9 December 1948, the United Nations General Assembly adopted the Convention on the Prevention and Punishment of the Crime of Genocide initiated by Lemkin, which defines genocide in legal terms.

Lemkin spent the rest of his life in the United States, lecturing on law. He died in 1959 in New York.

A plaque dedicated to Lemkin was unveiled in 2008 on the building at 6 Kredytowa Street in Warsaw, where he lived and worked until September 1939.

The conference in Warsaw, marking the 80th anniversary of the UN’s Genocide Convention, covers Lemkin’s work, influence and legacy.

A biographical panel will consider Lemkin’s intellectual formation, from his earlier years to his legal studies. Other panels will consider genocide from both a global and a Polish perspective, with two on genocide on occupied Polish territory during World War II.

On a more reflective note, panellists will discuss how people should be taught about genocide in secondary school and beyond.

The conference, which runs from 3 to 5 December, is organised by the Pilecki Institute in partnership with Warsaw University’s Faculty of Political Science and International Studies.

The Institute’s mission is to preserve the memory of the historical experiences of Polish citizens in the 20th century by collecting documents and supporting research.

Zelensky thanks Duda for support at UN forum

Russia should be brought before justice, Polish minister says at UN