‘Carfully’ done: From pope mobile to a four-wheeled remnant of Hitler’s 6th Army, the Otrębusy Car Museum has it all

There are bigger car museums in the world. There are ones with shinier collections, and ones with higher profiles. But do any compete with the Museum of Motoring & Technology in terms of oddities and charm? That much is doubtful.

Set in Otrębusy, a village on the western fringes of Warsaw, the scenery on route from the capital passes in a blur of flat, featureless fields and roadside stops selling tires and tiles and industrial bits of hardware. Billboards advertising pallets and building materials dominate the landscape, and as one town gives way to the next, the feeling is of journeying into nowhere. 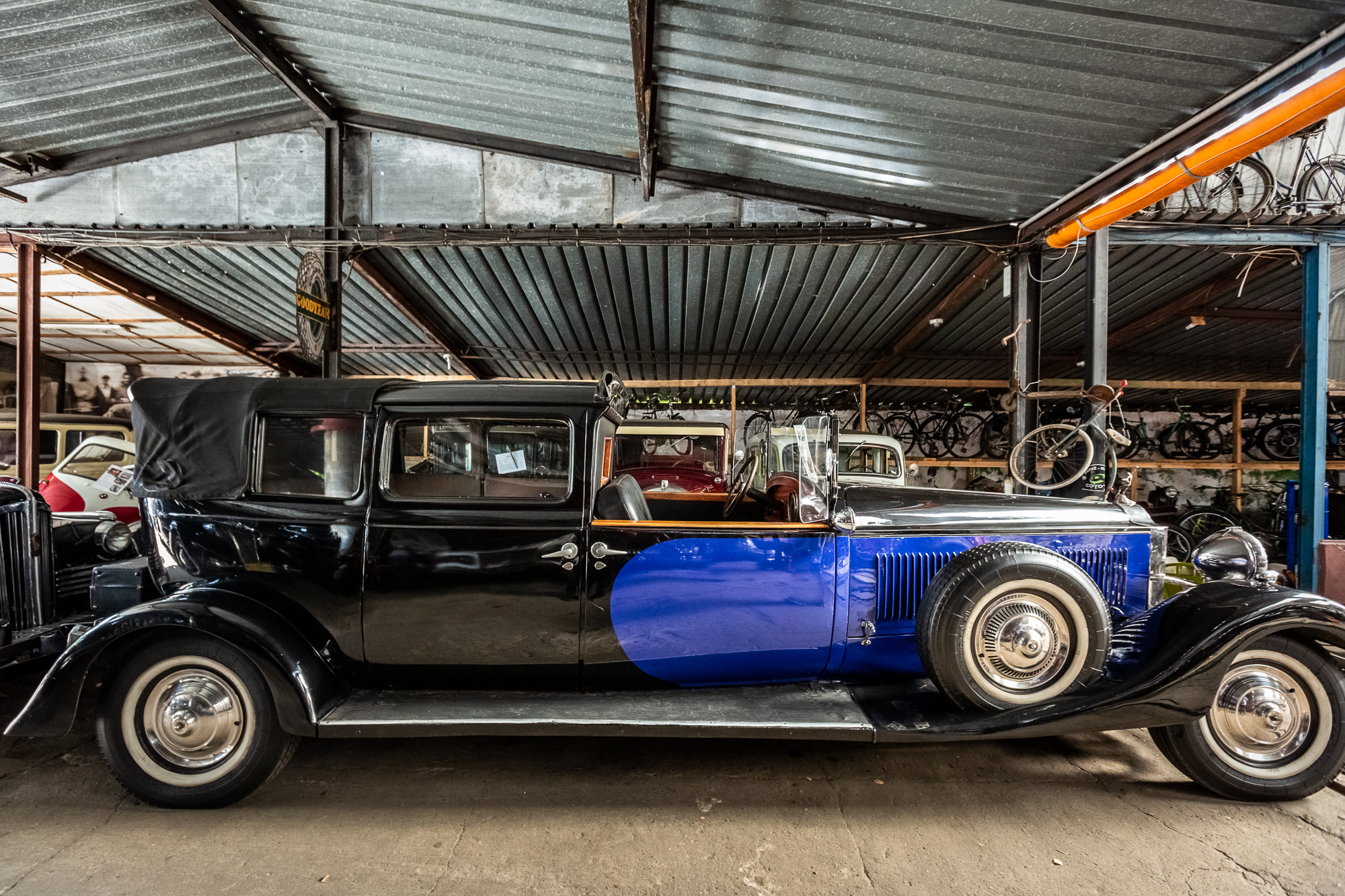 Some of the cars are grand and resplendent…Kalbar/TFN

At Otrębusy, however, attention is caught by the lumbering shape of a London double decker. Behind it, the fuselage of a plane and an assortment of vehicles that have long been rooted to the gravel. A scrapyard, possibly?

Nothing of the sort. The first indicator of that, perhaps, is the presence of a Popemobile. Not the Popemobile – the Communist authorities, we are told, had the original scrapped as they didn’t want it becoming a point of pilgrimage – but an identical replica made for a CBS miniseries titled Pope John Paul II. That’s right, John Voight once stood atop it. 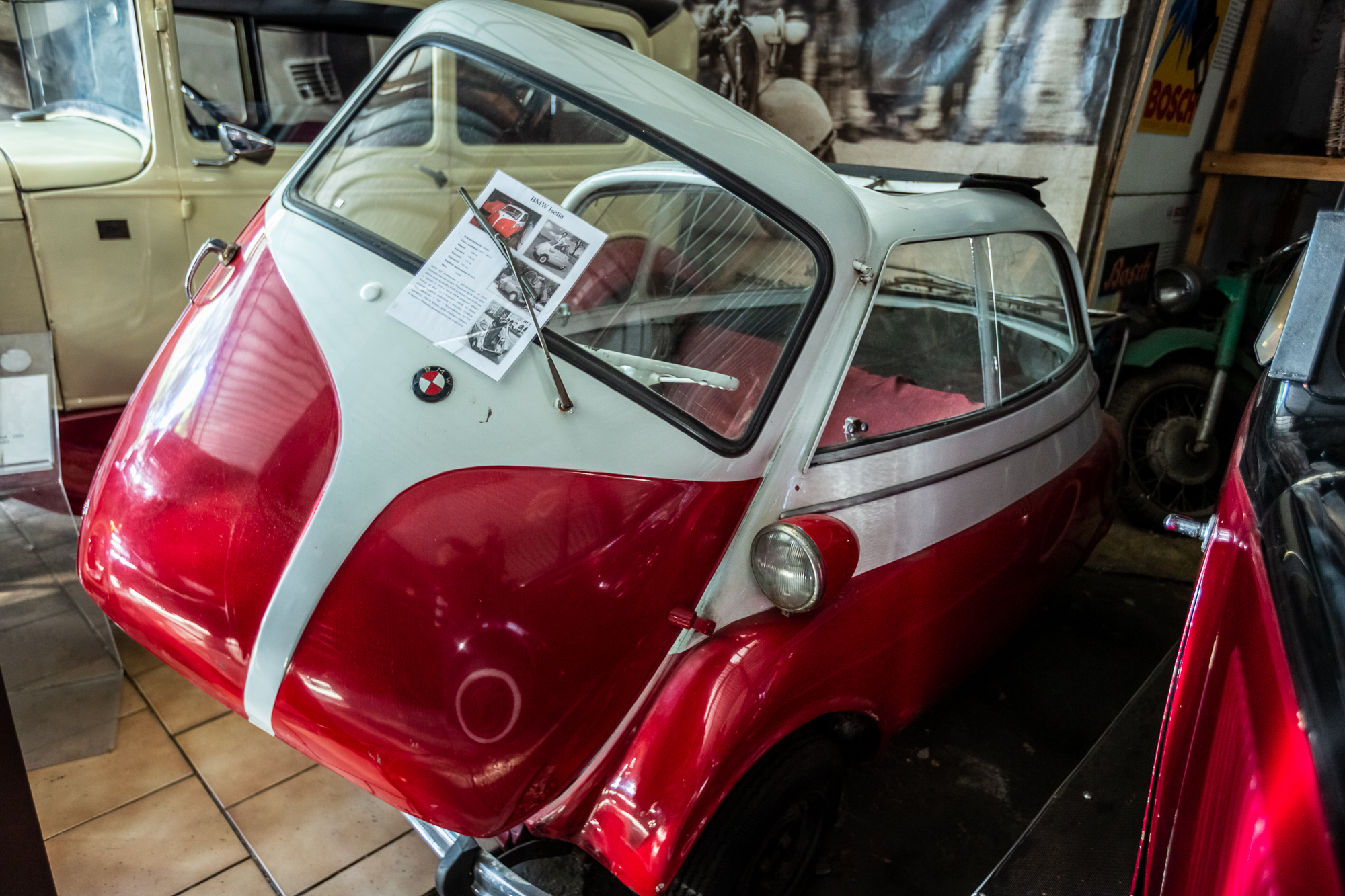 While others are more humble in their standing.Kalbar/TFN

Speaking to us is Patryk Mikuciuk of the museum, a rugged, charismatic figure and a high-profile media personality known for his work on the long-running Automaniak television show. Around us, a remarkable collection of cars amassed by his parents over the preceding decades.

“My parents were professional people with a love for cars and they started collecting them around 1970,” explains Patryk. “Back in those days, the normal public were only allowed one car, and you’d have patrols visiting homes making sure that they didn’t have any old automobiles ‘littering’ their property.” 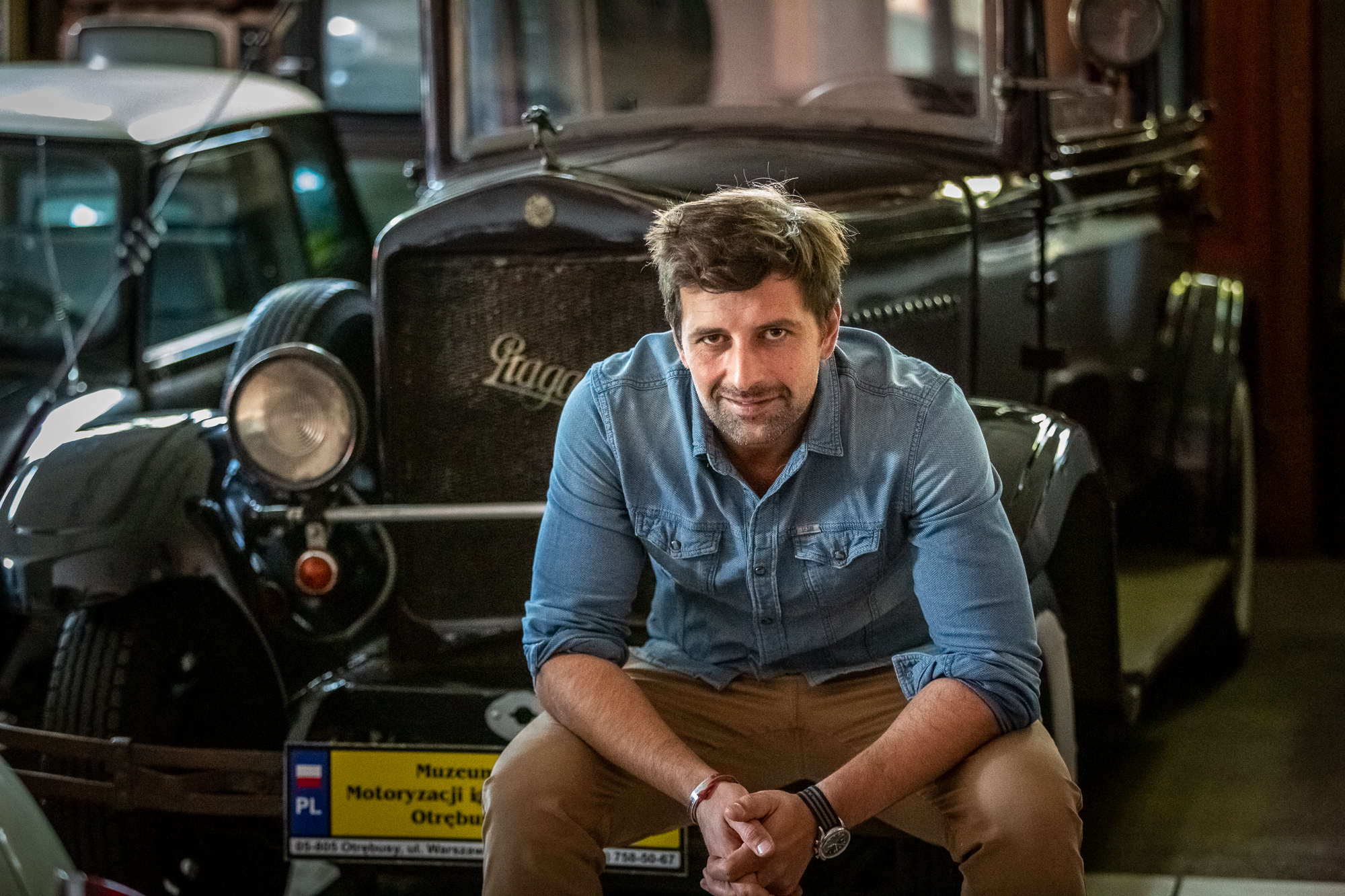 Patryk Mikuciuk, the museum’s owner, started with cars collected by his parents.Kalbar/TFN

Fines for breaking such rules were commonplace, but scrapping the cars required equipment and time that most simply did not have. Seen as a burden, many Poles didn’t need much encouragement to get rid of the vintage vehicles that they had in their possession. Fortunately, Patryk’s parents were on hand to snap them up and safeguard their future.

Doing so was no easy feat and demanded a degree of cunning to outsmart the authorities. The cars they stockpiled were hidden, some with friends and others in fields and other such places. Only when Communism collapsed were they finally able to group them together and openly reveal the fruits of their endeavour. 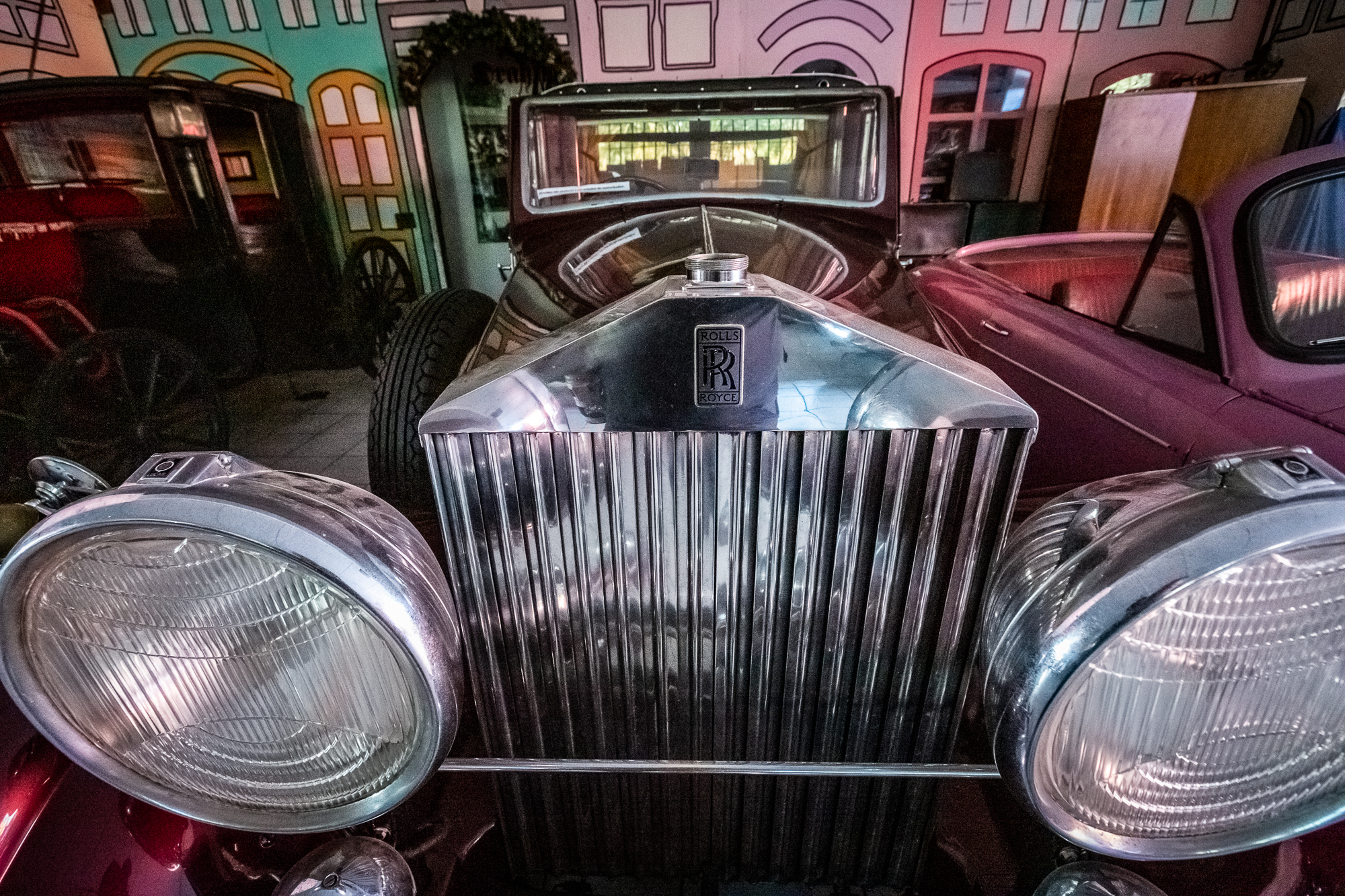 The museum is home to couple of Rolls Royces.Kalbar/TFN

Given the obstacles created by the outgoing political system, there is something richly ironic that many of the star exhibits are directly associated with the Communist top brass.

Ushering us inside a huge, shadowy garage that serves as the home of the museum, Patryk is quick to point out some of jewels in the crown. A ZIS 110 Cabriolet, delivered to Poland on the orders of Stalin, was to play a role in the opening ceremony of the Palace of Culture. Kept by the Poles following Uncle Joe’s death, it was later used to ferry such dignitaries such as Yuri Gagarin and Charles de Gaulle.

“There’s no accurate figures to refer to,” says Patryk, “but it’s commonly recognized that there were only seven to fifteen of these ever produced.” 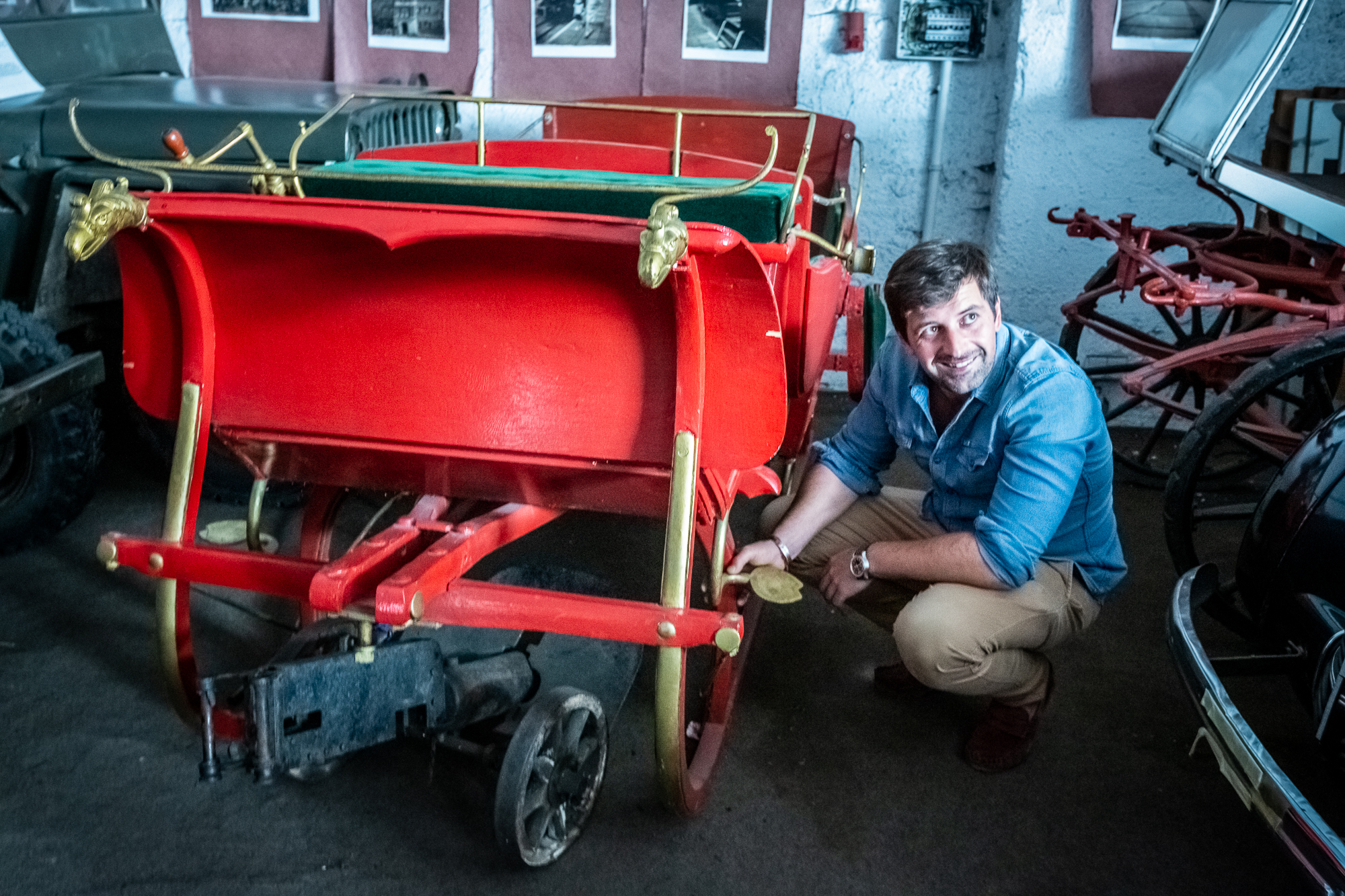 Each car has been lavished with approximately 3,000 to 5,000 working hours to restore it back to health.Kalbar/TFN

“The strange thing is,” he continues, “after serving its role for the government, its second owner was a Polish farmer that bought it to drive his mother-in-law to church. But she refused to travel in such an ostentatious vehicle, so instead the farmer used it to transport apples and the like!”

This, by no means, is the only such tale to arouse further interest.

There is General Jaruzelski’s Peugeot 604 – once crashed by the Polish leader as he sped to Zakopane – and a beast of a Cadillac Fleetwood that was intended to spirit First Secretary Edward Gierek to safety in the event of a war. 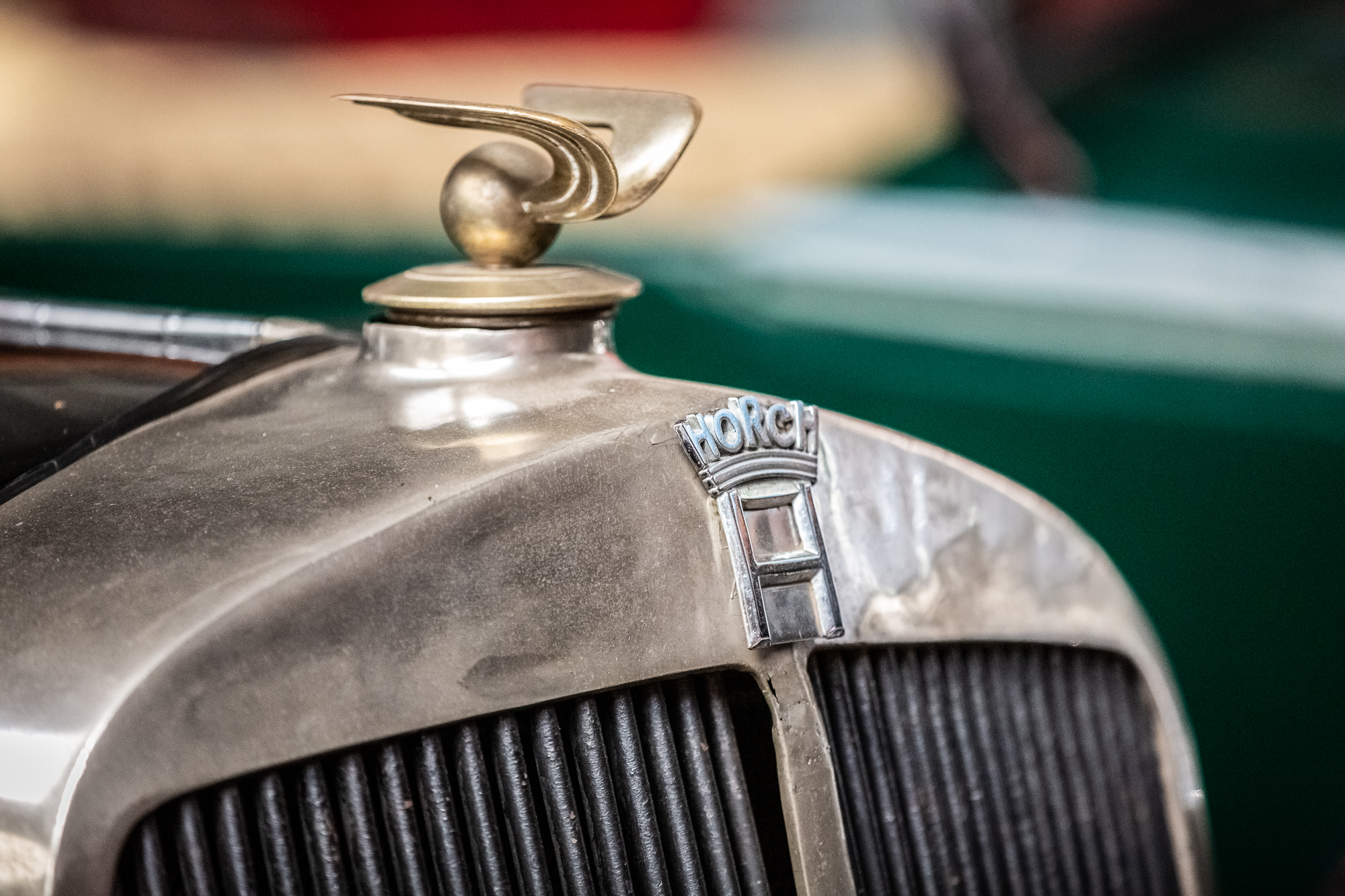 The German Horch is a survivor of the Battle of Stalingrad.Kalbar/TFN

“It’s allegedly identical to the models used by American presidents during that period, right down to its Kevlar armour,” says Patryk. “Its existence was top secret, and it had American plates, an American flag, and even an American uniform for its chauffeur – the thinking behind it, was that no-one would dare stop an American car racing towards the border.”

And still, the stories keep racking up. A Lancia Thema, purchased for over twenty-five million before the re-evaluation of the złoty is, speculates Patryk, likely to be the only one in the world with a million kilometres on the clock.

“Of those,” he adds, “the first 50,000 kilometres were covered with Lech Wałęsa travelling in the back, while its last 900 saw Lech Kaczyński as the primary passenger!” 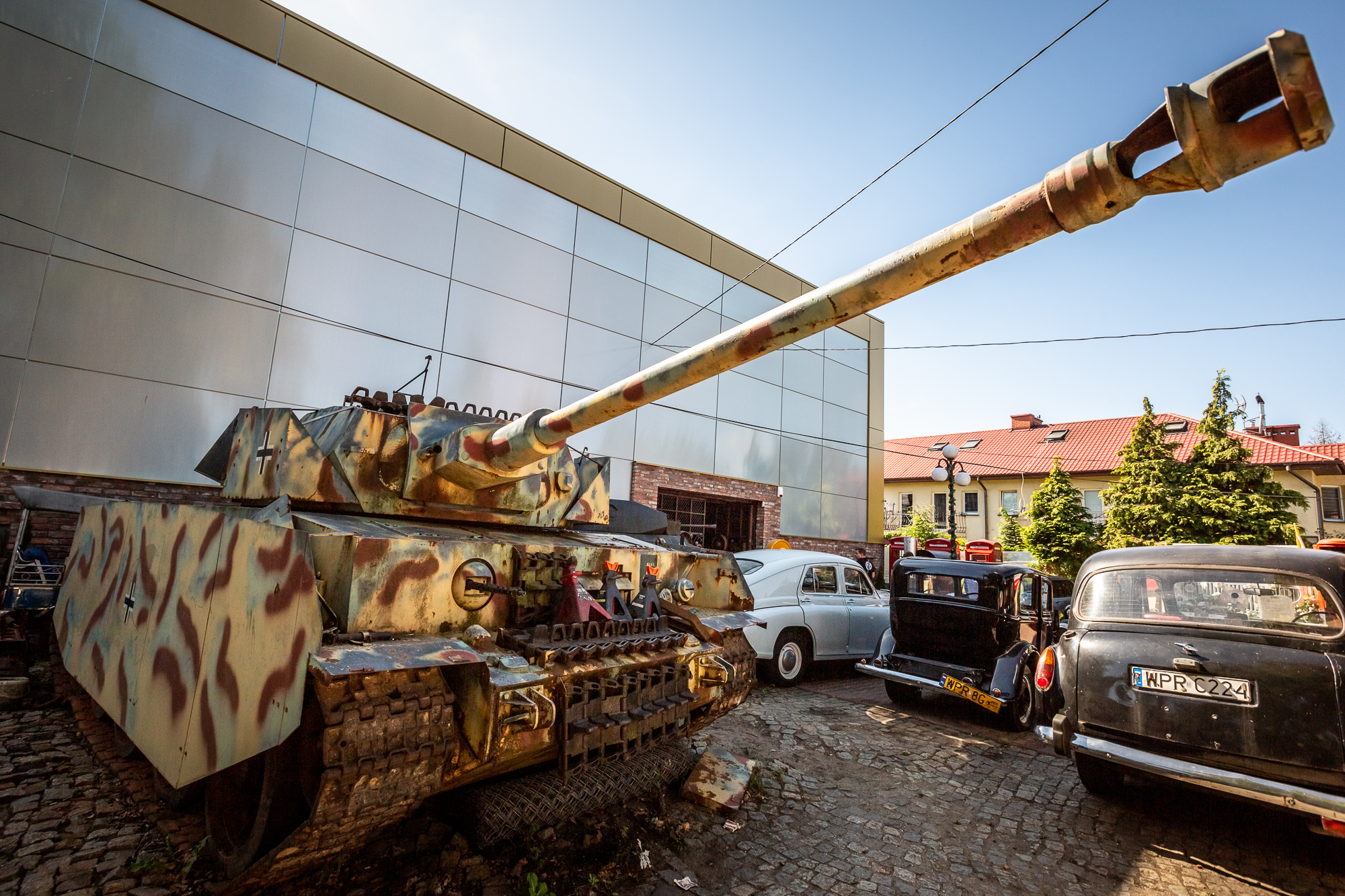 A massive German tank is also another remnant of the Second World War.Kalbar/TFN

Lech Wałęsa’s presence is not limited to this Lancia alone. There is, also, a three-and-a-half ton armoured Volvo 760 GLF, complete with six-centimetre bulletproof windows, used by him in the 90s, and later utilized by the police to drive Masa, a legendary mafia figure that ratted out his gangland cohorts at the start of the millennium.

“The problem with armoured cars,” says Patryk, “is that they need their windows changed every two years or so or else they crack in the sun.”

This, you get the idea, is the least of his problems. An extraordinary project of passion, each car has been lavished with approximately 3,000 to 5,000 working hours to restore it back to health. “Most of our cars arrive here in a horrible condition,” admits Patryk, “but I’d guess that around 95 percent of them are now in full-working order.” 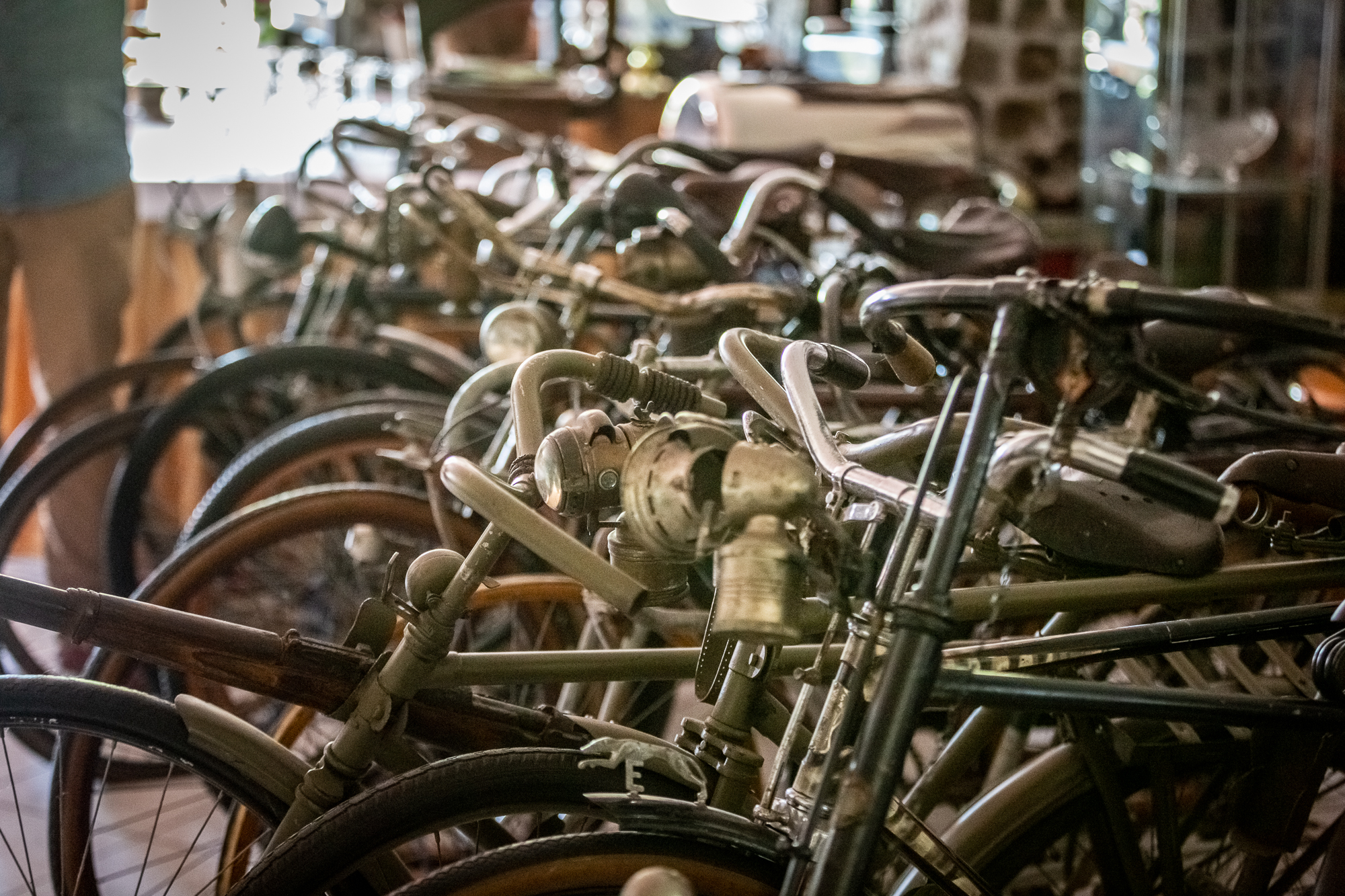 Along with cars come bikes and many odds and ends.Kalbar/TFN

“Take this German Horch as an example,” says Patryk. “We know this was a model only used by high-ranking Wehrmacht personnel, and we know that this particular car was recovered from Stalingrad. The thing is, when we started working on it, we realized its original colour was white – that wasn’t common at all, so our theory is it could possibly have belonged to Field Marshal Von Paulus.”

Anecdotal evidence suggests this could well be the case, but with German archivists keeping schtum its precise former function remains a mystery for now.

Beyond this, the war looms large in the museum, to the extent that producers have actively sought it out when filming in Poland and neighbouring countries (“we once had to send sixty vehicles to Budapest,” recalls Patryk). As such, elements of the collection have appeared in over 100 films, among them Oscar-winning blockbusters like The Pianist.

And there are more than just cars alone. A hoarder’s heaven, every corner bulges with curiosities both great and small: British telephone boxes; rusting panzerfausts; piles of outdated home electronics; bullet scarred German street signs; and wobbly-wheeled bikes that span all descriptions. 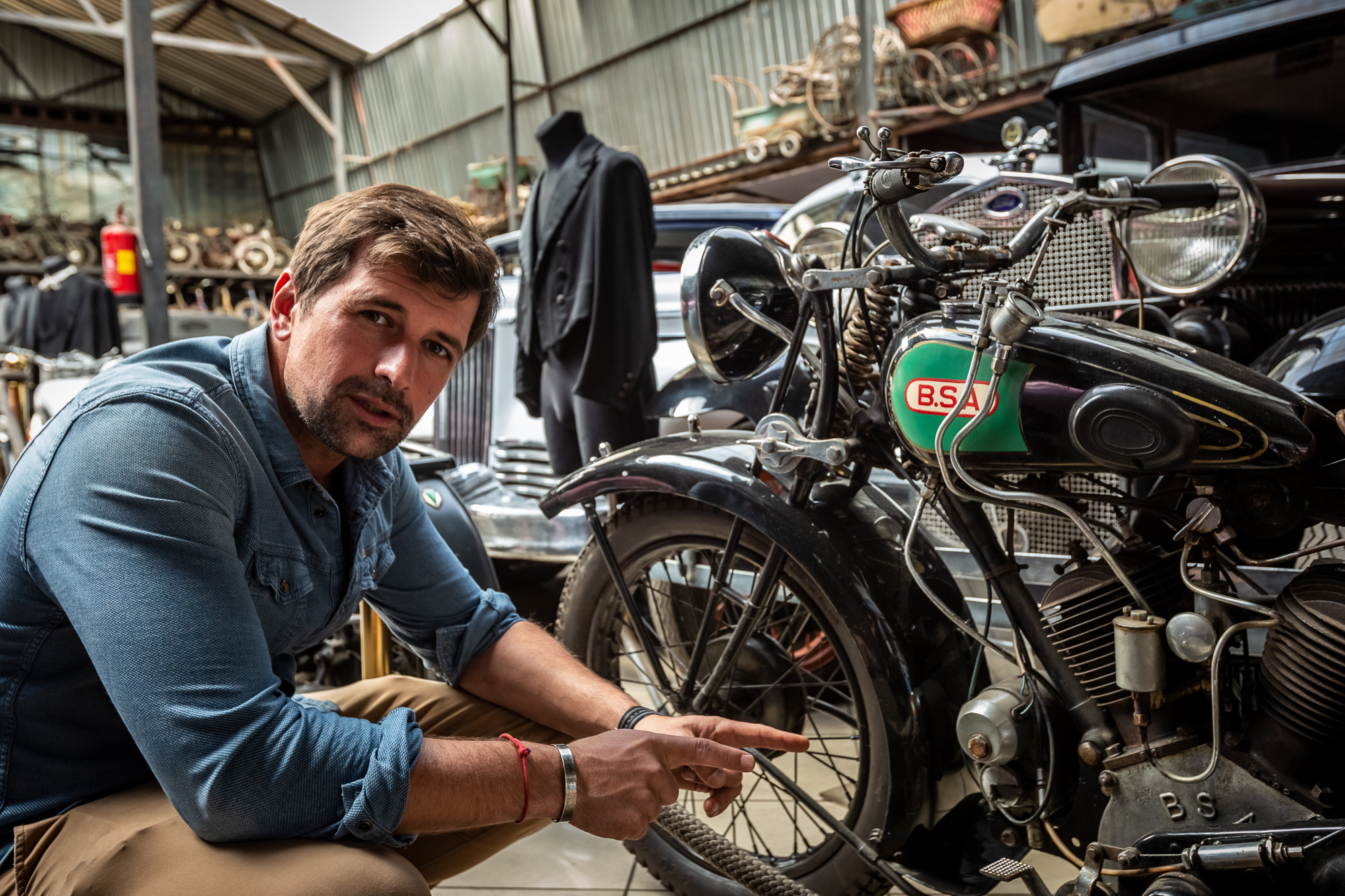 “For us,” states Patryk, “the most important thing about the cars we have here isn’t their body or their speed, the horsepower or the engine: it’s the history behind them.”Kalbar/TFN

Each darting glance acts to only divulge more unexpected glories: from Santa’s sleigh to a pink Buick Skylark via plush-looking rickshaws and children’s scooters. From a glass cabinet, boss-eyed dolls stare out like a scene from Stephen King, their gaze settling on collections of crash helmets and antique prams of all shapes and size.

Made all the better for its oily smells, musty recesses and dark, cobwebbed corners, it’s a complete departure from the dumbed-down, multimedia extravaganzas of the modern day. There is a passion here, a passion that makes for irresistible viewing.

Further, this underlying feeling of being somewhere special penetrates the core – more than a mere car museum, it is a place dripping with secrets and stories and eccentric diversions.  “For us,” states Patryk, “the most important thing about the cars we have here isn’t their body or their speed, the horsepower or the engine: it’s the history behind them.” Inside this Aladdin’s Cave, there is certainly much of that.

Popularity of electric cars in Poland continues to grow