With little in the way of fanfare and fireworks, this week saw one of Warsaw’s best-loved landmarks quietly regain its position as one of the capital’s true icons.

Welcoming guests since Monday, though yet to officially ‘launch’, the Prudential building’s revival as a luxury hotel marks the latest twist in this structure’s striking story.

Completed in 1933, and put into use the following year, what had originally been intended as an 11-storey tower was upgraded in the planning stages to top out at 16-storeys in all. Inspired by the skyscrapers that were trending in America, architect Marcin Weinfeld’s design didn’t just grow to be the tallest building in Poland, but also the second highest in Europe. At a stroke, the Polish capital had announced itself to the world as a nation reborn that was looking to the future.

Housing the offices of the Prudential insurance company on the lower floors, and extravagant apartments on the higher levels, it’s 66-metre height wasn’t lost on the nation’s nascent television industry, and in 1936 Professor Janusz Groszkowski crowned the roof with the country’s first TV transmitter: soon, Poland’s first TV broadcasts were being channelled right through it.

Taken as a whole, the building was a monumental achievement that spoke loudly of the capital’s ambition. Built using two million bricks, 2,000 tons of concrete and 1,500 tons of steel, it dwarfed it’s closest competitor, the 51-meter PASTa building, and embodied everything glorious and glamorous about inter-war Warsaw.

Though the majesty of the age was soon curtailed by the German occupation, Prudential’s significance was never lost on those living in the city. When the 1944 Warsaw Uprising broke out, it became one of the combatants key targets. Captured on the first day of battle by the Kiliński battalion, that the colours of Poland once more flew from the mast of the capital’s tallest building was a source of pride that galvanized the population. “When the Polish flag was hoisted from it,” wrote historian Alexandra Richie, “people left their homes just to look at it, crying and laughing and spontaneously singing the national anthem.” 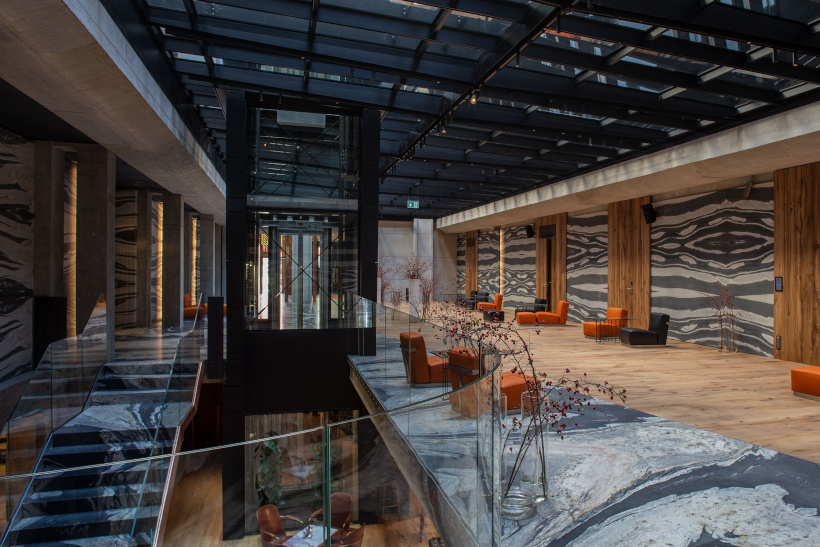 Accessed via a discreet entrance, visitors sweep into a marble-clad hall marked by a glass-covered ceiling that’s breath-taking in beauty. This, however, is but a prelude to the adventures that unravel.Hotel Warszawa

The Germans reacted by peppering the building with over 1,000 rounds of artillery over the course of the conflict – for the 63-day duration of the Uprising, it’s estimated a bullet zinged off the brickwork every eight minutes. Determined to seize it, the Nazis rolled out the big guns, and on August 28th, 1944, it was battered by a two-ton shell from a Karl-Gerät mortar. The building wobbled and creaked, but still the steel skeleton that had been designed by Stefan Bryła and Wenczesław Poniż refused to topple. Captured in black and white on field reporter Sylwester Braun’s Leica camera, this explosion that shook the structure has come to be regarded as one of the defining images of the Warsaw Uprising.

In boxing terms, the Germans had delivered the equivalent of a haymaker to the chin, but the pride of Poland clung stubbornly to the ropes as if issuing a challenge. On a subliminal level, Prudential’s dogged survival could be taken as an audacious sign of Warsaw’s indomitable spirit – only when the Home Army’s surrender was signed were the Germans able to finally retake it. 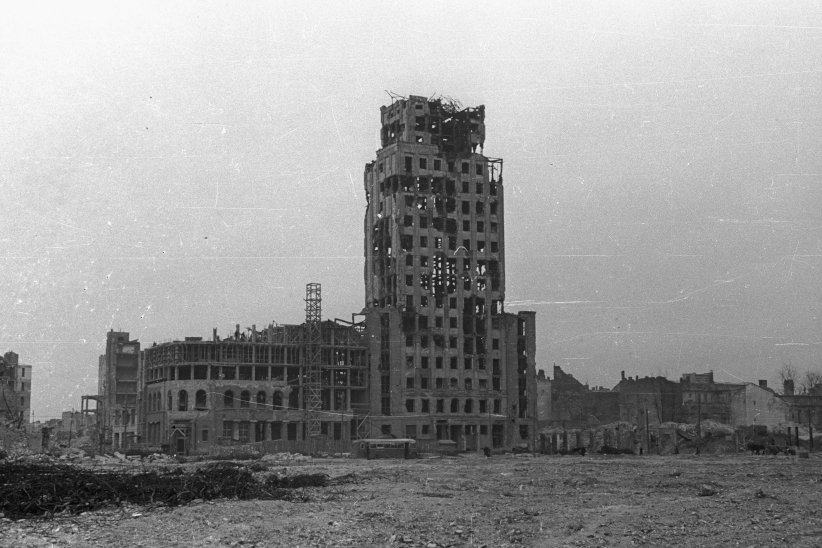 During the Warsaw Uprising, the Prudential Tower became a stronghold for Poland’s Home Army. Bombed to pieces, it nonetheless remained standing, its dogged survival an audacious sign of Warsaw’s indomitable spirit – only when the Home Army’s surrender was signed were the Germans able to finally retake it. PAP

Resuscitating it in the post-war years was the original architect, Marcin Weinfeld, who himself had lived through incarceration in Dachau concentration camp. Over 9,000 tons of debris were removed from the guts of Prudential, but with architects now forcibly aligned to follow the aesthetics of Socialist Realism, what followed was a bastardization of the original concept.

Reopened in 1954 as the Hotel Warszawa, additional floors were added whilst maintaining the building’s height, a move that left the building feeling gloomy and cramped. Neither did the use of inferior materials help, and by the time the Warszawa closed in 2003 it had the look of a miserable Eastern Bloc folly; as one guidebook wrote at its time of death, “it had become a place dusty, darkened corridors and gargoyle faced prostitutes lurking in the lobby.” It’s closure went un-mourned.

But if anyone had the capability to resurrect it, it was the Likus group. Revered for opening a string of top-class hotels in historic properties across Poland, their purchase of the building has culminated in the creation of one of the most memorable hotels to be found in Central Eastern Europe. 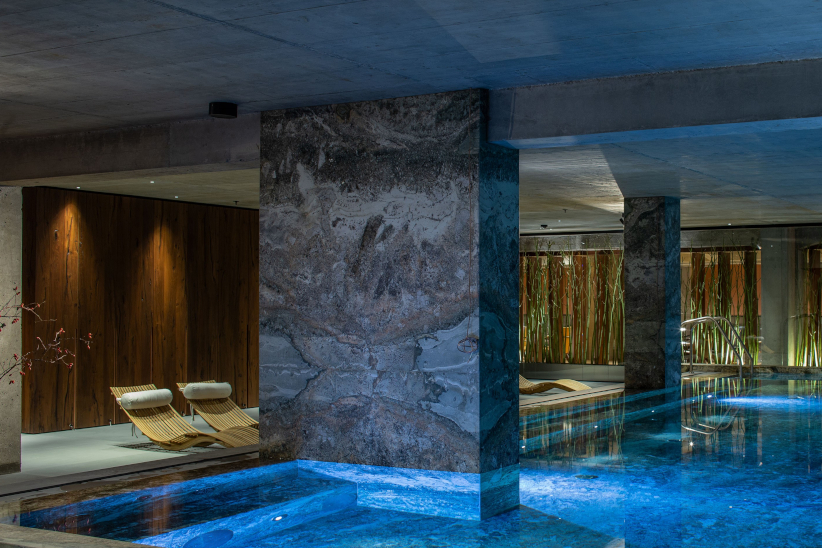 With Poland pausing to mark a centenary of her independence this weekend, it feels oddly appropriate that these celebrations coincide with the triumphant return of a building that has come to stand for the intrinsic Polish values of courage and hope.Hotel Warszawa

“We wanted to connect two worlds, the past with the future,” says Michał Grzybek, one of the small team of architects and designers employed in its revival. Looking to return the building to its pre-war heyday, Socialist elements were stripped and stored away, and the building’s original dimensions opened anew. “The aim was to get as close to the 1930s project as possible,” continues Michał, “for those unfamiliar with the building, we also wanted to surprise them a little with the interior elements, whilst for those who know the building’s past, we want them to think we’ve done a good job of continuing its history as a symbol of Warsaw.”

The results are stunning. Accessed via a discreet entrance, visitors sweep into a marble-clad hall marked by a glass-covered ceiling that’s breath-taking in beauty. This, however, is but a prelude to the adventures that unravel. Set below ground level, discover a well-heeled crowd gathering in a restaurant overseen by the award-winning chef Dariusz Barański. Featuring exposed steel supports that date from the 30s, the spectacular interiors are in tune with a modern Polish menu that’s left Warsaw’s blogging community in something approaching rapture. 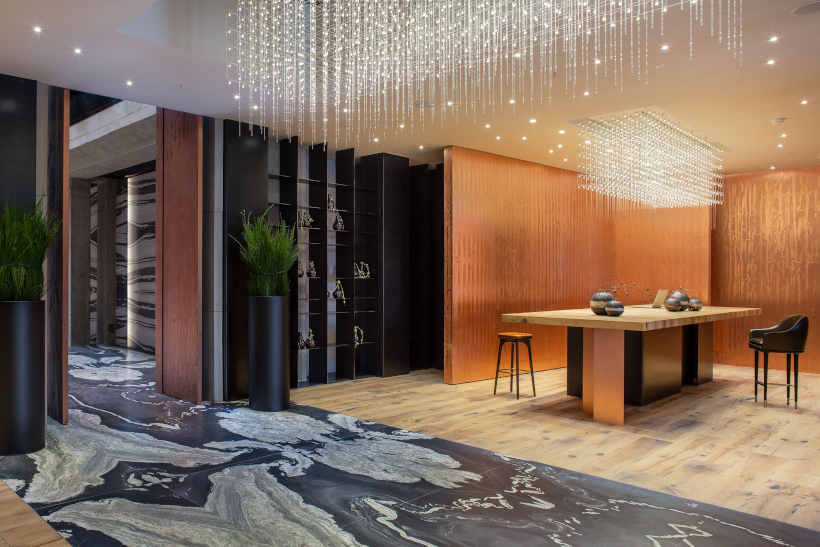 Revered for opening a string of top-class hotels in historic properties across Poland, the Likus group’s purchase of the building has culminated in the creation of one of the most memorable hotels to be found in Central Eastern Europe.  Hotel Warszawa

Above, meanwhile, rooms follow the Likus-wide love of natural materials: stone, marble, wood, copper, concrete, glass. Everything you touch is a sensory pleasure. Designed in a manner that makes many of its competitors appear gauche and ostentatious, it’s a hotel with a soul that feels personal and unique. And this is but the beginning, with both a spa area and a 6th floor restaurant complete with terrace still to be revealed.

The realization of the rebooted Warszawa was not without challenges. “For two-and-a-half years road closures connected  to the construction of the second metro line delayed our plans,” says Michał, “while our proximity to TVP’s recording studios meant we also had to proceed with extra sensitivy to our neighbour’s needs with regards to the noise.” In many aspects, though, this has proved serendipitous – with Poland pausing to mark a centenary of her independence this weekend, it feels oddly appropriate that these celebrations coincide with the triumphant return of a building that has, over the years, come to stand for the intrinsic Polish values of courage and hope.