Building up to the spirit in the sky: the story of Wilanów’s vast Temple of Divine Providence

It has been three years since the Temple of Divine Providence opened its doors to the faithful and held its first mass on November 11, 2016.

Since that time, the sacral building has drawn both admiration and criticism for its other-worldly design.

With its huge copper-plated dome floating above the new apartment buildings of Warsaw’s Miasteczko Wilanów enclave, some have likened it to a spaceship; others see a lemon squeezer. Meanwhile, those who venture inside are enthralled by the mystical simplicity of the capacious, light-drenched circular nave. 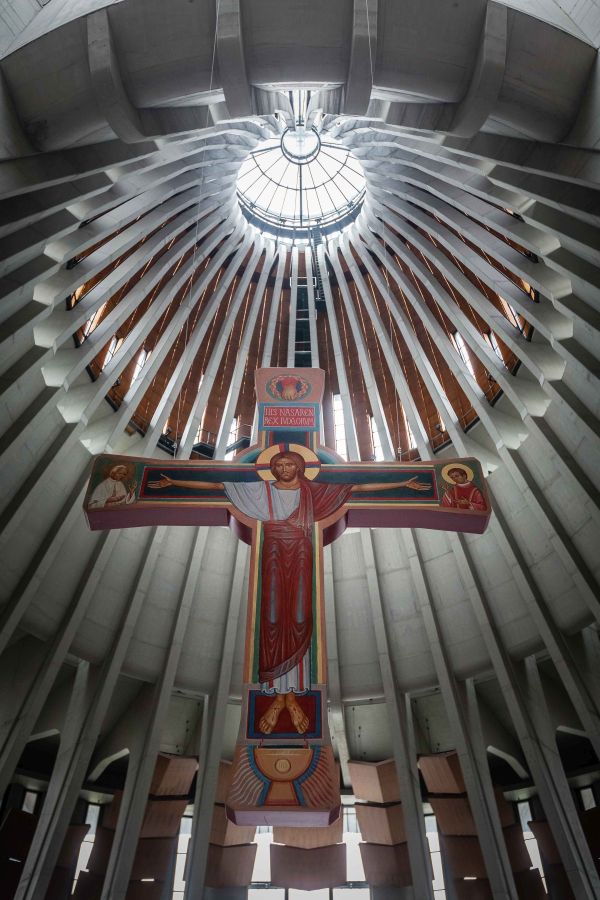 The cross is designed to give it a floating appearance.Kalbar/TFN

Whatever one’s aesthetic view, its figures impress. Set out in the form of a Greek cross, the edifice stretches over an area of 84x84 metres. Squeezed within this footprint is a vast central nave 68 metres in diameter, which can hold an eye-popping 4,000 worshipers.

Laid out across the nave like a silk sheet is over a quarter of a hectare of Calacatta Lincoln marble from the United States, which temple bosses assure they snapped up for a third of the market price after the initial buyer bailed out. 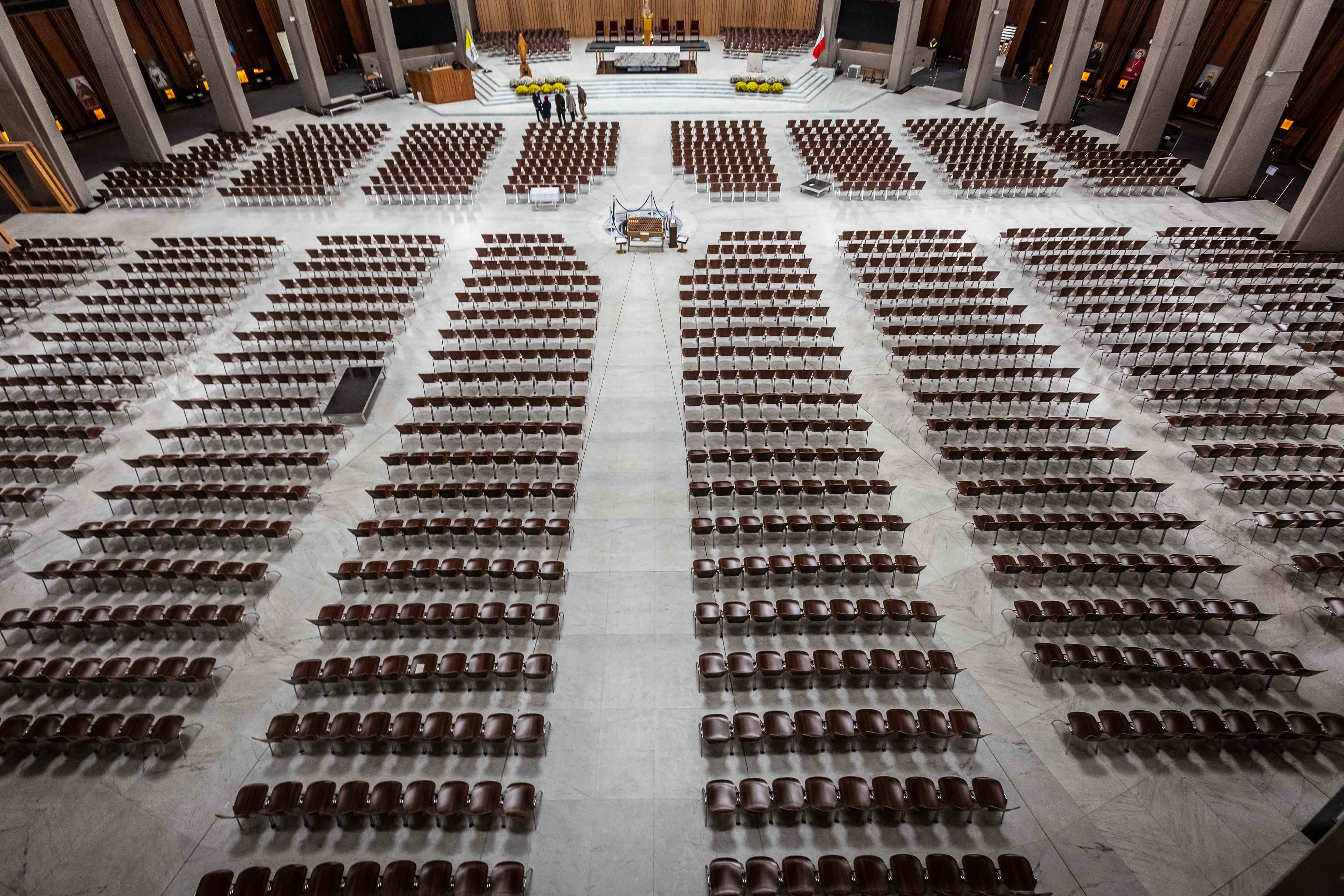 The church can hold a whopping worshipers.Kalbar/TFN

Making sure that parishioners’ feet stay warm is a corduroy expanse of underfloor heating pipes, which if laid out in a straight line would reach the northern boundary of Warsaw 19 kilometres away.

Rising toward the heavens is a 30-metre oval dome covered with 3,000 square metres of copper weighing over 30 tonnes, which was donated by Poland’s mega-mine KGHM.

When the five-metre cross that sits atop the dome is added, the temple’s 75-metre height makes it the tallest church in Warsaw. 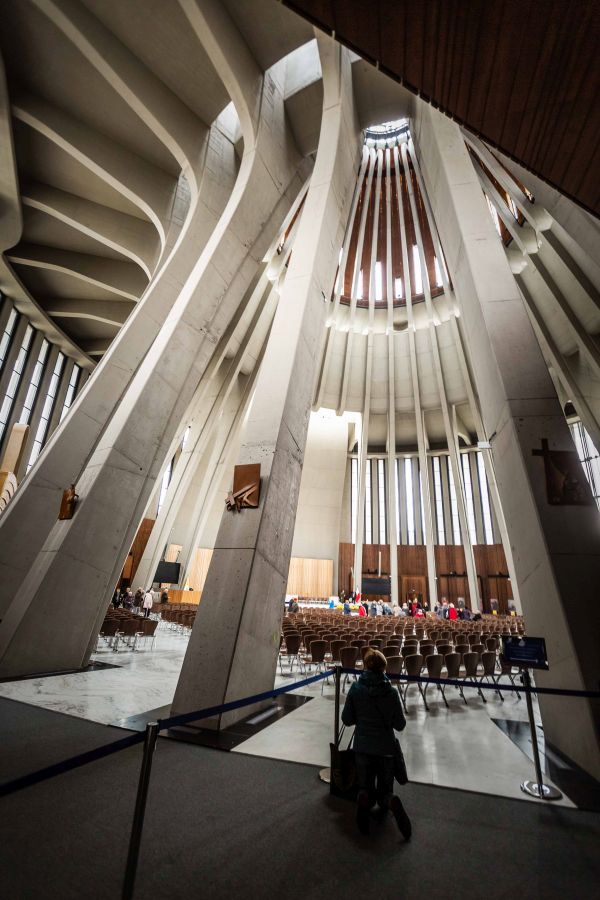 Twenty six pillars rise from ground level all the way to the dome’s peak, creating a kind of upturned chalice.Kalbar/TFN

All of this superlative engineering serves a very specific purpose, to say thank you to God for his divine providence. The temple aims to be a place that links providential events in Poland’s history with divine intervention. 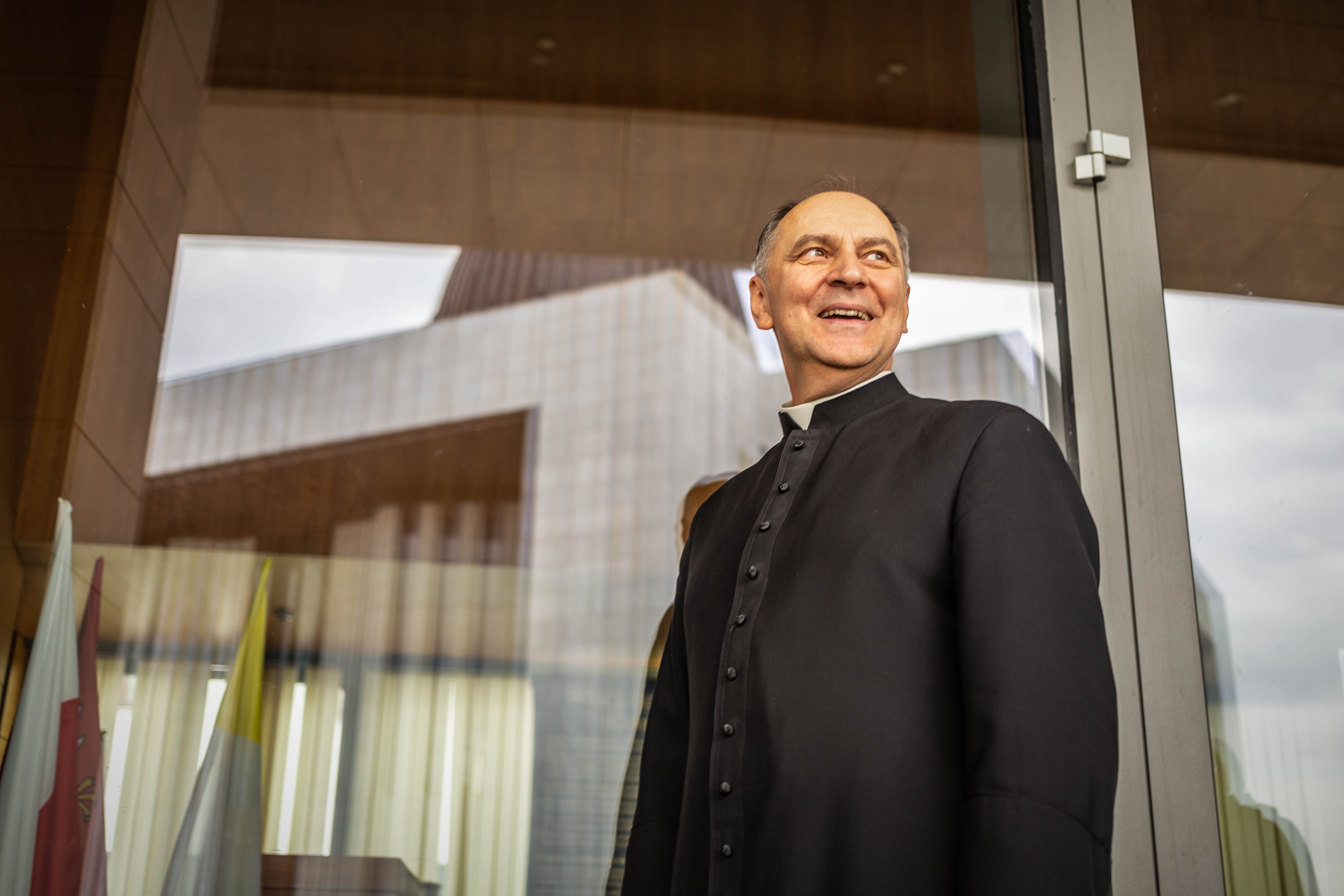 “On the spiritual map of Poland, it is a specific place where we give thanks for divine providence,” says Father Tadeusz Aleksandrowicz.Kalbar/TFN

These include the May 3 Constitution from 1791, the regaining of independence in 1918, protecting its territorial integrity in the Battle of Warsaw in 1920, the founding of Solidarity in 1980, the resumption of independence in 1989, the pastoral ministry of Archbishop of Poland Stefan Wyszyński and the pontificate of John Paul II.

They say it costs nothing to say thank you, but in the case of the temple, providing the setting to say these simple words came at a cost of at least PLN 220 million. Most of this amount, over PLN 160 million, has come from in excess of 100,000 private donors, whose names badge the temple in sizes depending of the size of donation.

A further PLN 60 million came from public subsidy, ostensibly to fit out the imminent John Paul II museum, which will float on four “bridges” that link the structure’s corners at a height of 26 metres. 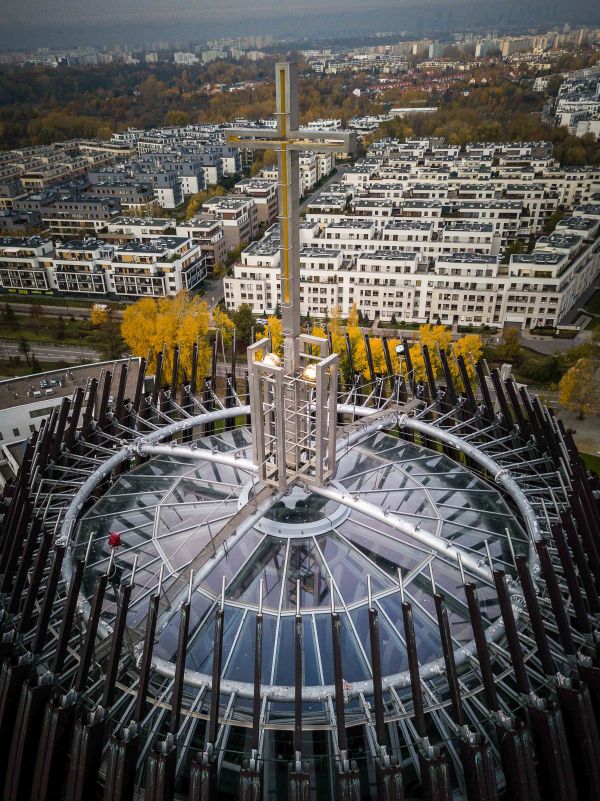 The five-metre cross that sits atop the dome is added, the temple’s 75-metre height makes it the tallest church in Warsaw.Kalbar/TFN

The thousands who flock to Wilanów for major state occasions and for regular Sunday masses have had to dig deep into their reserves of Christian patience to finally enjoy the temple’s fruits.

Cardinal Glemp first broke ground with a shovel back in 2002, but the original idea for a temple of thanksgiving for divine providence goes back 228 years to the reign of Stanisław August Poniatowski when in 1791 the Four-Year Sejm committed to the building of a church as a votive for the May 3 Constitution. 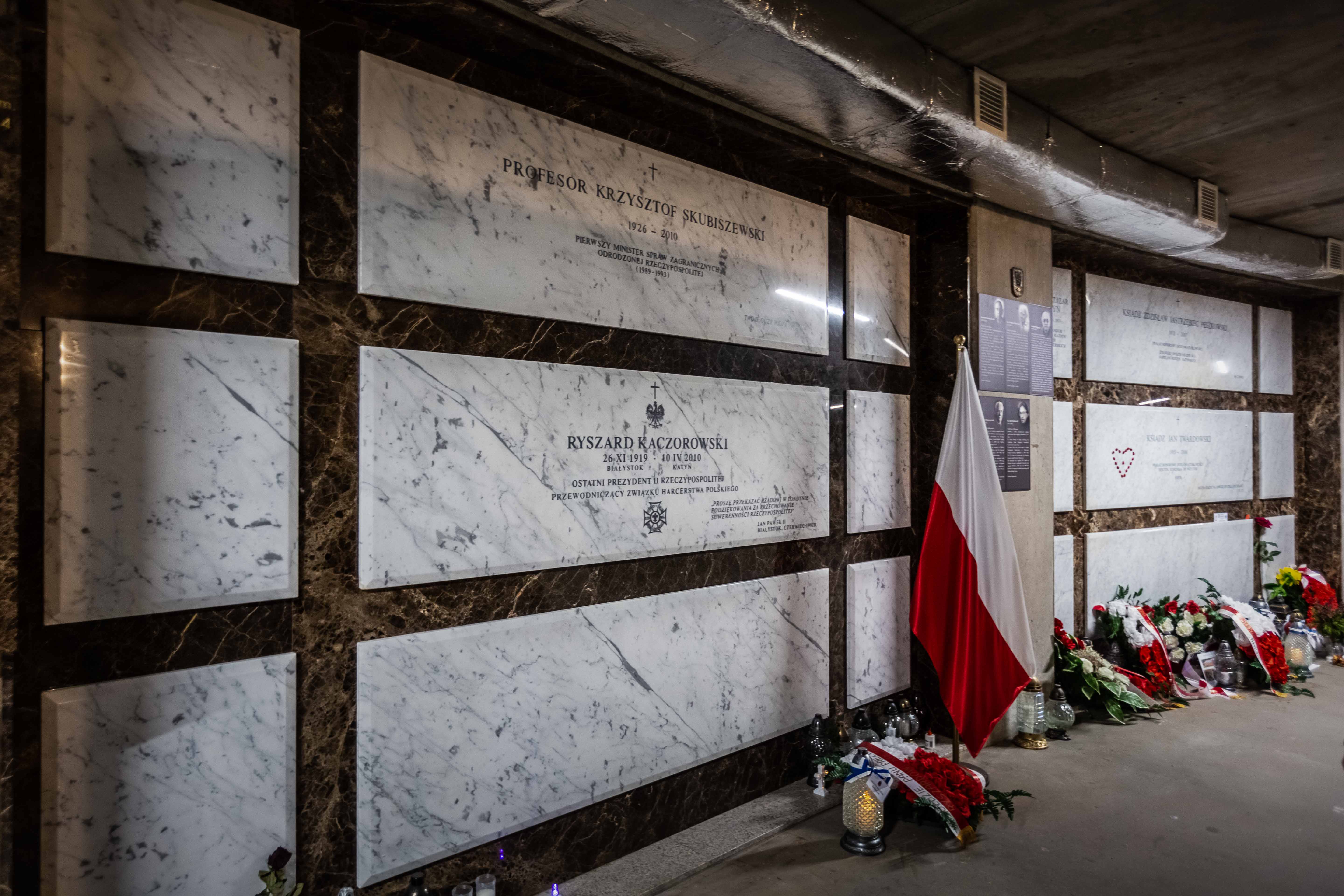 The remains of Ryszard Kaczorowski, the last President of the Republic of Poland in Exile, are interred in the church.Kalbar/TFN

The king selected the design of his royal architect Jakub Kubicki, which envisaged a classical temple based on a Greek cross. Work started in the grounds of Ujazdowski Castle, but was halted when Catherine the Great attacked Poland with an army of 100,000 soldiers. A small ruined fragment of the temple still survives in Warsaw’s Botanical Gardens.

After the long night of the partitions, the plan was revived after Poland regained its independence. An initial idea was to transform the Russian-built Aleksander Nevsky Cathedral, which towered over Saski Square (today’s Piłsudski Square).

Finally, a design by Poland’s mid-century architect Bohdan Pniewski was selected to be built on Pole Mokotowskie. Building work on his New York-style skyscraper was continually put off until the outbreak of World War Two shelved it forever. 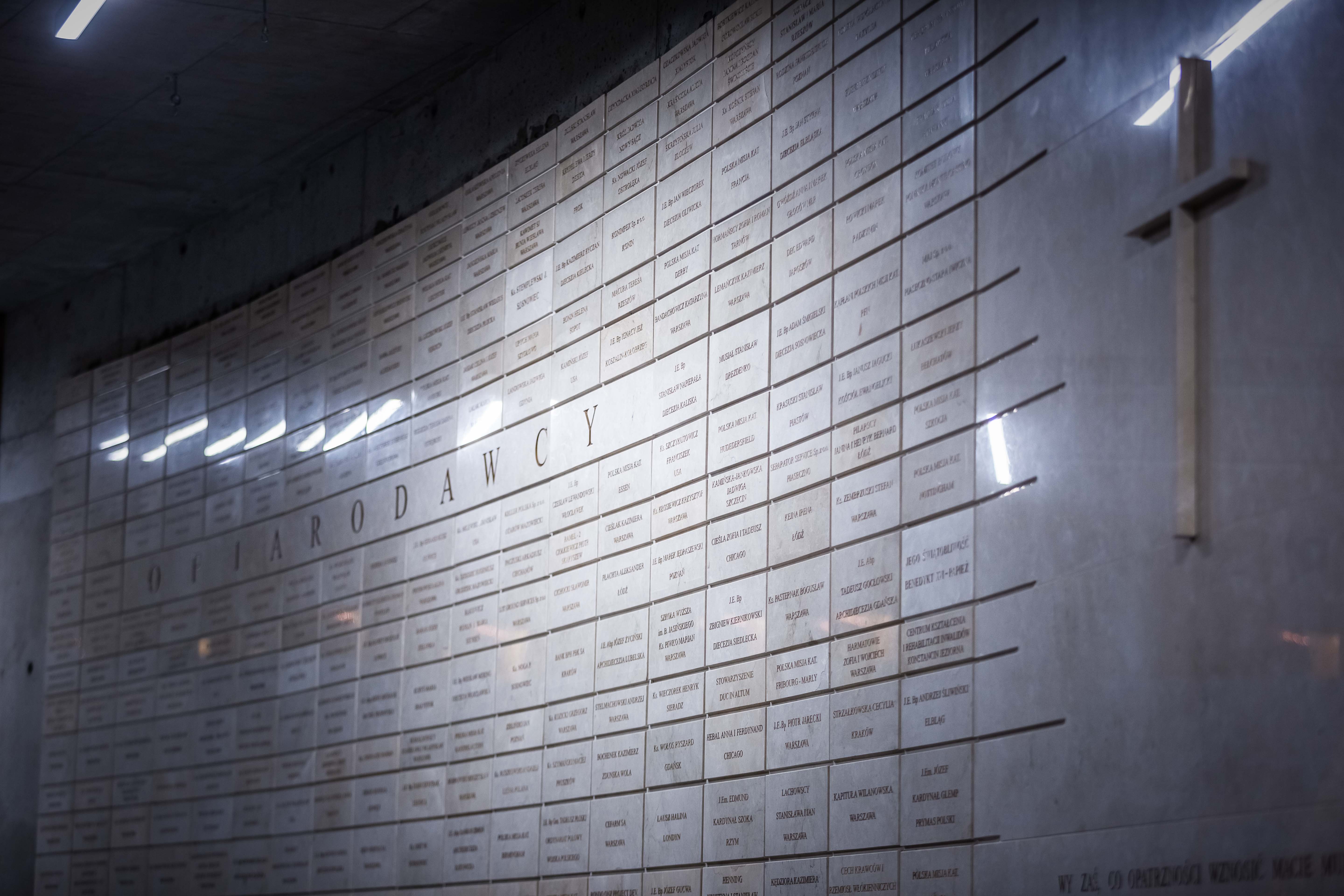 The names of donors live forever.Kalbar/TFN

After 1989, an idea was put forward to build an artificial island on the Vistula and build it there. A design was finally selected, but the cost of Marek Budzyński’s visionary, ecological concept scared off church bosses.

What we see today on the corner of Rzeczypospolitej Avenue and Hlonda Street is Wojciech and Lech Szymborski’s Greek-cross design.

Though boxy in appearance from the outside, its interior is breath-taking. Twenty six pillars rise from ground level all the way to the dome’s peak, creating a kind of upturned chalice. At the top of the dome is a heavenward-looking oculus that resonates with resurrection symbolism.

The ark-like temple is stuffed full of remains, objects and relics that tell the story of Poland’s Christian history. 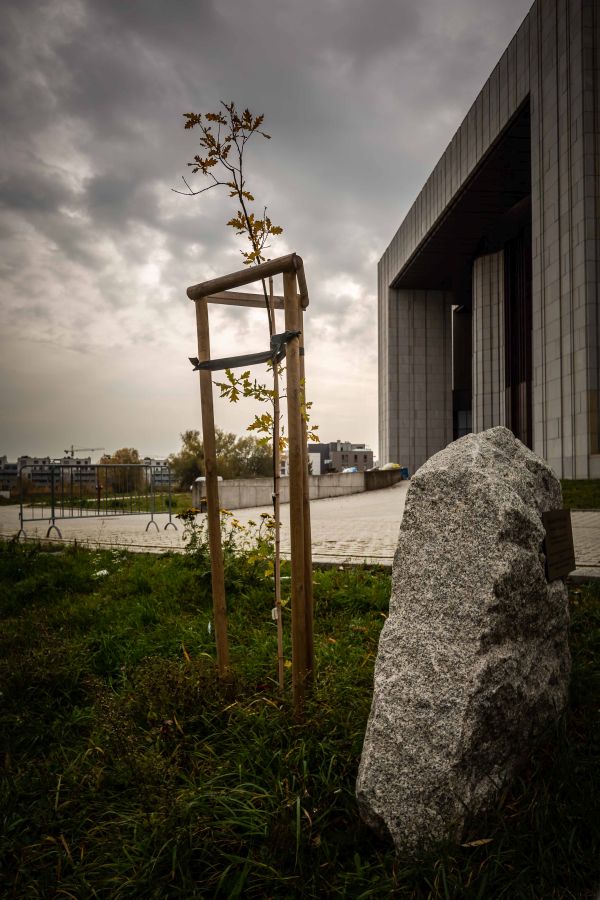 One of seven oaks planted to celebrate the 100th anniversary of Polish independence in 2018.Kalbar/TFN

Placed in recesses in the outer wall of the nave are relics including those of John Paul II, Jerzy Popiełuszko, Stanisław Papczyński, Saint Faustyna and Saint Maksymilian Kolbe. Future plans envisage having relics of all the Polish saints encircling the nave.

A side chapel houses what the church claims is a piece of the original cross on which Jesus was crucified, which was brought to the temple in September last year.

The temple has not yet been filled with altar art and other decorations and as such there is a palpable sense of work in progress. However, stripped down to its essentials, the architecture emanates an air of purity and minimalism, which has proved popular with many visitors.

The central attraction in the main church is a 26-metre S-shaped concrete slab, which sits in the altar position on top of a five-step podium. In front of this is the Holy Cross, which floats above the chancel giving a sense of levity and lightness. 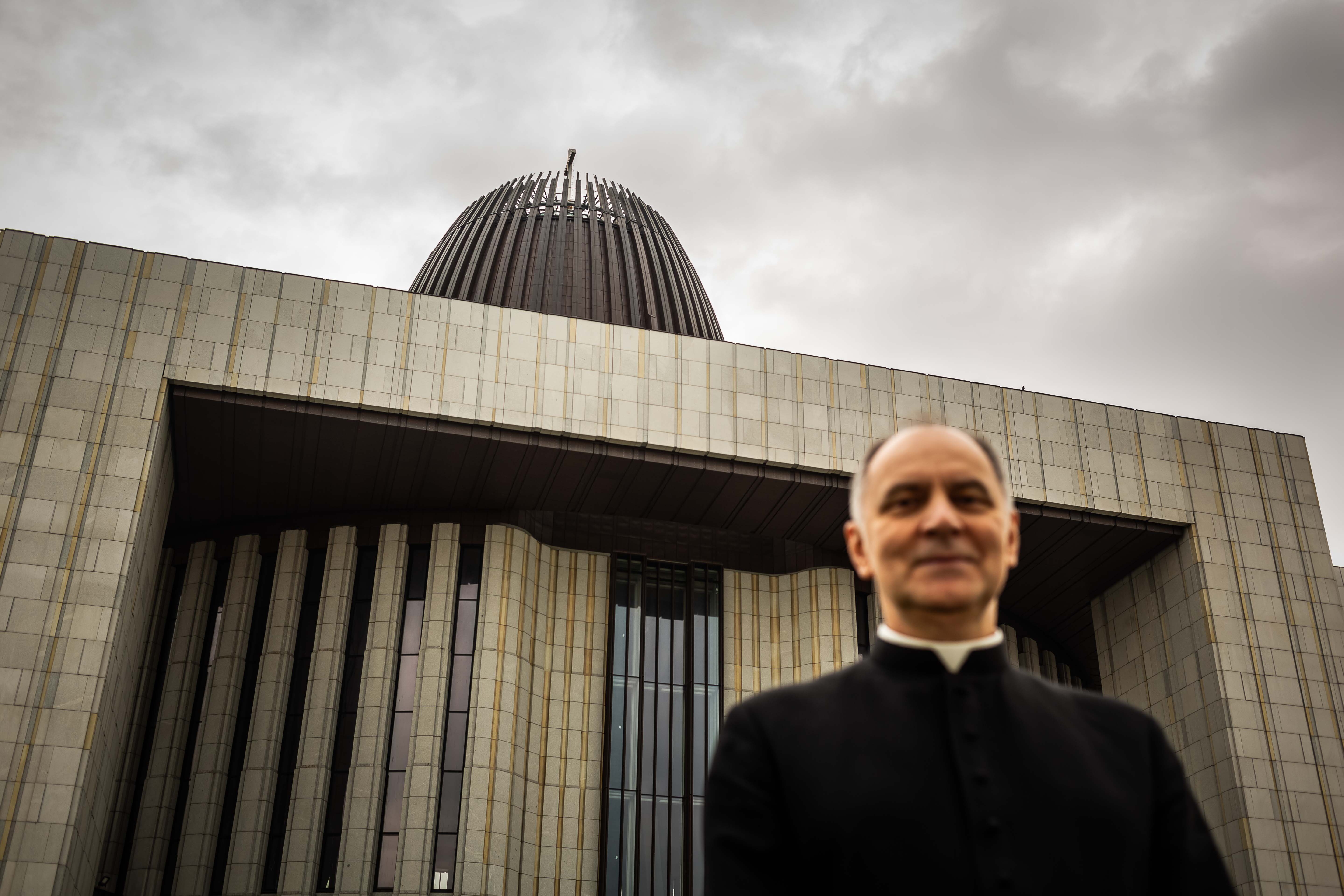 Father Tadeusz says, thanksgiving is at the heart of temple’s spiritual mission.Kalbar/TFN

Until recently, the chancel featured the chair on which John Paul II sat during his famous first mass in Warsaw in 1979, as well as the pulpit from where he called on Poles to sweep away the ruling Communists; however, these will now appear in the John Paul II museum, which is due to open early next year.

Underneath the nave is the Pantheon of Great Poles where the remains of important Poles are interred. It features a symbolic tomb for Pope John Paul, which is a replica of his tomb in St. Peter's Basilica.

Among those in the pantheon are the last President of the Republic of Poland in exile Ryszard Kaczorowski, the first Minister of Foreign Affairs Krzysztof Skubiszewski after 1989, the poet Jan Twardowski and the priests who died in the Smolensk catastrophe. 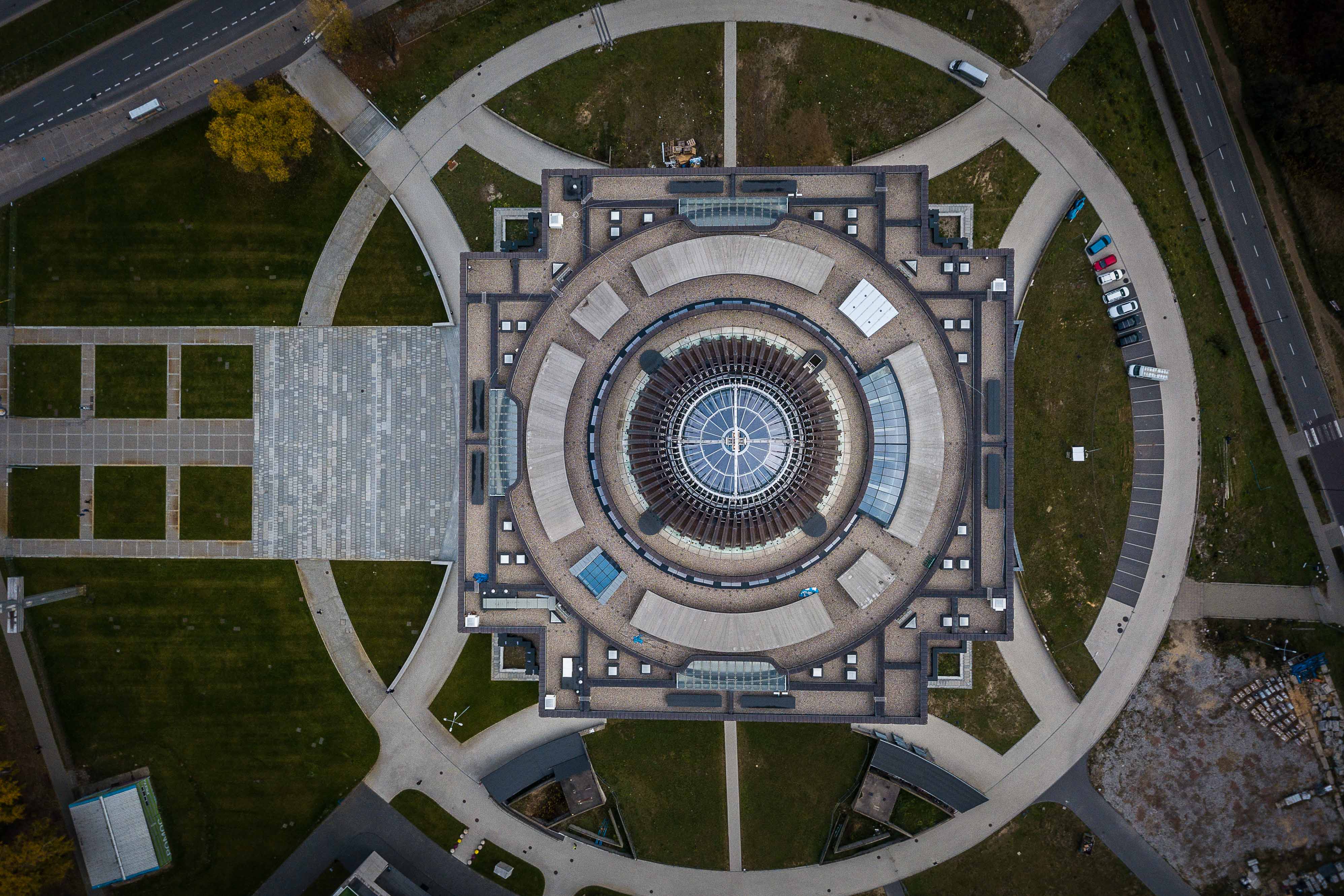 Set out in the form of a Greek cross, the temple stretches over an area of 84x84 metres.Kalbar/TFN

Outside, in the yet to be finished grounds, an avenue of seven oak trees was planted a year ago on Independence Day giving thanks to the fathers of Poland’s independence.

As Father Tadeusz says, thanksgiving is at the heart of temple’s spiritual mission. Evidence of this comes on the form of the more than 100,000 votive letters that the temple has received by email and post by Poles wanting to give thanks to God for past blessings or in the hope of future providence.

All these missives are crammed into giant golden balls. Two of these are currently nested at the base of the cross on top of the dome, thereby shortening the odds of receiving a divine response from the heavens.