Nestled in a valley alongside the Dunajec river tributary, the historic resort of Szczawnica is getting a second lease of life.

The descendants of the local spa owner returned to finish and expand on their great grandfather’s work and bring back the town’s spirit. 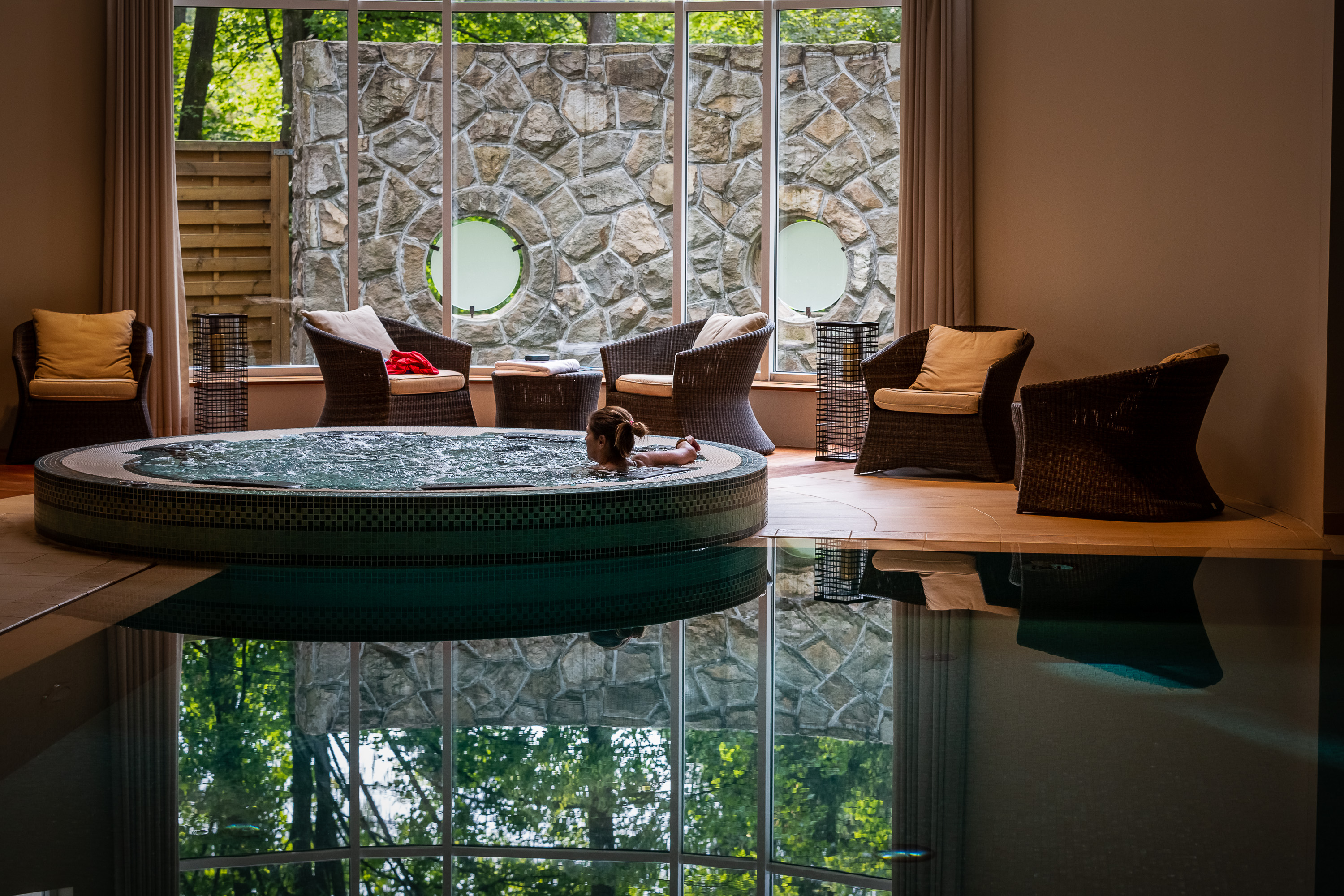 What is crucial in Thermaleo Group’s activities, is the desire for the highest standards when it comes to design, ecology and service.Kalbar/TFN

Located on the border of Pieniny and Beskids mountain city in the south of Poland, Szczawnica may not have the fame of Zakopane or Krynica, for good and bad, but the smaller (6,000 locals, not counting the tourists) and more intimate resort has a lot to offer, from beautiful ranges and thick forests to a friendly town with an expanding offer of spas and accommodation.

“We are at a dead end. You don't arrive in Szczawnica by accident,” says Helena Mańkowska, vice president of Thermaleo Group, and one of the siblings behind some of the town’s most recognizable venues, including hotels, restaurants, cafes, a cultural centre,  a museum and even parks.

The town’s fate took a turn in 2005 when the descendants of Count Stadnicki reclaimed their land and property.Kalbar/TFN

Her ‘dead-end’ remark can be understood both metaphorically and literally, as the mountain road ends after the next two villages. In 1857, one of the people who ventured here was Józef Dietl, a physician and promoter of balneology, who saw the potential in local thermal springs.

First owned by Józef Szalay and then by the Academy of Learning in Kraków, the spa resort made its name in Poland and abroad. At the turn of century, Szczawnica’s spa resort once again changed hands. Helena said: “Our great grandfather Adam Stadnicki was very young when he lost his father. He was the only child which was very strange, not typical for this kind of family. Our grandparents had 8 or 9 brother and sisters. 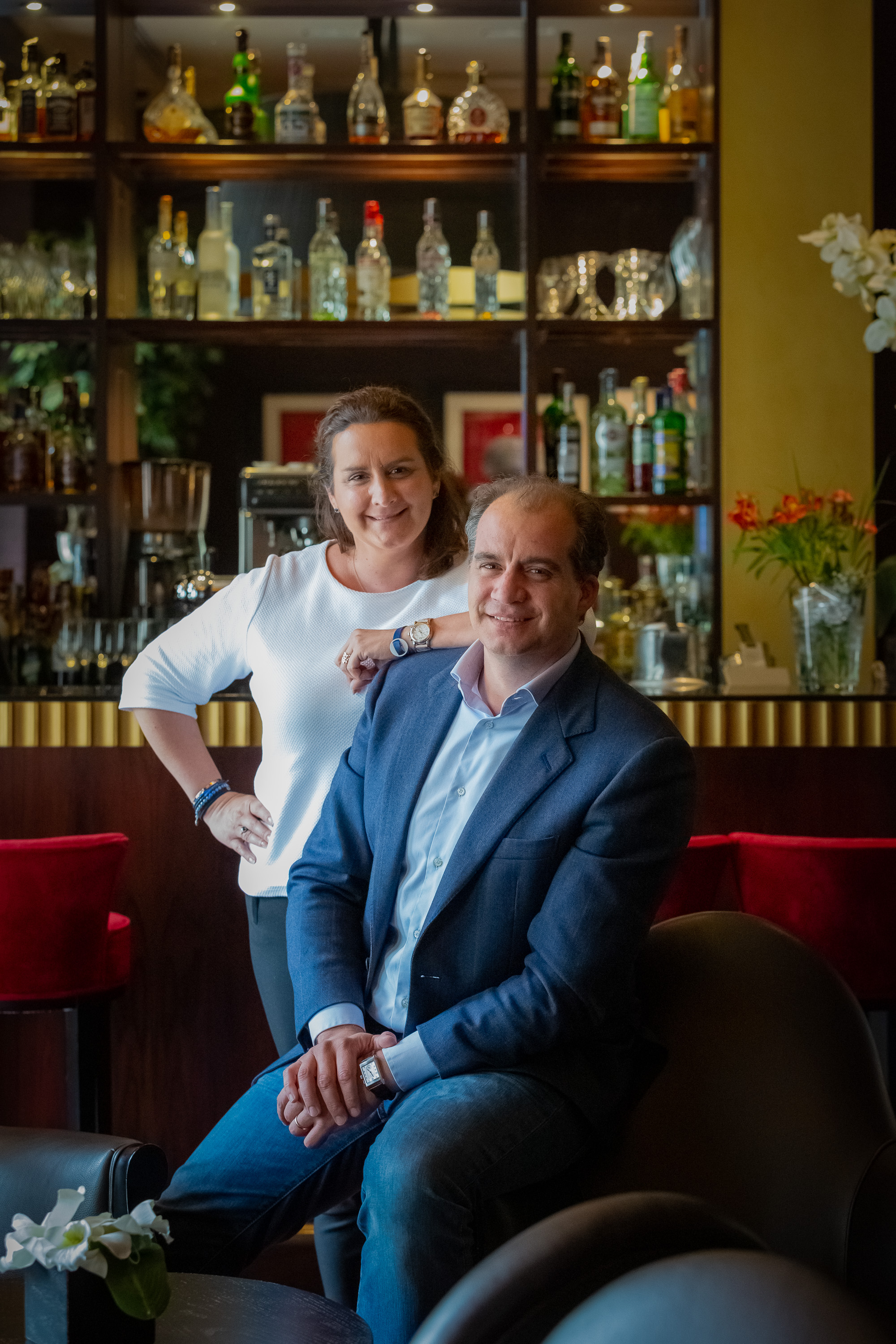 Raised in France, Helena Mańkowska and her brother Nicolas moved to Szczawnica to finish and expand on their great-grandfather’s dream of turning the town into a luxury resort. Kalbar/TFN

“He was alone and he had a lot of possibilities. When he was 27 he was pushed to buy the Szczawnica resort, which he did in 1909. He had many ideas, wanted to develop it, bring a train here. After the war arrived, everything stopped. This part of family lost everything.” 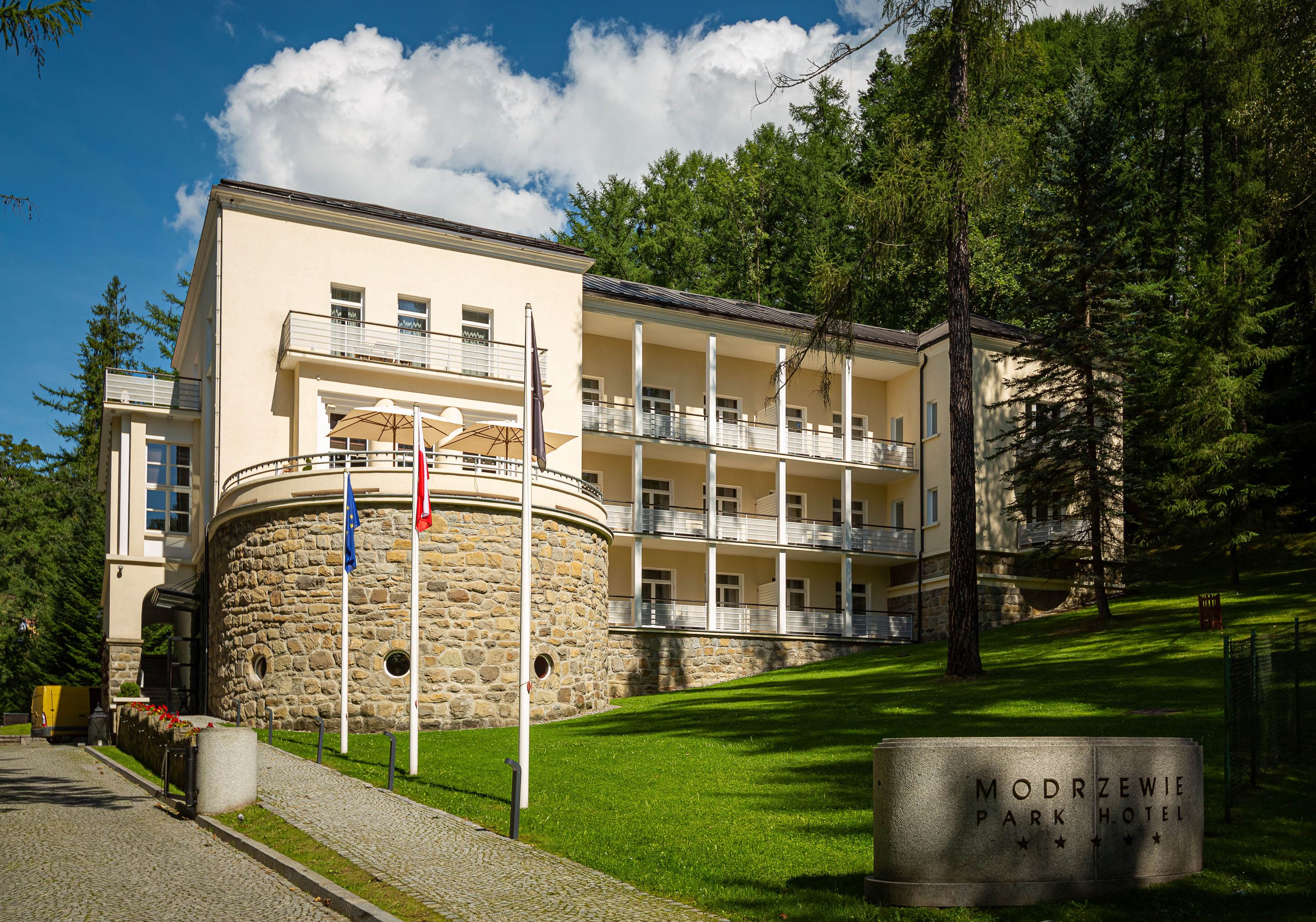 The 5-star Modrzewie Park Boutique Hotel quickly became a refugee for artists and celebrities with the modernist villa being surrounded by a park and high larches, hiding it from view.Kalbar/TFN

Under Count Stadnicki’s management, the resort developed, with the construction of Inhalatorium, equipped with pressurised cabins, a peak of technology for that time and new connections, allowing more and more guest to arrive. Similar to Zakopane, Szczawnica was a favourite spot for the artistic bohemians, such as actress Helena Modrzejewska, opera singer Ada Sari, painters Jan Matejko, Wojciech Kossak and Henryk Siemieradzki. Even Polish inter-war president Ignacy Mościcki visited. 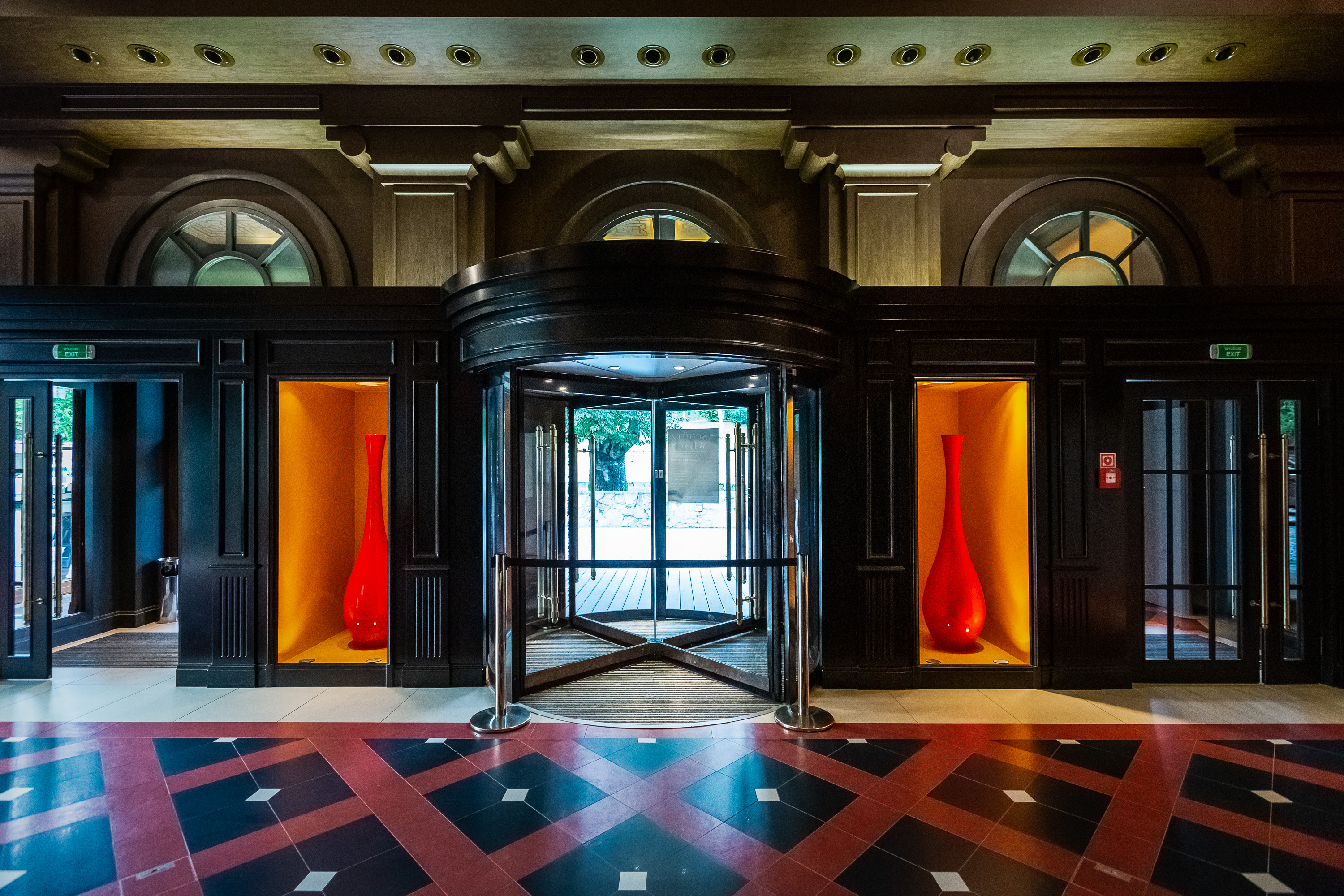 World War II halted the works inside the resort, while in the aftermath of the Communists taking over Poland the entire complex was nationalised. The newly established National Szczawnica Spa Company quickly did away with the town’s noble origins and constructed several mammoth block of flats style sanatoriums named after valued workers groups, such as Hutnik (Metalworker), Nawigator (Navigator) or Budowlaniec (Builder). Szczawnica, once a pearl similar to those in Italy or Switzerland, slowly descended into ruin. 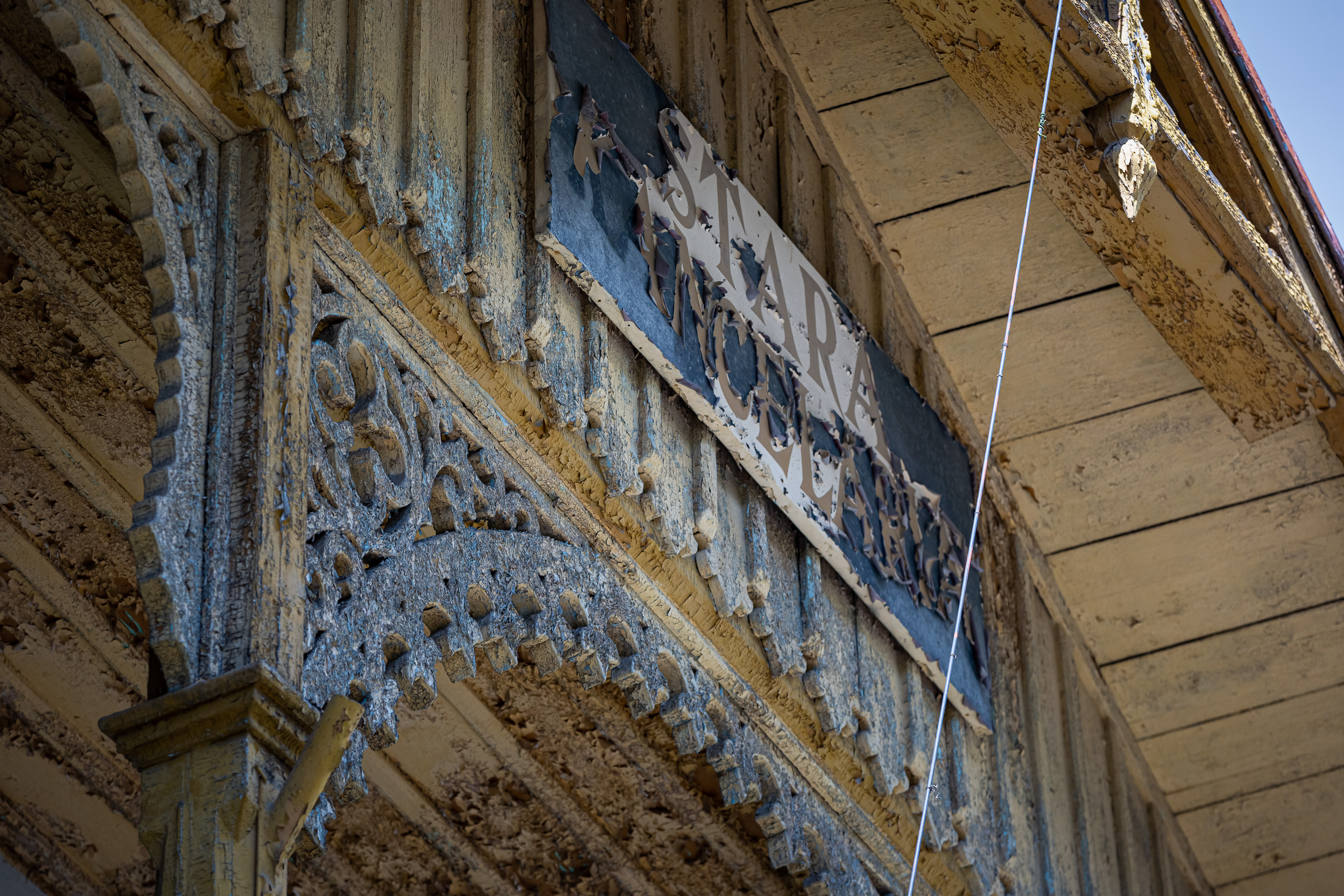 The town’s fate took a new turn in 2005, when after four years the descendants of Count Stadnicki reclaimed their land and property, among them are some of Szczawnica’s most recognizable features – Inhalatorium and buildings around the central Dietla Square. 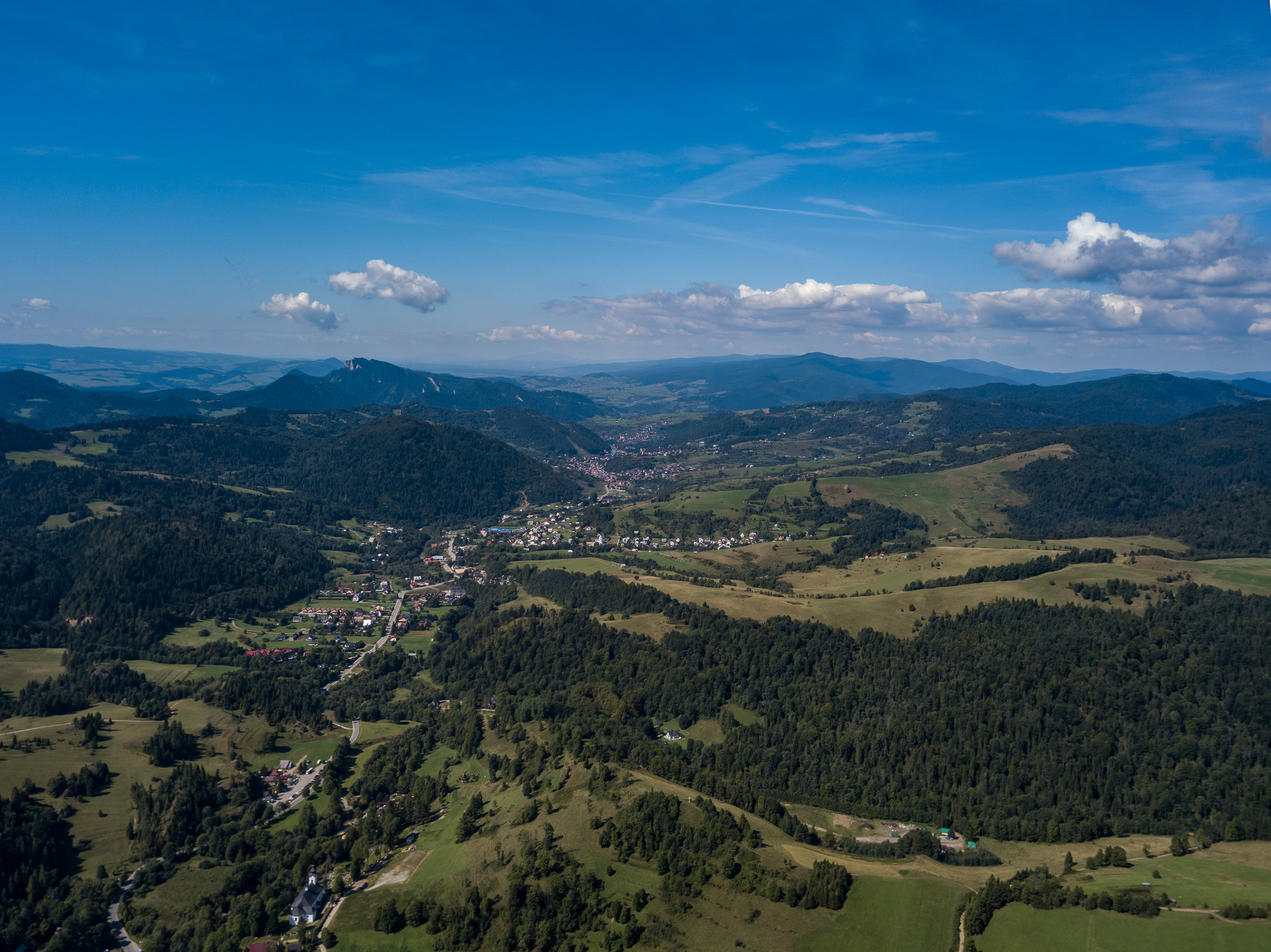 In 1857, one of the people who ventured here was Józef Dietl, a physician and promoter of balneology, who saw the potential in local thermal springs. Kalbar/TFN

Nicolas Mańkowski, Thermaleo Group’s president explained: “ We wanted to protect it, not just the investment, but also the nature, the architecture and our philosophy for the development. We wanted to recover the old spirit of the town and rebuild it in the old design and traditions.” 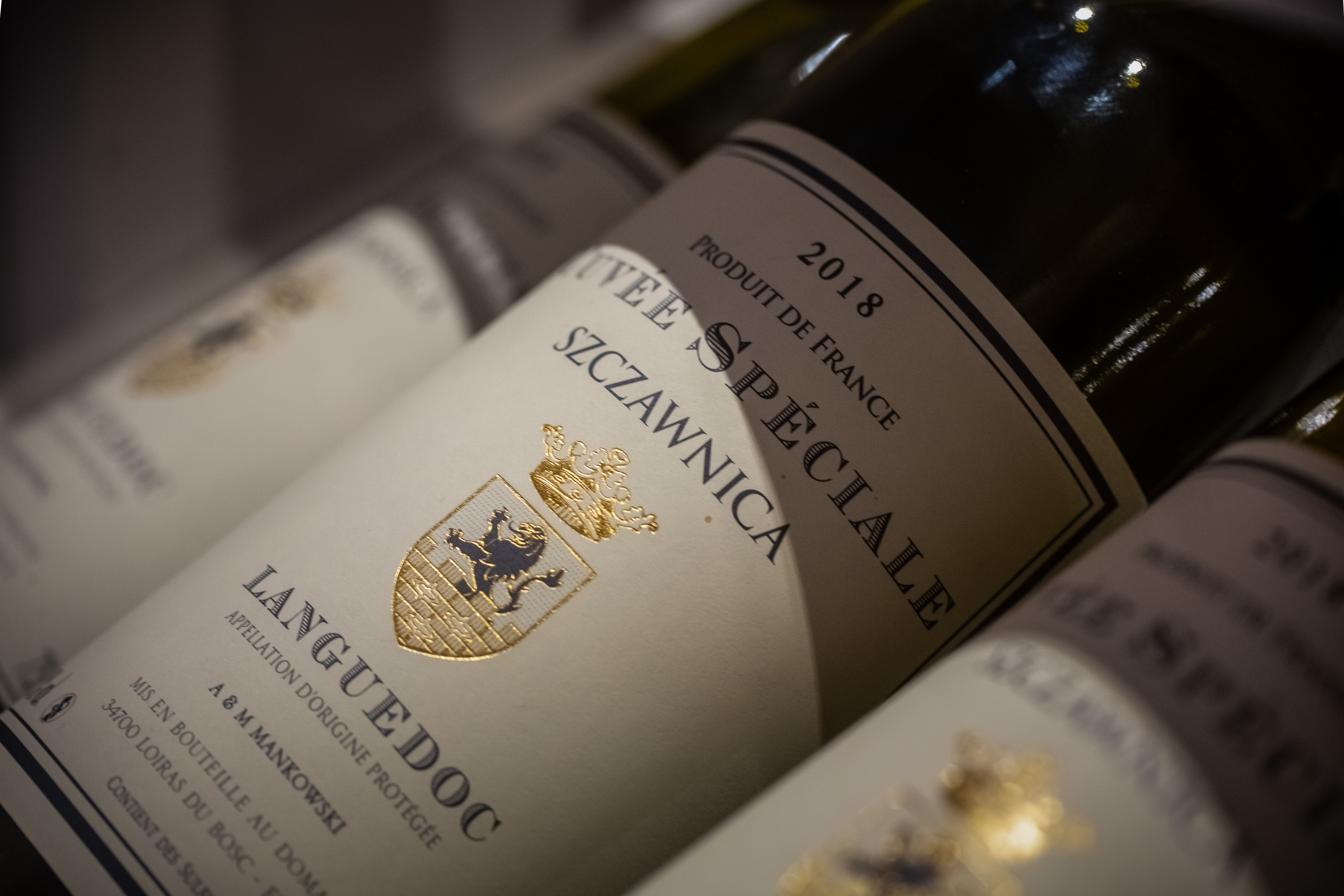 The resort even has it own specially produced wine. Kalbar/TFN

At first it was his father Andrzej and older brother Krzysztof who began the investment. While the entire family was living in France, Andrzej running a successful IT company, involvement in Szczawnica was a life-changing decision, dictated both by business intuition and sentiment. 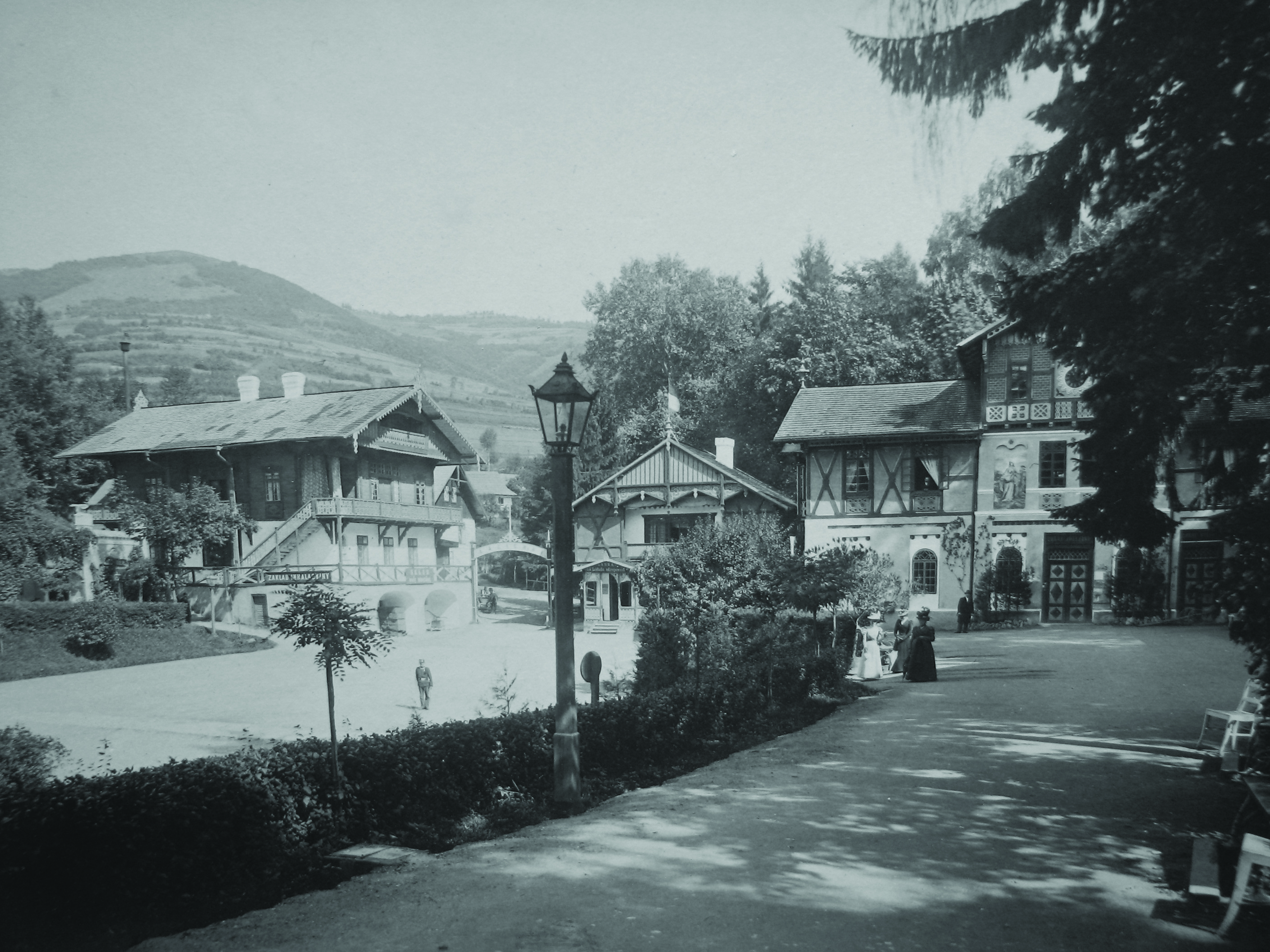 The Szczawnica of bygone years is what the siblings are looking to return.Thermaleo Group  & Uzdrowisko Szczawnica

“We are all like this. You know, our father started from nothing. He left Poland, came to France, he was trying to find his way, starting out by selling pancakes and then he finished by having a big company,” said Helena. 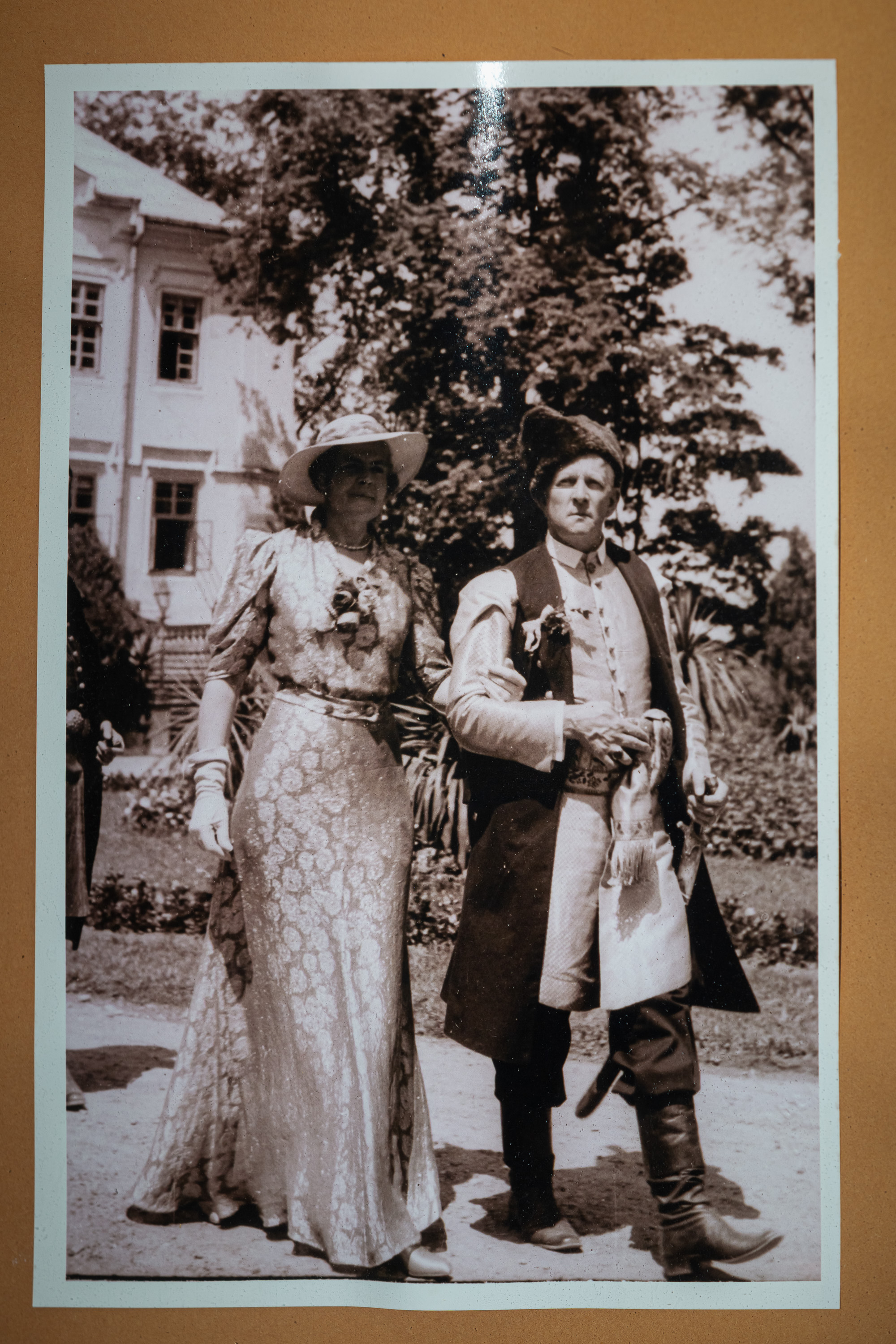 Count Stadnicki and his wife Stefania.Kalbar/TFN

For her the move to Poland was not an instant decision. “I remember the first time I arrived here, it was even before working here, because at first our brother came here and started the project. I was personally not imagining that I would work here. I was living in Paris, having a good job, getting a promotion. 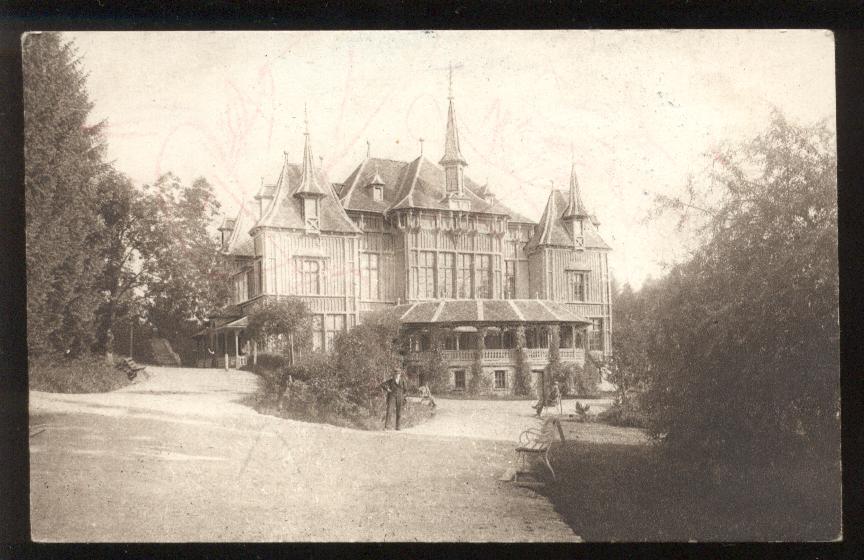 “The thing is little by little we got invested in the project. I think when you are captured by a place and you have a vision, we had a vision about the place and its potential,” she recalls. Now their brother Krzysztof has moved on to different projects, while Helena and Nicolas divide their time between Szczawnica and Warsaw. Just like their great grandfather, the siblings have a vision of what the resort could become and little by little, they are putting it in place. 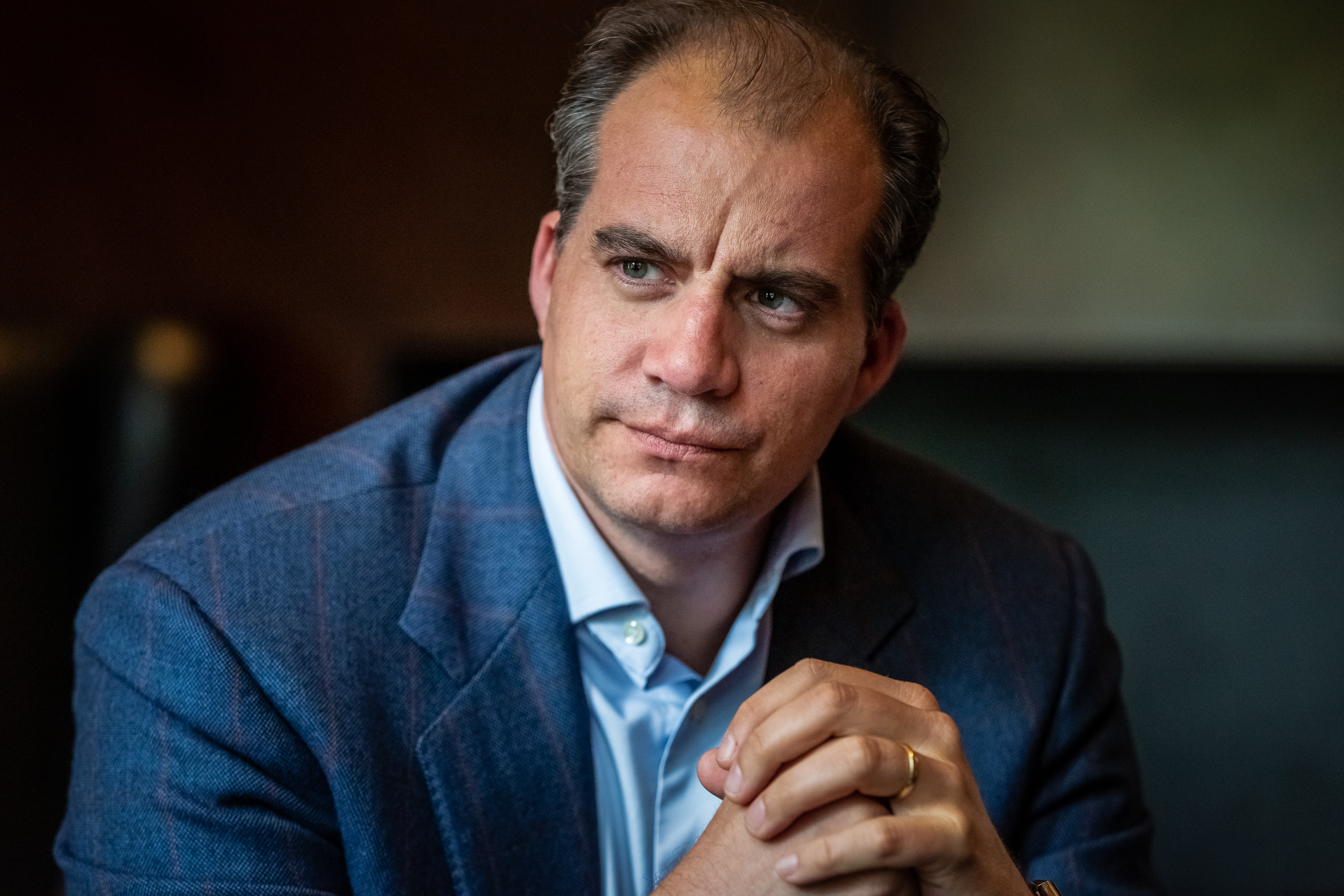 Explaining their decision to leave France and move to Szczawnica, Nicolas Mańkowski told TFN: 'We wanted to protect it, not just the investment, but also the nature, the architecture and our philosophy for the development. We wanted to recover the old spirit of the town and rebuild it in the old design and traditions.'Kalbar/TFN

Nicolas explained: “For the first ten years we developed Szczawnica as a destination, put it back on the map, put it back in people’s minds.” The family first worked on the Mineral Water Bar, where guests could taste the famous spring waters Helena, Jan, Stefan, Józefina and Józef, then the 1960 Café Helenka, renovated in French style, the surrounding Dietla Square and a museum. 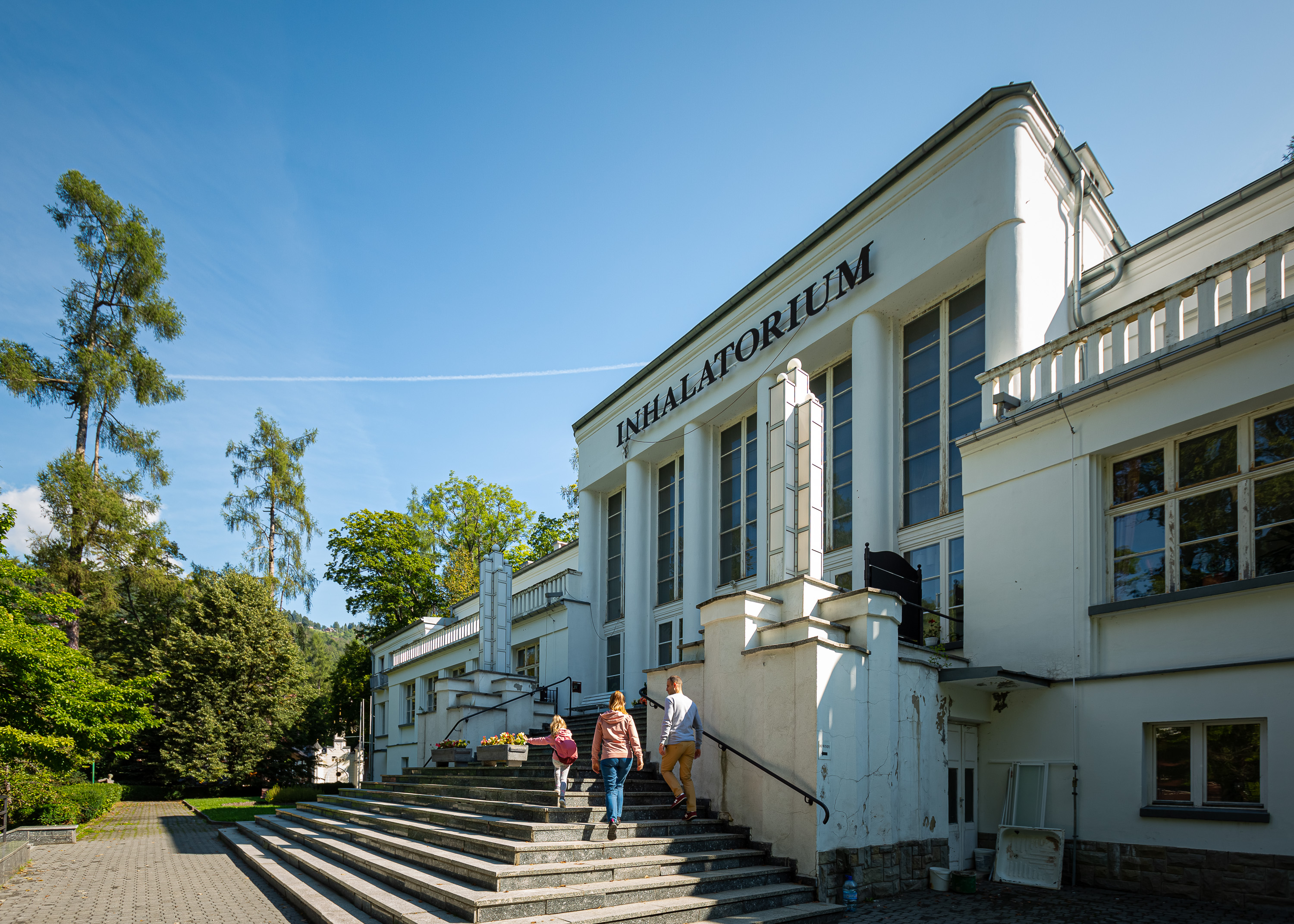 Built between 1934-1936 by Adam Stadnicki, Inhalatorium was a marvel of technology and rehabilitation methods that utilised the local spring waters.Kalbar/TFN

One of more surprising moves, business-wise, was opening the five-star Modrzewie Park Boutique Hotel which because of its homely atmosphere quickly became a refugee for artists and celebrities wanting to rest in its intimate space. The modernist villa is surrounded by a park and high larches, hiding it from view.

The crucial passion project, which proved to have strategic importance was Dworek Gościnny, famously rebuilt without any plans but based on an old postcards. The wooden structure opened in 1884 housed a ball room, entertainment hall and a café. Now it is once again the cultural centre of Szczawnica, serving as a concert hall, theatre, cinema, jazz bar and hosting any event the guests can imagine wanting to have, from weddings to fashion shows. 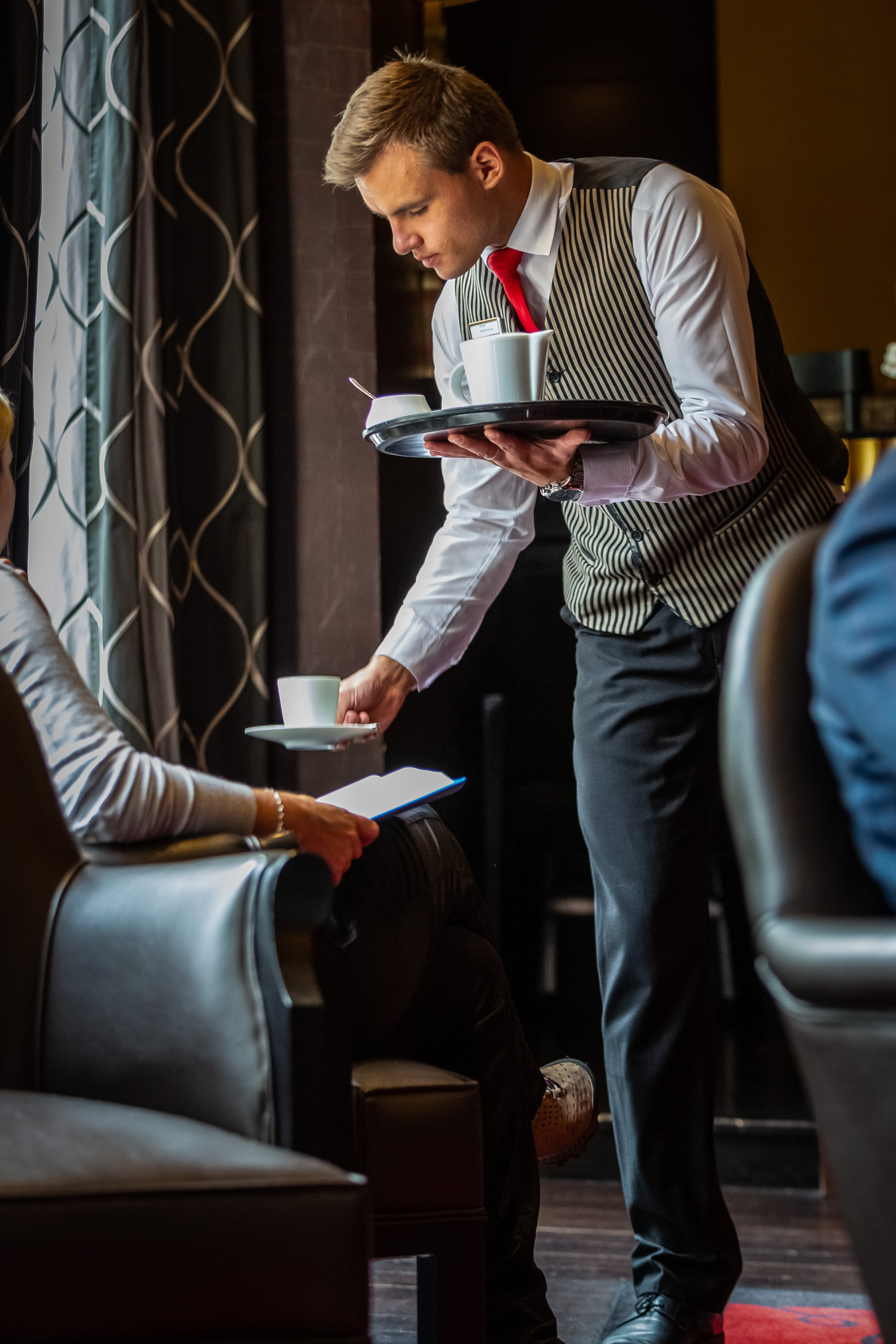 Nicolas told TFN: 'We want to bring a democratic luxury of service. It means that staff in two-star hotels are trained with the same standards as in the five-stars.'Kalbar/TFN

What is crucial in Thermaleo Group’s activities, is the desire for the highest standards when it comes to design, ecology and service, respecting Szczawnica’s tradition with unbelievable attention to detail. Nicolas, the visionary behind many of the project explains: “All this is supposed to not only affect your sense of sight, but your subconsciousness. When somebody arrives, we want to offer them thousands of experiences, that will relate to their childhood, that will relate to many different moments in their life and a variety different feelings. “

Nicolas happily explains the thought process that went with designing every little feature. From the shape of balustrades in the park, which the family owns, but keeps open and maintains, to the softness of carpets in Modrzewie Hotel and the acoustics in Dworek Gościnny, that allow it to serve as a prefect concert hall (jazzman Nigel Kennedy famously praised it) and cinema at the same time. 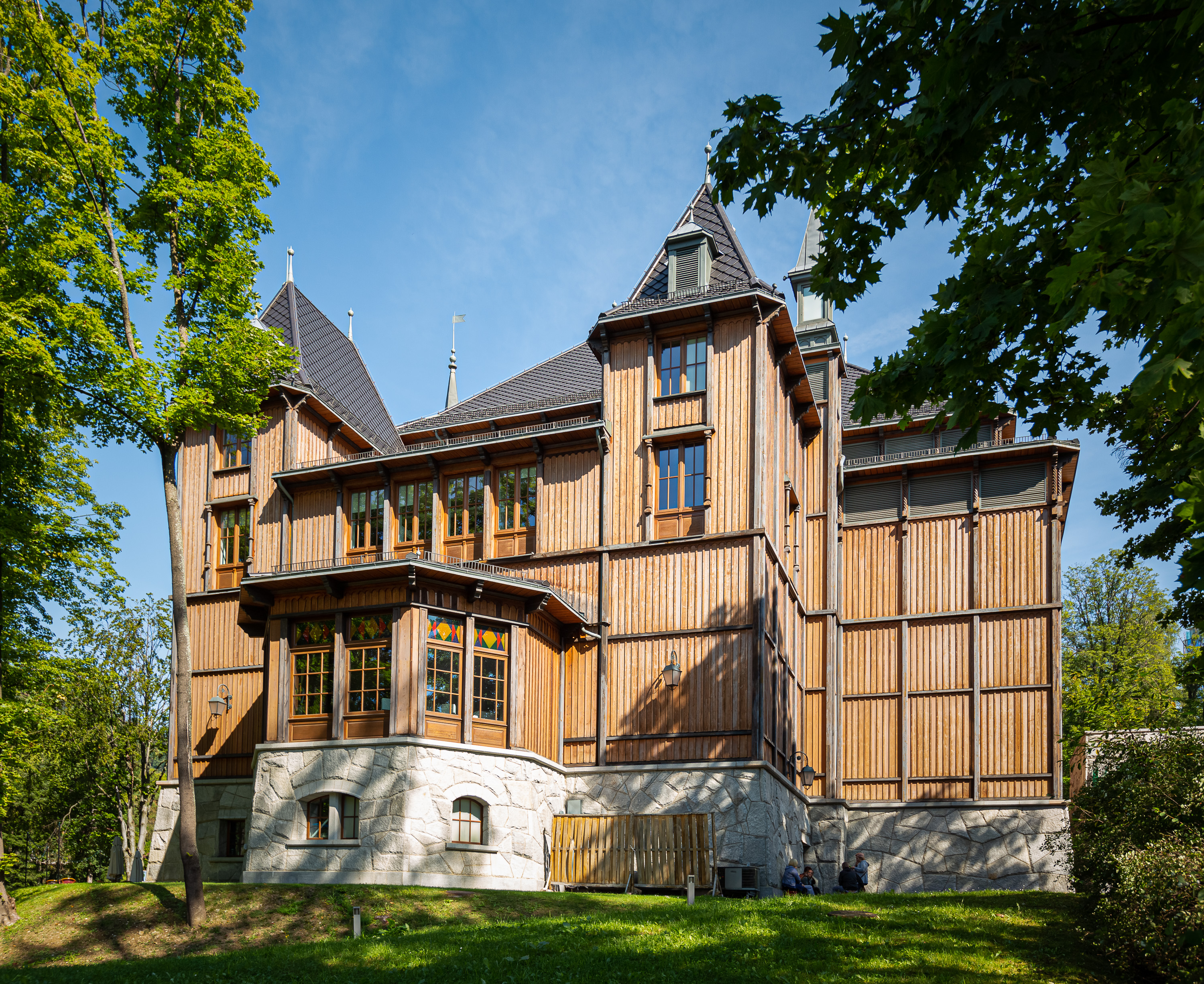 Originally opened in 1884 as a place for a ballroom, entertainment hall and cafe, Dworek Gościnny was rebuilt by looking at old postcards of the place. Now it is once again the cultural centre of Szczawnica, serving as a concert hall, theatre, cinema, jazz bar and hosting any event the guests can imagine wanting to have, from weddings to fashion shows.Kalbar/TFN

Walking around Szczawnica’s nook and crannies it’s obvious how much work still needs to be done. Various dilapidated buildings, wooden villas and communist modernist structures still mark the landscape. However, it would be a mistake to lay the responsibility on Mankowski. While they continue to purchase land and buildings, there are other investors in the town, to hope to benefit from its growing potential.

For the Thermaleo Group investment is still not paying back, while the expectations are only growing. Everyone wants to see the city fully restored to its former glory and beyond, without realising the amount of work and resources need for it. While the Mankowskis don’t lack ideas, they already have their own boutique beer and wine, every initiative requires their time and attention. Thankfully for Szczawnica, they’re here for the long haul. 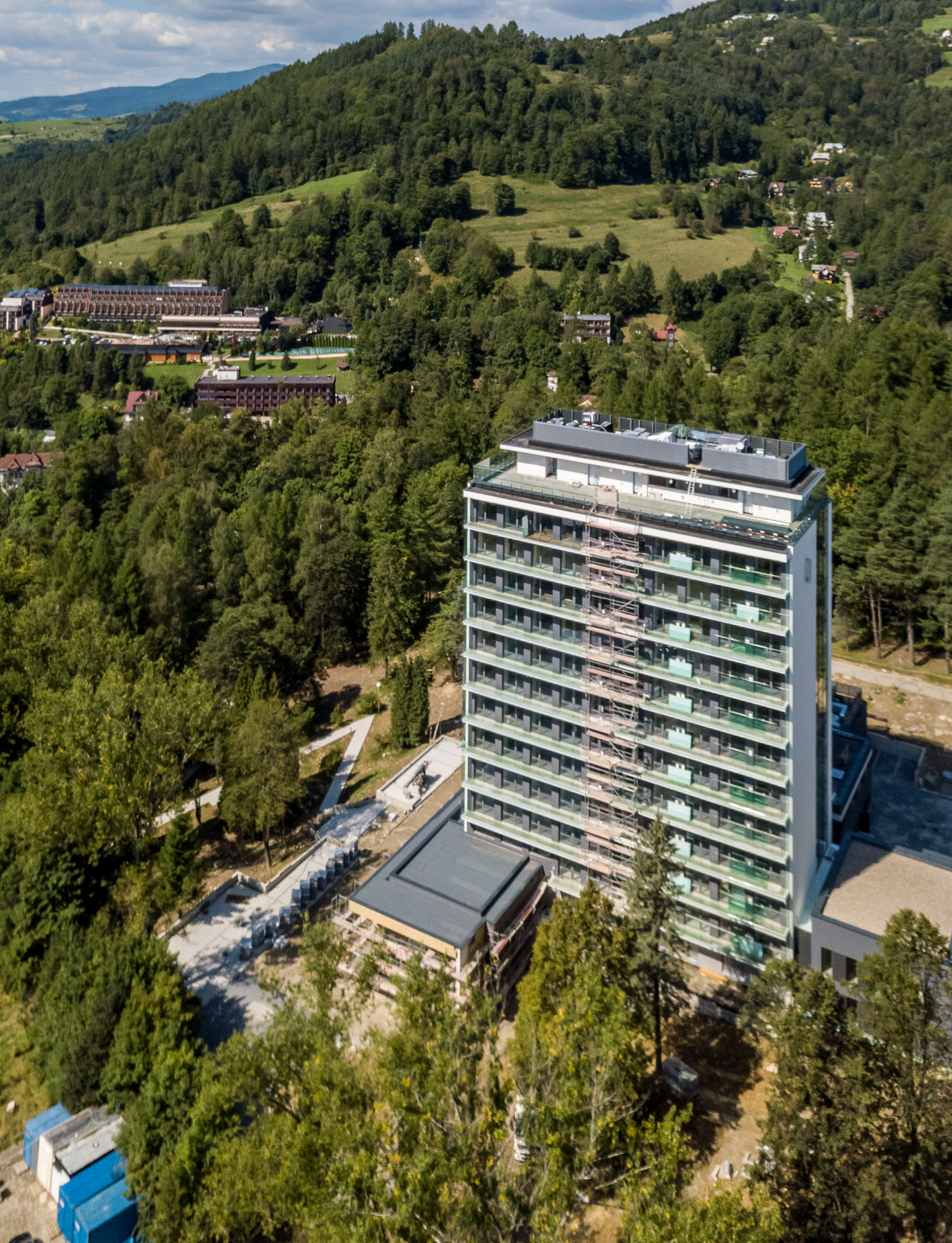 The old Hutnik hotel is now being renovated into Pieniny Grand hotel, a four-star of the highest standards with its own medical spa.Kalbar/TFN

To Helena and Nicolas, Szczawnica is now their home, in which they are familiar with every corner and they can enjoy the fruits of their work (when they have the time). “In Szczawnica everything is very close. And every building has a different atmosphere, different people, different purpose. I love to have tea here [in Modrzewie Park Hotel], I love to go for a concert in Dworek Gościnny, I love to have a homemade meal in Villa Marta and to have some dessert in café Helenka with some music on Dietla square,” Helena describes.

Their dedication and passion for this little place on Earth they can call theirs is palpable. Both light up when they talk about what comes next, the opening of hotel Pieniny Grand, the renovated Hutnik, which hides its size with reflective surfaces, but from the inside will be a mix of grandiose and welcoming, with an enormous fire place, cathedra-like swimming pool and a sky bar. The four star hotel may be closest to completion, but it’s hardly the last on the long list of projects waiting for the Mankowskis. 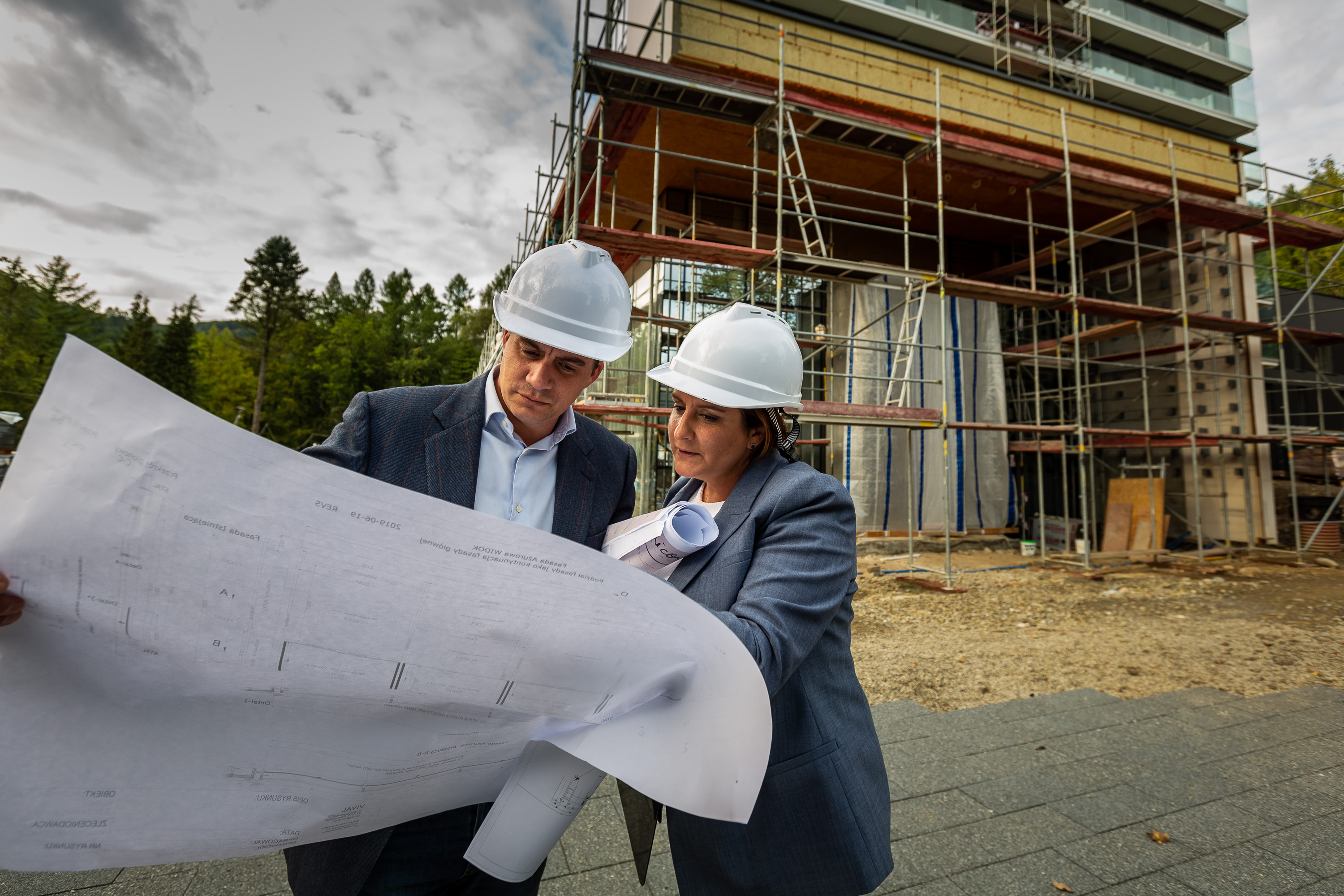 Helena and Nicolas are now working on a new 4-star hotel. Kalbar/TFN

Nicolas explains: “We want to bring a democratic luxury of service. It means that staff in two-star hotels are trained with the same standards as in the five-stars. The prices are different because it’s not the same quality of materials used in the decor, but the service is almost the same. What we want to bring our little utopia, that no matter how much money you bring, what standard of living you are expecting, we are going to give you more than that.”

“Private investors are thinking differently, this means we are here for the next 100 years and we are hoping that our children will follow,” Helena concludes.

Restored and revived, Pałac Wąsowo promises a stay to remember