The address: Wilcza. The venue: CoffeeDesk. It’s 11 a.m., Thursday, and no seats are free. Occupying them are a broad range of characters ranging from tattooed freelancers and late-starting execs, to bookworm students and whispering couples. All have coffee. Good coffee. Across Warsaw this scene, and variations thereof, is being replicated in the city’s estimated 40 or so specialty coffee dens. The capital, it appears, just can’t get enough.

“Not long back,” says Agnieszka Bukowska, CoffeeDesk’s expansion manager, “no-one really thought about their coffee – people didn’t drink to taste, they just drank it to start the day.” Things changed, she says, with the arrival of the CoffeeHeaven chain at the start of the millennium. Not only did coffee suddenly become widely available, a fresh generation of “baristas of the future” began their coffee education under the company’s banner. Simultaneously, Tomasz Obracaj entered the scene. A specialty coffee trader by profession, it was Obracaj that initiated and organized the first barista championships that Poland had seen. Thanks to him, a standard was set. “No-one else in Poland,” states Bukowska, “did more to promote the culture of quality coffee.” 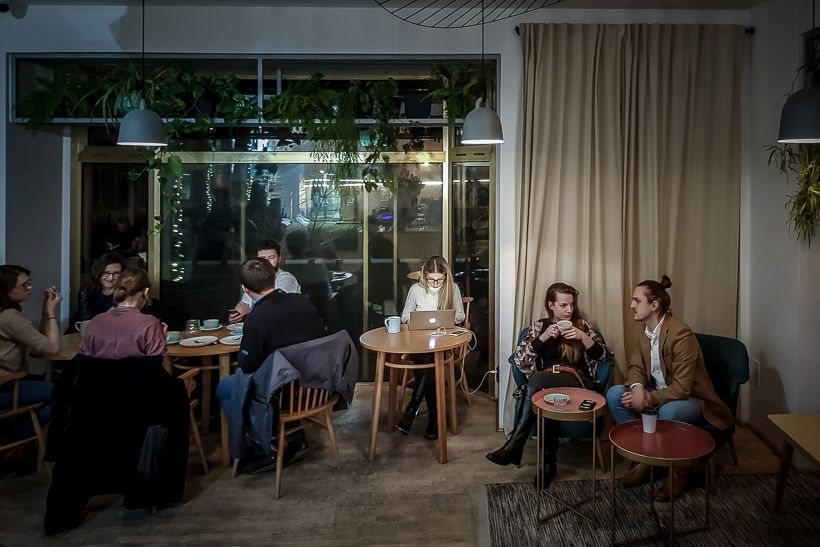 Warsaw’s CoffeeDesk: one of the pioneers of Poland’s coffee revolution.Kalbar/TFN

Domestically, says Bukowska, the scene took another leap forward in 2007 when Filtry – Poland’s first specialty coffee café – was launched, with their debut doing much to spread early seeds of interest in single origin coffee. Gradually, Poles were starting to differentiate and appreciate what constituted quality.

Bit by bit, other cafes majoring in alternative methods also began springing up, a situation that was further boosted by the 2013 establishment of CoffeeDesk (in those days, solely an online store offering all the necessary accessories essential to alternative brewing). According to Bukowska, it was a moment that lit the blue-touch paper. “Prior to that,” she says, “access to things such as Aeropress and Chemex coffeemakers and filters was limited, but with CoffeeDesk, the game changed completely.” The revolution had begun. 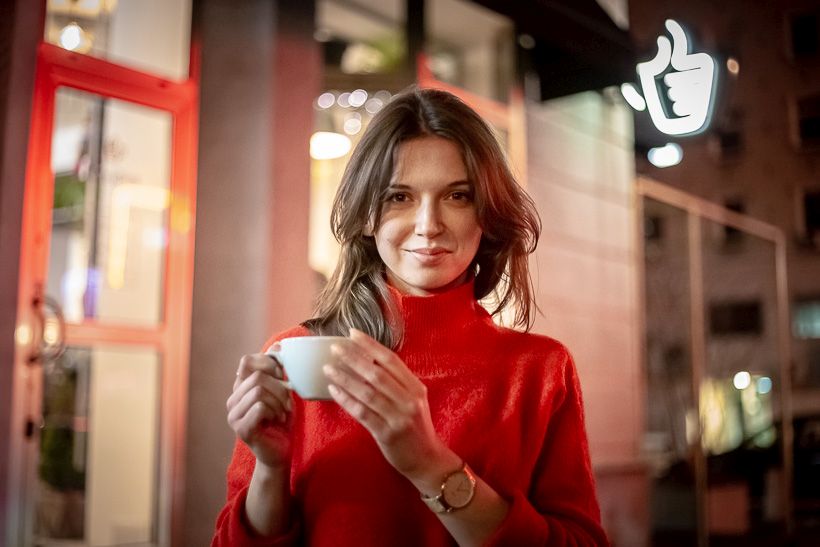 Other factors, too, came into play. “Poles started returning from places like the UK,” says Uri Wollner, owner of Cophi, an outrageously popular café in downtown Warsaw. “They brought with them knowledge, which combined with the accessibility of loans here helped nurture the scene further and led to the birth of more and more specialty cafes.” As if in tandem, the public’s appetite for specialty coffee has continued to create demand. “The age of coffee drinkers has lowered to the point where we get high school students visiting CoffeeDesk,” says Bukowska, “and whilst coffee culture is still young in Poland, it’s amazing to see that ‘going for a coffee’ is now an accepted byword for meeting with friends and having a chat.”

“Coffee is no longer just seen as a fix,” says Wollner, “it’s become something special – to some, even a fashion item.” Snobbery, however, is firmly becoming a thing of yesteryear, at least where baristas are concerned. “They’re not so pushy anymore,” says Bukowska, “in much the same way you get so-called ‘grammar Nazis’, for a time the coffee industry was hijacked by ‘coffee terrorists’. That’s changing though, the amount of competition means owners and baristas just can’t behave like that anymore.” It’s a point that Wollner agrees with. “I’ve always thought of cafes as unofficial parliaments – they’re places in which people from different sectors of society can gather. As the proud owner of a pair of Crocs, I don’t mind what you wear in my café. Likewise, I don’t mind if you want syrup in your coffee. It’s not my job to choose or criticize what you want, what I will do though is gently suggest that the next time you visit you try something a little different.” 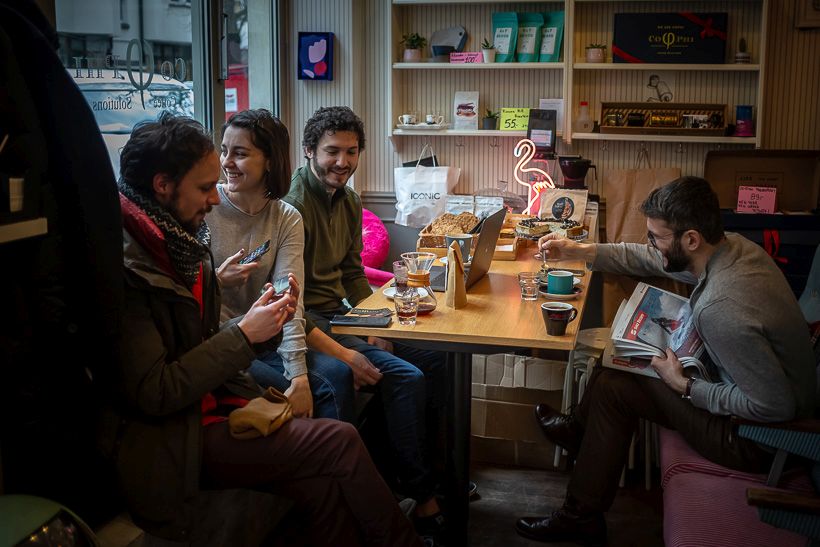 Specialty coffee has continued to create demand, appealing to all ages and backgrounds.Kalbar/TFN

Not just restricted to baristas spreading their wings to open their own operations, an increasing number of people are leaving their first calling behind to enter the specialty coffee sector. Bukowska, for instance, traded in a high-flying job with Saatchi & Saatchi, while Wollner, on the other hand, began his coffee adventure while studying at Warsaw’s med school. Their career turns are by no means unique. Across town, Armand Ziemiński jacked in a life in advertising to open Kawiarnia Kawałek. “I was tired of it all,” he says matter-of-factly. “I needed the change.” Celebrated for pouring the capital’s only year-round nitro coffee from a machine of his own design (“I just like making things,” he laughs), Ziemiński smiles at the memory of culling his computer of his work presentations: “Thousands of slides deleted, what an amazing feeling!”

But while some make it look easy, the reality of running a specialty café is not without its challenges. “Margins are tight,” warns Bukowska, “and creating a proper business plan is something that people can overlook.” Lacking the financial backbone of the chain giants, specialty cafes afford their owners little room for error. “You need to love what you do,” says Ziemiński, “but that passion needs to be supported by rational decisions.” Before signing his lease, Ziemiński remembers standing outside his prospective unit personally counting the number of pedestrians that walked past each day. His due diligence has reaped dividends. “I’ve never worked so hard in my life,” he continues, “for the first few months I was here twelve hours a day, seven days a week, but everything’s been counted and today my figures match my calculations and forecasts.” 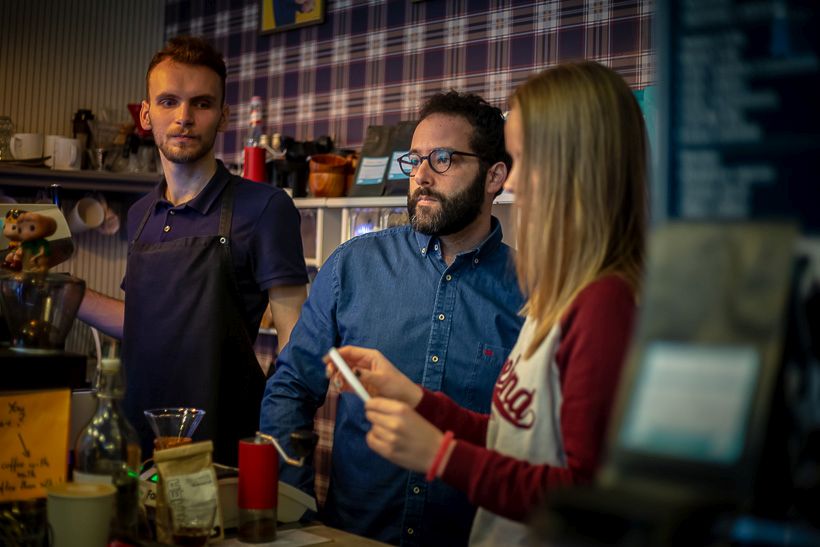 “Coffee is no longer just seen as a fix,” says Cophi’s Wollner, “it’s become something special – to some, even a fashion item.”Kalbar/TFN

Undoubtedly, it’s Warsaw that’s forged the path in terms of Poland’s specialty coffee boom; the capital, however, is not the only city riding the crest of a wave. Better positioned than most to comment on this is Agnieszka Bukowska, who together with Krzysiek Ryzman co-authored ‘Coffee Spots Polska’, an acclaimed guidebook featuring the cream of Poland’s cafes.

“Whenever my friends were heading to Kraków or wherever,” she says, “they’d always ask me beforehand where they should go for a good cup of coffee. By the end, I had accumulated a list of places that I’d just simply cut and paste.” Ryzman, a journalist and the co-owner of Stor café, had already successfully published a coffee bible highlighting Warsaw’s café haunts, and together the two joined forces to take the next logical step and cover Poland as a whole. What they saw, took them by surprise.

“We thought it’d be easy,” laughs Bukowska, “but instead of the fifty or so places we had anticipated we discovered something like 180.” Visiting thirty-three towns and cities over a period of three months, the revelations quickly mounted. “We never expected to find a brilliant place in Racibórz, but in the shape of Migawka that’s exactly what we got – just imagine finding a place that would do well in Brooklyn in the middle of darkest Silesia!” 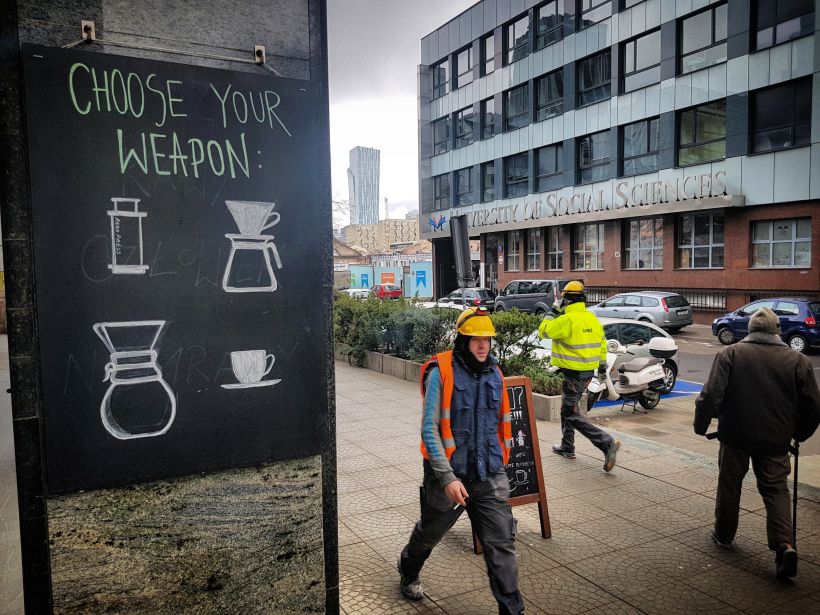 Coffee has now replaced tea as the country’s hot drink of choice.Kalbar/TFN

The speed with which specialty coffee has spread across Poland is perfectly encapsulated by Owoce i Warzywa, an ultra-cool hangout in the centre of Łódź. “When we opened in 2010 there wasn’t a coffee scene to speak of in the city,” says Mateusz Nowak. “The coffee shops that the public perceived as the best sold big, corporate products such as Illy or Lavazza, and in all truth, we didn’t really know much more about coffee than anyone else – the original idea was basically for an easy going bar with cultural events…”

Set inside a former grocery store on a trendy woonerf, it wasn’t long before Owoce’s management noted the demand for specialty coffee. “Now we’ve got a lot of specialty coffee drinkers in the city,” emphasizes Nowak. “People are curious and not afraid of experimenting in general. A few years back we were struggling to sell a few drip coffees a week and we used non-specialty coffee for milk beverages. Today though, we’re a 100 percent specialty coffee shop with 20 percent of sales coming from alternative methods: that’s better than the European average!”

It’s a salient point. The scope of Poland’s coffee revolution has been staggering, even more so when bench-marked against other European cities with a more entrenched coffee culture. “Visit Paris,” says Bukowska, “and you’re only going to find 10 or 15 specialty cafes. The choice we have in Poland is really quite something.” 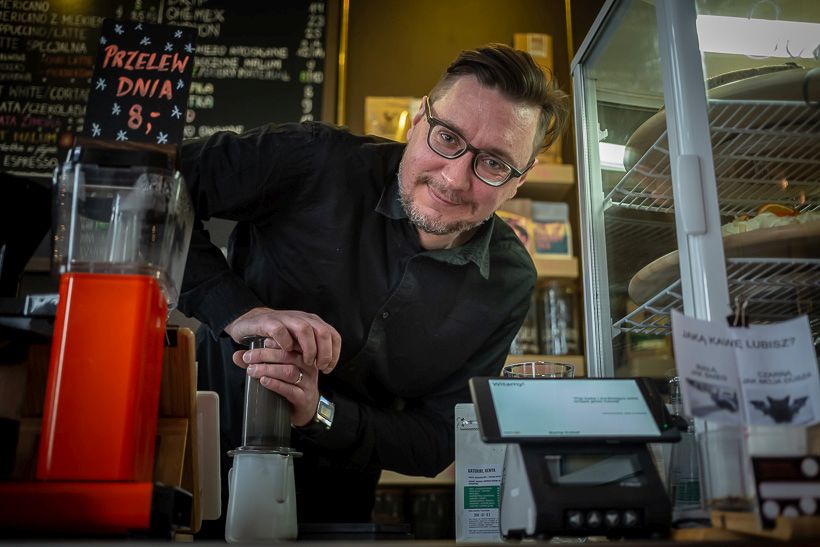 Armand Ziemiński jacked in a life in advertising to open Kawiarnia Kawałek.Kalbar/TFN

Equally impressive has been the drive for perfection. “There’s something about this generation of Poles that wants to prove they’re No. 1,” says Uri Wollner, “they don’t just want to be good, they want to be the best.” More than hot air, it’s a point based on fact. “Poland’s a relative newcomer to specialty coffee,” says Mateusz Nowak, “but in Agnieszka Rojewska we’ve got the reigning World Barista Champion, and in Wojtek Bialczak we have Germany’s new Barista Champion. Furthermore, you’re pretty much guaranteed to find at least one guy from Poland in Berlin’s best cafes. The scene is continuing to grow rapidly, and that’s thanks to ambitious baristas and café owners looking to get competitive and embrace the latest trends and innovations whilst educating and inspiring their customers – sometimes, you get the idea Polish coffee drinkers are more conscious and aware of what they’re drinking than their counterparts in Europe’s other big cities.”

Whether Poland’s specialty segment will hit saturation point only time will tell, and Nowak himself cautions that customer volume is an issue that needs addressing. Nevertheless, the fundamental message rings loud and clear: never before have drinkers had it this good.