The death of Britain’s longest serving monarch has sent shock waves around the world.

In Poland, the country’s president Andrzej Duda said: “My deepest condolences to the Royal Family and all the British people on passing of Her Majesty The Queen.

”For decades she has been an embodiment of everything that makes Britain truly Great. She will be missed and remembered in Poland and all over the world.”

Poland's Ministry of Foreign Affairs also tweeted on Thursday that it had learnt of UK head of state Queen Elizabeth's II's death with great sadness.

"It was with great sadness that we received news of the passing of Her Majesty Queen Elizabeth II.

“We join in grief with members of the British Royal Family, the British nation and people the world over. Requiescat in pace.”

Queen Elizabeth II met several Polish leaders during her 70-year reign, but her first and only visit to Poland in March 1996 stands out as a special memory for the legions of Poles who lined the streets to catch a glimpse of her.

The three-day trip was a reciprocal visit after President Lech Wałęsa made a state visit to the United Kingdom in 1991.

Arriving in Warsaw at Okęcie at 2 p.m. accompanied by her husband Prince Philip the Duke of Edinburgh, she headed straight to the Presidential Palace on Krakowskie Przedmieście, where President Aleksander Kwaśniewski and his wife were waiting.

The Queen reviewed the guard with President Kawśniewski and then went inside the talk with the President and First Lady. 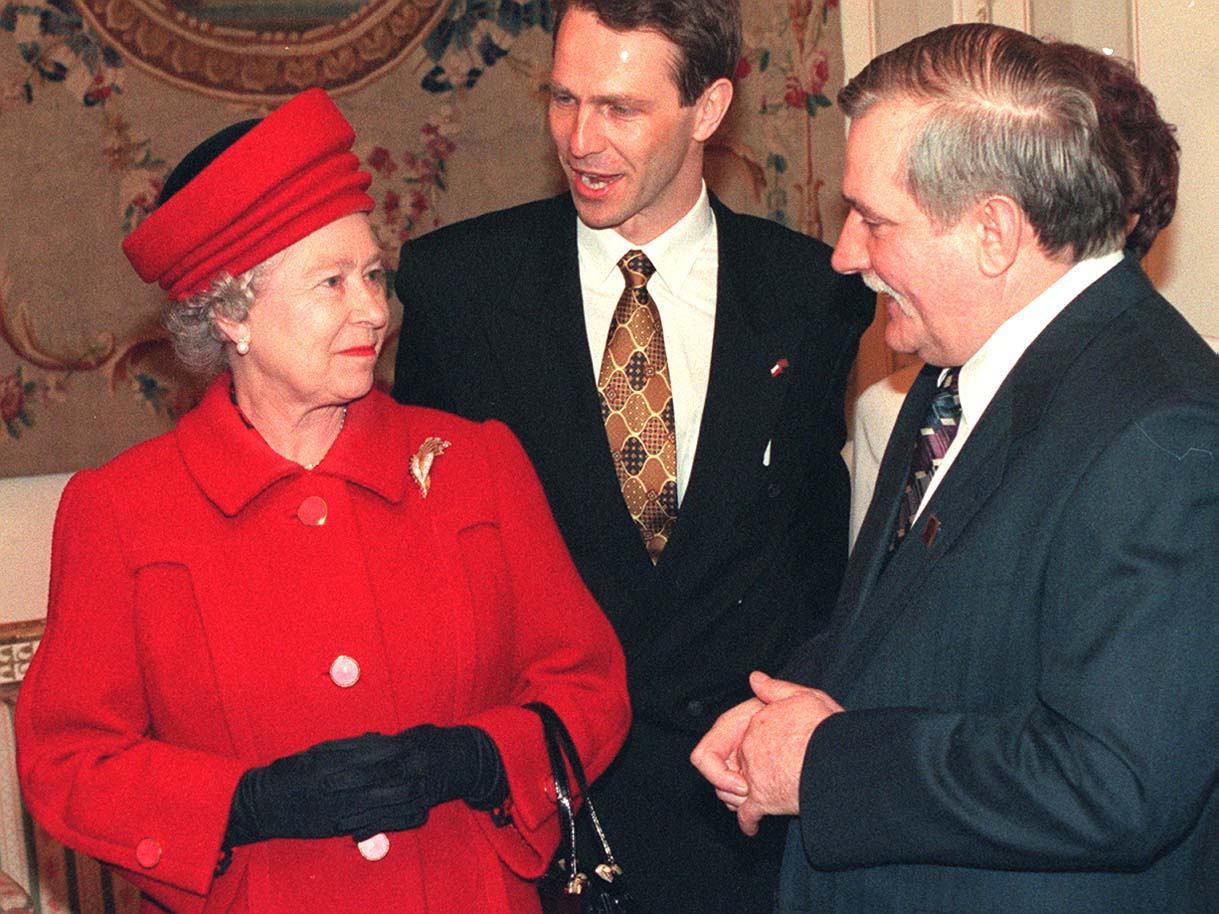 According to Kwaśniewski, the Queen displayed impressive professionalism.

Protocol states that after the playing of the anthem when passing in front of the soldiers, those doing the reviewing stop and say ‘czołem żolnierze’.

The Queen was holding her gloves and her handbag, inside which she had a piece of paper hidden with a transcription of the Polish greeting written on it and managed to produce the Polish tongue-twister without error.

President Kwaśniewski, who was the official host during the visit, said later: “She is a wonderful person, an outstanding personality. A great wit. She has an excellent grasp of politics, which she learned from Winston Churchill."

The royal couple’s motorcade then snaked through Warsaw to visit Umschlagplatz, the departure point from which over 300,000 Jews from the ghetto were transported to the Nazi German death camp Treblinka. There, she laid a wreath for the victims of the Holocaust. 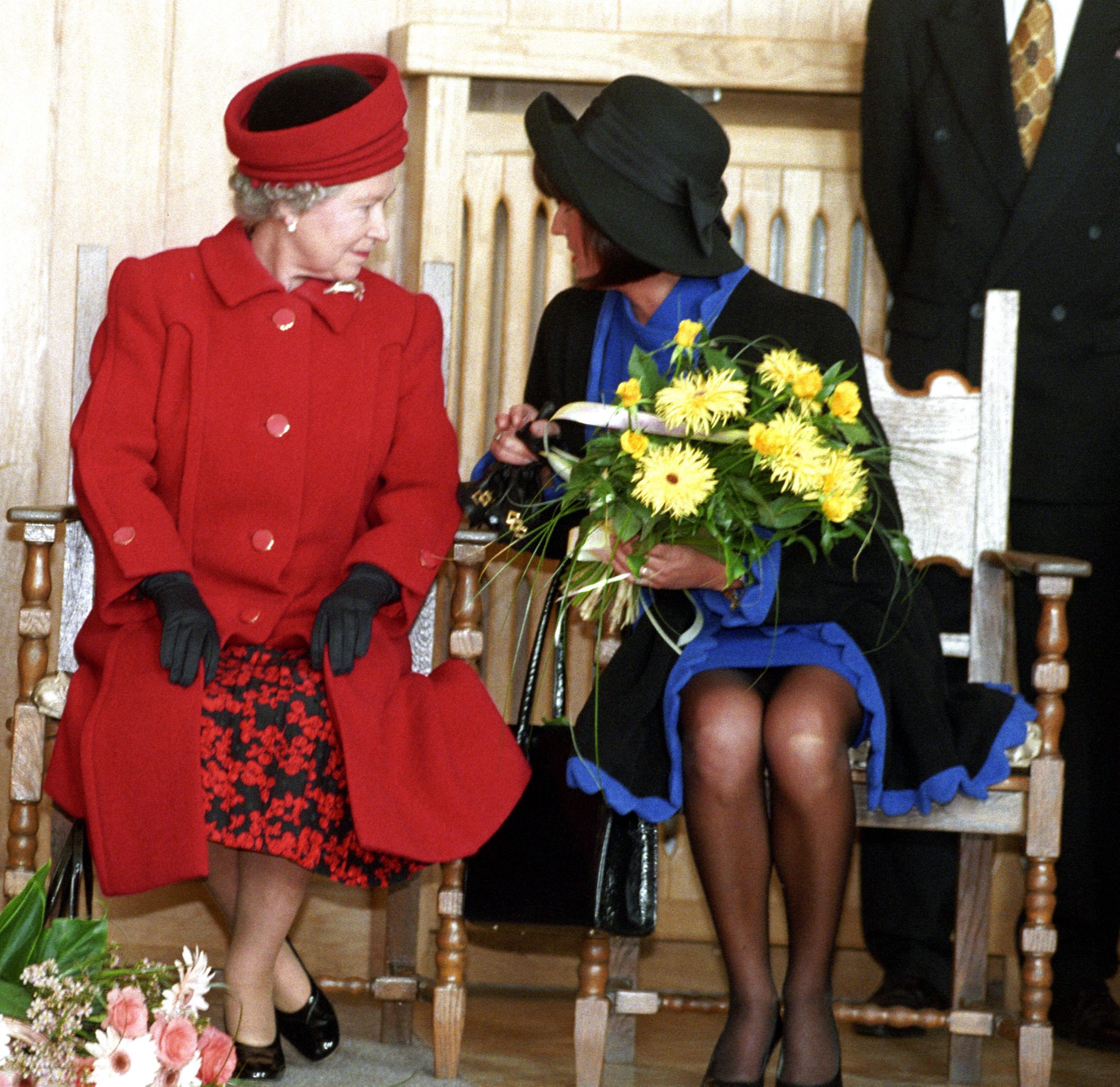 She also laid flowers at the Tomb of the Unknown Soldier and while in Saxon Garden even found time to plant an oak commemorating the 400th anniversary of Warsaw being Poland’s capital.

During her visit, the Queen took part in a string of engagements, including a speech to the Polish Parliament, which was the first time in Poland’s history that a session of parliament had been broadcast over the Internet.

The royal couple visited the monument in Skaryszewski Park commemorating at the site where an RAF Liberator crashed in 1944 during a mission to drop supplies for the Home Army during the Warsaw Uprising.

In the Old Town, the Queen opened an exhibition at the Royal Castle named The Eagle and the Lion - 900 years of Polish-British Relations, during which she asked many questions about the castle.

Prince Charles had previously visited the castle and according to the then director Andrzej Rottermund was deeply interested in the castle’s rebuilding in the wake of the fire at Windsor Castle in 1992. 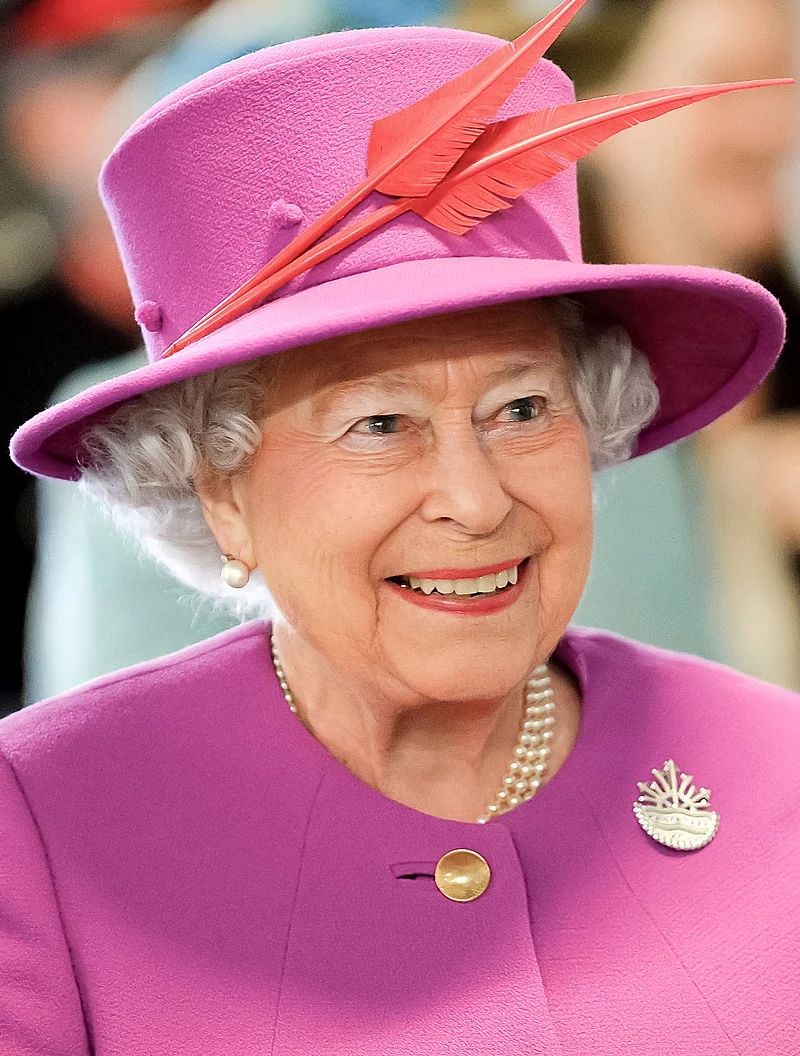 Another engagement was a visit to the famous Stefan Batory high for a meeting with pupils.

British embassy officials had turned up early to warn people not to ask about mad cow disease, the Falklands war, Prince Charles' divorce from Diana and other family problems.

They suggested that it was best to talk about horses, dogs, the weather and her wellbeing.

In the evening, the Queen and the Duke were guests of honour at a State Banquet at the Presidential Palace. 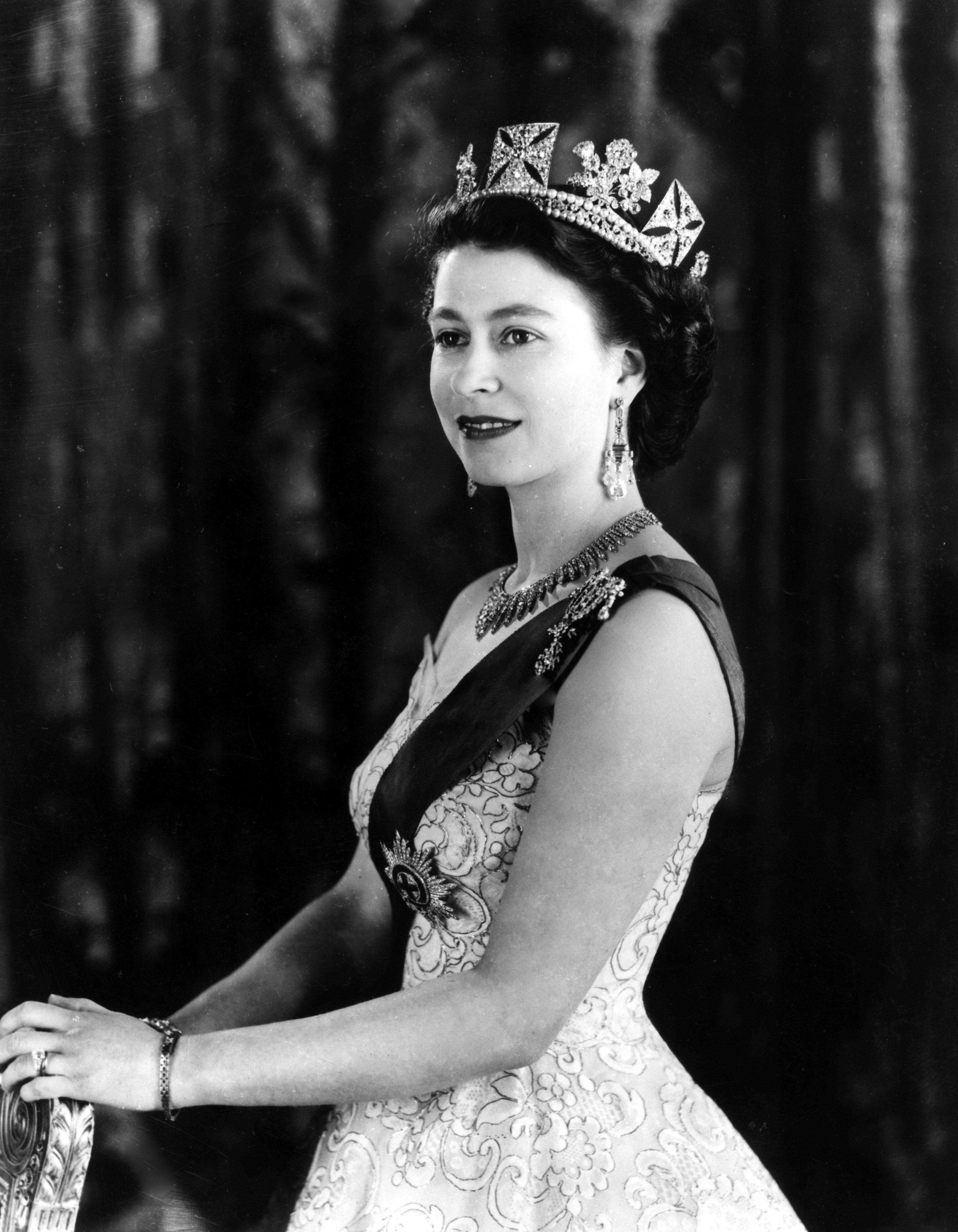 Protocol during the carefully planned dinner was broken only once when the Duke wished to be served a Polish beer.

The Duke’s antics continued on the last day of the visit in Kraków. At one moment on the market square, the Queen noticed his absence and exclaimed “Where’s Philip?”

Earlier in Kazimierz, the Duke had been tempted into trying a glass of śliwowica, and then wandered off away from the main tour.

In the evening of the first day of the visit in Warsaw, the Queen and the Duke saw a Gala Performance of ‘La Fille Mal Garde’ at the National Theatre in Warsaw.

On the next day, the pair spent four hours in Krakow. The royal city welcomed Queen Elisabeth with an unusually warm atmosphere despite the snow and rain. 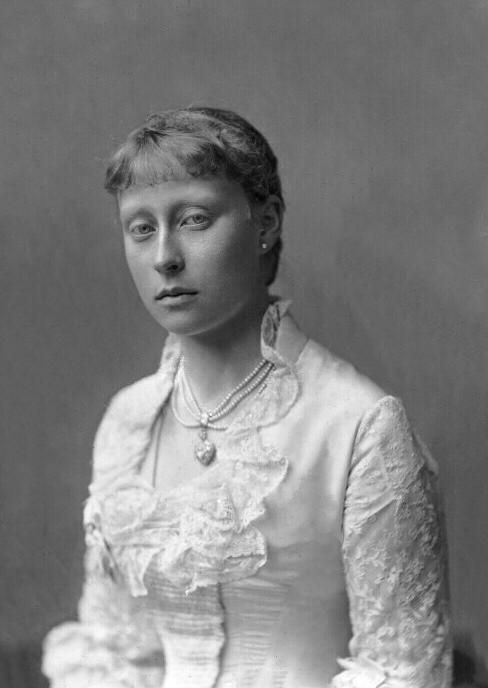 The marriage of Queen Victoria’s granddaughter Princess Victoria of Hesse (pictured) to her cousin Prince Louis of Battenberg that provides the lineage to Prince Philip. Public domain

From the airport, the queen travelled in a Rolls-Royce, assisted by police officers on motorbikes, to Wawel Castle, in whose courtyard a long red pavement was rolled out for the occasion. The Queen was received in the Throne Room.

Elizabeth II and the Duke of Edinburgh then flew to the Czech Republic.

The visit was not the only time Queen Elizabeth met with well-known Poles. She met Pope John Paul II several times. Their first meeting took place in 1980. Another took place two years later, and the last in 2000. 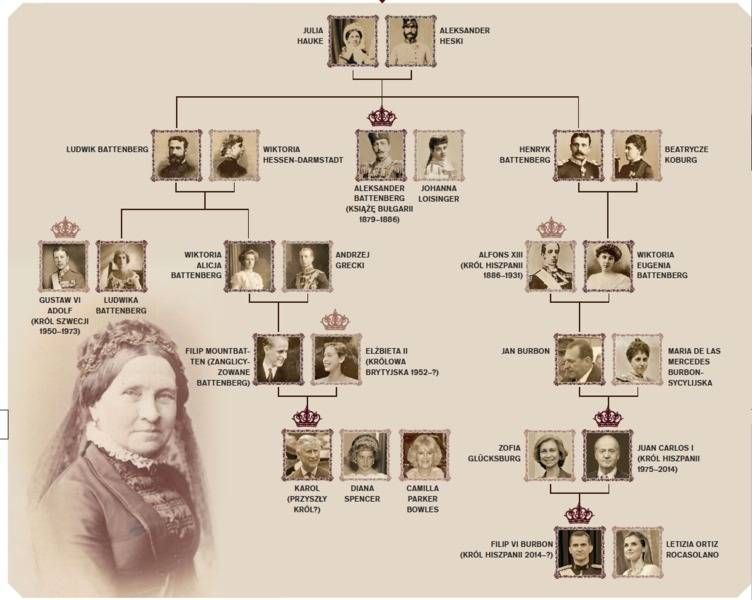 Descendants of Polish Countess Julia Hauke on the throne of England.Public domain

In 1991, Lech Wałęsa and his wife Danuta were guests at Buckingham Palace. The former Polish President had the opportunity to ride in a royal carriage with the Queen, a rare privilege not afforded to many other guests.

Lech and Maria Kaczyński had a private audience with Queen Elisabeth while visiting in London in 2006.

Asked about his meeting, President Kaczyński said that it was a very friendly conversation and they talked about events related to Polish history and Poland's involvement in peacekeeping operations around the world.

The last meeting between the Queen and a Polish leader was in 2019 when President Duda and his wife Agata Kornhauser-Duda met the monarch while they were in London for a meeting of NATO leaders.

Polish president says he is ready to build iron curtain, if need be