Bursting with vibrant colour and personality, a Brazilian artist has reimagined some of the classic stamps of Poland using his own unique style and vision.

Something of a love letter to Poland – a country that he leaves on Sunday – the collection concludes the artist’s residence at the Vistula University. 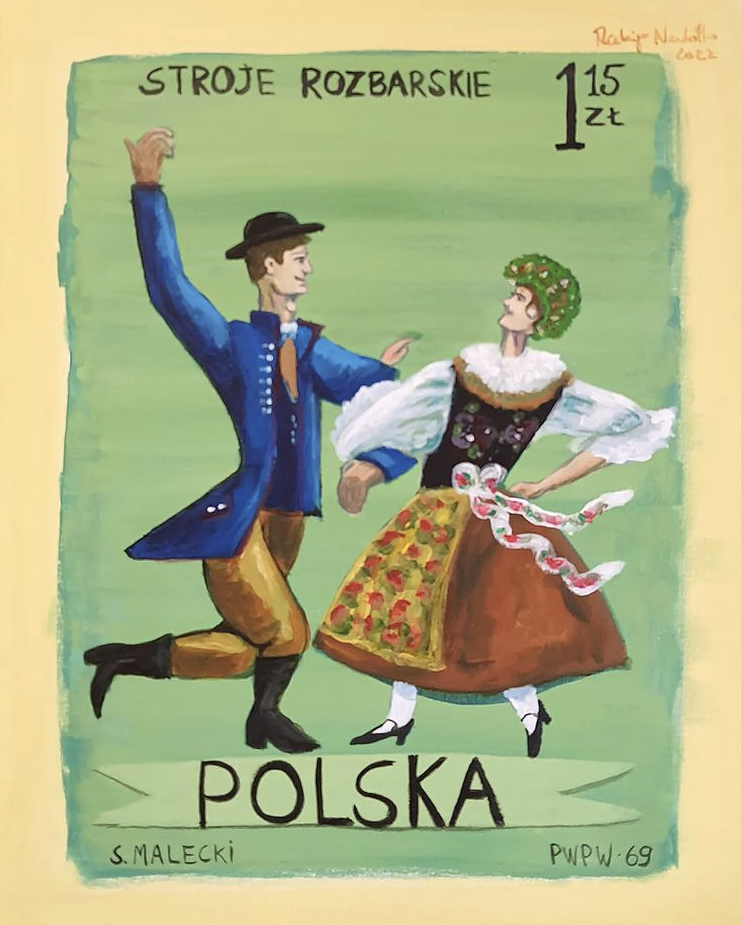 Representing a portal into a different world, Nardotto’s paintings beam with big pops of colour that seemingly amplify the richness of life.  Rodrigo Nardotto

Speaking to TFN, Nardotto said: “It’s been a wonderful time here, and aside from providing me with a huge studio and great support from the directors, the university allowed me 200% artistic freedom.”

For Nardotto, this liberty allowed him to explore his fascination with the stamps of Poland.

“I’ve got a very close friend who showed me the stamps belonging to his grandmother,” he says. “I was so intrigued by them that my friend suggested I paint them in my own way – it’s amazing how brilliant things can come from such simple suggestions.” 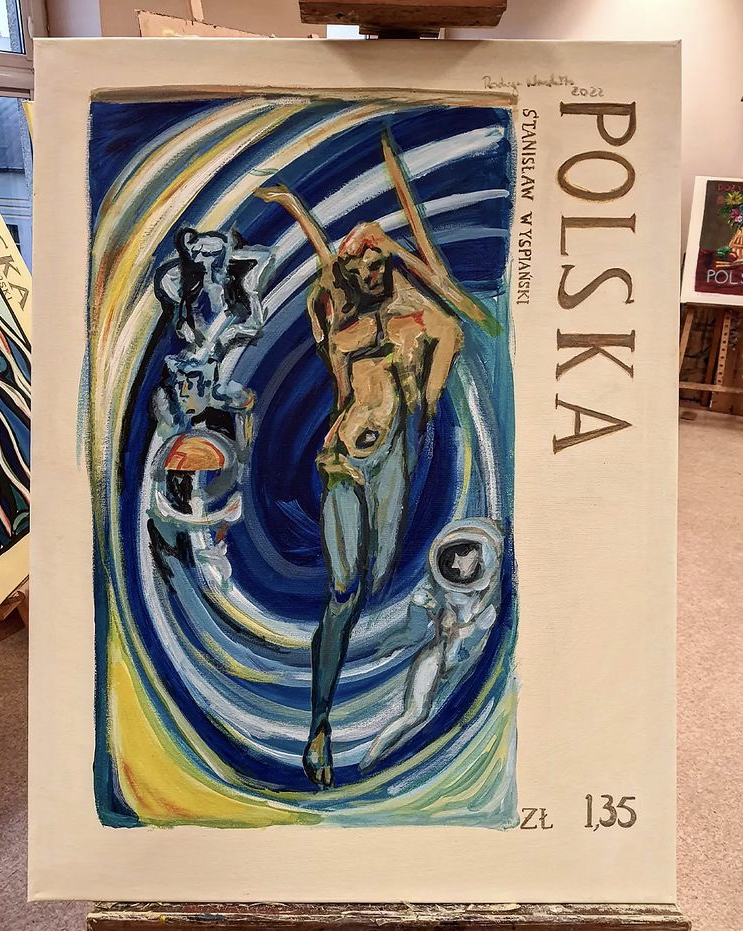 Nardotto said he was inspired after seeing the stamp collection of his friend’s Grandmother.Rodrigo Nardotto

In total, 25 were painted, with Nardotto placing a strong individual twist on each. “If I’d simply painted copies it wouldn’t have felt natural,” he says, “so instead I chose to reinterpret them in a way that was 70% faithful to the originals and then 30% in my style.”

Doing so, he continues, meant conducting internal dialogues with these Polish greats. “What can I say, they were a pleasure to have imaginary conversations with!”

Although previously exhibited at the Vistula University, Nardotto deemed this project unsuitable for a gallery-style presentation. “I don’t think the atmosphere and mood would have felt right,” he says. 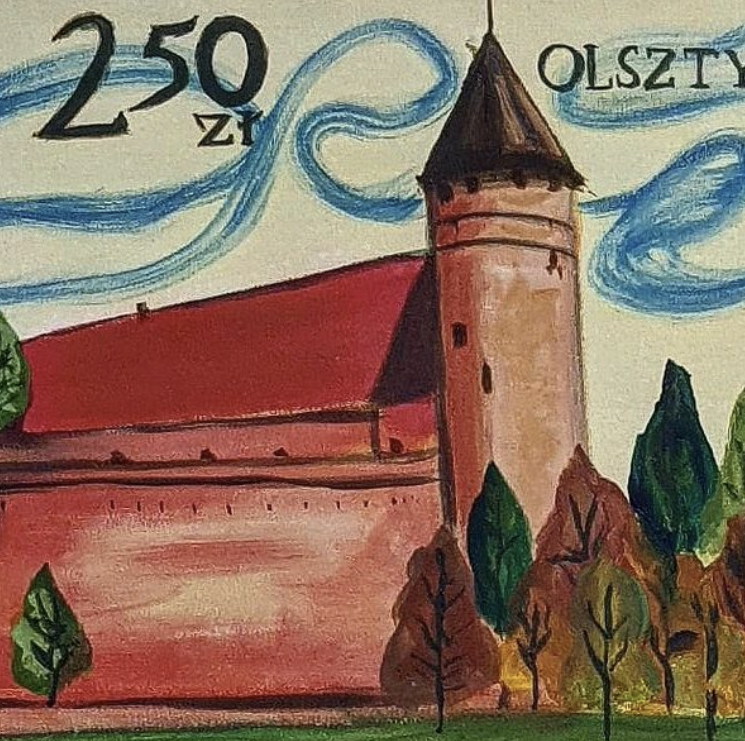 Something of a love letter to Poland – a country that he leaves on Sunday – the collection concludes the artist’s residence at the Vistula University.  Rodrigo Nardotto

Instead, visitors were encouraged to view the works in a more informal setting inside his studio, something that Nardotto says worked perfectly. “The feedback was just brilliant,” he says.

From a personal point of view, Nardotto says that the opportunity to supersize the stamps was likewise a pleasure for himself.

“We’re all connected to the internet nowadays, but we’ve got to remember how powerful a stamp can be,” he says. “As a child I used to collect stamps myself and saw them as a window into different, foreign worlds – and that was when they were thumb-sized. To be able to paint them in a larger, canvas-sized format I was able to realize just what a strong impact a stamp can truly have.” 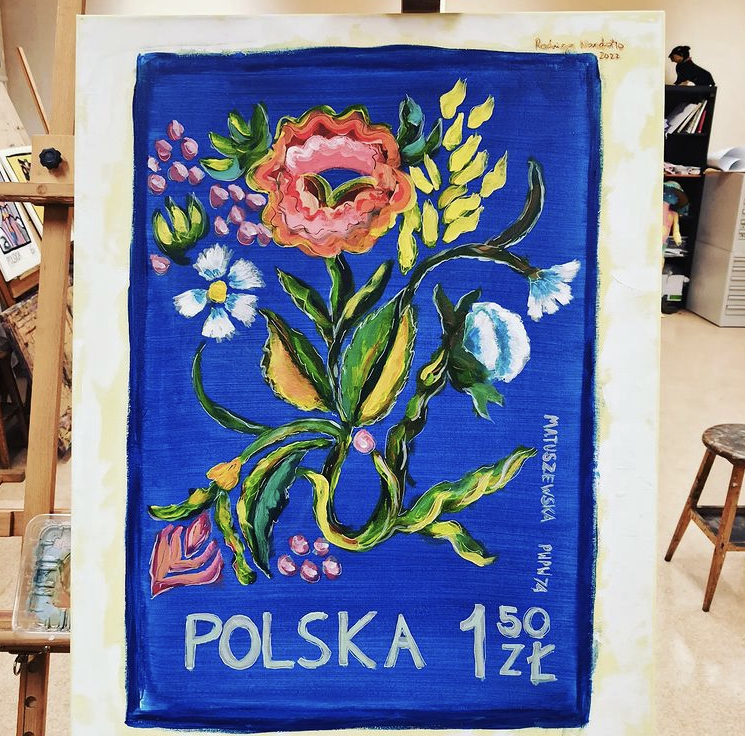 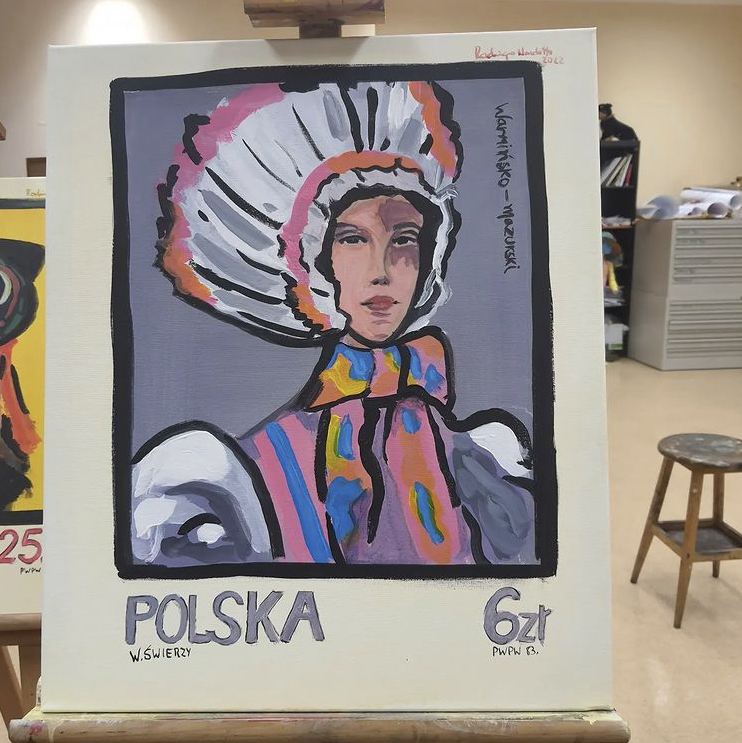 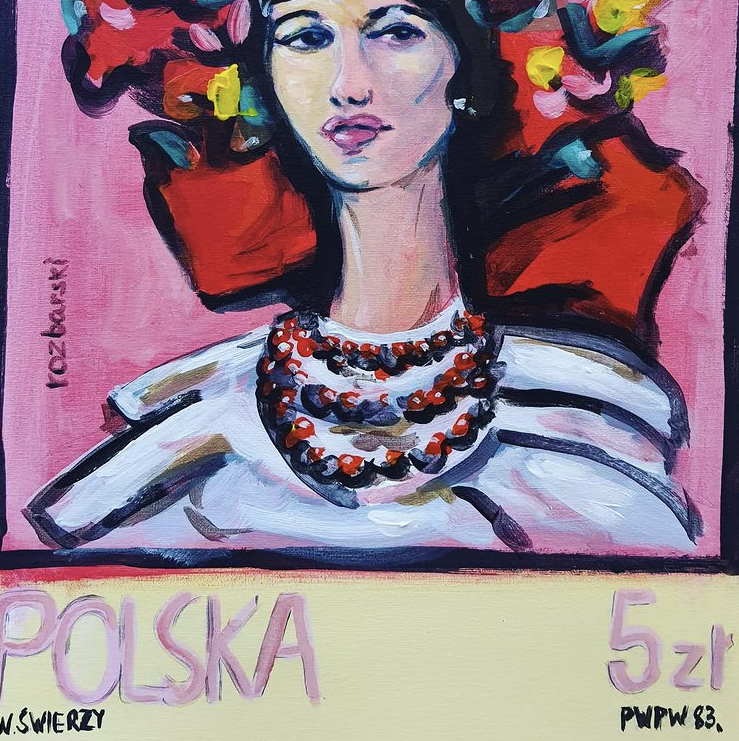 Confessing that “Warsaw stole his heart”, his recent residency has made a lasting impact on Nardotto as well as kept him fed with artistic inspirationRodrigo Nardotto

Representing a portal into a different world, Nardotto’s paintings beam with big pops of colour that seemingly amplify the richness of life. In many respects, it is reflective of his fundamental artistic philosophy.

“Colour is what really interests me,” he says. “I can bring shape through colour. For me, the lines are secondary and the stroke and the drawing only mark me. The distortions I make are intentional because my style is expressionism; that is, I express my emotions. I do not do anything that is rational.”

Not without their own secret hidden details, one stamp, says Nardotto, saw him sub-consciously paint his girlfriend’s face. 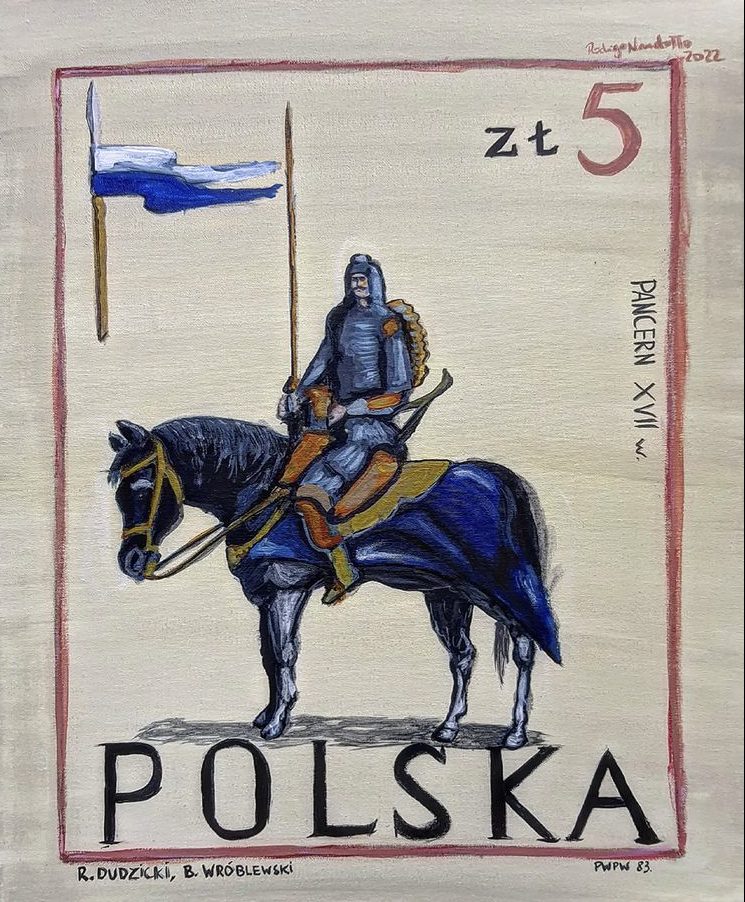 Nardotto said he chose to reinterpret the designs ‘in a way that was 70% faithful to the originals and then 30% in my style.’Rodrigo Nardotto

Born in his country’s capital, Brasilia, Nardotto’s Polish adventure has been more than just a fleeting foray however, rather the product of a complex, long-term relationship with the nation.

“We have a huge Polish community in Brazil, in fact it’s reputedly the biggest colony of Poles to be found outside of Poland itself,” he says.

Having met Poland’s then-serving ambassador to Brazil at an art fair in 2014, the pair forged a friendship that saw Nardotto often visiting the embassy to discuss art over sips of vodka. “Whenever the ambassador held a reception,” he continues, “I’d often be invited along to display my paintings.” 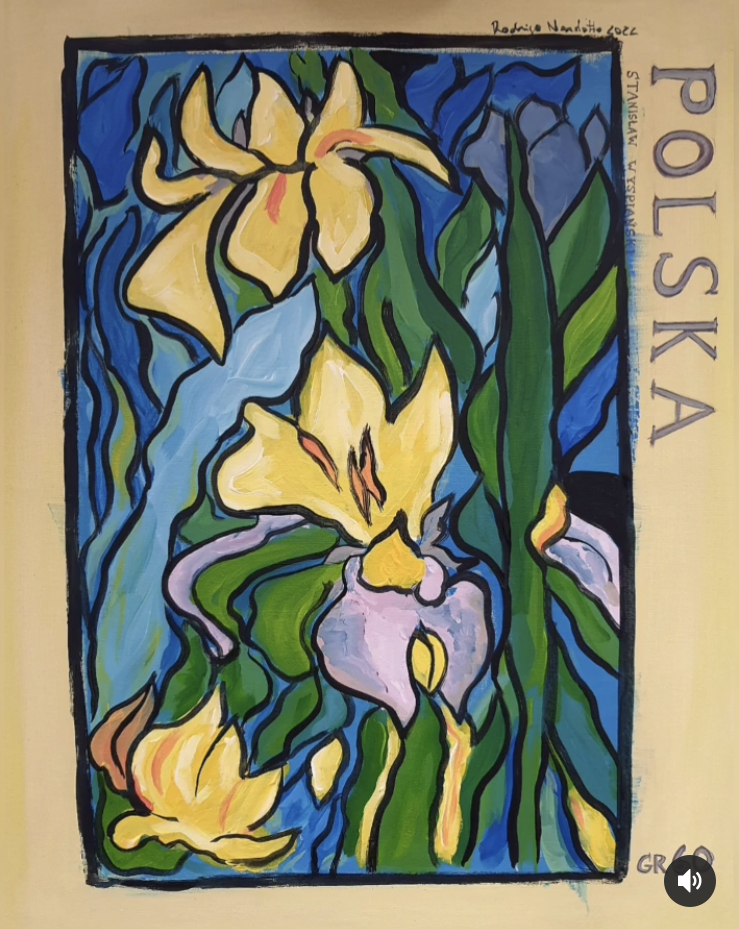 Not without their own secret hidden details, one stamp, says Nardotto, saw him sub-consciously paint his girlfriend’s face.Rodrigo Nardotto

The connection did not end when the ambassador departed, and it was with his help that Nardotto was able to organize a Warsaw exhibition in 2018.

Confessing that “Warsaw stole his heart”, his recent residency has made a lasting impact on Nardotto as well as kept him fed with artistic inspiration.

“I’ve made so many new friends here,” he says, “but I also love Poland in an artistic sense as well. The visual arts are so strong here, whether they be expressed via cinema, design, graphic art or the country’s unbelievable posters.” 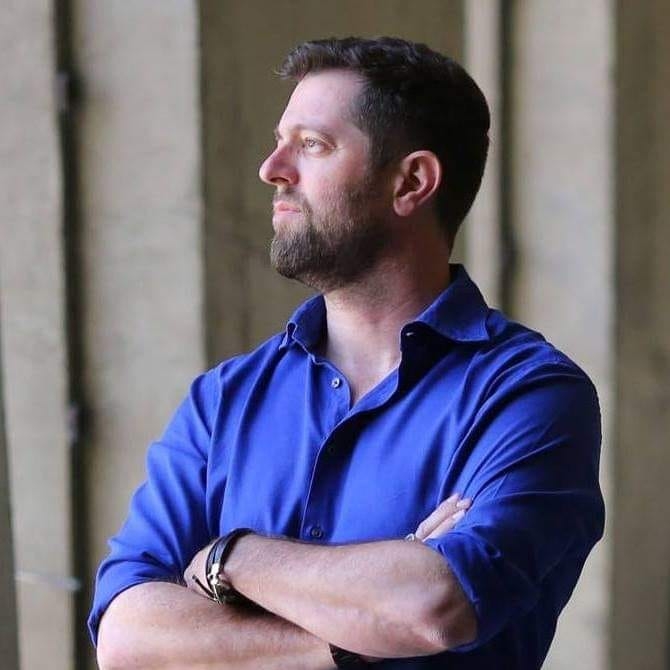 A huge devotee of Polish impressionism and modernism, Nardotto says he is ‘synchronized with Polish art.’  Rodrigo Nardotto

Also a huge devotee of Polish impressionism and modernism, it is a country that has resonated with his artistic soul. “I like to think that I’m synchronized with Polish art,” he concludes.

Yet whilst he’s set to leave this weekend, his tender homage to the country suggests that the love affair will continue for many years to come.