Researchers investigating a mass WWII execution site have uncovered bullets and the charred remains of human bones where German death squads gunned down thousands of innocent victims before setting their corpses on fire.

The harrowing discovery at a location dubbed ‘Death Valley’ was made on the outskirts of the town of Chojnice in northern Poland, where at least two mass killings took place at the hands of German death squads in 1939 and early 1945.

Dr. Dawid Kobialka, from the Institute of Archaeology and Ethnology of the Polish Academy of Sciences who made the gruesome discovery told TFN: “The bones and the bullets are related to the massacre from the second half of January 1945. 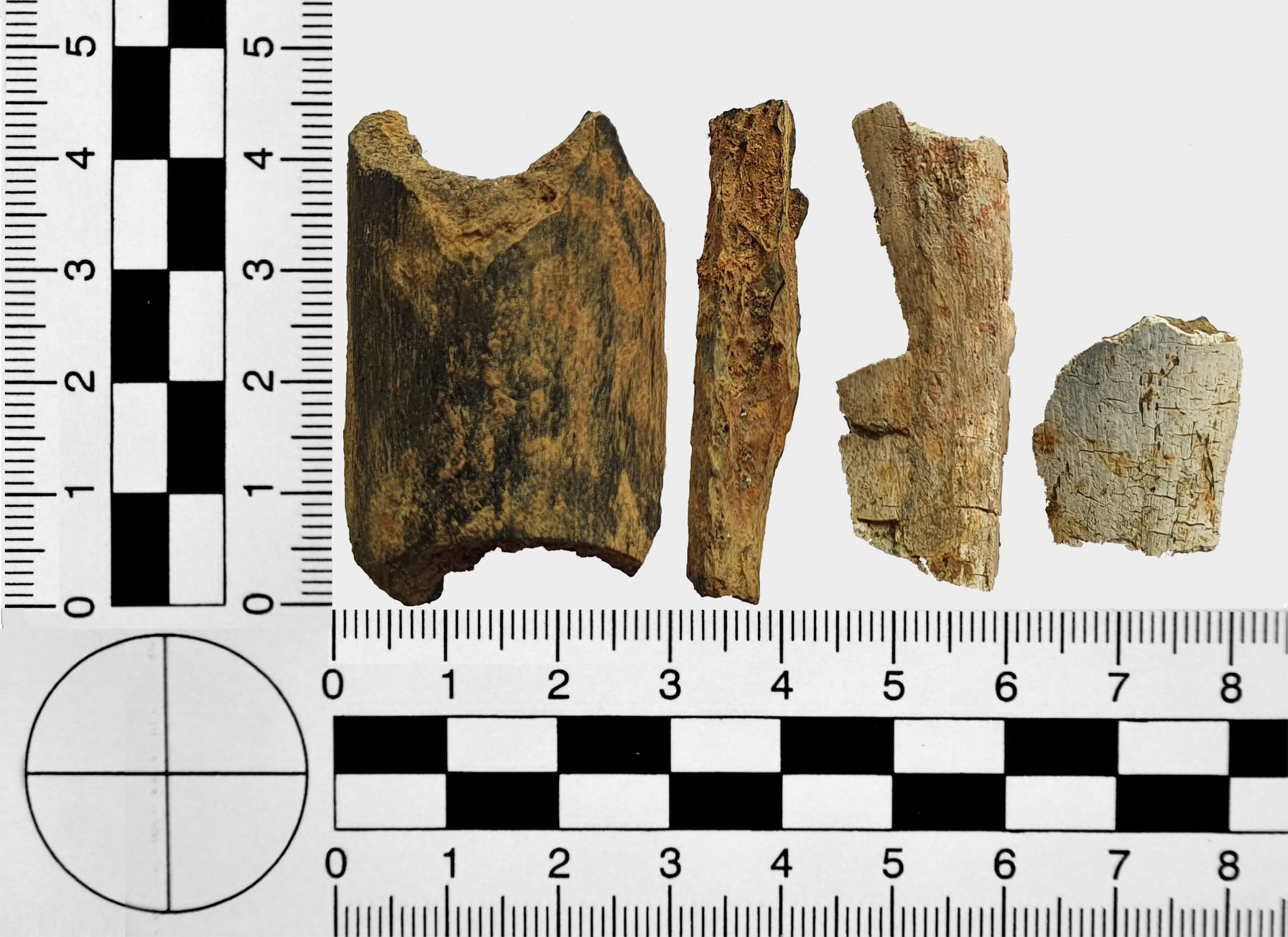 Researchers found fragments of skulls, teeth and femurs, among others. Dawid Kobialka

“According to historical records, the crime was committed by the Gestapo and members of the German police.

“The bullets and shells came from the Walther PPK and P08 Parabellum pistols, suggesting the victims were executed at close range.”

He added: “We found fragments of skulls, teeth, femurs, a thoracic vertebra, among others.

“The bones lie one centimetre or two just below the ground. It was enough to put a shovel in the ground once to see the remains. 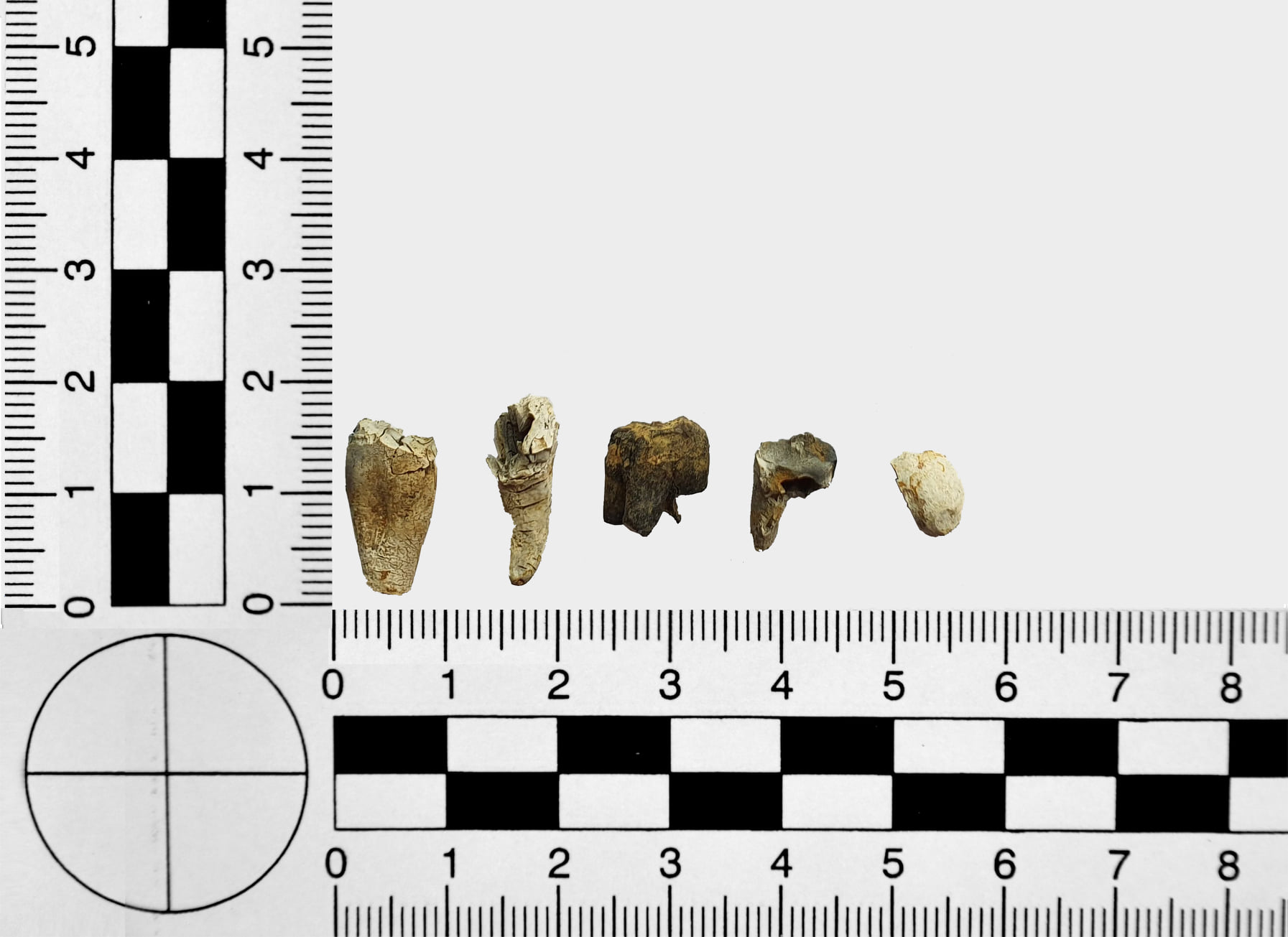 Dawid Kobialka from the Institute of Archaeology and Ethnology of the Polish Academy of Sciences said the bones were discovered one centimetre below the surface. Dawid Kobialka

“There were more burnt human bones than sand.

“Most of the bones are actually ashes because of the temperature of the cremations. That is why the gasoline was used.”

Eye-witness Jan Grunt said gasoline barrels were at Death Valley when the Germans left the site. 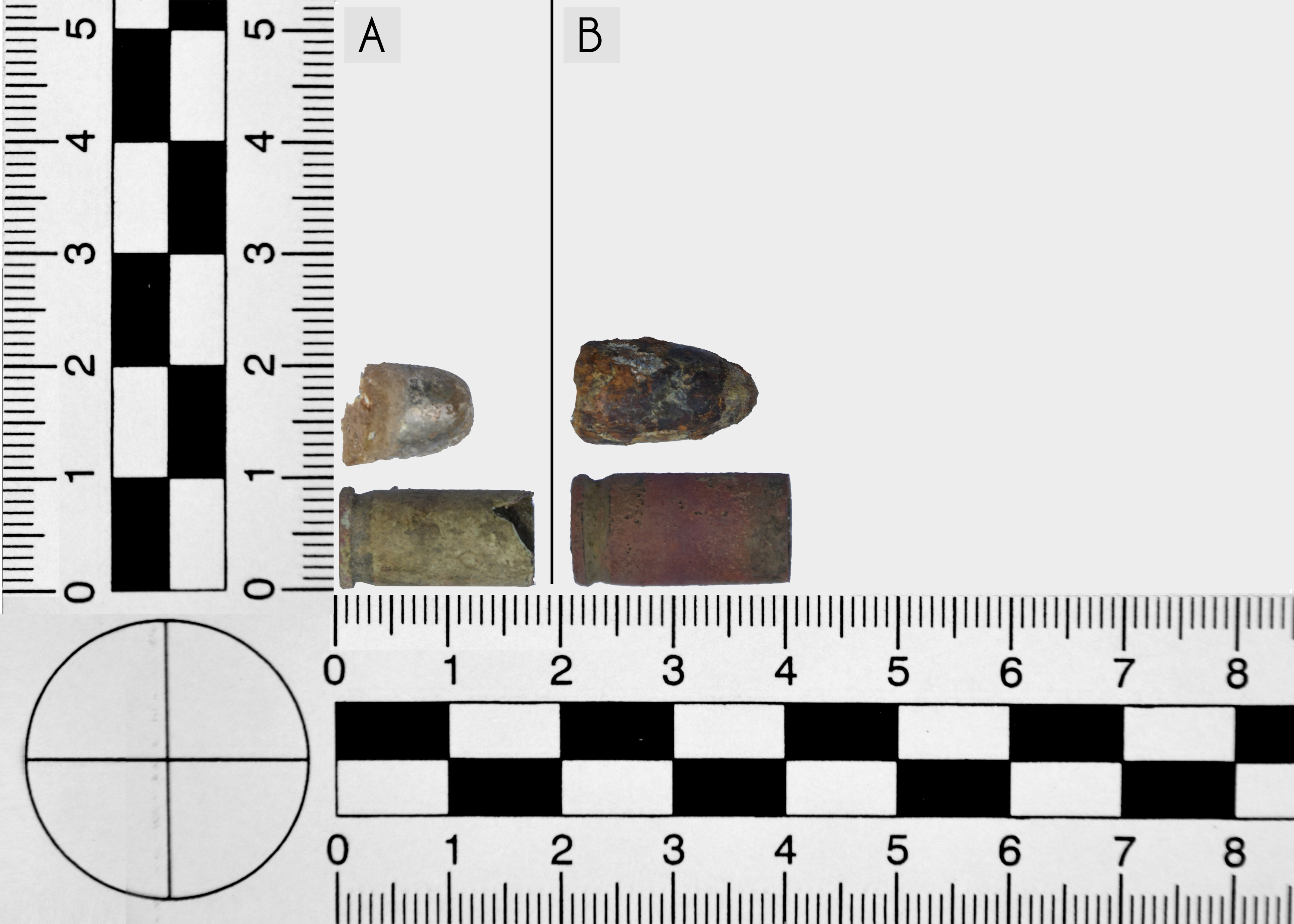 The bullets and shells came from the Walther PPK and P08 Parabellum pistols, suggesting the victims were executed at close range.Dawid Kobialka

He said: “The shootings from pistols were heard almost all night. […]. The bodies were dowsed by gasoline and later burned.

“Three gasoline barrels that still lie in Death Valley confirm it. The fire was discernible for three days and nights at the Death Valley”.

Another eye-witness Kazimierz Janikowski who is now 88 but was 13 at the time of the massacre and helped the researchers locate the site said: “We were going there [to Death Valley] because we were curious about what was happening.

“I was searching there and found [burned human] bones. 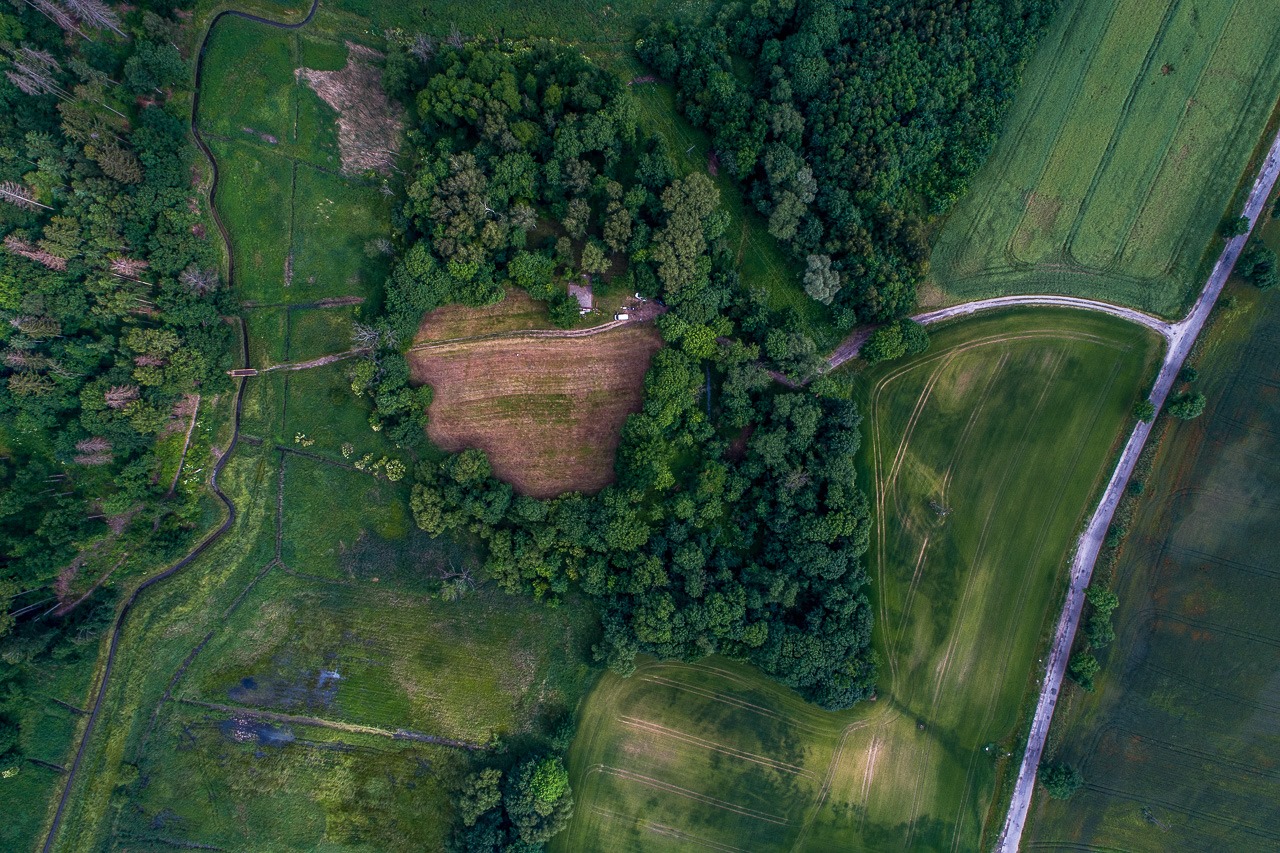 “I still see those 200-litre gasoline barrels. There was stench over town when the bodies were burned.”

Kobialka added that “marks of gasoline are preserved on fragments of wood discovered during the research.”

The researchers also discovered humbling personal belongings the victims had on them when they were killed. 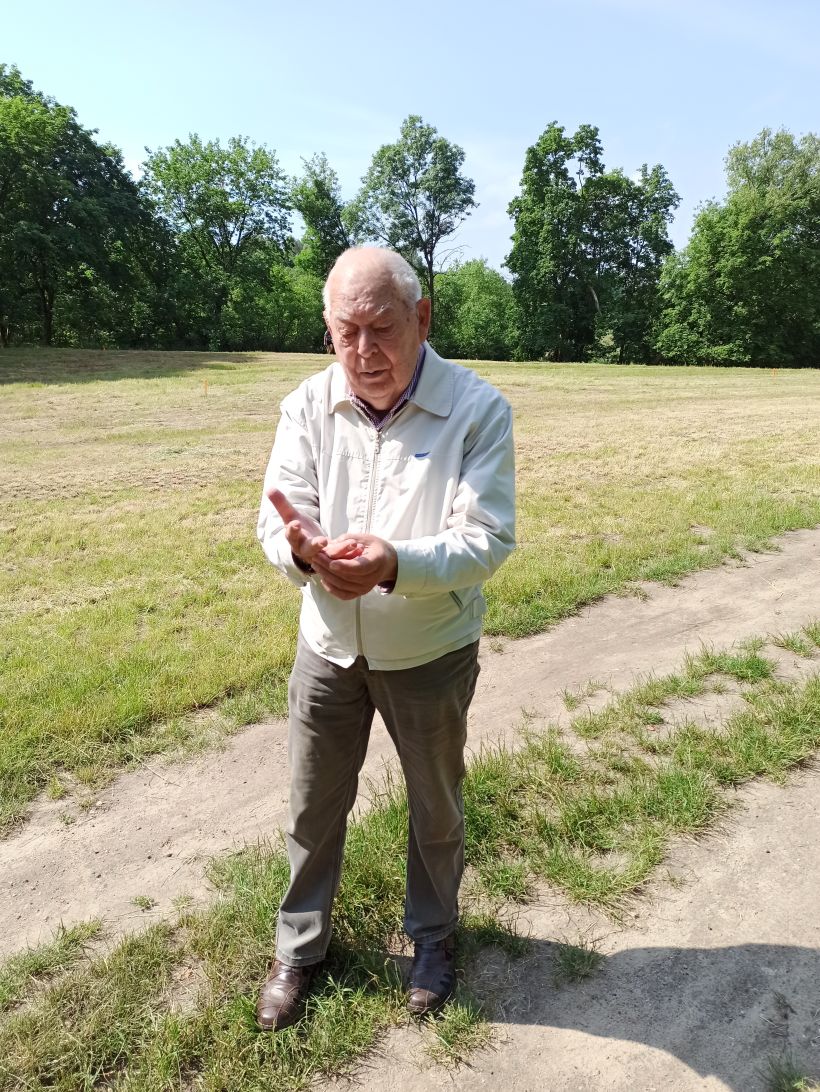 Eye-witness Kazimierz Janikowski who is now 88 but was 13 at the time of the massacre and helped the researchers locate the site said he found the charred remains of bones and recalled a “stench over town when the bodies were burned.”Dawid Kobialka

One photo shows a battered wristwatch, another a spoon and plate.

Yet another photo shows the fragment of a woman’s broach, confirming testimonies that both men and women were slaughtered.

Named Death Valley by locals, the area covers around 1.5km.

Towards the end of the war, Gestapo officers shot dead around 600 prisoners in the ‘valley’ before setting their corpses on fire. 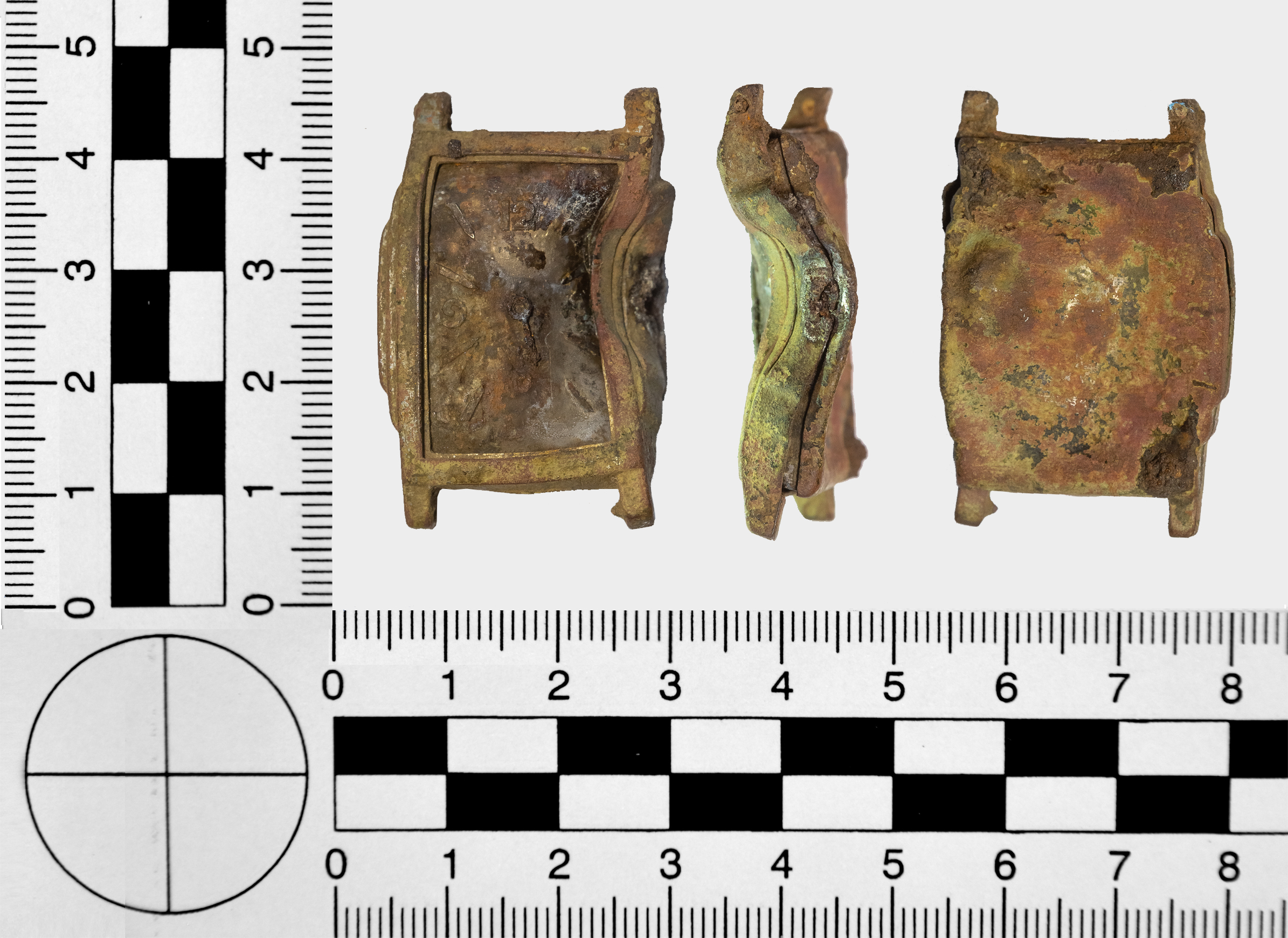 Researchers also discovered the personal remains of victims including a battered wristwatch.Dawid Kobialka

Kobialka said: “There were several columns of people and they went in different directions. One of them was herded to Chojnice and murdered in Death Valley.

“The townspeople saw a glow of light at night on the outskirts of the city in the Valley of Death, and a terrible smell of burning went over the city.

“The most probable version of events is that they were Gestapo prisoners from the prison in Bydgoszcz.

“There, among others, were detained members of the Polish resistance who were captured at the turn of 1944-1945.” 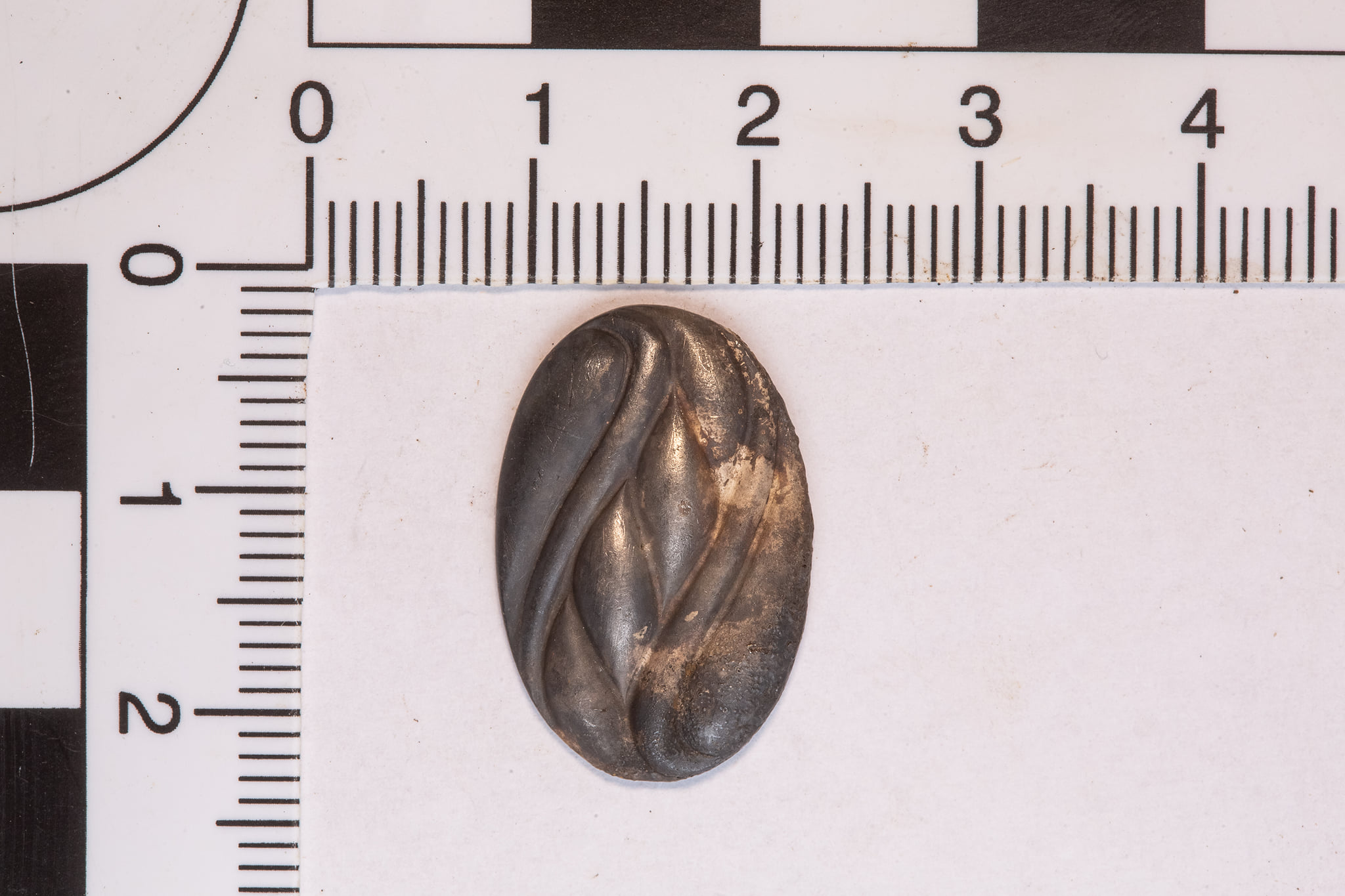 The fragment of a woman’s broach found at the site confirms testimonies that both men and women were slaughtered.Dawid Kobialka

He added: “In materials we found in one document, there is an annotation that in Death Valley, then it was called Ostrówek, about 600 people were murdered and burned.”

The Chojnice killing fields lie just 50 miles north of the town of Bydgoszcz where the Germans carried out a brutal repression following Hitler’s invasion of Poland in September 1939.

By the end of the war, it is estimated that around 36,350 civilians had been ‘liquidated’ by German forces in Bydgoszcz and the surrounding areas. 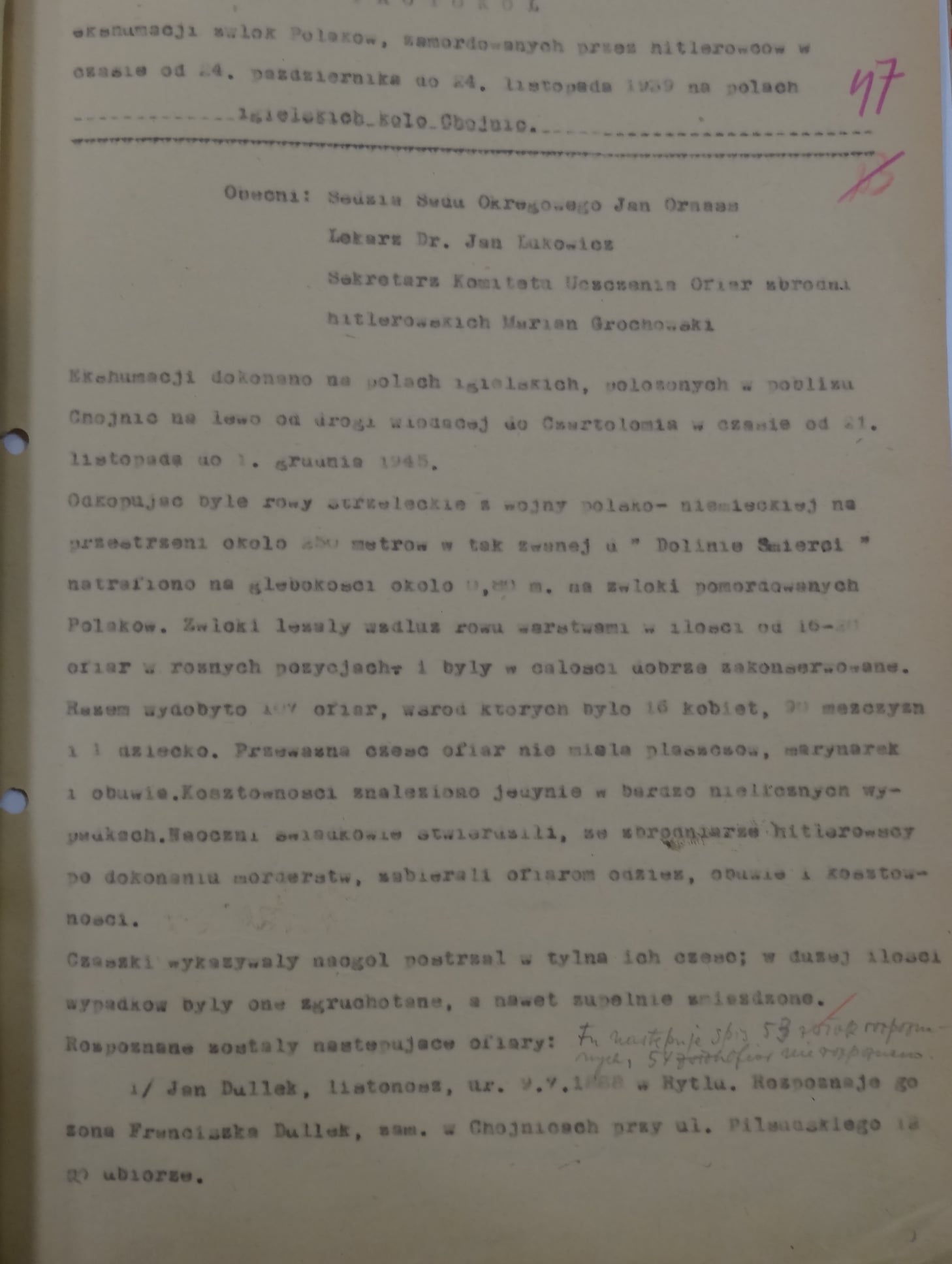 Although the 1945 massacre remains something of a ‘mystery’ it is known that Gestapo officers shot dead around 600 prisoners in the ‘valley’ before setting their corpses on fire.Dawid Kobialka

Kobialka said: “When the Red Army were coming from the south in January 1945, the Germans organised the evacuation of the prison.

“A few columns of prisoners were made, with some of them going to the west.

“One of them went to Chojnice under the supervision of Gestapo guards.

“The guards, according to one of the witnesses, organised the massacre.” 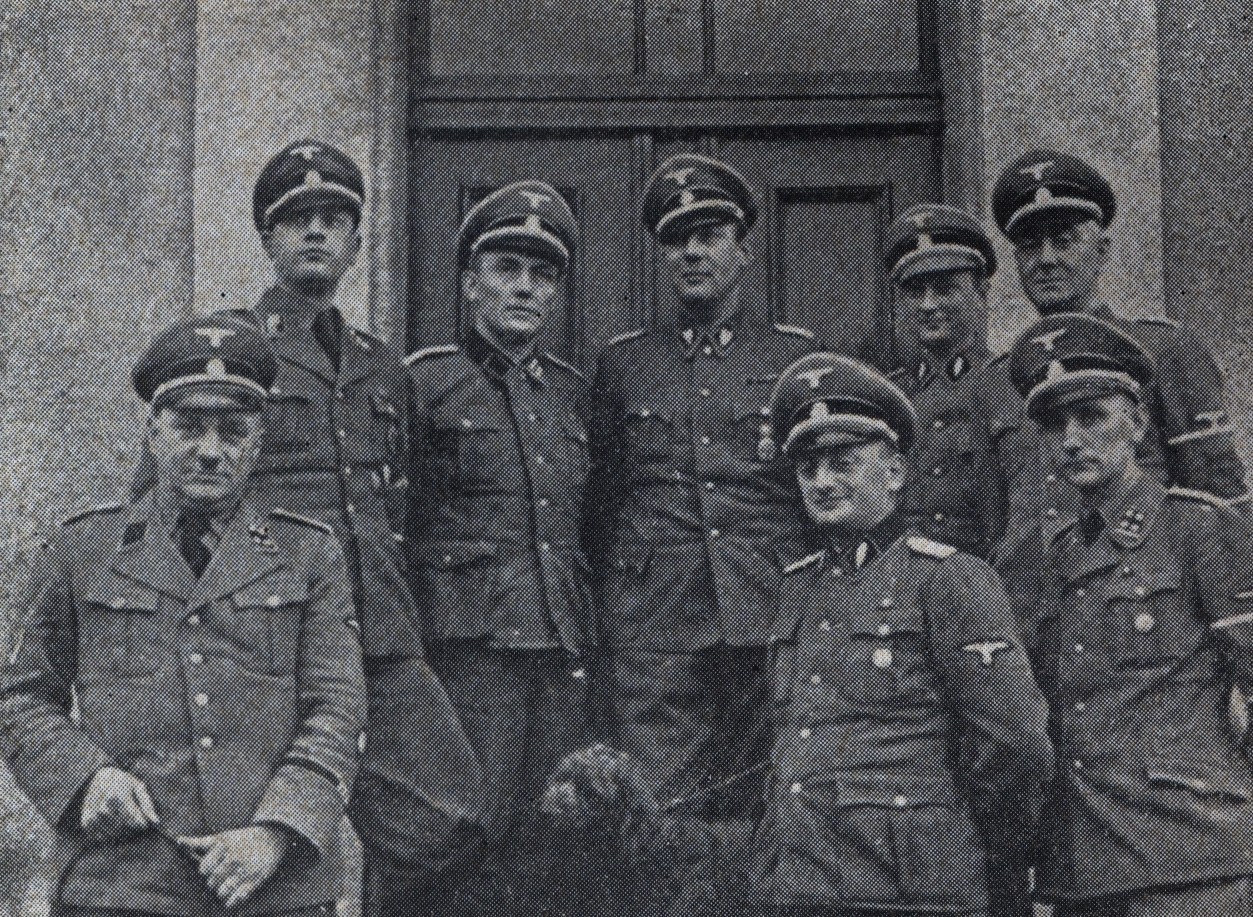 Earlier this year, the Institute uncovered remains from the 1939 massacre led by Heinrich Mocek (front row, second from right), a sadistic Nazi officer who between October 1939 and January 1940 ordered extensive exterminations.Public domain

Earlier this year, the Institute uncovered remains from the 1939 massacre where in the early stages of WWII, German SS shot dead more than 500 locals as part of their 'action against the intelligentsia’ who the Third Reich considered ‘dangerous’.

In charge of operations was Heinrich Mocek, a sadistic Nazi officer who between October 1939 and January 1940 ordered extensive exterminations across the whole region as part of the Nazis’ Polish Intelligentsia Action, which saw around 30,000-40,000 Poles living in the Pomerania region murdered.

He was later convicted for a string of atrocities and sentenced to life imprisonment in 1965 by a West German court.

But by the time the Red Army arrived he had fled Poland, leaving the question of who ordered and carried out the 1945 massacre unanswered. 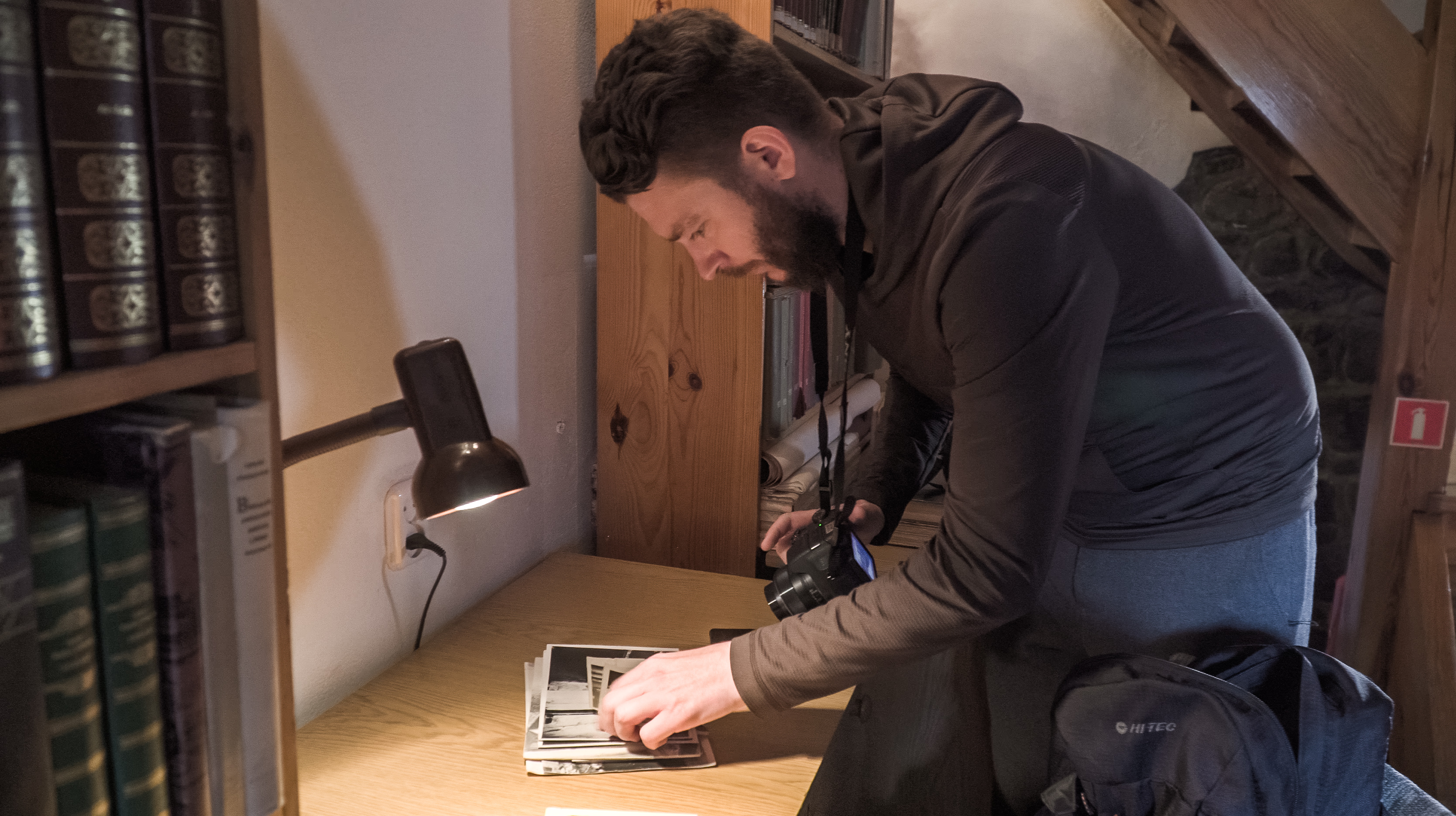 Kobialka (pictured) said: “We are still looking for historical records that will shed light on the subject.”Dawid Kobialka

“But the massacre in January 1945 is a mystery. We found burned human bones close to the meadow.

“So, Death Valley embodies different locations near Chojnice that were the theatre of mass executions during the Second World War.

“We are still looking for historical records that will shed light on the subject.”