Measuring just 45 centimetres across and 30 centimetres deep, it claims to be the smallest museum in Europe.

These are the dimensions of a 100-year-old suitcase which is the official headquarters of the Button Museum.

Fascinating and curious in equal measure, this pint-sized cultural institution is bursting at the seams with big stories about some of the most famous names in Polish history and contemporary culture. 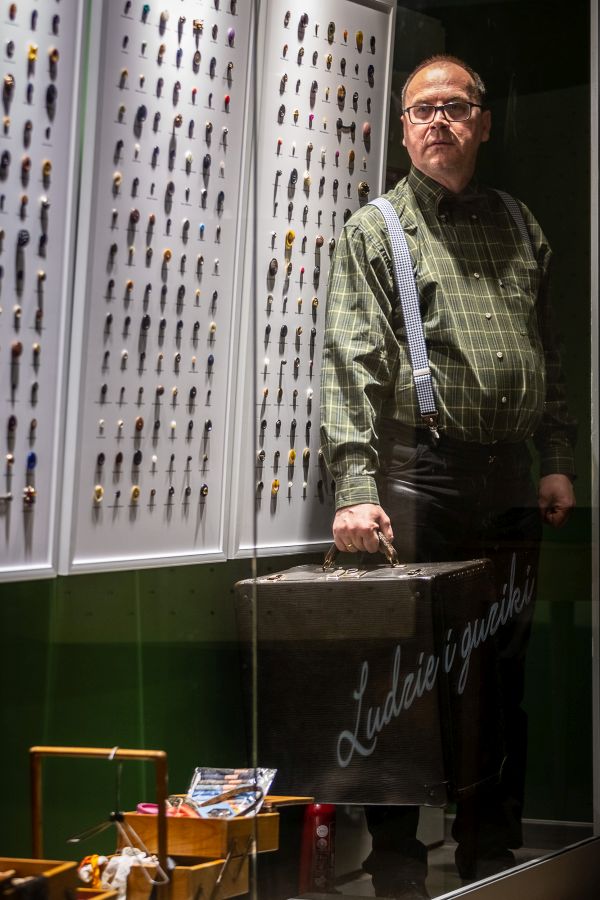 Rutkowski says the focus of the museum is not so much the buttons but the stories behind them. “Since the very beginning of the museum we have been interested in the people they belonged to,” he said.Kalbar/TFN

What knits them all together is their buttons, which make up the museum’s collection.

Despite its home being a piece of vintage luggage, the museum is firmly rooted in the historic Mazovian town of Łowicz about 100 kilometres west of Warsaw, where it has beguiled visitors with its quirky collection since 1997.

After difficulties ensuring wheelchair access in its previous premises, in April this year the museum moved to a shop window on the ground floor of a small indoor shopping arcade a button-throw from the town’s charming triangular market square. 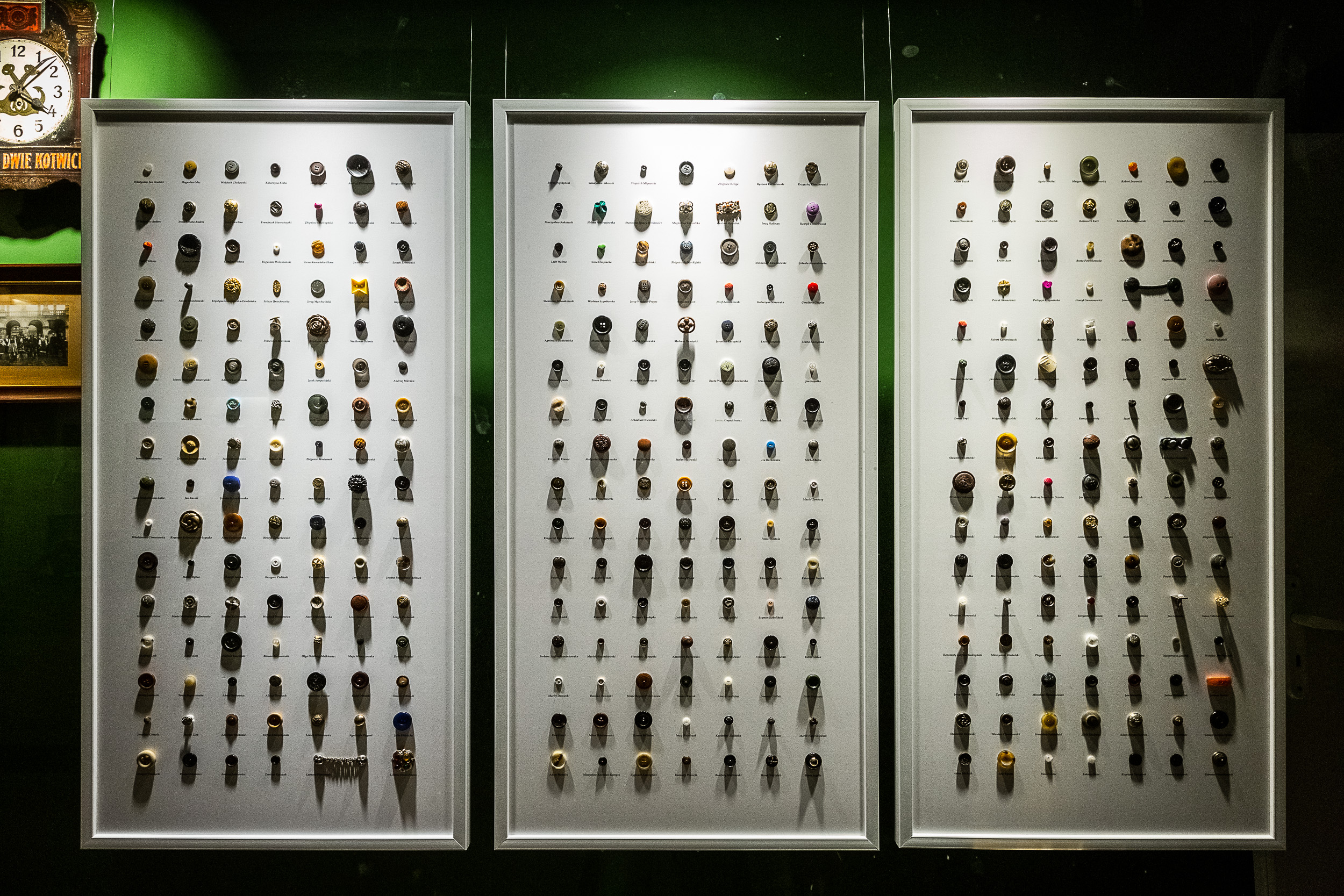 Awaiting visitors are three white boards displaying around 400 of the museum’s collection of over 4,000 buttons along with the name of each button’s original owner printed underneath.Kalbar/TFN

Awaiting visitors are three white boards displaying around 400 of the museum’s collection of over 4,000 buttons along with the name of each button’s original owner printed underneath. Alongside these display boards is a mini exhibition of locally sourced haberdashery-related items at the centre of which is an impressive vintage sewing machine.

The man behind this button bonanza is museum founder and chief button hunter Jacek Rutkowski. Hugely knowledgeable about his town’s history, the rapid fire and intensity of his speech suggest a passion bordering on obsession. This, however, can be explained by his personal links to the museum.

When the Red Army swept into the town in 1945, a looting mob of thuggish soldiers mistook his grandmother’s haberdashery store on the market square for a jewellery shop and ransacked it. 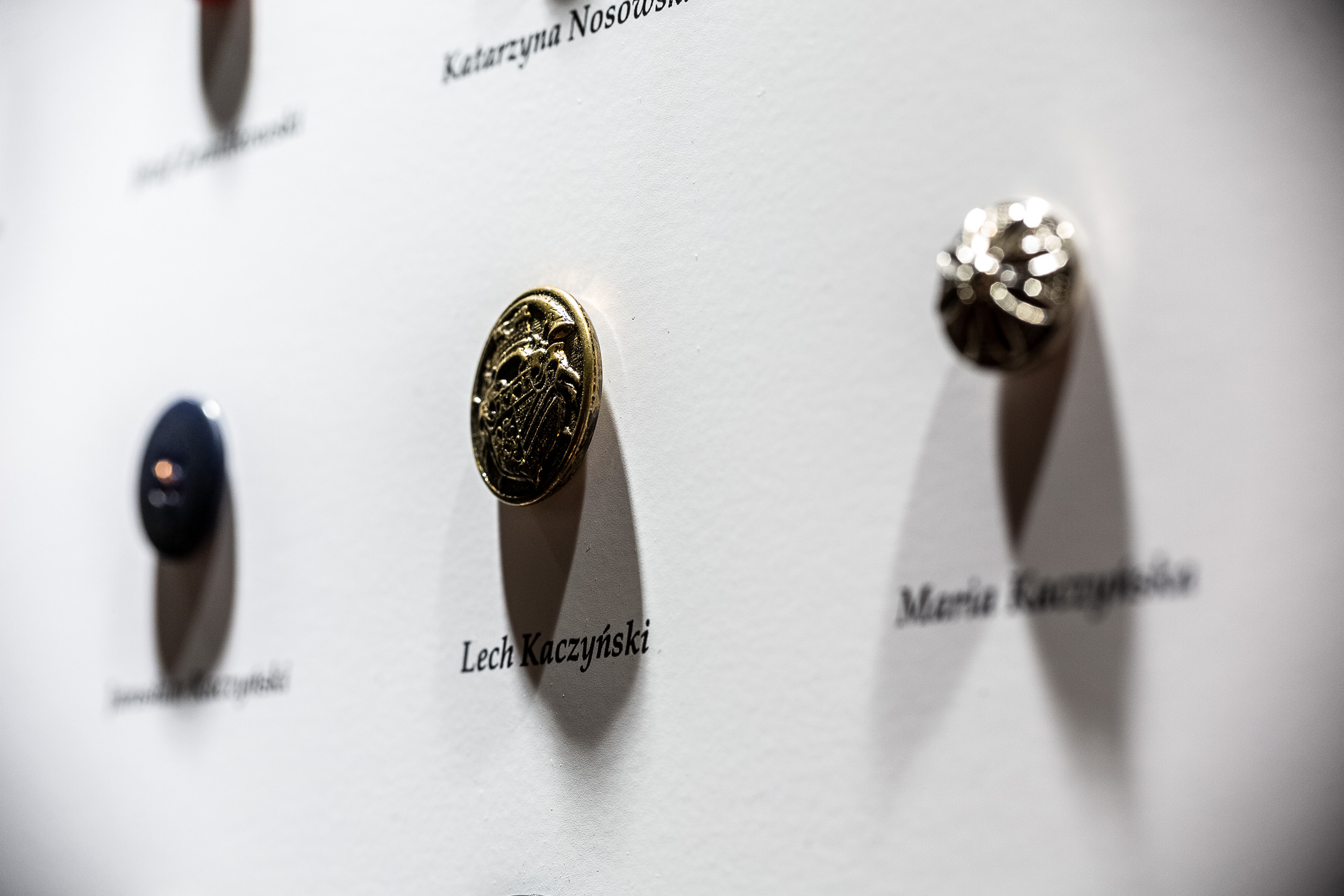 The spine stiffens at the poignant sight of the buttons of Lech and Maria Kaczyński.Kalbar/TFN

The damage they caused forced her to close the business and the buttons that lay strewn across the floor were swept up and placed in Rutkowski’s grandfather’s old suitcase, the one that is now the official home of the museum.

The button’s themselves cover a range of different styles. Those of military men, such as Poland’s wartime commander-in-chief and prime minister in exile Władysław Sikorski who died tragically in a suspicious air disaster in Gibraltar in 1943, are appropriately brass buttons taken from their uniforms.

Meanwhile, those of church big hitters such as former Archbishop of Warsaw Józef Glemp once adorned their cassocks. Most, though, are simply ordinary buttons from the clothing of the people they once belonged to. 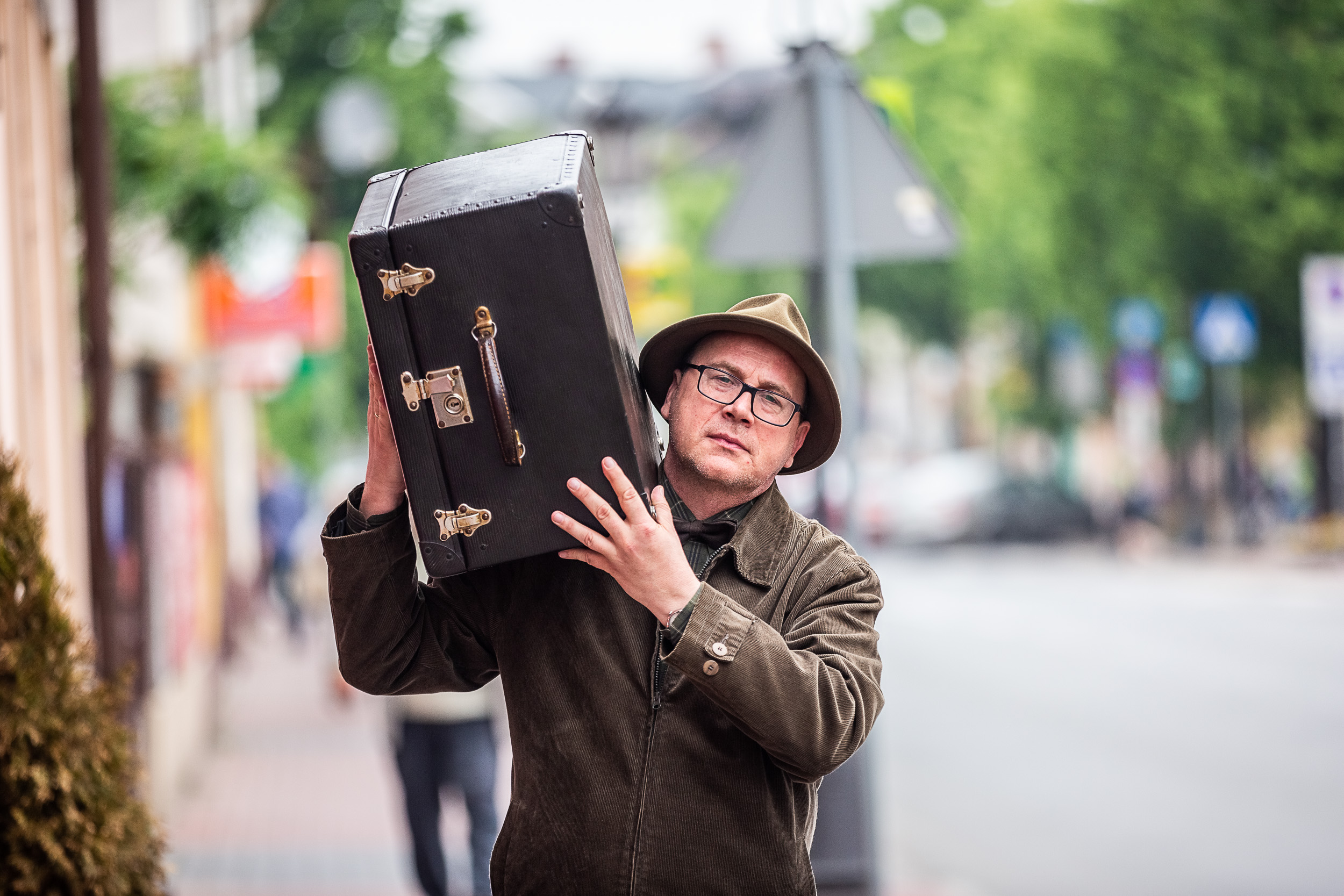 The museum is housed inside Rutkowski’s grandfather’s 100-year-old suitcase which measures just 45 centimetres across and 30 centimetres deep.Kalbar/TFN

However, the focus of the museum is not so much the buttons but the stories behind them. Rutkowski told TFN: “Since the very beginning of the museum we have been interested in the people they belonged to.

“Buttons are a pretext to explore historical events and tell stories about important and interesting characters.”

And this is the source of the charm and fascination of Rutkowski’s dreamchild. Visitors might be looking at a panel of plastic and tin buttons next door to a mobile telephone outlet in a small provincial town, but they are actually embarking on an exhilarating whistle-stop tour of Poland’s recent history and contemporary national life. 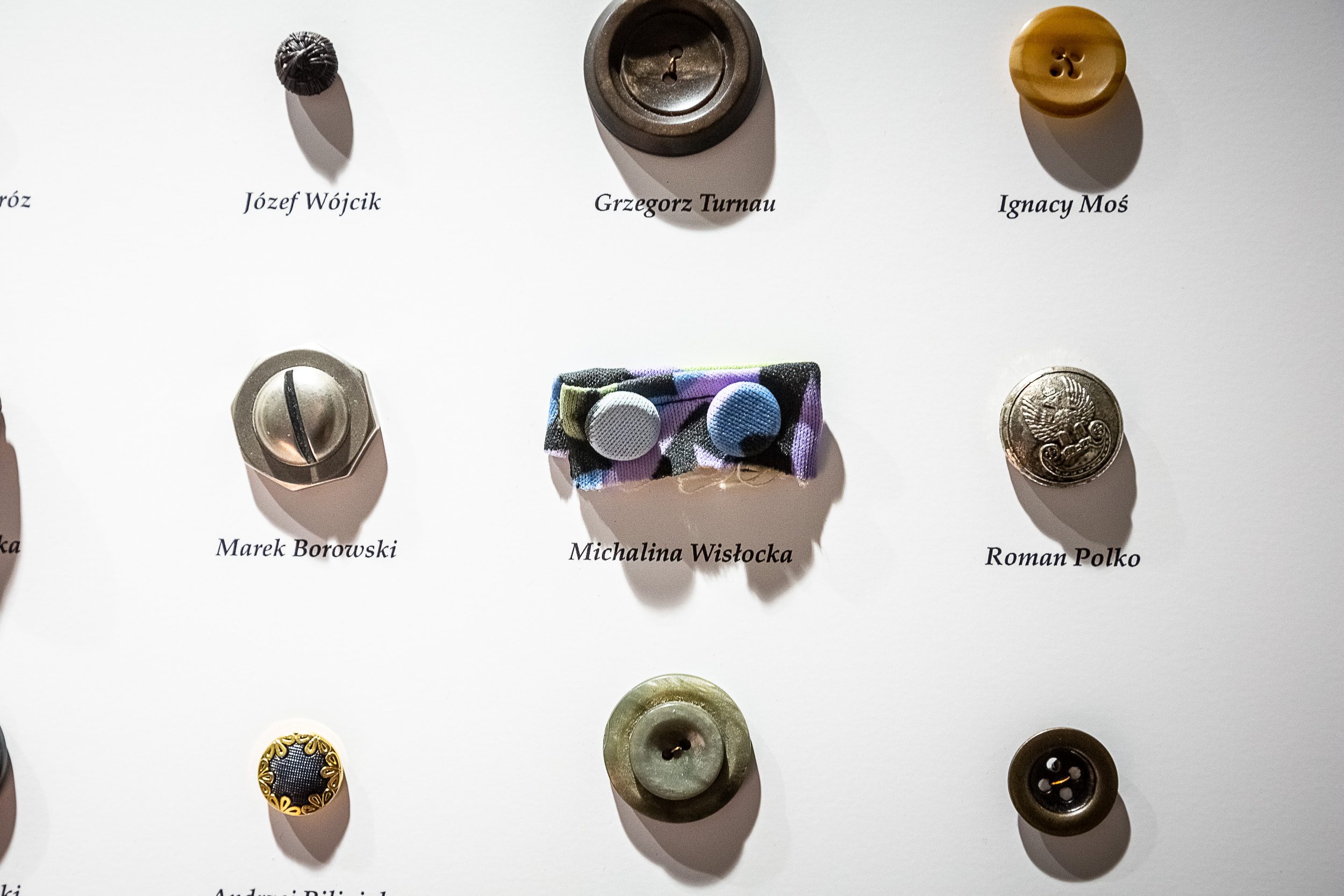 A button belonging to Michalina Wisłocka, who turned out to be a pioneer sexologist who taught post-war Poles the art of love, is on display.Kalbar/TFN

Well-known names from different periods and areas of life jump out at the museum’s visitors at an alarming pace, prompting knowing nods of recognition seasoned with frantic audits of the recesses of their memories to furnish a name with the correct biography.

Poland’s turn-of-the-century artist and creator of the Zakopane architectural style Stanisław Witkiewicz is an easy name to start with. A tougher nut to crack is Michalina Wisłocka, who turned out to be a pioneer sexologist who taught post-war Poles the art of love.

Clever juxtapositions give the exhibition a slightly risqué character. The buttons of film producer Lew Rywin is placed alongside that of newspaper baron Adam Michnik, both of whom were embroiled in a corruption scandal which shook Poland’s political landscape at the start of the millennium. 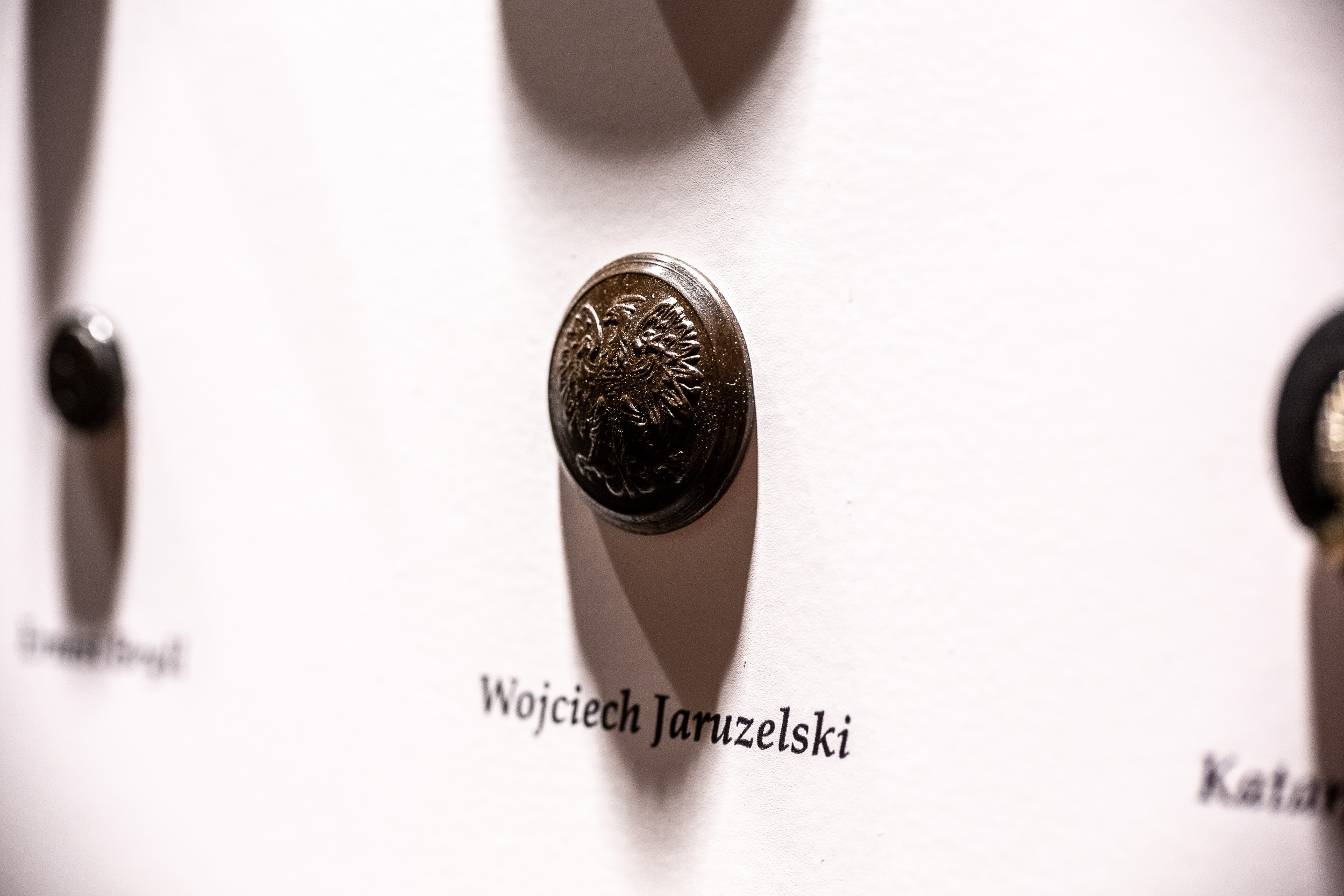 The button of Wojciech Jaruzelski comes from the uniform he was wearing during his now darkly iconic television address he gave at six in the morning on 13 December 1981 announcing the introduction of Martial Law.Kalbar/TFN

Some exhibits are witnesses to history in their own right. The button of Wojciech Jaruzelski comes from the uniform he was wearing during his now darkly iconic television address he gave at six in the morning on 13 December 1981 announcing the introduction of Martial Law.

The spine stiffens at the poignant sight of the buttons of Lech and Maria Kaczyński, and the sombre tone thickens when the gaze drifts to the shiny gold costume button of the recently murdered mayor of Gdańsk Paweł Adamowicz.

Some buttons are so sacred that they are not placed on general display. A button that belonged to Pope John Paul II is kept securely in special deposit and occasionally lent to other institutions on special occasions. 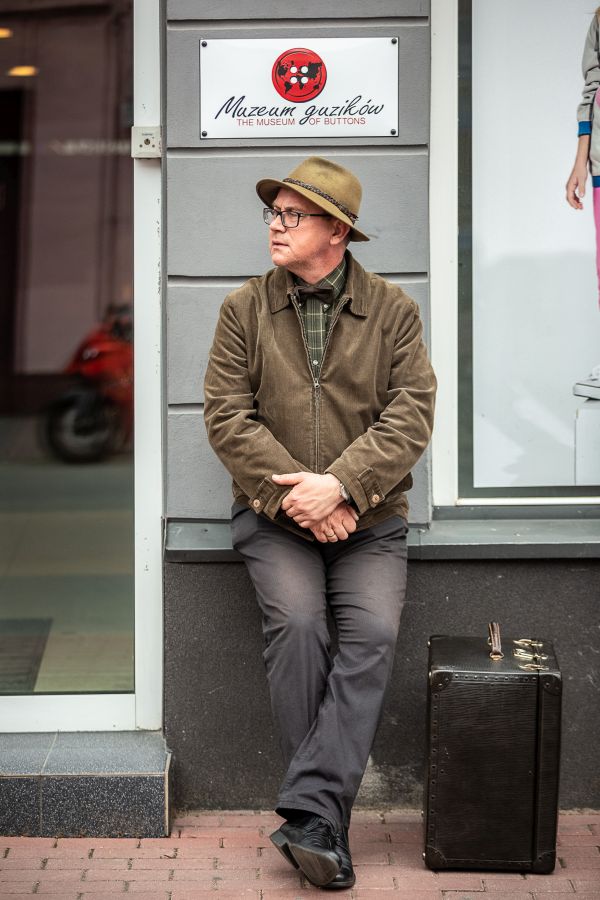 Rutkowski says he has buttons from all of Poland’s presidents apart from Andrzej Duda which he is now waiting for.Kalbar/TFN

Are there any buttons that the museum would like to add to its collection? Rutkowski flashes back with his reply, “I haven’t received a button from Andrzej Duda yet, which is odd because I have all the other Polish presidents”.

It is surely only a matter of time before a small package arrives in Rutkowski’s mailbox sent from Krakowskie Przedmieście 48/50, after all which Pole wouldn’t want their garment fastening among such a colourful and august collection that Rutkowski has spent over 20 years assembling.

'We stand with you', Biden tells Ukraine in his Warsaw speech