Barnstorming: the artist who brings the past back to life on the side of barns in stunning murals

Often bold and exhilarating, outbreaks of XXL street art have long been a frequent feature of Poland’s major conurbations, but in the deep south-east one artist has reimagined the genre with a stunning series of paintings that have seen a string of rural barns utilized as his canvas of choice.

Titled Cichy Memoriał (Silent Memorial), the project has seen Arkadiusz Andrejkow transform thirty barns this year in the Podkarpacie region in which he is based. 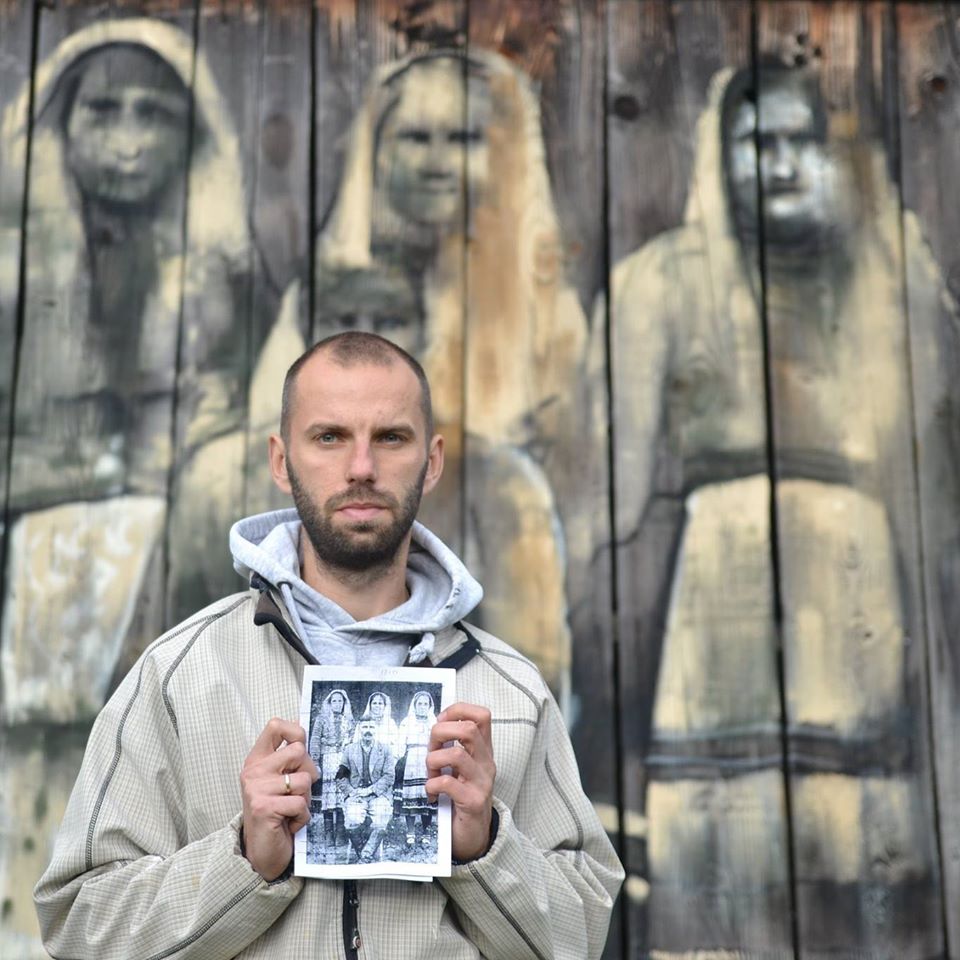 Using old photographs as his reference, Andrejkow’s undertaking presents the families and people that formerly lived and worked in and on the properties.Arkadiusz Andrejkow/Facebook

“I’ve always looked for unusual substrates on which to present my work,” he tells TFN, “as I’m keen to connect my art to both nature and the surrounding environment.”

Using old photographs as his reference, Andrejkow’s undertaking presents the families and people that formerly lived and worked in and on these provincial properties, with the weathered surfaces proving the ideal surface for his work. 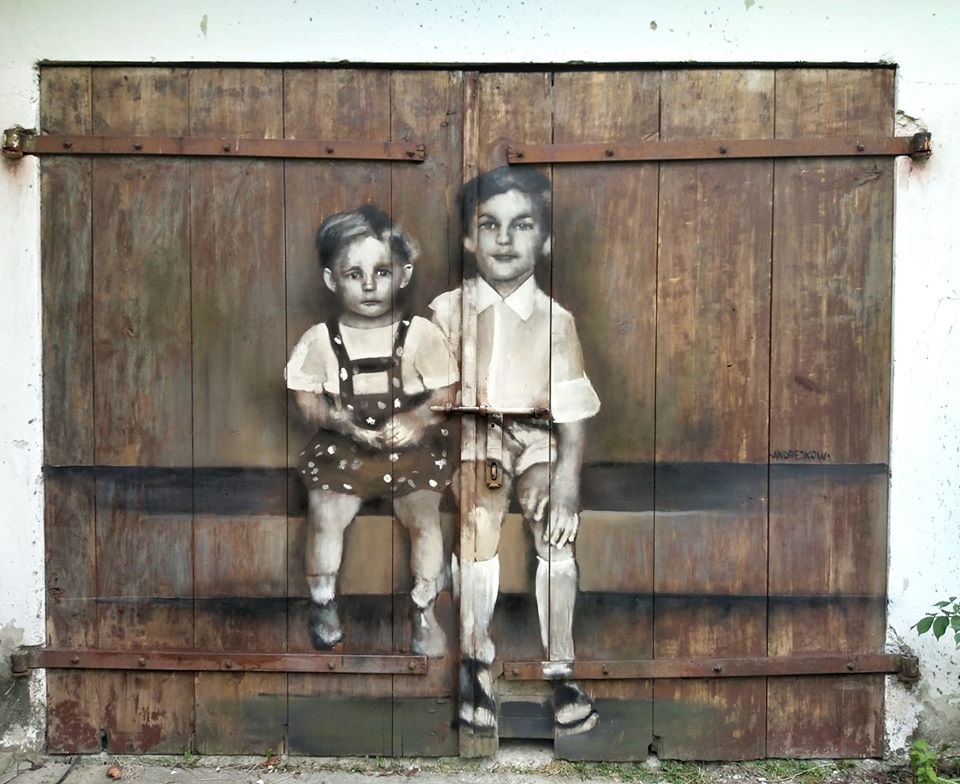 A sister and brother sit side by side. The boy would later be die in a freak accident.Arkadiusz Andrejkow/Facebook

“Ever since my student days I’ve found inspiration in old photographs,” he says, “and living as I do in Podkarpacie, there’s a lot of wooden architecture evident in the countryside – the aged and worn materials of these structures act as a great canvas on which to paint such scenes because of the way the characters I depict blend so seamlessly into the wood. Furthermore, the barns themselves offer a great backdrop for such imagery.” 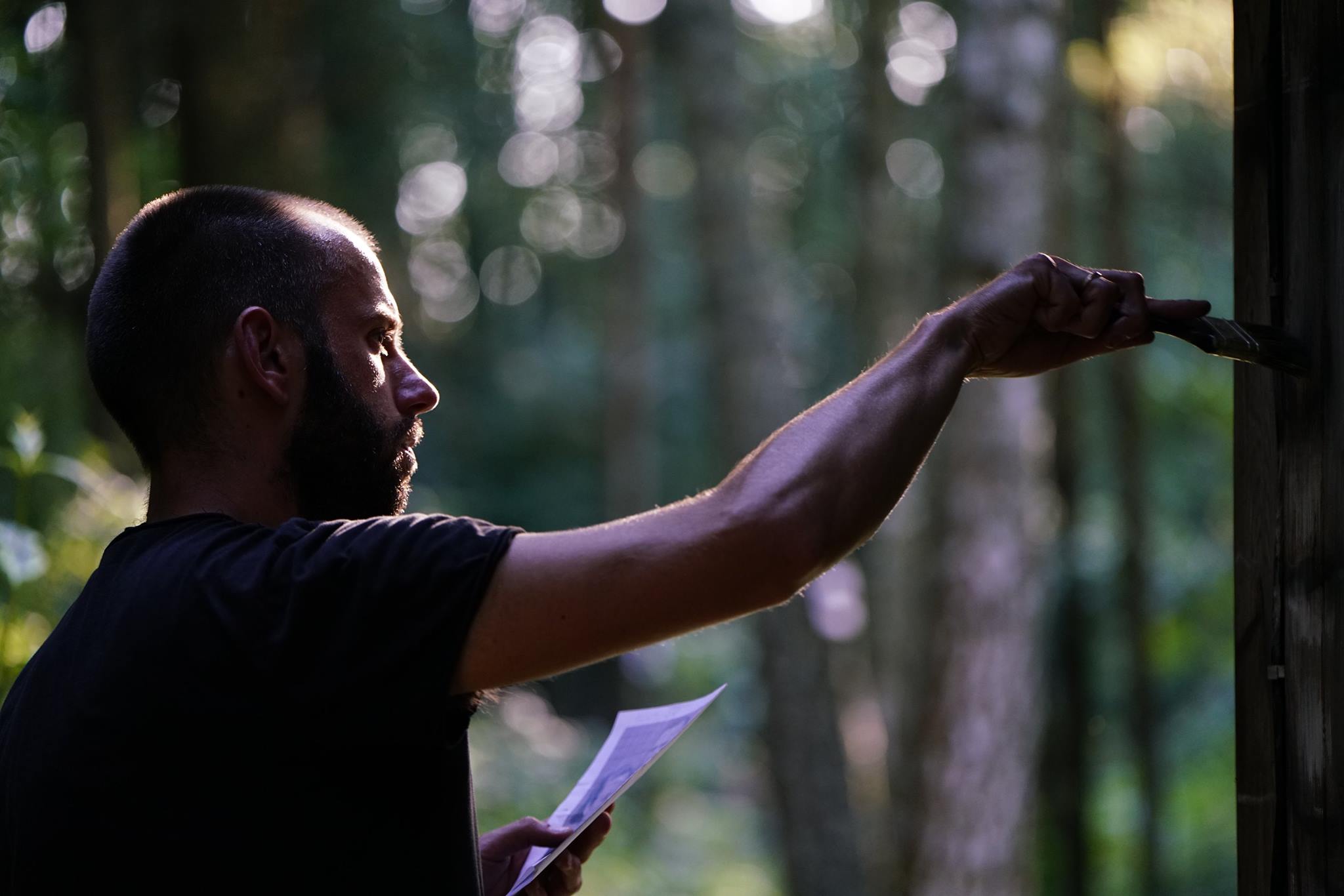 The weathered surfaces of the barns provide the ideal surface for his work.Arkadiusz Andrejkow/Facebook

Taking a day to paint one mural, each is designed beforehand on computer with Andrejkow relying on scans and photos of the barns and people he paints to plot his work ahead of time. Unable to drive himself, only when he arrives to a location site on the day of painting does he get his first physical glimpse of the barn he will work on. 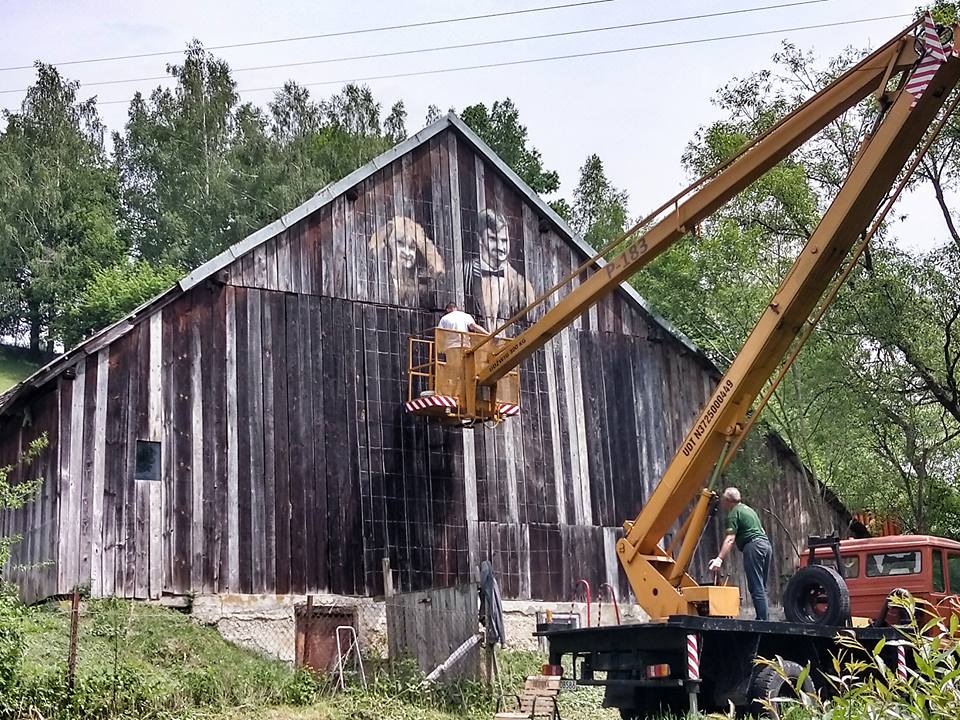 Naturally, this has presented several challenges along the way: “I might be working from bad quality scans, so there’s been times the barns have been difficult to paint from a technical point of view,” he says. “On top of that, there’s been a few occasions when the scaffolding itself has felt pretty wobbly and unsafe.”

Though entirely self-funded, Andrejkow’s labour of love has reaped rewards that far outweigh the material costs he has incurred, and the Sanok-born artist counts this current project as his greatest professional triumph to date. 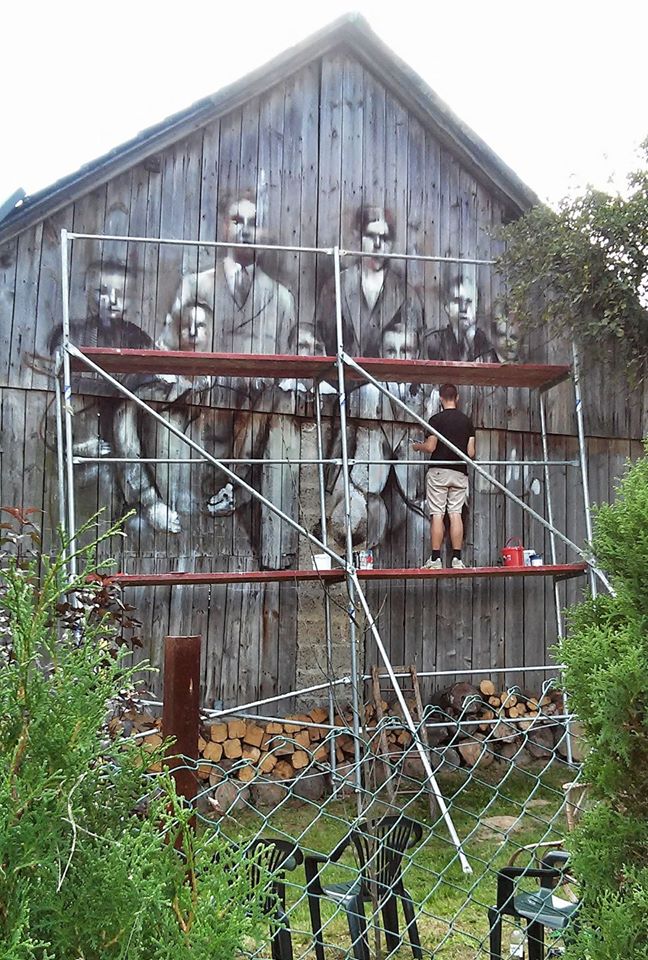 Wobbly scaffolding has given him a few scary moments.Arkadiusz Andrejkow/Facebook

“Without doubt,” he says, “I do become emotionally attached to these images – as it stands, I count Cichy Memoriał as my biggest artistic achievement to date. The project itself has developed much since its inception, and fresh ideas have pushed me to find new solutions.”

Yet beyond stretching the boundaries of his own creative abilities, the project has also brought him spiritually closer to the area of his upbringing. 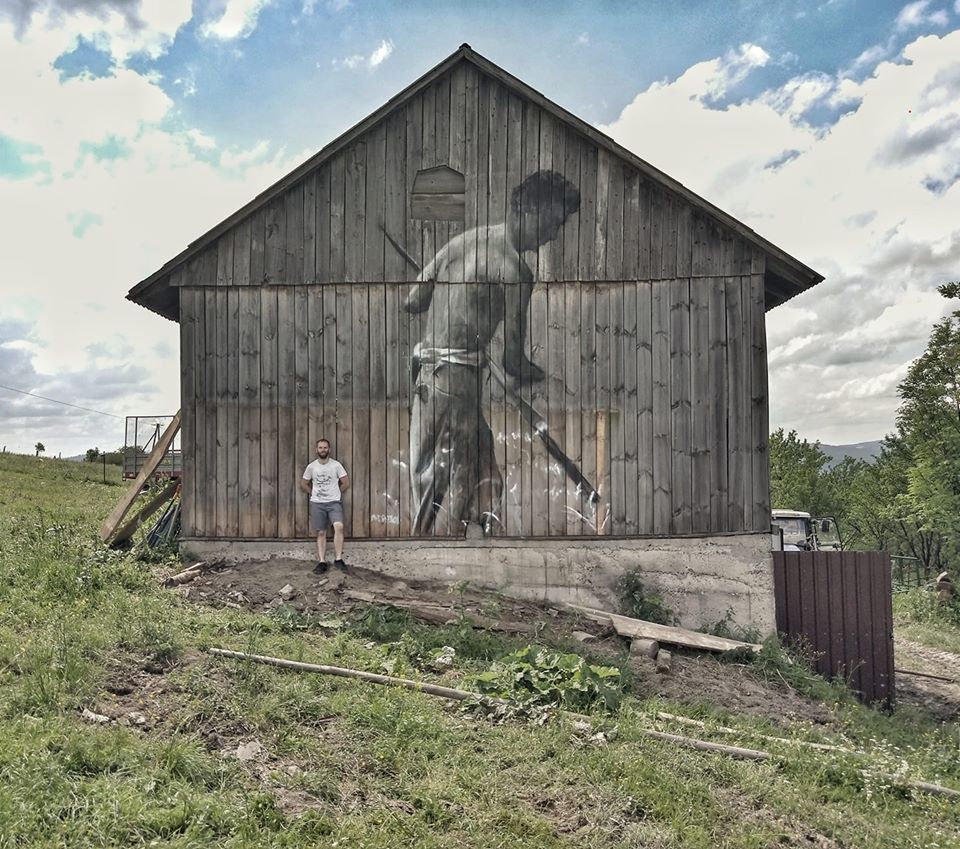 “The people that once lived in these villages are the true heroes of my paintings,” he says.Arkadiusz Andrejkow/Facebook

“I feel how important this is to the people and families of those that I paint,” he says. “Village residents often approach me while I’m working to tell me their stories about the people I’m painting or just to reminisce about the good old days. As such, there have been emotional moments; at times, people have even been moved to tears.” 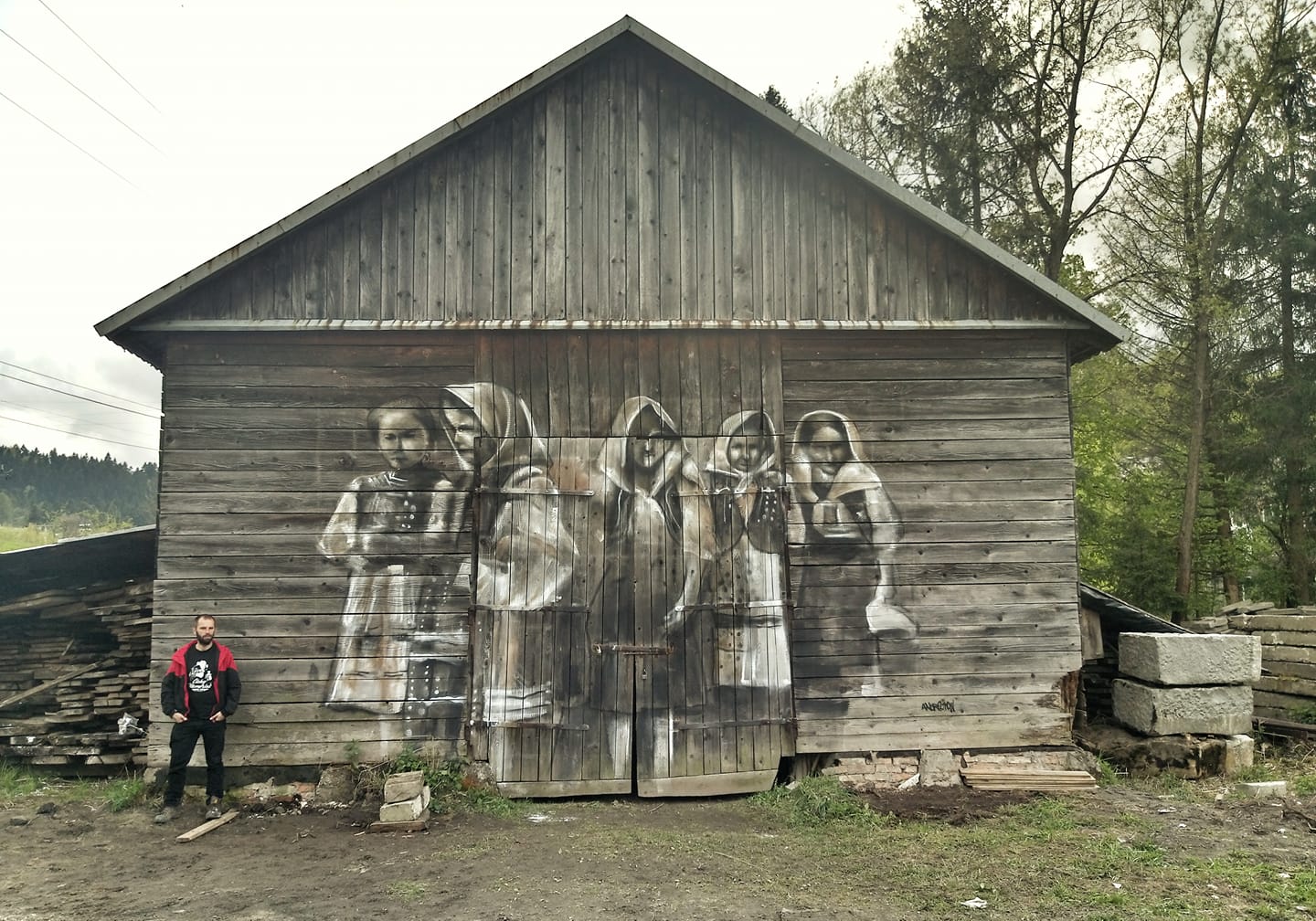 The pictures tell a story of the people who once worked the land around the barns.Arkadiusz Andrejkow/Facebook

Providing a fascinating insight into bygone times, Andrejkow’s magnum opus is a heartfelt celebration of rustic Poland that revaluates the humble farmer as an everyday hero.

“The people that once lived in these villages are the true heroes of my paintings,” he says. “The people I depict often personally built these barns or raised the animals inside themselves. They’re ordinary people, but they worked tremendously hard and were the lifeblood and identity of their micro-community.” 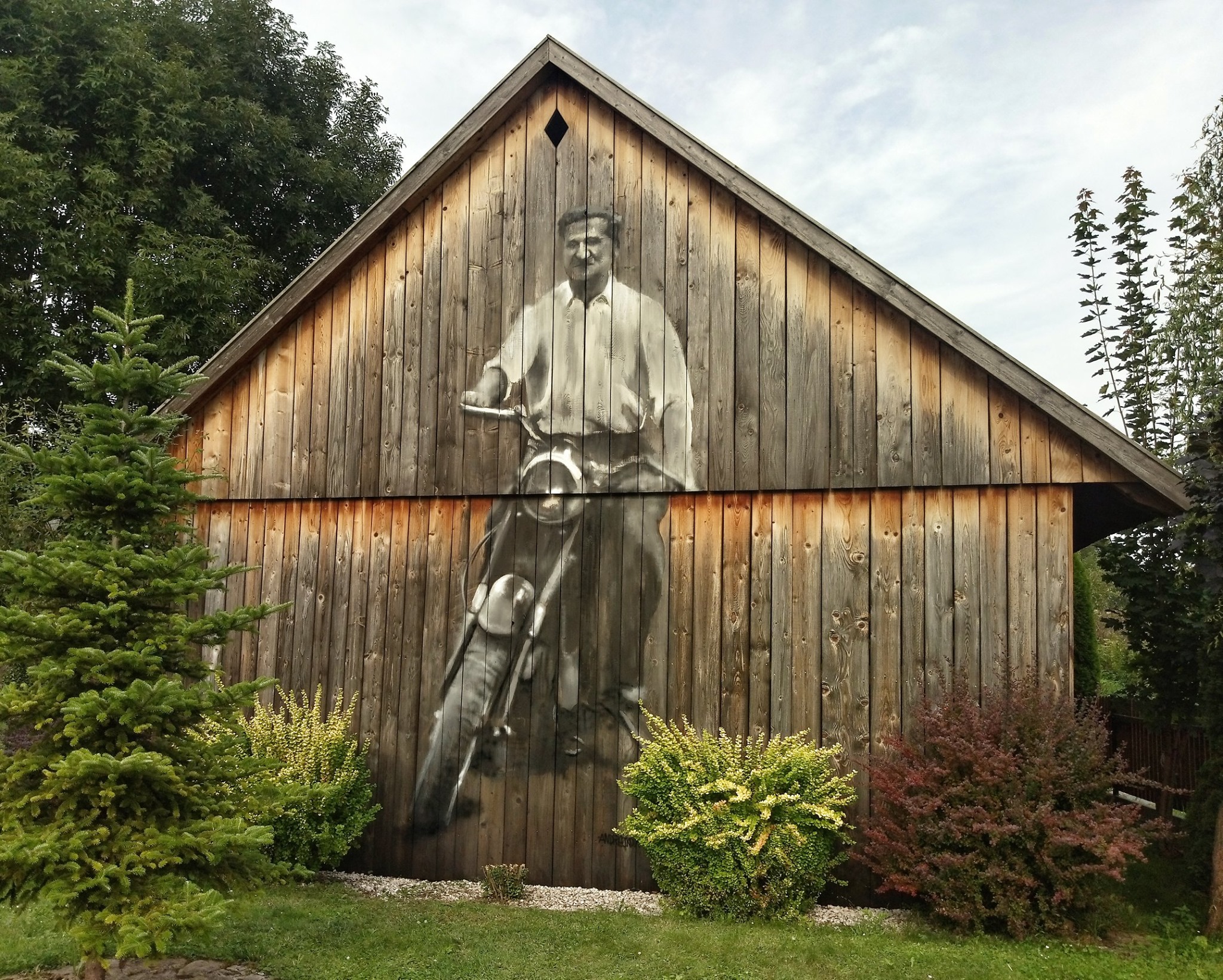 A chance meeting led to the artist painting a picture of the grandfather of the man he met.Arkadiusz Andrejkow/Facebook

While the underlying narrative strand remains consistent, the artist is quick to point out the uniqueness of each work. “Every photo I work from, and every barn that I paint on, has its own individual story,” he says.

As if to underscore this point, he recalls how one work was the result of a serendipitous fluke of fate. “One time a guy came up to me and was telling me how he really enjoys my work. He mentioned he lives in Bzianka so I told him that I’d painted in that village before – an unidentified girl sitting on a tree stump. As it transpired, the barn had once belonged to his grandparents. Because of this accidental meeting, I ended up painting his own barn with a mural of his granddad riding one of the motorbikes he so avidly collected.” 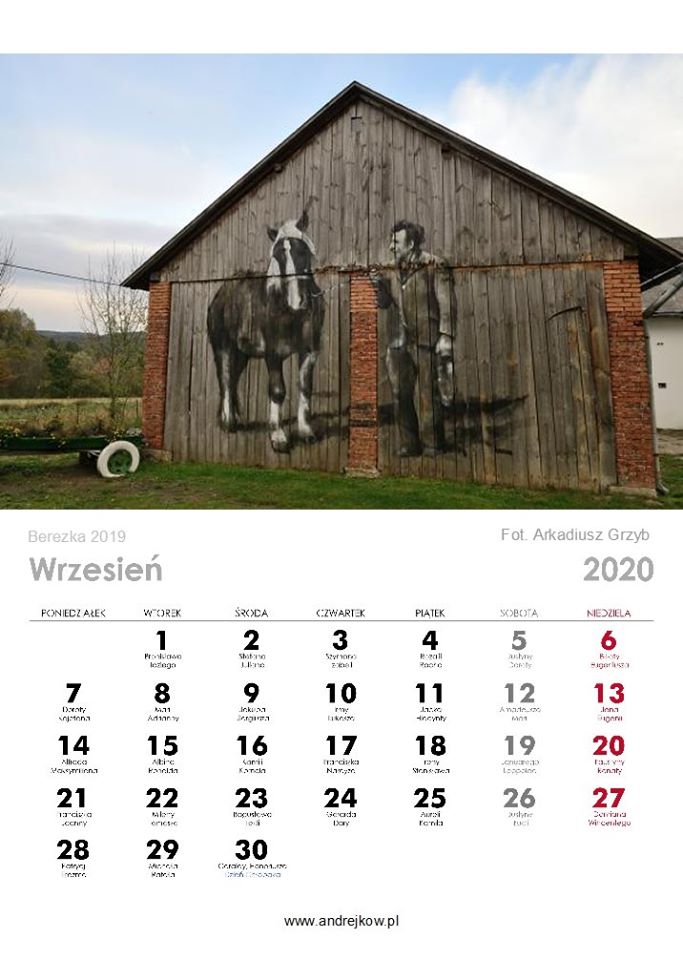 The historical relevance of Cichy Memoriał can not to be called into question with Andrejkow’s paintings often revealing curious stories and quirky historical chapters often unknown beyond the limited catchment area of the villages they appear in. In Krościenko, for instance, one mural of a refugee farmer named Janis Ciumas is a reminder of the rarely remembered Greek influx that this part of Poland received in the wake of the Greek Civil War. 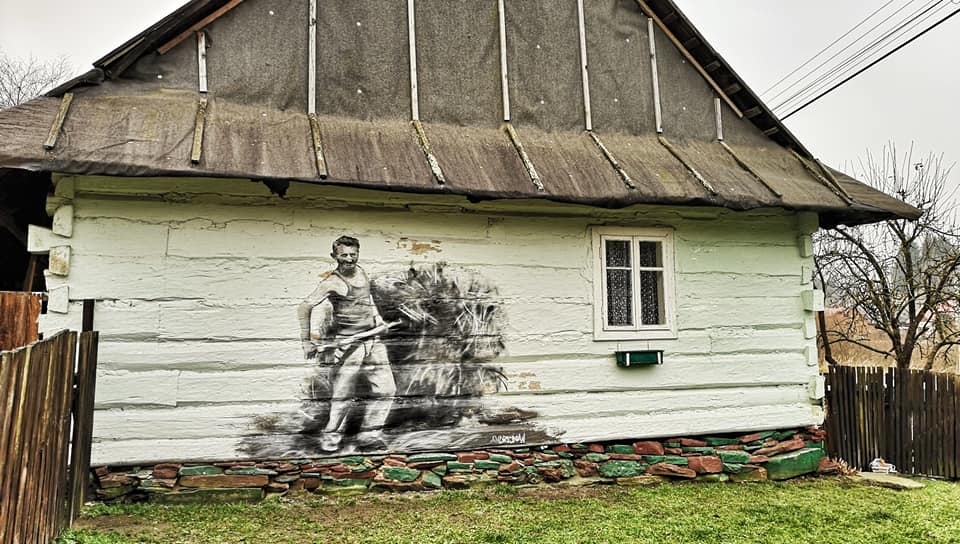 A mural of a refugee farmer named Janis Ciumas is a reminder of the rarely remembered Greek influx that this part of Poland.Arkadiusz Andrejkow/Facebook

Touching and timeless, neither are the works short on poignancy. As an example, one depicts a childhood photograph of a brother and sister sat side-by-side as they gingerly pose for the camera in the 1970s. The brother, Jacek, would later die in a lightning strike at the premature age of thirty-three. Looking at this innocent image of youth, one can’t help but feel profoundly moved at the thought of a life cut short by the cruel hand of destiny. 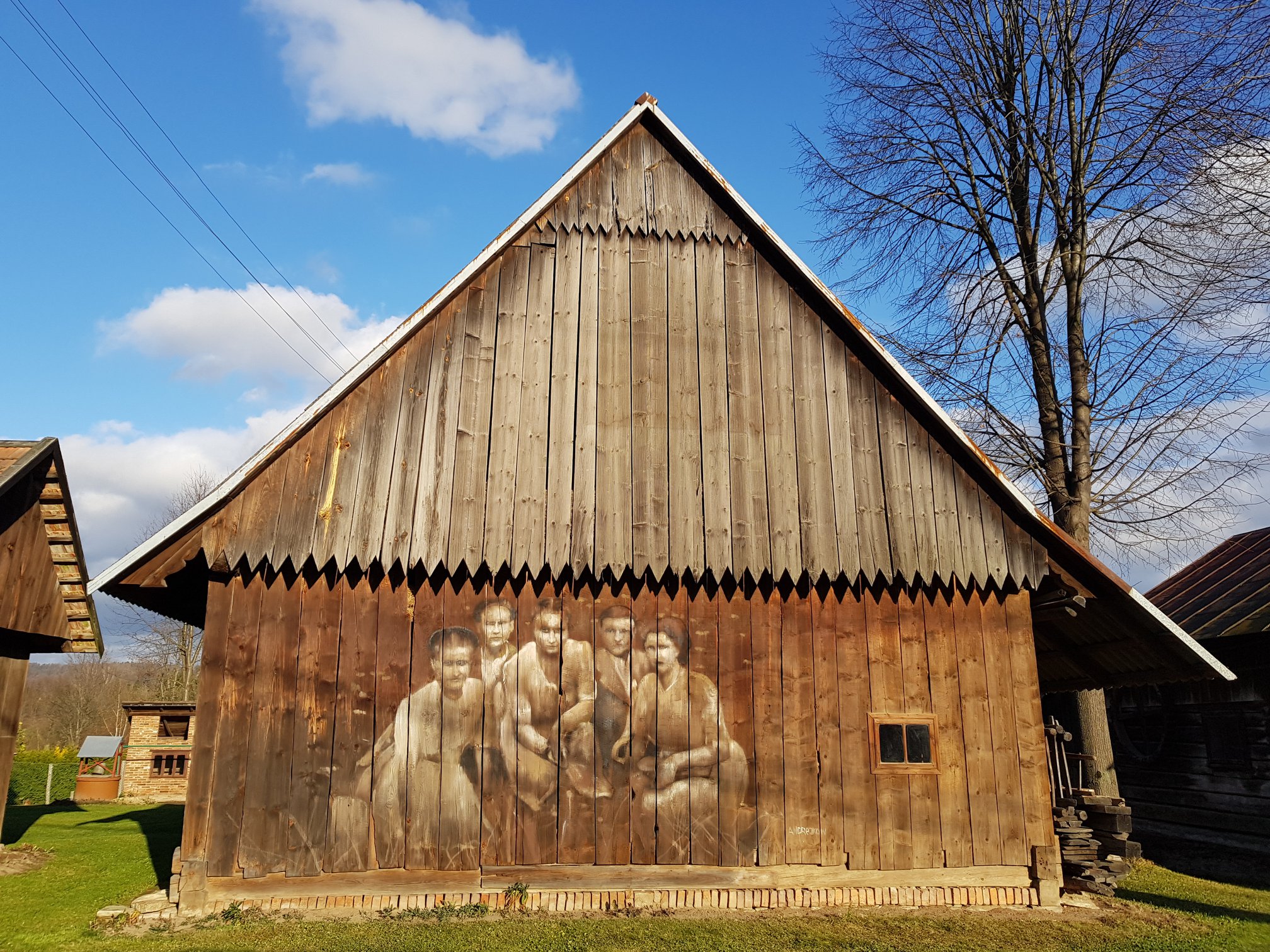 “Every photo I work from, and every barn that I paint on, has its own individual story,” he says.Arkadiusz Andrejkow/Facebook

For his part, Andrejkow stresses that his work should be interpreted in whichever way people wish. “I don’t impose my own theories on other people,” he says. “Those looking at art should interpret it in whichever way they see fit and by using their own life experiences and external stimuli.” 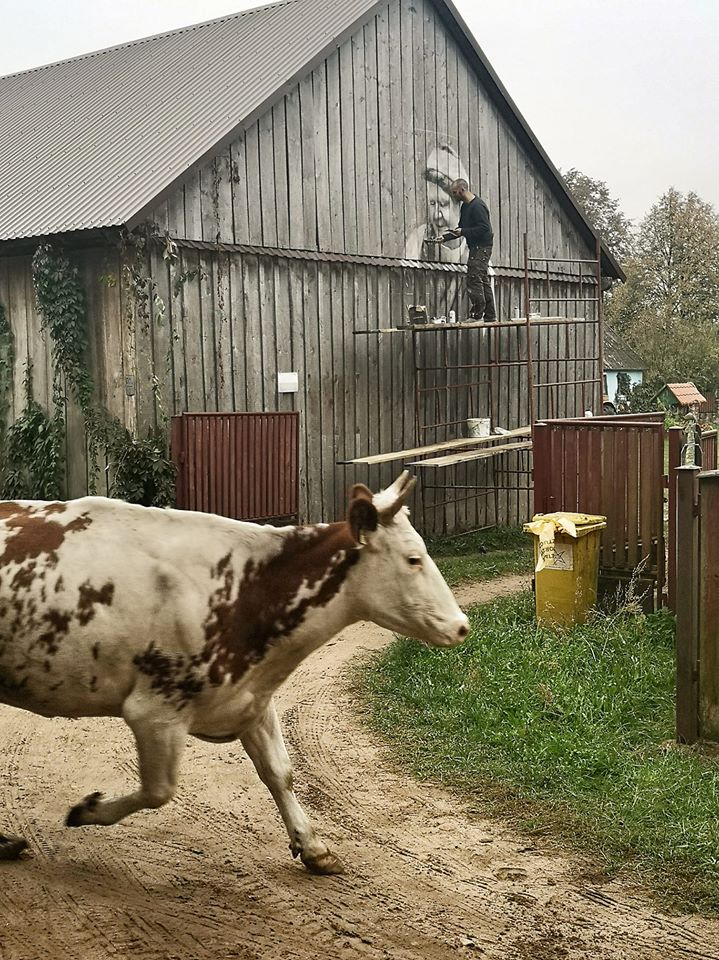 Fast going viral around the country, word has spread rapidly of Andrejkow’s art and the artist has now released a calendar featuring his images. But this is not the culmination of the project, rather just the beginning. 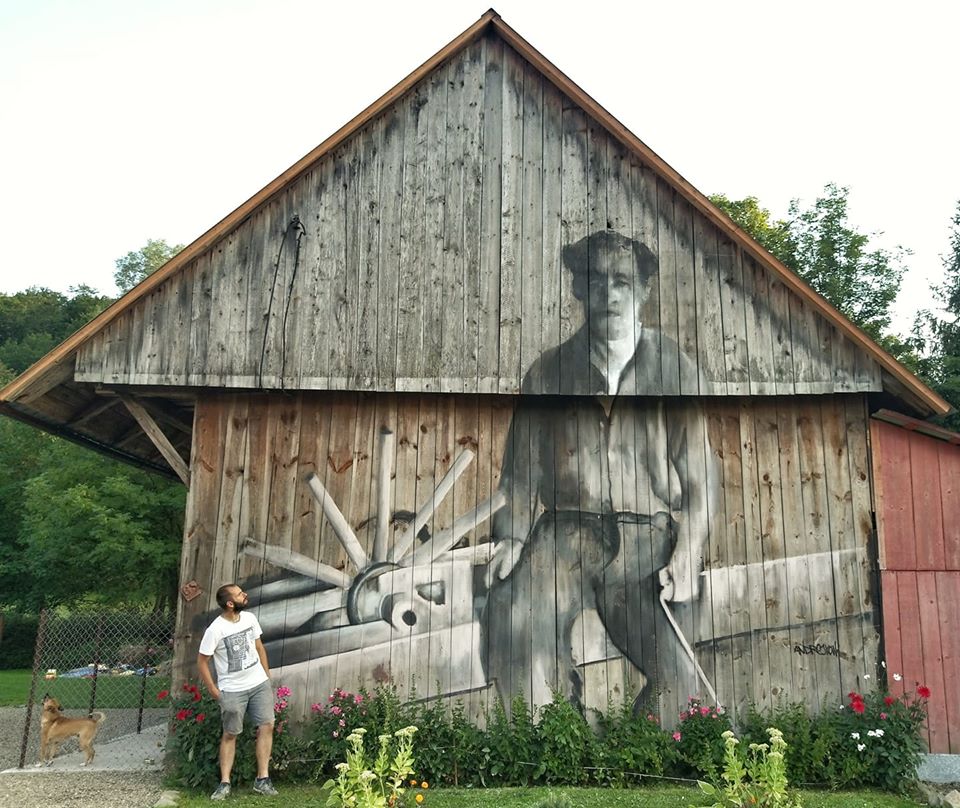 The characters I depict blend so seamlessly into the wood,” he says.Arkadiusz Andrejkow/Facebook

“I’m already actively checking the forecast to see when I can paint more outdoors,” he says, “and I’ve started to get offers from around the country – it’s quite possible that the project will find itself extended beyond Podkarpackie alone.” We would hope so. 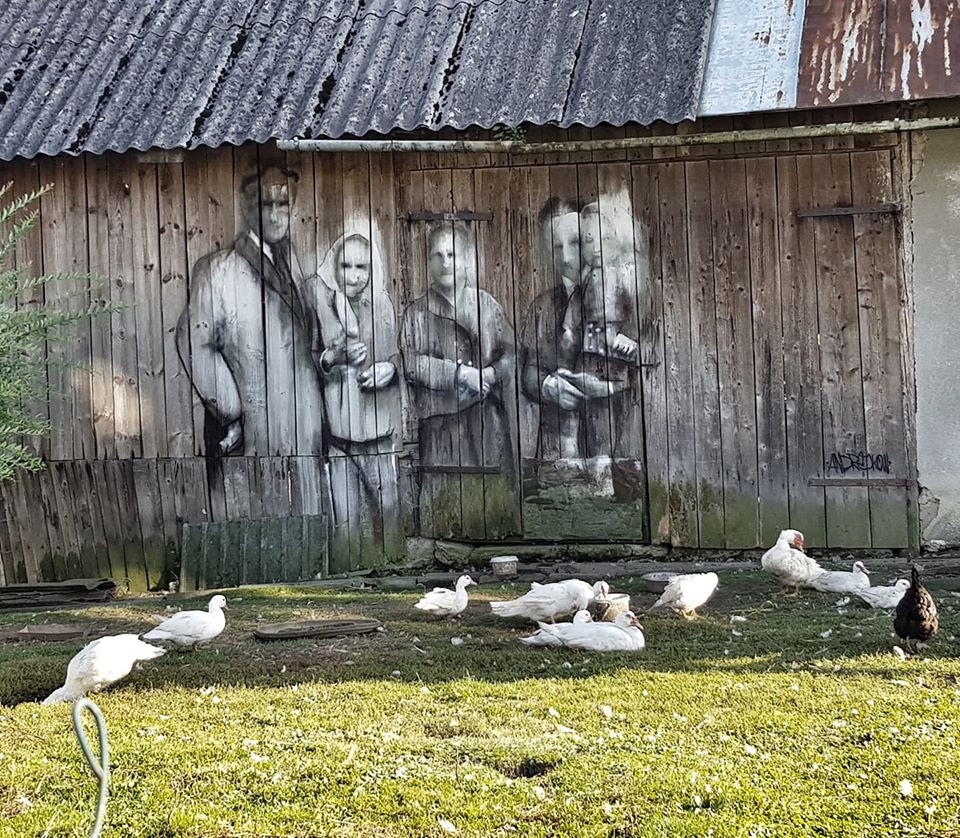 They’re ordinary people,” he says of his subjects, “but they worked tremendously hard and were the lifeblood and identity of their micro-community.”Arkadiusz Andrejkow/Facebook

For more on the artist, see andrejkow.pl or follow him on fb.com/andrejkowarkadiusz.

This article was first published in December 2019.