Archaeological digs are underway to excavate a giant medieval barge that carried goods down the Vistula in the 15th Century. Conservation will take 8 years before the vessel is put on display.

Workers stumbled across the barge 30 years ago when they were deepening a pond in an apple orchard and their tools struck a wooden construction. The orchard’s owner Katarzyna Łuczak-Jasińska wasted no time calling in a team of archaeologists.

What they discovered was a flat-bottomed barge built in 1481 typical of the kind used to transport goods along the Vistula in the 15th and 16th centuries. The discovery became a sensation, not only because it was so well-preserved, but also because it is one of the largest examples of these vessels, measuring 31 metres long, 7 metres wide and about 1.5 metres deep.

The barge was found near Czersk Castle in a pond that was likely to have been part of the Vistula before the river changed its course to flow further away towards the east. In fact, it was this change in the river’s course that caused the Dukes of Mazowsze to abandon Czersk Castle and move to Warsaw. 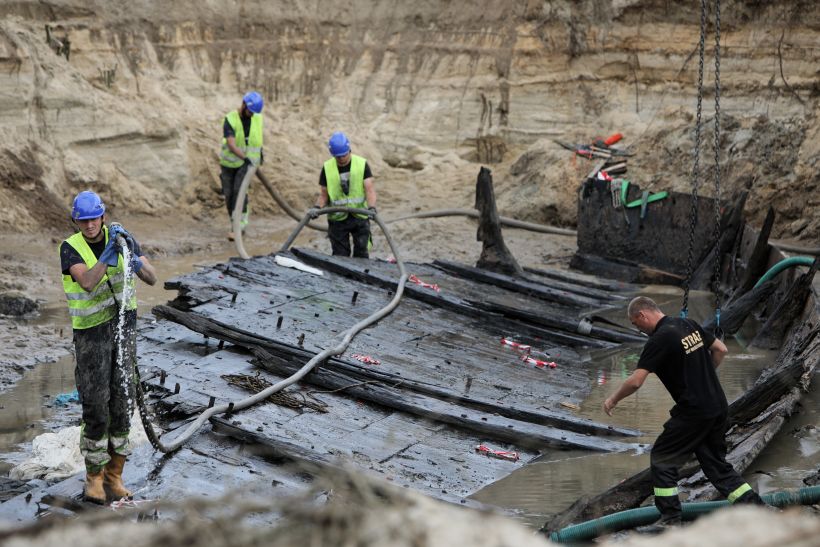 The flat-bottomed barge built in 1481 was typical of the kind used to transport goods along the Vistula in the 15th and 16th centuries.Leszek Szymański/PAP

Dr. Wojciech Brzeziński from the State Archaeological Museum underlines the importance of the find, saying that “the vessel sailed along the Vistula in the times of Christopher Columbus, but it is 9 metres longer than his ships”.

The oak barge would have had a cabin where a crew as large as 20 would have slept. The cargo hold was open, covered only with mats, and the vessel would have been powered by sail in good winds, or otherwise, by oar or even pulled by the crew.

Back in 2009 when extensive investigations were carried out, archaeologists were not able to dig out the barge because of the high cost of the operation and there was nowhere to store the 31-metre vessel. Thus, it was decided to bury the wreck again in its watery and sandy grave.

Now, however, a huge basin has been built for the barge in a branch of the State Archaeology Museum near Sochaczew in which the vessel’s wooden elements will be soaked in a special preserving solution. They will then be slowly dried in a special freeze-drying device. The iron nails and animal hair and tar sealing will also undergo preservation. The whole process will take seven to eight years and will cost around PLN 400,000 annually, which will be covered by the Mazowsze regional council.

The task is made much harder because the barge cannot be transported in one piece. Michał Grabowski from specialist company Archom explains: “We have to dig the barge out, clean it, fully document it and extract it piece by piece. It can’t be taken out whole or even in sections. Every element has to be marked and placed on a plan with its number so that the vessel can be put back together later like a puzzle”.

When all this work is completed, the archaeologists want to create a Vistula Shipping Museum in which the barge will be the central attraction.

Katarzyna Łuczak-Jasińska still hasn’t got her pond back, but she’s too busy serving everyone working at the site fresh apple juice from her orchard to worry about that. She’s even offered to accommodate any future museum on her land next to where the barge is being dug out.