Rally drivers, Michał Małuszyński and Krzysztof Hołowczyc, have developed a highly modified 911 to be unveiled at Britain’s Goodwood Festival of Speed

Two Polish drivers have developed a new Porsche based on a highly modified 911. Bespoke both inside and out, the Polish-made car – or “restomod” in the car world – combines a smooth, reliable drive with timeless style.

The car is the creation of Michał Małuszyński, an off-road rally driver, and Krzysztof Hołowczyc, the 1977 European Rally Champion. Together, the two set up HOMA RS, to create remodelled Porsche’s for the modern driver.

Their idea was to create a classic Porsche that can be driven with ease every day, as opposed to a clunky museum piece. They did this by tweaking a Porsche 911, the classic sports car first made in 1963, which ranked fifth in the international “Car of the Century” poll conducted in 1999.

Retaining the car’s dimensions, they added underpinnings from the Porsche 993, the internal designation for the version of the 911 manufactured from 1994 until 1998. These changes yield a lighter, more reliable car without altering the original’s appearance. Working with Michelin, the tyres were picked to suit the car. 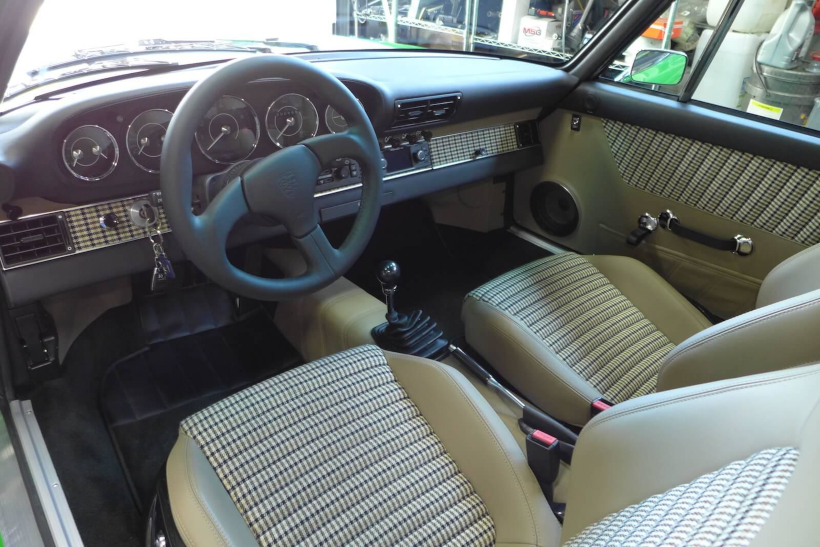 Customer not only choose the body colour but also the upholstery fabrics and leathers, as well as the stitching and individual details.
(Michał Małuszyński and Krzysztof Hołowczyc)

By combining a range of parts, and old and new technology, the car is what is known as a “restomod” — from “restored” and “modern” parts — in the car collector world. These differ from “survivors” –  cars left in their original condition. But unlike a restored car, a “restomod” does not feature all or mostly original factory parts. Instead, outdated parts are replaced with newer ones, reflecting the progress in automobile since the car were first made; in the case of the original 911, the 1960s.

Inside, customers can choose the upholstery and leather. Optional add-ons include air conditioning, a bespoke sound system and LED lighting. Each car takes months to build, with a remarkable attention to detail. For all its retro looks, it is made for today’s drivers – and today’s urban commutes.

The car will be revealed at Britain’s annual Goodwood Festival of Speed on July 12-15, which describes itself as “world's greatest celebration of motorsport and car culture”. As motor enthusiasts gather for the event’s 25th edition, Małuszynski and Hołowczyc’s revamped Porsche 911 is bound to steal some hearts.

Made in Warsaw! New Porsche ad produced in Warsaw released as luxury car sales pick up speed around the country

Polish HICP inflation up by 3.8 pct y/y in January - Eurostat