Aim For The Tsars: Stepping back in time in the village of Białowieża

Few regions in Poland evoke quite the same emotions as Białowieża; challenge a native on the subject, and they’ll likely wax lyrical about nature’s noble beasts and the wild, dark forests in which they’re found prowling.

But if Poles are proud of this area, then it’s for justifiable reason: spread over two countries, and spanning a total of 150,000 hectares, the Białowieża Reserve is globally recognized as home to not just one of the last surviving primeval forests in the world, but also the planet’s largest free-roaming herd of bison. 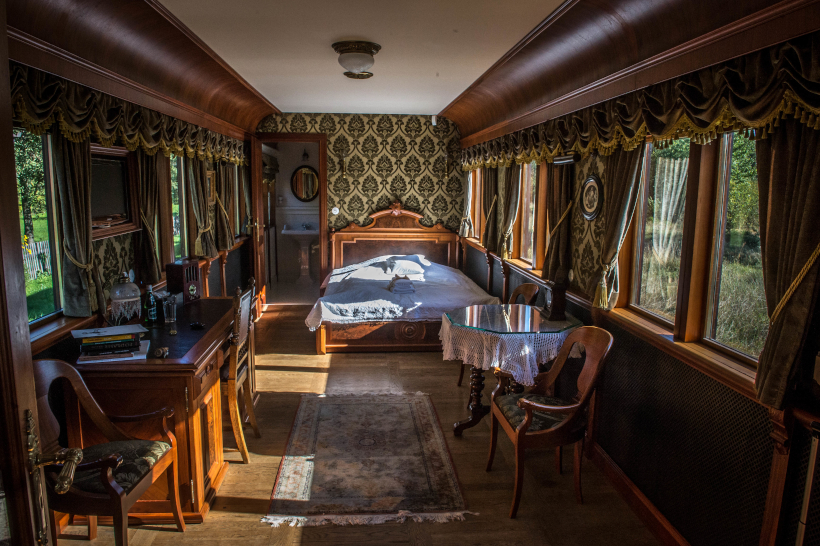 For the full experience, splash out on one of the vintage train carriages initially designed by Ferdinand Porsche.TFN

Ironically somewhat, significant credit for this can be apportioned to hunting. Once a private playpen for the rich and powerful, for centuries its status as a closed-off hunting ground allowed wildlife to flourish and prevented incursions by the modern world – in fact, as early as 1538, a decree signed by Zygmunt I made the poaching of bison a crime punishable by death. But even before this, Białowieża had been well secured under a protective monarchical wing. First coming to prominence in 1409, it was then that King Jagiełło organized a grand hunt to stockpile meat ahead of the Battle of Grunwald. So impressed was he by the wealth of his haul, the forest was marked off-limits to all but those granted special dispensation. 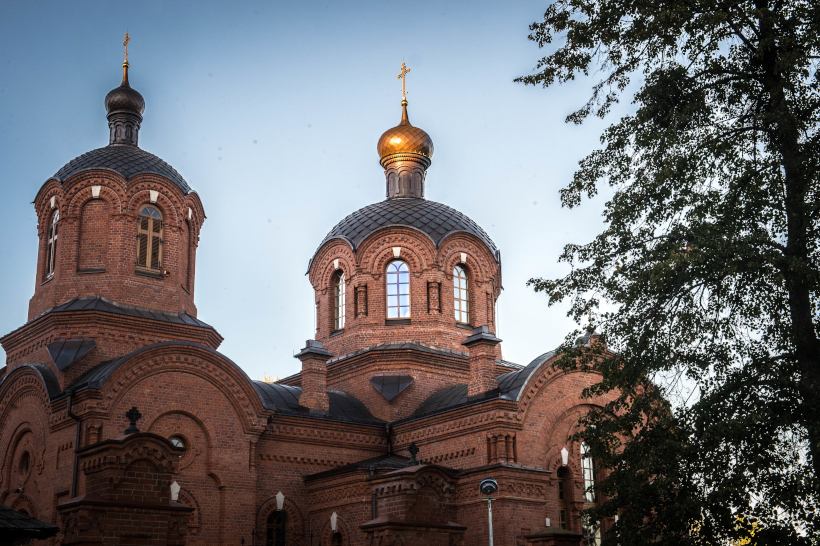 The onion-domed Church of St. Nicholas reminds people that this was once part of imperial Russia.TFN

Subsequent carve-ups of Poland did little to diminish Białowieża’s stature: Hermann Goering, for instance, foresaw it becoming the world’s biggest hunting ground with his insane plans including the reintroduction of prehistoric animals. However, it was due to the Tsars that the eponymous town at the centre of the Białowieża Reserve became quite what it is today.

Often overlooked amid the wider region’s greater glories, the village of Białowieża is one of those golden little nuggets that embody rural Poland. Populated by approximately two thousand people, it’s a place lined with century-old timber cottages painted in an array of cheerful colours. From them, thick plumes of chimney smoke add a unique rustic fragrance to the mist that settles in these chill days of autumn; silence reigns, occasionally interrupted by the clip clop clatter of a passing horse and cart. Generally speaking, this represents the peak of the action. 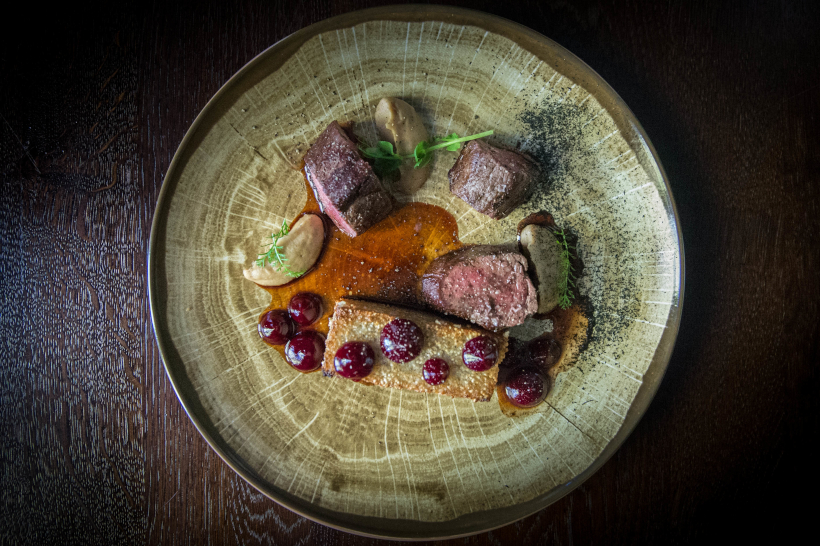 Carska’s menu features an abundance of local game bagged in the forest. TFN

Thought to have been first founded in 1426 when the aforementioned King Jagiełło had a lodge built to serve as his hiding place from the plague, the village slowly developed with the march of time. Even so, stop-start was the order of the day. Five hundred of the reserve’s 502 Polish foresters partook in the anti-Russian November Uprising of 1830-31, a move which left the forest briefly unprotected after the rebellion was put down. With these locals constituting the bulk of the village’s census list, their subsequent expulsion saw the settlement effectively cease to exist.

A comeback, though, was soon on the cards. Having regained favour among Russia’s royals, an ambitious project was launched to build a spectacular park and palace. Completed in 1894, the result was a lavish 120-room mansion set inside 45 hectares of manicured parkland designed to mimic ‘the English style’ prevalent at the time.

Set ablaze in 1944 by retreating Hungarian troops, what little remained of the palace was removed in the 1960s. The park, fortunately, survived, and so too numerous details that hint to its past: the royal chauffer’s personal quarters, the palace’s original gateway, a stable for the complex’s resident Cossack guards, and an 18th-century obelisk honouring a hunt led by King Augustus III. Most conspicuous of all, a Swiss-style manor that served as the residence for the Governor of Grodno. Predating the palace, it was in here that Tsar Alexander III stayed during his first trip in 1860. 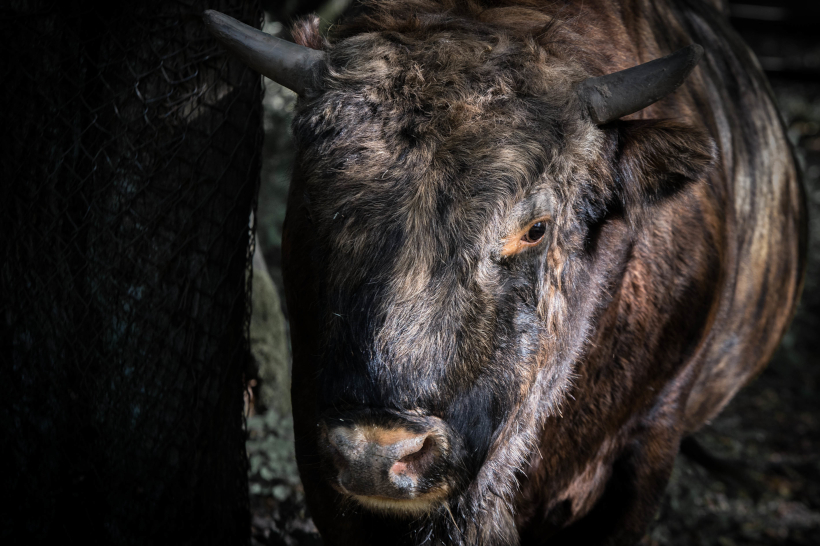 Once on the verge of extinction bison now flourish in the forests around Białowieża.TFN

Regardless, it is exiting the park that visitors find the most overt reminder that “this was Russia”. Plonked directly outside, it’s impossible to miss the onion domed Church of St. Nicholas that rises from the hill. Striking in its aesthetic, it’s everything you expect of an Orthodox house of worship: opulent and ostentatious with exuberant decorations adorning the interior.

Originally, the Tsars would have journeyed by train to Hajnówka before being ferried to Białowieża by horse-drawn carriage. Clearly, in the cocooned world of the royal family, this was considered a gruelling inconvenience. A fancy private station – now rebuilt to act as a tourist attraction – was added to despatch them to the foot of the palace, and so too a nearby goods terminal that could handle baggage and soak up the incoming traffic related to the royal visits. Named Białowieża Towarowa, the latter just about squeaked through the war only to fall into disrepair in the early years of post-communist Poland. 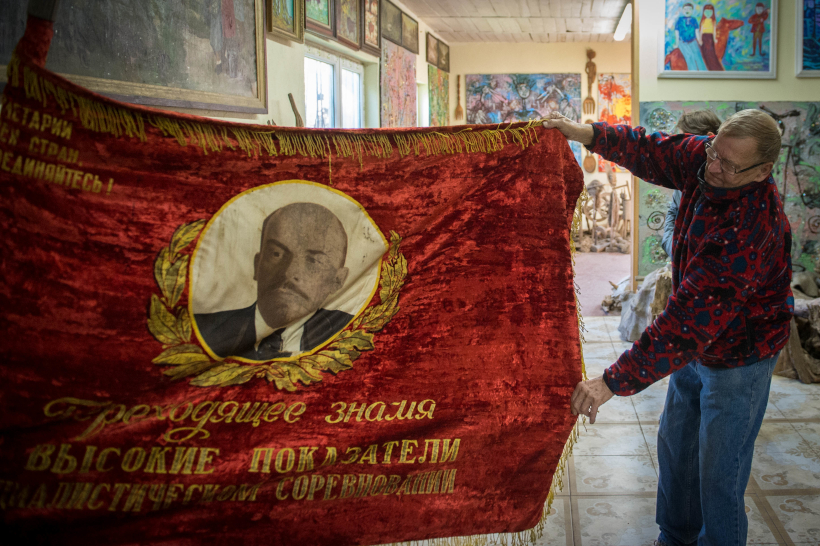 Roll out the banner. Lenin puts in an appearance at the Tamara Tarasiewiec Gallery.TFN

Seen as one of the last local vestiges of the Tsarist past, the care and vigilance of a former railway employee saved it from outright disintegration. Sensing the potential of the place, a benefactor was found at the start of the millennium, with the station finally relaunching in 2003 in a new guise as the Tsarist-themed Carska hotel and restaurant.

Extraordinary in every respect, dinner alone is a sumptuous affair conducted in a network of elegant rooms outfitted with the heads of hunted prey and chiming antiques. Specializing in game dishes and other local finds, the sense of ceremony is lent added weight by starch-collared servers and the overbearing presence of Tsar Nicholas II. Having visited five times in all, his trips to Białowieża are remembered via a comprehensive collection of portraits and pictures of the Romanov dynasty. Where you walk, their steady gaze follows: firm, unwavering and a little uncanny. 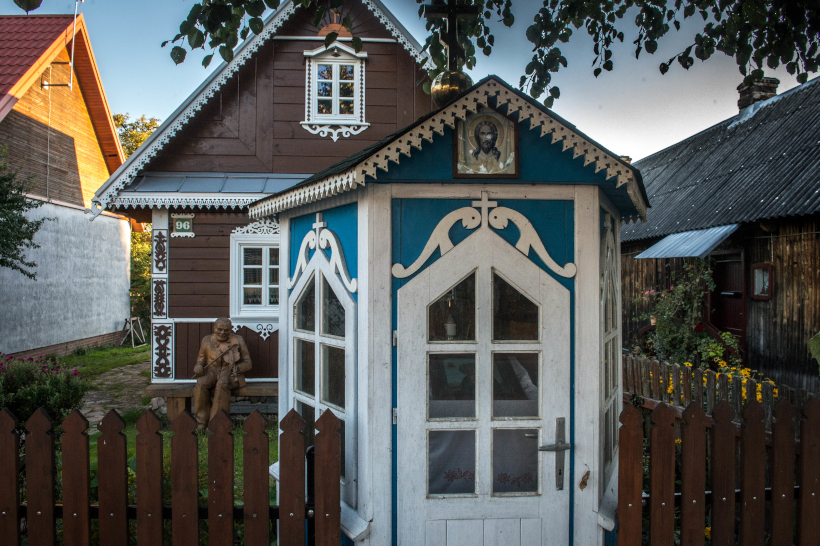 A roadside cottage adds a splash of colour to the village.TFN

Yet this is just a prelude to what comes next. For the full experience, splash out on one of the vintage train carriages initially designed by Ferdinand Porsche. Now rebooted as luxury accommodation, guests find themselves clambering aboard their own private saloon wagon before opening the door on decadent lodgings that are all plush, parquet flooring and flock-patterned wallpaper. Instantly, one feels the spirit of Tolstoy, Tchaikovsky, Zhivago and the Tsars. Stunning in its impact, the process of leaving becomes a leviathan challenge which guests must surmount: harking to a lost world of hunts and balls and sash-wearing princes, it’s a magical space that overwhelms all the senses.

Breaking the warm, nostalgic bubble is the knowledge of the brutality that surrounded the downfall of the Tsars and the vicious new order that followed in their wake. While largely skirted over in Białowieża, a faint reminder of this maelstrom can be found in the Tamara Tarasiewiec Gallery. Established by the locally-born painter of the same name, it’s a strong candidate for probably the most bizarre museum you’ll ever chance to visit. As if the artist’s own works weren’t quirky enough, discover hundreds of spooky dolls, heaps of bison bones and various bits and pieces relating to the region: from farming utensils down to 19th-century rat traps that would leave unlucky rodents looking like a thick raspberry jam. And amid that all, a medley of Bolshevik banners and Socialist paintings recalling the revolution that engulfed Imperial Russia in a whirl of bloodshed. Even with this, here, in pastoral Białowieża, it is the romance of the years preceding that are the overriding memory.