An athlete from the Dolny Śląsk region is celebrating after completing a triathlon indoors and, in the process, smashing an Ironman world record set just weeks previously by German superstar Jan Frodeno at his home in Girona.

Inspired by Frodeno’s success (timed at eight-hours, 33-minutes and 39-seconds), Robert Wilkowiecki’s attempt at the indoor record came about as the athlete sought to find motivation during the lockdown period. With his life torn apart by the pandemic, the challenge was seen as the perfect riposte to the wider situation. 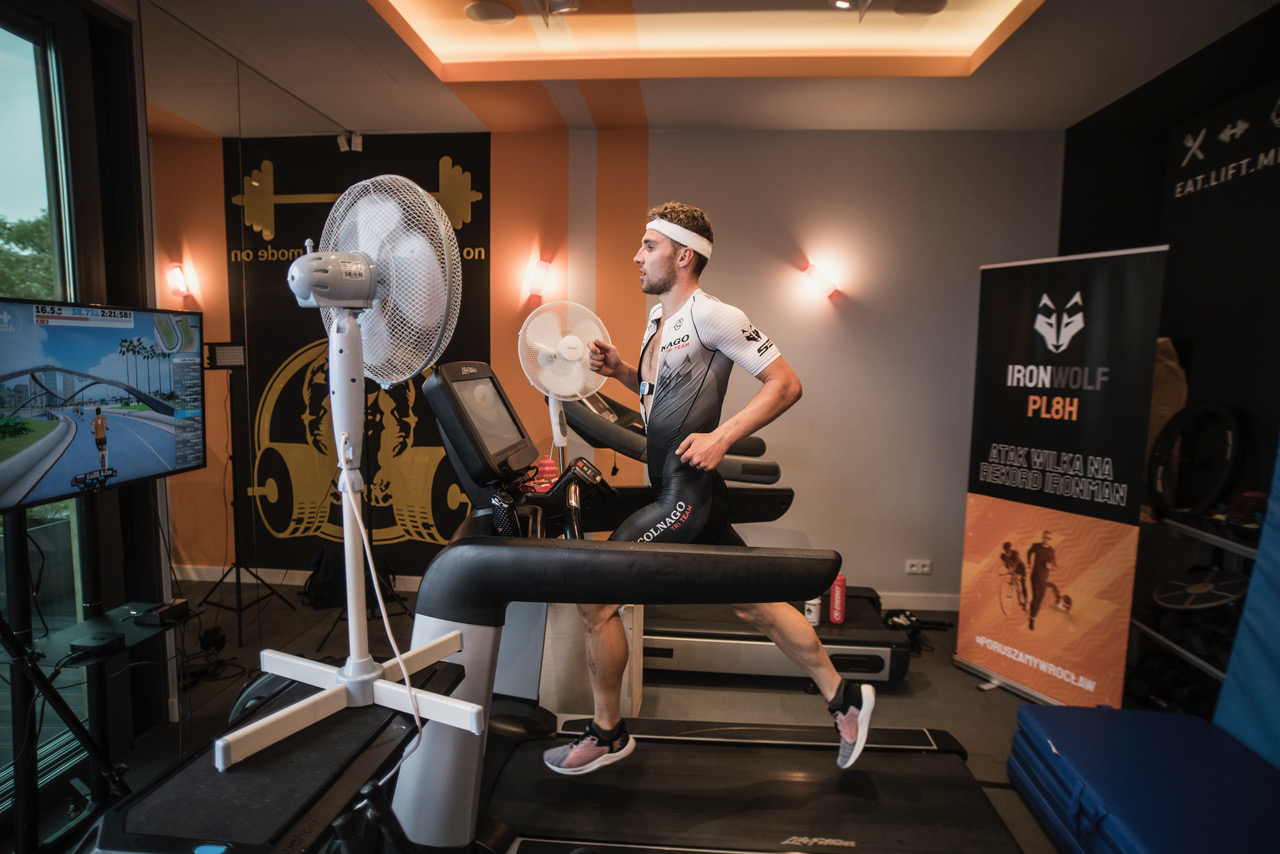 “I was looking for a purpose,” he tells TFN. “Earlier in the year my fiancée and I moved to Spain but global events prompted our return to Poland. I found myself questioning if I’d compete again this season.

“Coming back in March we had to complete two-weeks of home quarantine and it was during that time my grandfather died – I couldn’t even go to the funeral. I felt powerless. It’s great being able to follow my dreams, but during times like that you start thinking how self-centred the life of a sportsman can be. You realize how much it effects the lives of everyone around you.”

Having talked it through with his family, Wilkowiecki opted to rebound even stronger and from this came the idea of setting his own Ironman record. 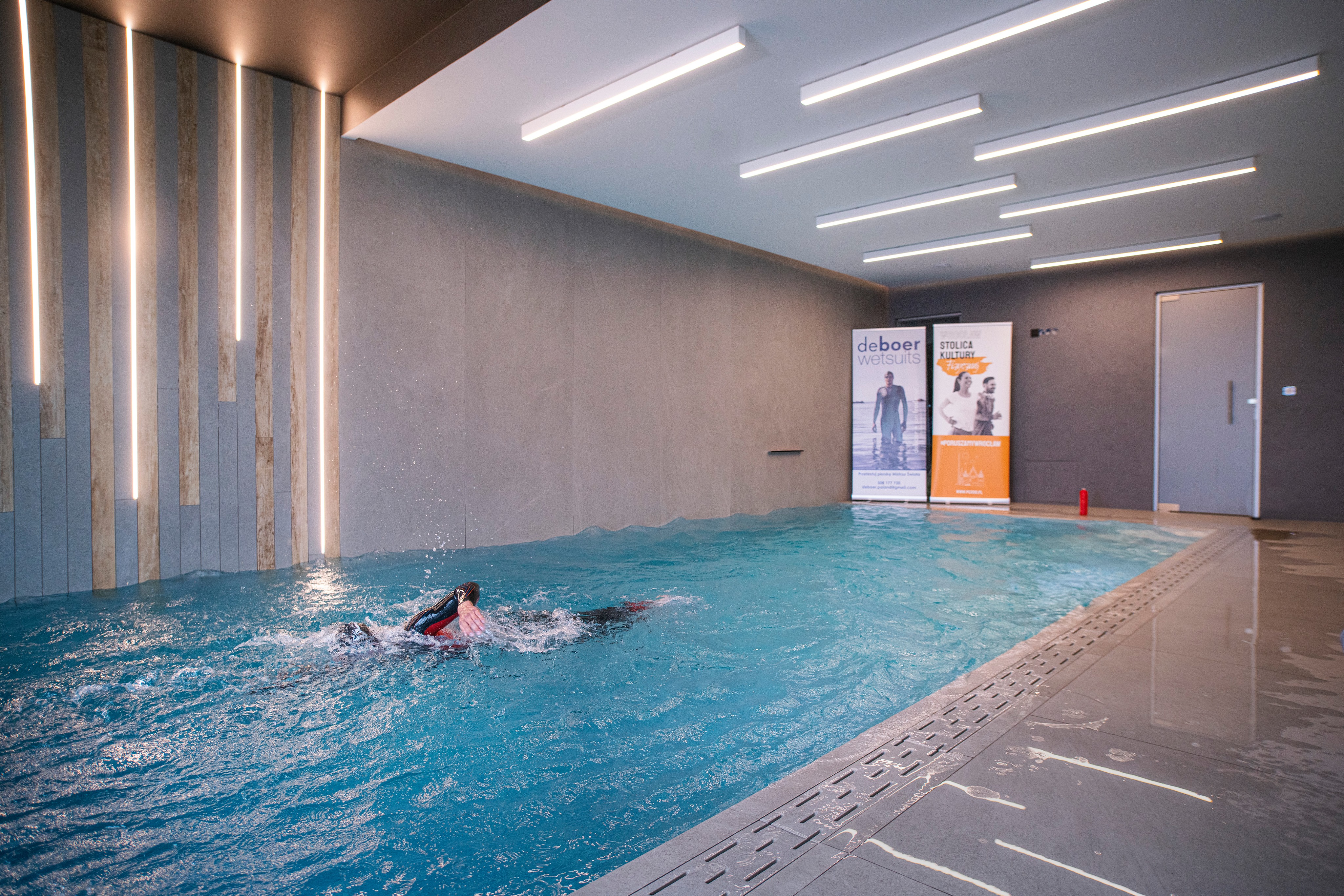 “Admittedly Jan took it easy when he did his indoor triathlon and was speaking to fans whilst doing it,” says Wilkowiecki. “So for me the real target wasn’t so much about beating his time but becoming the first Pole to complete a triathlon in under eight hours. There’s long been talk about who would do it first, so my team and myself thought we could set that as our principal aim to try and get the media’s attention.”

Despite beginning quite spontaneously (“almost as a joke,” says Wilkowiecki) the idea soon gained traction.

“We had just five weeks to prepare,” he says, “but my team and management worked hard to make it happen.” 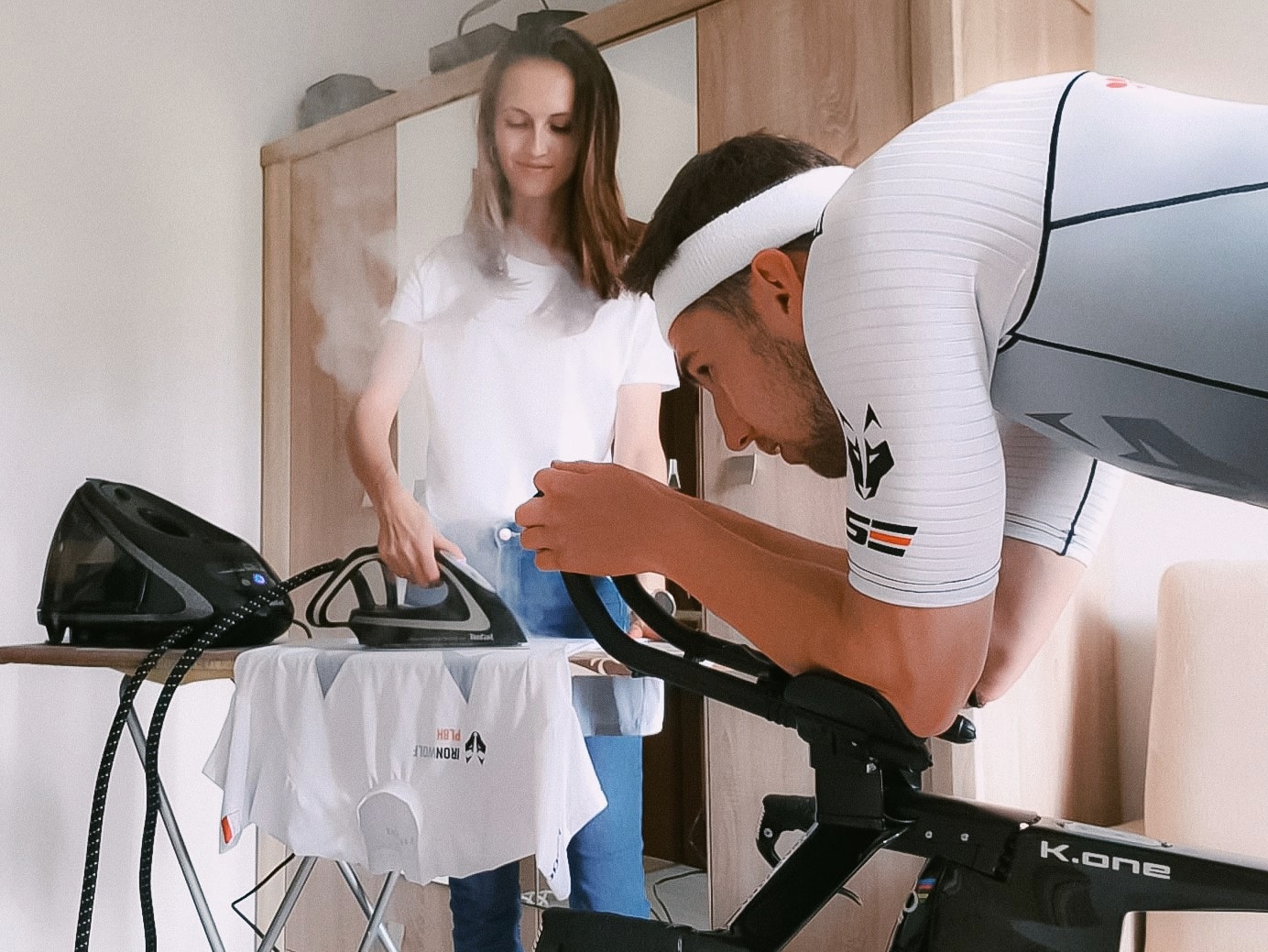 During training life still carries on with his fiancé doing the ironing. Behind every Ironman there’s an Ironwoman, says Wilkowiecki.Robert WILKU Wilkowiecki/Facebook

Crucial was the role of one of his key sponsors, Piotr Baran of PCG, who opened his house to allow Wilkowiecki to both train and also have a crack at the record.

“He was keen to develop the story,” says Wilkowiecki, “and nothing was too much trouble – two days before the event he had to move his family out so that he could host it so I’m really grateful that he allowed for this opportunity to happen.” 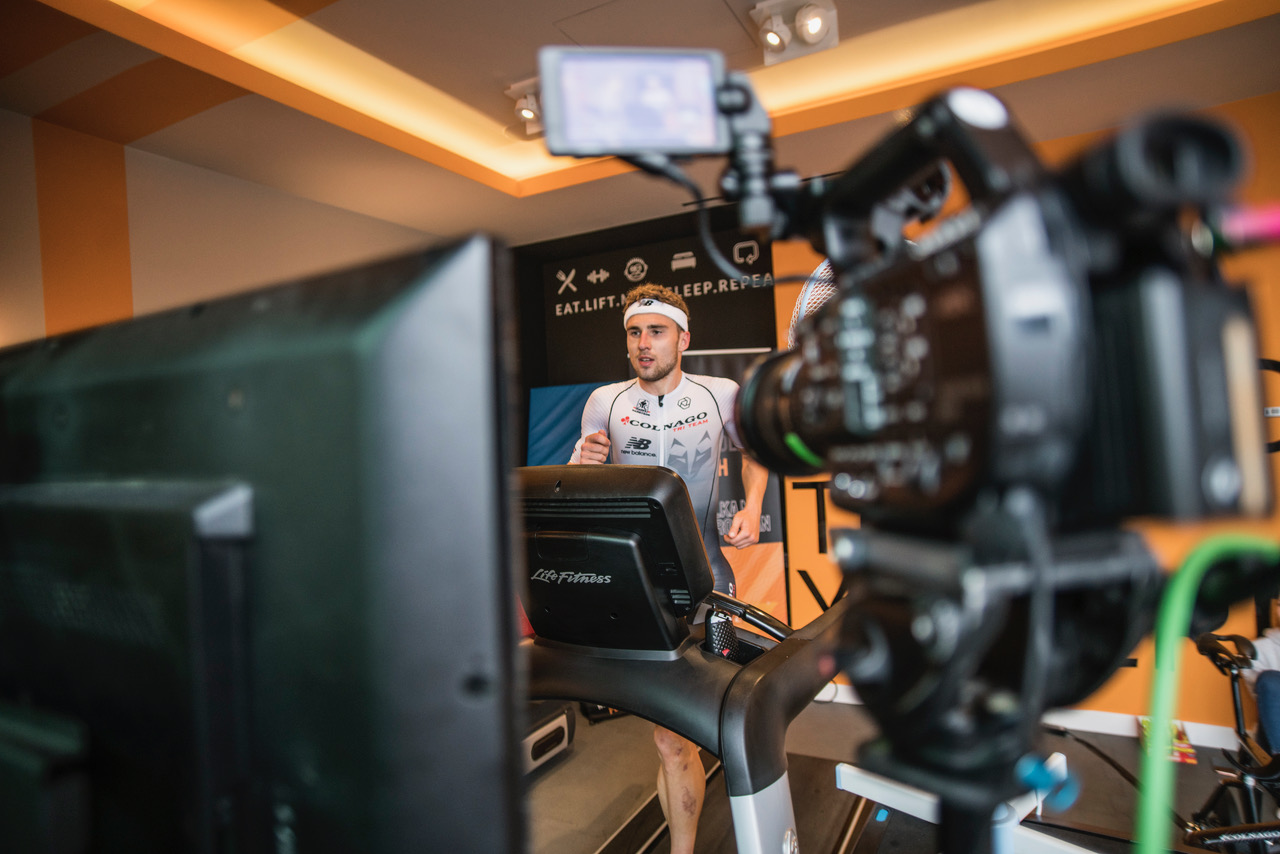 With almost 50,000 people tuning in throughout the course of the day, Wilkowiecki managed to raise 35,000 złoty for charity.Michał Kuczyński

Preparations were by no means straight forward.

“From the start we knew that it shouldn’t just be about me,” he says, “as even I’d find watching one guy doing a triathlon a little bit boring!”

Instead, a raft of sports stars were also corralled into attending to give the live stream additional appeal. With almost 50,000 people tuning in throughout the course of the day, the plan worked – a point reflected by the 35,000 złotys subsequently raised for charity. 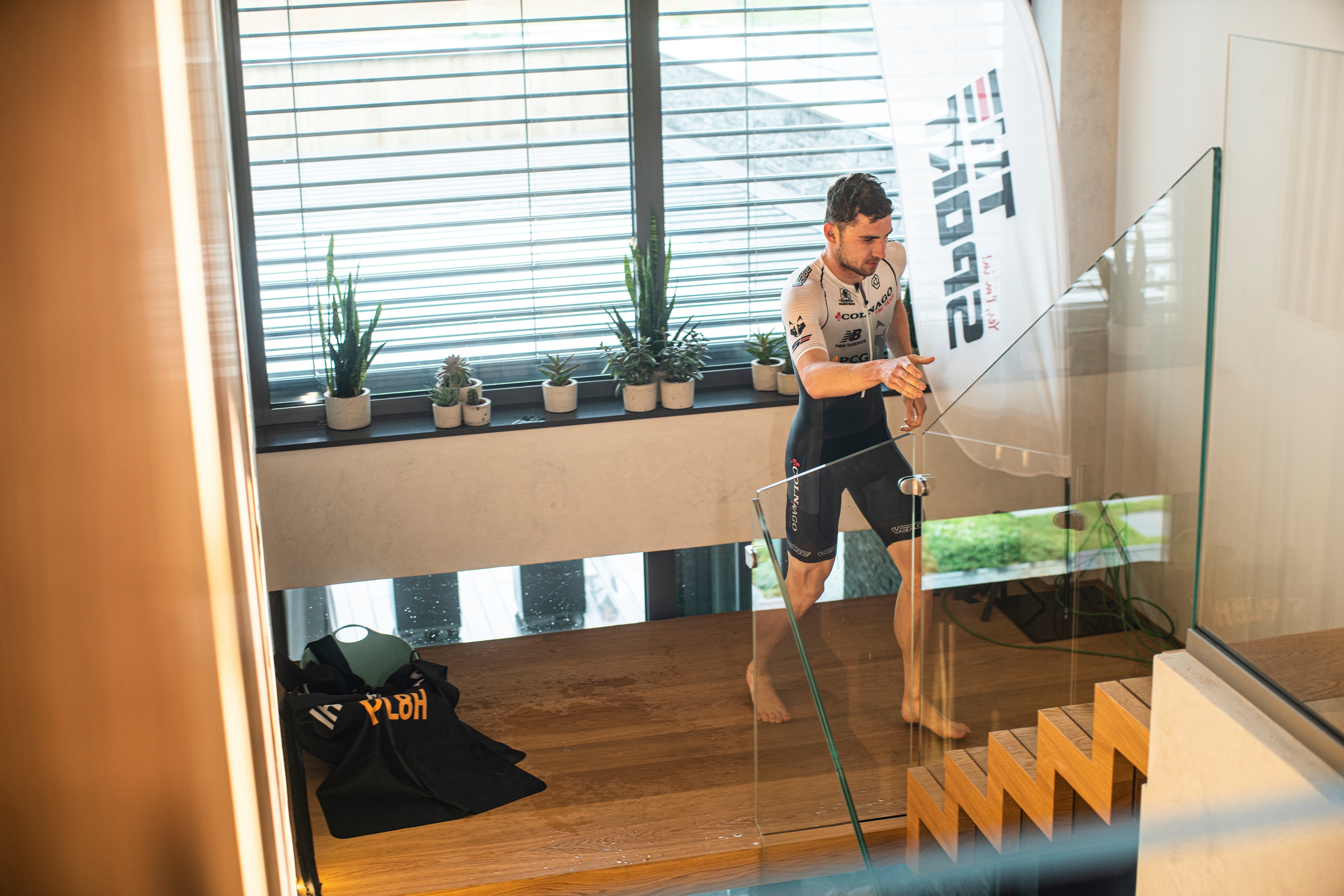 With just five weeks to prepare sponsor Piotr Baran of PCG opened his house to allow Wilkowiecki to both train and also have a crack at the record.Michał Kuczyński

“It was never about satisfying my ego,” says Wilkowiecki, “I wanted to do something good and to give a little bit back to the community as well.”

Choosing to support FizjoTRIterapia, a foundation created by his friend Łukasz Malaczewski, the windfall will go towards enabling disabled children to enjoy the thrill of partaking in sporting activities.

Completing his Ironman triathlon in 7-hours, 35-minutes and 14-seconds (itself an Ironman record, though one that will not be officially recognized given the conditions), Wilkowiecki’s team tried to match real world conditions as closely as possible by setting the indoor pool with a counter-current and carefully choosing the correct programs on both the treadmill and exercise bike. 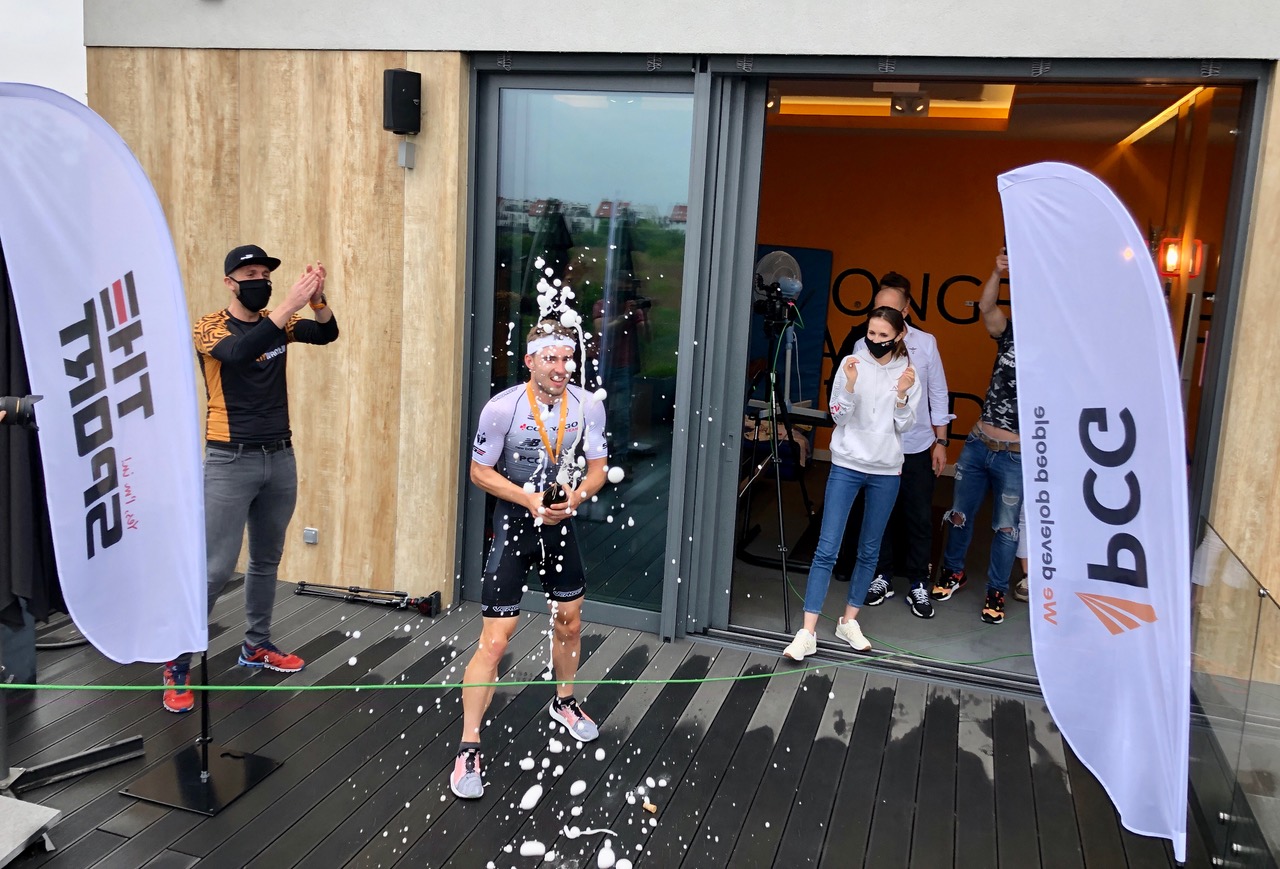 Wilkowiecki not only smashed the Ironman world record set just weeks earlier by German superstar Jan Frodeno, but has also become the first Pole to complete a triathlon in under eight hours.Michał Kuczyński

“Of course it wasn’t the same as a ‘real’ event,” says Wilkowiecki, “and it’s impossible to say how my results would translate in terms of a legitimate competition. Some things were harder, for instance cycling: I was pedalling constantly and didn’t have the luxury of small second breaks.

“But running and swimming were easier as I didn’t have to jockey for position against opponents nor make turns and suchlike. On top of that, sustenance was available whenever I needed.”

Despite that, Wilkowiecki’s achievements have not been underestimated by the sporting world. 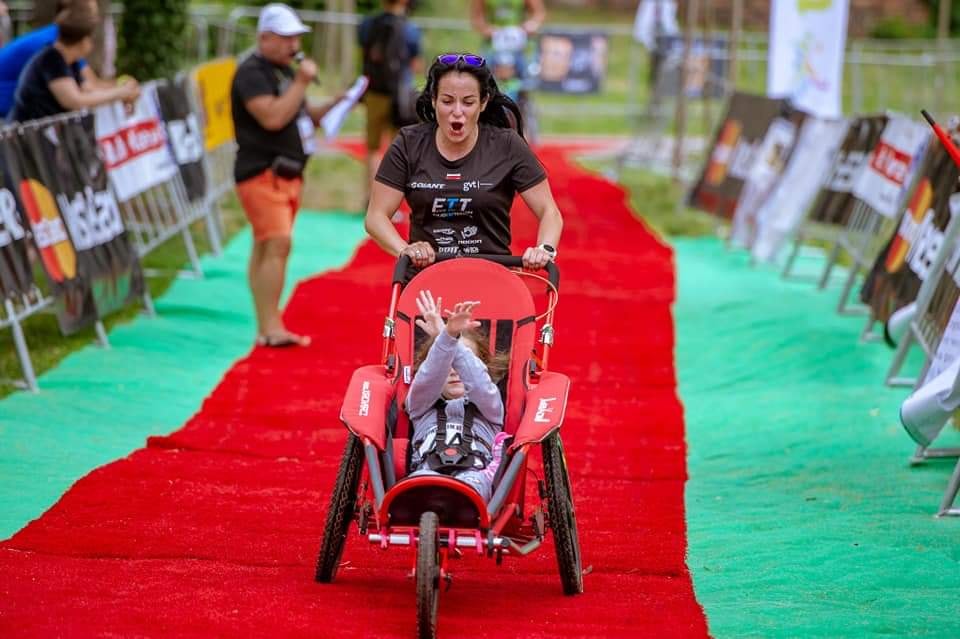 The money raised will go to FizjoTRIterapia, a foundation created by his friend Łukasz Malaczewski, and will go towards enabling disabled children to enjoy the thrill of partaking in sporting activities.Robert WILKU Wilkowiecki/Facebook

“The numbers don’t lie,” he says, “and on a personal level I’m really happy to see the potential of my body – it was a great indicator of the progress I’ve made as well as a brilliant boost for my own self-confidence. Mentally it was strange, but while I can’t imagine trying this again it was fantastic to do so.”

Choosing to celebrate quietly with his family (“it was also my dad’s birthday,” he says, “so it was a really nice family evening!”), Wilkowiecki is now focusing on the future.

“We don’t know exactly when the season will start,” he says, “but it’s clear that things are now moving in a more positive direction. All I can do is continue to prepare myself in the best way possible and strive to be the best athlete I can be.” 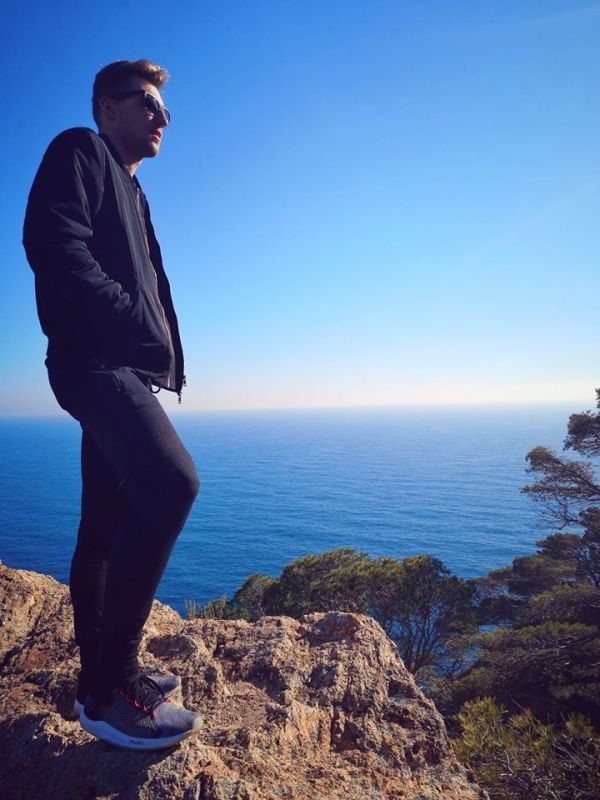 Upon breaking the world record and raising the money for charity, Wilkowiecki told TFN:L “It was never about satisfying my ego. I wanted to do something good and to give a little bit back to the community as well.”Robert WILKU Wilkowiecki/Facebook

Having fallen in love with triathlon almost accidentally two years after he finished swimming professionally, for Wilkowiecki this quest for personal betterment has been one of his fundamental driving forces.

“It’s difficult to explain,” he says, “but it’s not just the competitive element that drives me, it’s the whole Ironman lifestyle: being close to nature for most of the day whilst pushing yourself to the very limit.

State of epidemic threat may be lifted in January says PM