Soon after the Red Army arrived in Auschwitz in January 1945, the entire site of Auschwitz I and Auschwitz II-Birkenau was turned into a memorial museum, which ever since has promoted the slogan ‘Never Again’.

However, this was an imperative that the Soviet authorities chose not to apply to themselves. Within weeks of the camp’s liberation, thousands of Poles were again behind barbed wire at the former death camp. This time, instead of Hände hoch!, the prisoners heard Ruki vverh!.

In early 1945, the NKVD created three camps. The first, which they called Lagier 22, was in the main camp, Auschwitz I, and was intended mainly for German POWs before they were sent to Siberia or elsewhere.

The second, Lagier 78, was in Auschwitz II-Birkenau and held many civilians, including Poles, mainly Silesians and from the Opole region. The prisoners worked on the dismantling of the huge IG Farben chemical plant and sending is fixtures and fitting to the Soviet Union.

The camp with the worst conditions, though, was situated adjacent to Auschwitz I. It was set up by the NKVD but soon handed over to the feared Public Security Office, the Polish secret police, which had been installed by the Soviets to help them cloak post-war Poland in a blanket of communism.

The camp was set up on the site of what had been the Gemeinschaftslager, a camp that pooled forced labourers for work in nearby German enterprises, such as Siemens. 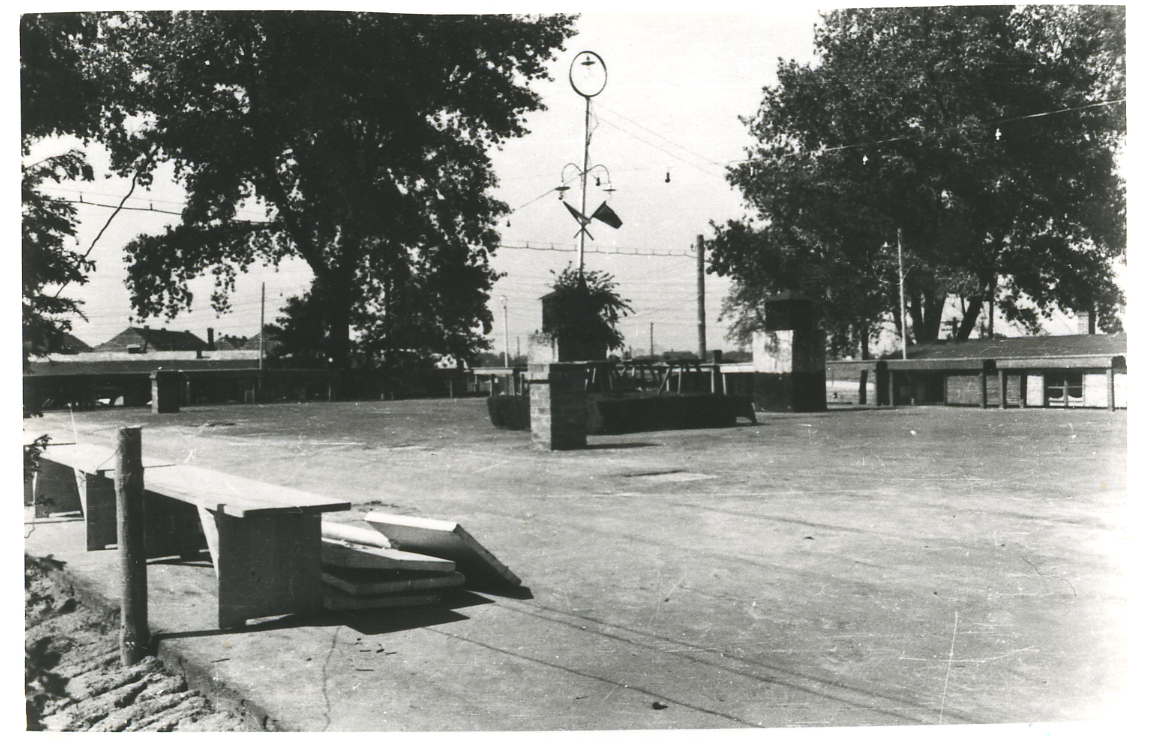 This photograph taken at Auschwitz in May 1945 shows preparations for a party for NKVD officers. Wooden benches can be seen for those taking a break from the fun. Lights to create the right atmosphere have been strung overhead.Stanisław Łuczko

All the prisoners were Silesians, whom the authorities for various reasons regarded as enemies of the people, collaborators or traitors during the war.

The camp contained five barracks, two women's, two men's and one hospital barrack. The prisoners of this camp worked alongside German POWs dismantling equipment at the IG Farben chemical plant.

Few details are known about the camp. Holocaust researcher Iga Bunalska from the Auschwitz Study Group told TFN: “When the Soviets handed over these sites to the new Auschwitz museum they took all the documentation with them and it is impossible to get access now.”

However, testimonies from those who suffered in the camp remain. Many ended up in the camp because they were denounced by a neighbour, often groundlessly. The motive was greed.

Józef Jancza told of how his father was arrested and later died: “The motive for my father's murder was robbery. Immediately after his arrest, our neighbour took over our farm. It was similar for all the farmers from our village. In 1945, one denunciation, one false accusation, was enough to take over other people's property. It was a temptation that many could not resist.”

Marta Nycz came from a region of Silesia that was mixed German and Polish. During the war she was forced to join a Nazi organisation for girls, for which she was arrested, beaten and tortured by the security police after the war. 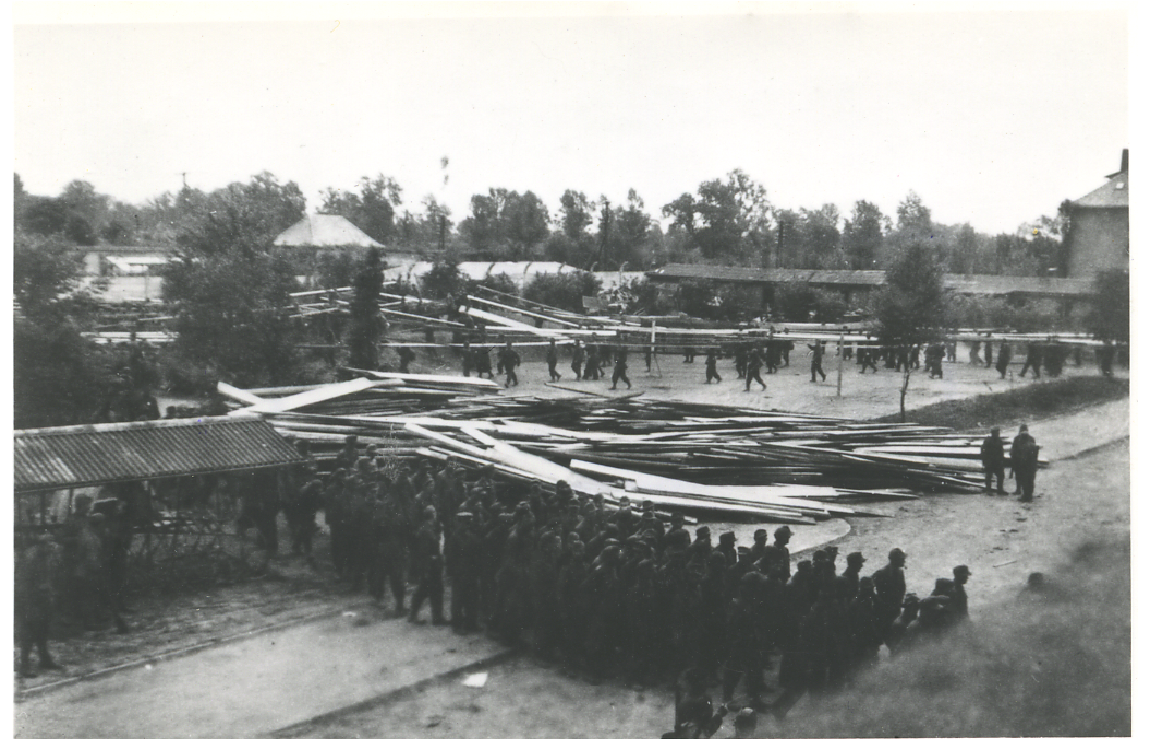 The NKVD created three camps within Auschwitz, the of which held many civilians, including Poles, mainly Silesians and from the Opole region. The prisoners worked on the dismantling of the huge IG Farben chemical plant and sending is fixtures and fitting to the Soviet Union.Stanisław Łuczko

She described the post-Auschwitz camp as follows: “It was a normal camp. Sentries on corners, wires, but not under high voltage. Water poured from the pipes under the ceiling. We had nothing to cover ourselves with, no blankets. The mattresses were clogged with lice and bugs.”

“It was hell. There was nothing to eat. They fed us cabbage leaves and bran. We got one slice of bread in the afternoon when we came from work. It was so thin that if you could see through it under the light,” she recalled.

Nycz remembered one man who struggling when returning from working all day angered a guard called Bajdys: “Józef Dyczek was a bit slow. He was tired, older and had a big hump on his back. Bajdys was getting more and more angry. Finally, he hit him with a rifle. Józef, stunned, fell to the ground. The madman, foaming with rage, jumped on Józef and stood on his chest. I heard a dry crack as his breastbone broke and a silent ‘Jesus’ as he died. He crushed this poor man to death like a cockroach.”

Many died from typhus, which ravaged the exhausted and hungry prisoners. The bodies were thrown into pits nearby Sola river, where the ashes of gas chamber victims had been previously dumped.

The camp was closed in March 1946, although many prisoners had to complete their sentences in camps in other cities.

In the two other NKVD camps, although there were mostly German POWs, there also were many Polish citizens. 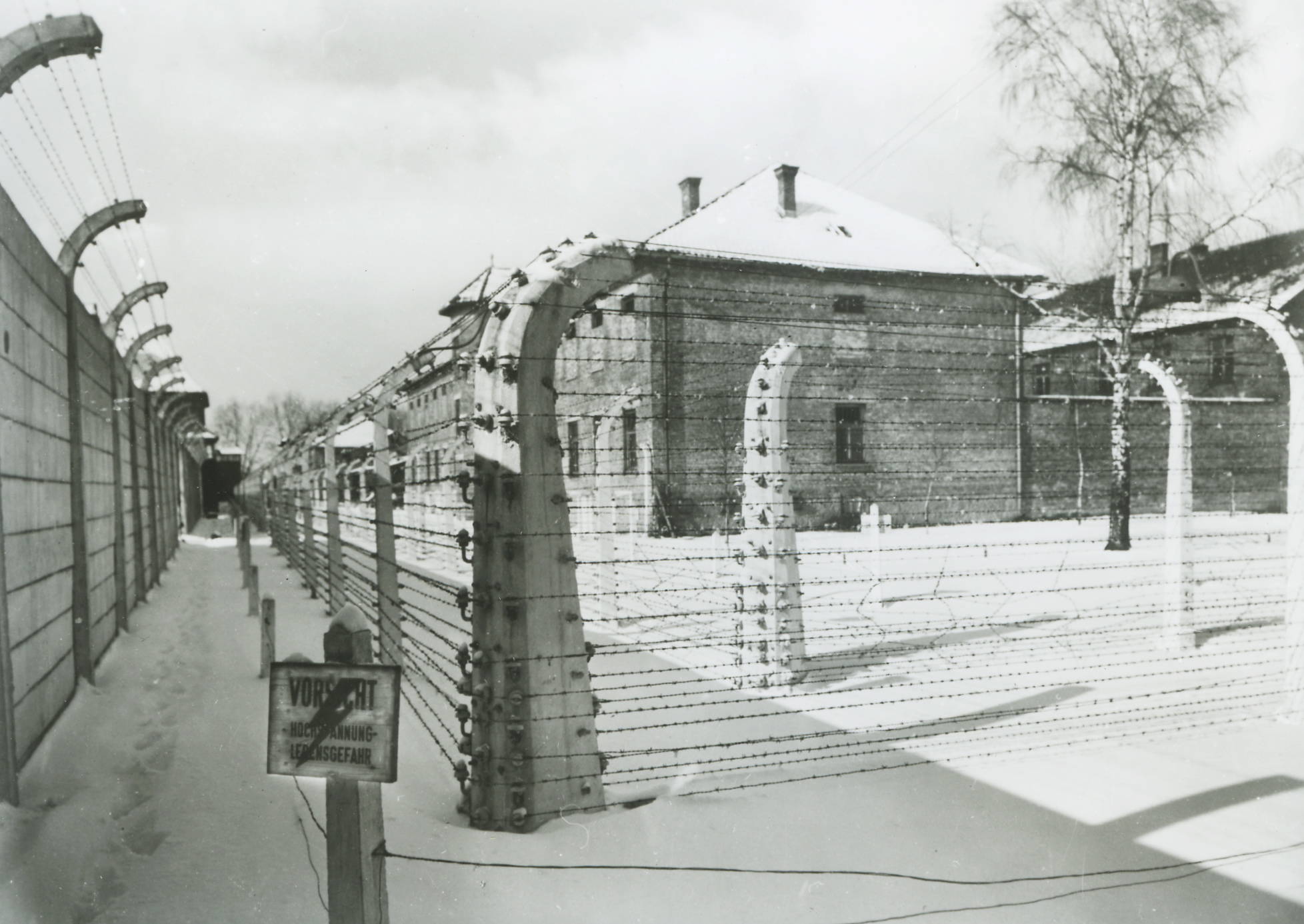 The camp where over a million people were killed was liberated by the Red Army. STANISLAW MUCHA / www.auschwitz.org

Oświęcim lay in a region of mixed nationalities, inhabited both by Poles, Germans and Silesians, who spoke both Polish and German.

During the war, these Silesians were either automatically placed on the Deutsche Volksliste by the Third Reich, which treated them as Germans. Sometimes, these people signed the list voluntarily to save their lives as not doing so often meant heading straight to a concentration camp.

Prisoners were forced to work in primitive conditions, which caused many injuries and even death. The guards also harassed detainees at every turn.

A female prisoner recalled: “We had to clean toilets that were terribly contaminated with human faeces. We were ordered to clean them with our bare hands. At every step, they wanted to show us that we were nothing now. They threatened us that if we didn’t do our jobs properly they would send us to Siberia.”

Shockingly, some in the camps were former Auschwitz prisoners and were still wearing their striped prison uniforms when they arrived back in the camp.

The commandant of the camp was Colonel Masłobojew, who organised dance parties on the roof of the crematorium in Auschwitz I. 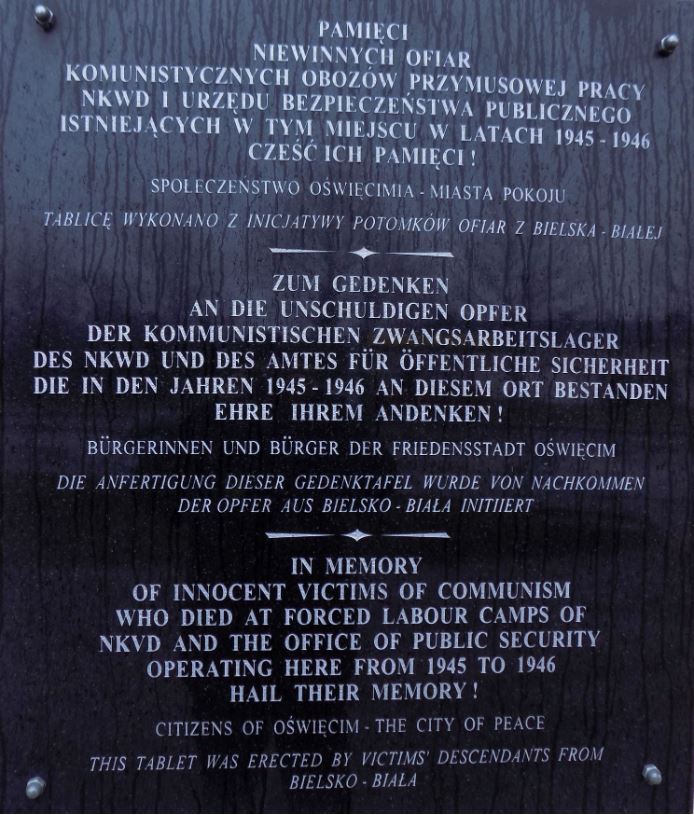 A plaque on one of the buildings used by the NKVD reads:  “In memory of the innocent victims of the communist forced labour camps of the NKVD and the Public Security Office existing here between 1945 and 1946.”Andrzej Cyra

A photograph taken in May 1945 shows preparations for one of the parties. Wooden benches can be seen for those taking a break from the fun. Lights to create the right atmosphere have been strung overhead.

Another example of how the site of the largest recorded mass murder in the history of humanity was profaned was when the Soviets removed the famous inscription ‘Arbeit Macht Frei’ from the camp gate.

At the last moment, when it was already packed in a box and ready to be transported to the Soviet Union, some Poles managed to buy it back for a few bottles of vodka.

The Poles in the camp eventually managed to send a letter to the governor of Silesia asking for help: “The fate of all of us Poles in the Oświęcim camp is unknown. Not so long ago, a group of 400 was sent together with German prisoners of war in an unknown direction,” wrote Andrzej Strzelecki.

After the governor took up their case, 12,000 Polish citizens were released from the camp.

Adding to this mixture of German POWs and Polish prisoners, there were also former Auschwitz prisoners living in the camp as free people. 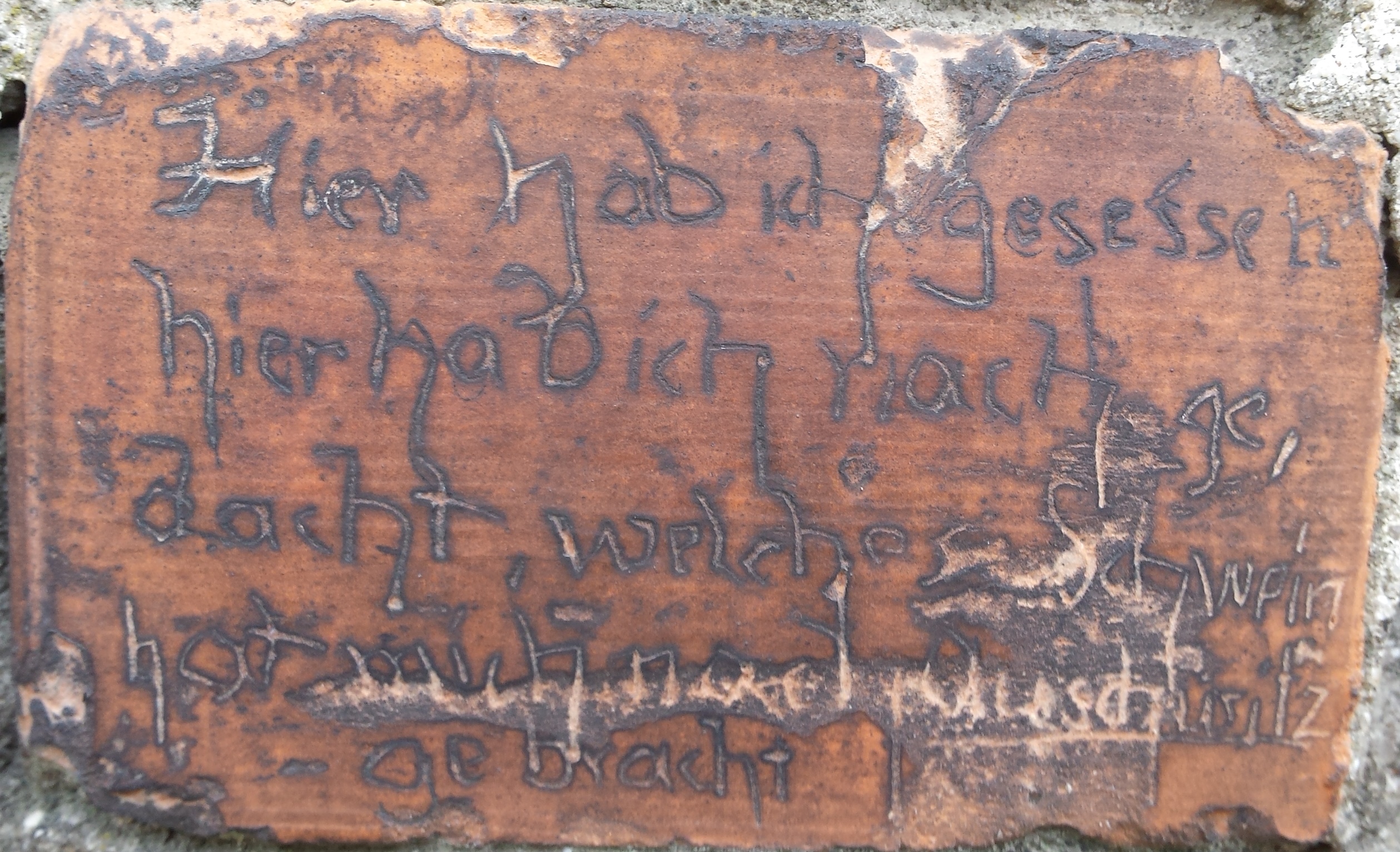 On the walls of Block 11 in Auschwitz you can still see inscriptions from German POWs etched in to the walls.Andrzej Cyra

According to Iga Bunalska, the time between the German occupation and the establishment was very strange and mixed. “In Auschwitz, alongside the German POWs, there was a hospital for former Auschwitz prisoners who were still getting better. There were also former prisoners living in the former SS buildings.

“A lot of former prisoners had nowhere to go back because, for example, Warsaw had been almost totally destroyed.

“So, although they were free, they came back to live in Auschwitz, and because the Soviets were using the camp as a prison, there were guards and barbed wire.”

In total, it is estimated that about 25,000 prisoners passed through all three camps. The number of deaths is estimated at around 150.

The three blocks that used to be part of the Gemeinschaftslager and later the NKVD/Public Security Office camps remain today and are used as private homes.

A plaque on the wall of one of them reads: “In memory of the innocent victims of the communist forced labour camps of the NKVD and the Public Security Office existing here between 1945 and 1946. The Society of Oświęcim City of Peace. The plaque was made on the initiative of descendants of the victims from Bielsko-Biała.”