A star in the making: TFN talks with Jimi Ogden, the British TV presenter that’s nailed down a slot in Poland’s DIY market

It’s an extraordinary building, the Praga Printing House. Announcing itself in a gloomy, grey flurry of communist concrete, it’s in this eastern Warsaw facility that 100 million books were printed during the plant’s socialist-era heyday. Today, however, the presses have, by and large, stammered to a halt, and the vacated halls and chambers infilled with photography studios, rehearsal rooms and other creative practices. Despite that, there’s few signs of life. The corridors are long, dark and silent, the stairwells mysteriously unsettling and the occasional unlocked room out-proportioned and illuminated by cosmic-looking skylights. It could, you imagine, be the perfect setting for a film from the canon of Kubrick or Lynch. Were you producing a Soviet remake of A Clockwork Orange, this setting would be ideal.

Ideal, it has also proved, for the filming of Rzeczy Od-Nowa, a cult DIY show fronted by Englishman Jimi Ogden. Aired on HGTV, twenty-four episodes were recorded here in his workshop, a small, dusty space engaged in a perpetual battle against thick layers of debris and dust. In this room, order ceases to exist. “I’m not interested in clean and tidy,” says Ogden, “I’m interested in chaotic places because without them I don’t see the fruits of my experiments and designs.”

Ogden, and his show, have tapped into the public’s growing appetite for home improvement. “With programs like mine,” says Ogden, “I think there’s an element of fantasy involved; even viewers who aren’t practically minded can lose themselves for a moment watching how objects and homes can be transformed.” Audience figures for Rzecy Od-Nowa have peaked at around the 180,000 number, an impressive statistic given the specialized niche of this market. Now, on the back of this success, a new show is in the pipeline. Having completed filming on 15 episodes of Jimi Prezentuje, Ogden’s latest project is currently in the cutting room being edited and tweaked for screening this year.

I’m not interested in clean and tidy,' says Ogden, 'I’m interested in chaotic places because without them I don’t see the fruits of my experiments and designs.'Kalbar/TFN

Recognizable by his trademark flat cap, Ogden fits perfectly with the Polish romantic notion of the Englishman abroad: engaging, enthusiastic and mildly eccentric. Speaking to him, one gets the idea of someone made for TV. It’s a point not lost on HGTV. “I’m learning Polish,” says Ogden, “but where the station is concerned they want me speaking English – that way comes the possibility of selling the show abroad.”

The surprise, given his natural screen demeanour, is that his subsequent success has been born through coincidence and chance. Deciding to follow his Polish wife to Warsaw, Ogden carved a modest living teaching English but found himself quickly disillusioned. “I found it a bit bizarre to be frank,” he confesses, “I’m not much of an academic English teacher so although I enjoyed the human angle of the job, I started exploring options of combining English lessons with woodwork tutorials. As things progressed, I started introducing myself as a woodworker as opposed to an English teacher.” 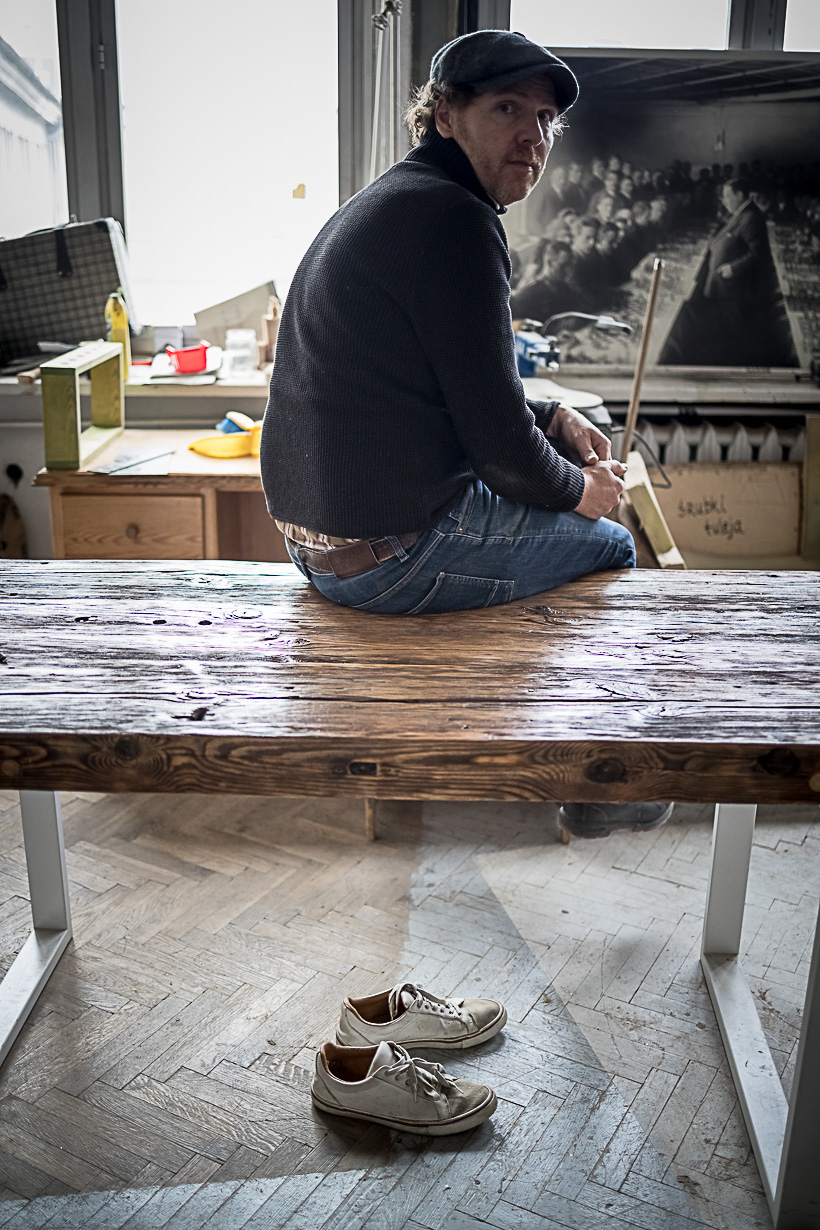 Ogden describes himself as a self-confessed 'maker of things'.Kalbar/TFN

The big break came when Ogden was asked to do some handiwork for his wife’s boss at a TV station. “Later,” he continues, “we were at one of her work parties when someone said, ‘you know what, you should make a program about using old things’. At the time I brushed it off as a polite passing comment, but a few days later I got a call asking if I could compile a test video so, that same night, I made some shelves out of an old guitar and edited the video after I’d finished.” The rest is history.

A self-confessed “maker of things”, for Ogden these recent happenings have been part of a trajectory that has organically developed over the course of time. “My dad was something of a ‘maker’ himself,” he says. “So from early childhood I grew up surrounded by piles of offcuts and heaps of chicken wire. I guess that’s where it all began, with me thinking how to utilize all these things so I could make swords and guns to play ‘army’ with my mates!” 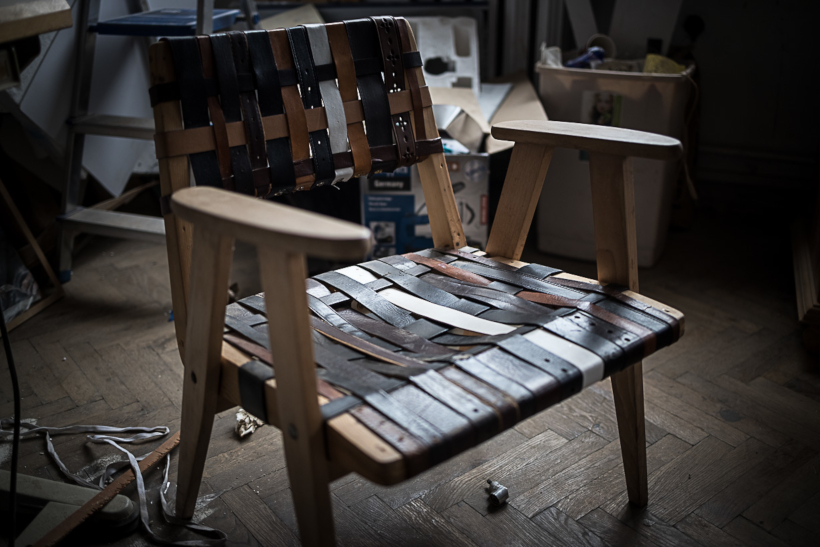 A chair made with old belt straps. Ogden places an emphasis on recycling.Kalbar/TFN

Leaving school at 16 (“My grades were pretty rubbish,” he admits), the work that has followed has been varied, ranging from the production of chandeliers to overseeing restoration projects in stately homes. Further, was a protracted spell working on the creation of rocking horses, first for someone Ogden rates as Britain’s foremost authority in the field, and then striking out on his own. It was an eye-opening period, with clients including cricketing legend Ian Botham (“it was for his daughter,” he quickly adds).

For Ogden, though, his passion nowadays is rooted in recycling everyday items that have been consigned to the grave. “Furniture manufacturers make a big deal of their green credentials,” says Ogden, “but you’ve got to understand how much waste they leave – go to one of their warehouses or stores and you’ll find piles of wood just chucked away. Furthermore, the furniture produced by these big manufacturers doesn’t create an emotional bond with the end user, so eventually you’ll find that discarded on the scrapheap as well.”

Reusing what others have deemed surplus has become Ogden’s signature, with the Englishman often buying second hand, online or even searching through skips for materials to use. “I love finding furniture,” he laughs, “I’m a bit like a magpie, always picking through things.” 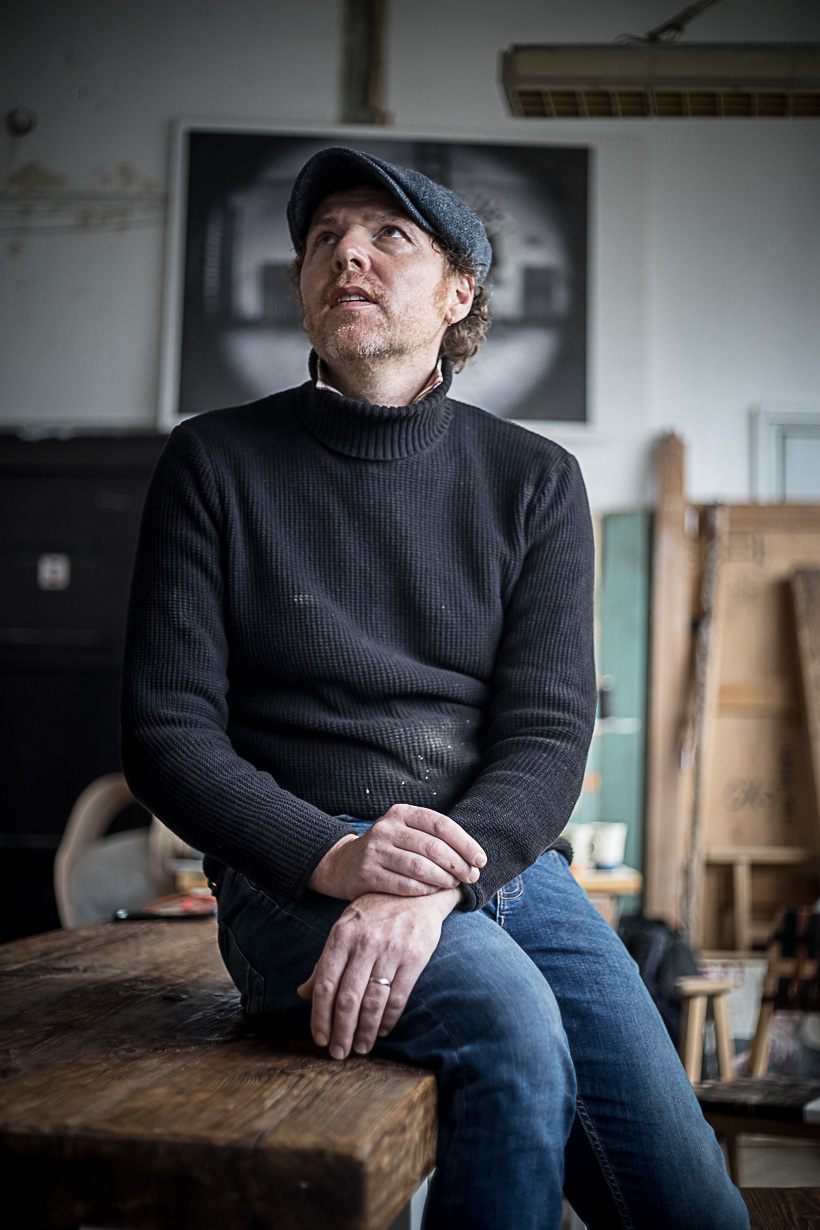 'With programs like mine,' says Ogden, 'I think there’s an element of fantasy involved.'Kalbar/TFN

From such chaste beginnings thrilling curiosities have been created: a lampshade revived by dozens of photographic negatives; a chair made from belt straps bought in bulk from a vintage store; and a ceiling light composed of a bike wheel and jars suspended from its spokes. “In one instance,” he adds, “I made a coffee table from three bits of wood I found and sold it for PLN 2,500.” This, he continues is one of the guiding philosophies he wishes to demonstrate with his TV work. “I want to show that instead of buying, you can make something,” he says, “and quite often it’ll have a legitimate end value.”

More than simply making for intriguing television, his work has been recognized for its quality and creativity by a growing number of followers (“right now,” he lets it slip, “I’m working on a hi-fi unit for the actor Borys Szyc”). Motivated by a desire to teach and pass on his own skills, Ogden appears almost evangelical in his devotion to his work. “It’s brilliantly therapeutic to make something. You’re focused on it fully whilst engaging both the mind and the body; people say they don’t have the time or the knowledge, but I want to show them that it’s not as difficult as it seems. Not only that, but that it can be enjoyable as well.” 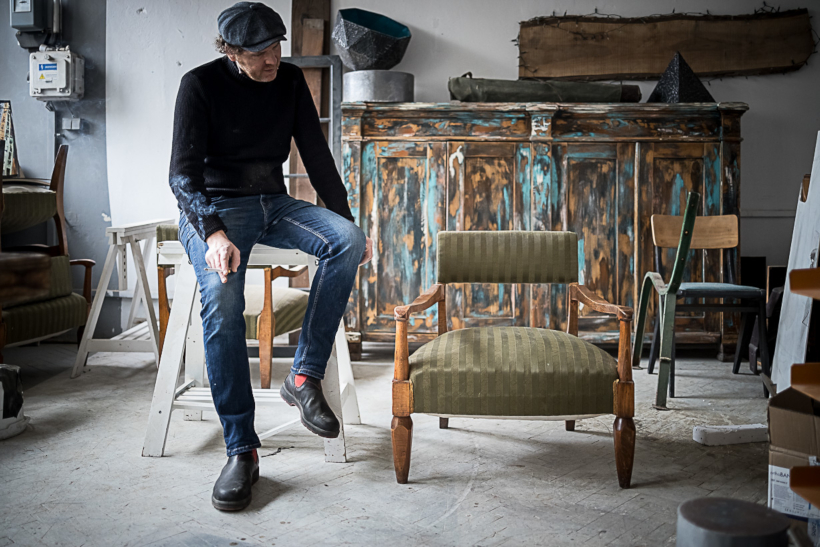 Deciding to follow his Polish wife to Warsaw, Ogden carved a modest living teaching English but found himself quickly disillusioned.Kalbar/TFN

“There’s a difference between having a house or a home,” he continues, “and while I don’t have an issue with people who like to have houses that are as shiny as showrooms, I prefer a home filled with things that you’re personally connected to – things that have an experience or story behind them, things that can start a conversation. By making something yourself, you have that extra special feeling. I’m not naïve enough to think that we don’t need modern things, but there’s definitely a balance that I’d like more people to find.”

Increasingly in demand for panels and public appearances, it’s this vigorously delivered message that has made Ogden a firm favourite among Poland’s DIY believers. “I don’t find it strange that some people recognize me,” he smiles, “I love it. You should treat life as a diary, and you need to strive to make each daily entry as interesting as possible. That can only really happen through meeting people, and it’s these people that ultimately influence the direction of your life.” As a living testament to the strange twists and turns that the world can dispense, he’s better qualified than most to conclude on such a note.