A drink to the times: A look back at Warsaw’s inter-war party scene

The heady, euphoric rush that came with Poland’s newfound independence was itself reflected by a dynamic food and social scene that flourished throughout the country during the inter-war period. Naturally, the capital was at the forefront of developments, with Warsaw establishing itself as a city eager to embrace both the carefree spirit of the age and wider global trends.

For the elite, it was the town’s clutch of top class hotels that were the places to be seen, with the Bristol, Europejski, Polonia and Savoy forming a formidable quartet known for their extravagant banquets and society balls. Frequented by industrialists, diplomats and Poland’s most powerful figures, these hotel restaurants promised luxurious surroundings, stiff-lipped service and prodigious menus written in flowery language. Famously, it was in the Sala Malinowa of the Bristol Hotel that Józef Piłsudski, the founding father of Polish independence, made a stirring speech declaring what ultimately transpired to be a brief retirement from political life.

Though social divides were sharp, and poverty widespread, eating out wasn’t just a pastime reserved for the rich. More moderately priced restaurants abounded, with Warsaw even able to boast two vegetarian restaurants by the names of Braterstwo and Warszawskie Zrzeszenie Jaroszów – from these small beginnings, could the denizens of the city ever have guessed that a century later their capital would be hailed as has having the third largest vegetarian scene in the world? Quite possibly, as by all accounts the people of Warsaw – particularly, the women of the city – had already caught on to the benefits of following a non-meat diet. Menus archived from the time reveal that already a significant number of mainstream restaurants were also offering meat-free options for conscientious diners. 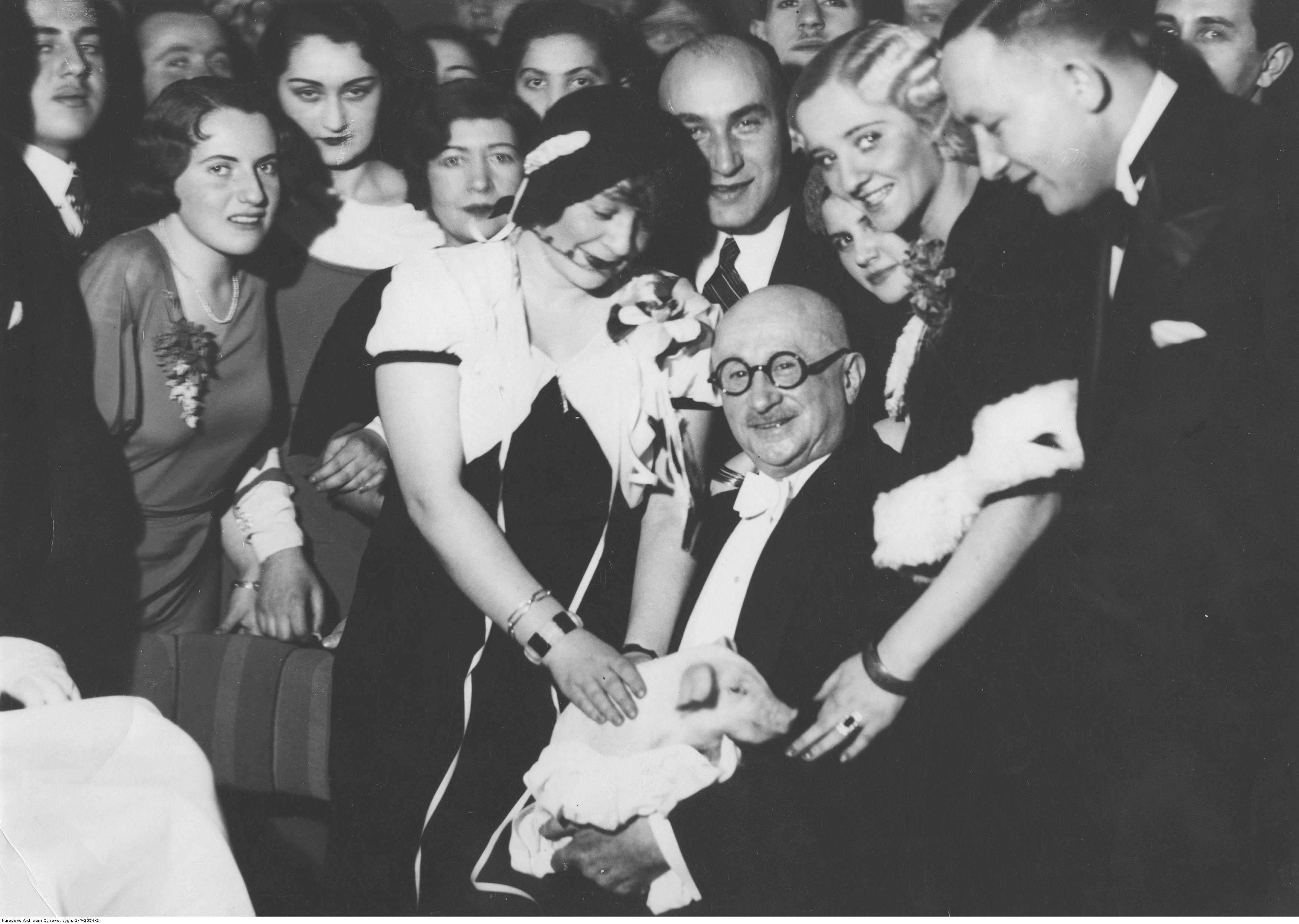 The man behind the Adria, showbiz impresario Franciszek Moszkowicz (centre). He wanted to bring a touch of American glitz and glamour to the city’s nightlife scene. Narodowe Archiwum Cyfrowe (NAC)

For the rank and file, though, it was the simpler pleasures that appealed. Sandwich and snack bars thrived, with classic orders involving tripe, bigos, eel in aspic and herring washed down with shots of vodka or an English porter, a pint of Pils or the local specialty: Piwo Grodziskie.

For the blue collar, however, no address was more magnetic than Gruby Józek, an open-all-hours pub accessed with a whispered password delivered through a small hatch in a creaky door. Found on the now non-existent Gnojna 7 – between Hala Gwardii and what is now ul. Grzybowska – sources speak of a rowdy, low-ceilinged bar bathed in a permanent murk and the impenetrable stink of cheap, fried food. Attracting a thrilling range of characters, it was here night porters and market traders would mingle among racketeers and villains and other such types dwelling on society’s fringe. Celebrated for his bawdy jokes, brute strength, hefty weight and ability to sink a litre of vodka in one hearty glug, landlord Józef Chargeski commanded respect across the city: resistant to bribes and fair to all, it’s said his funeral united all sections of Warsaw, from lawmakers and policemen to warring underworld gangs. 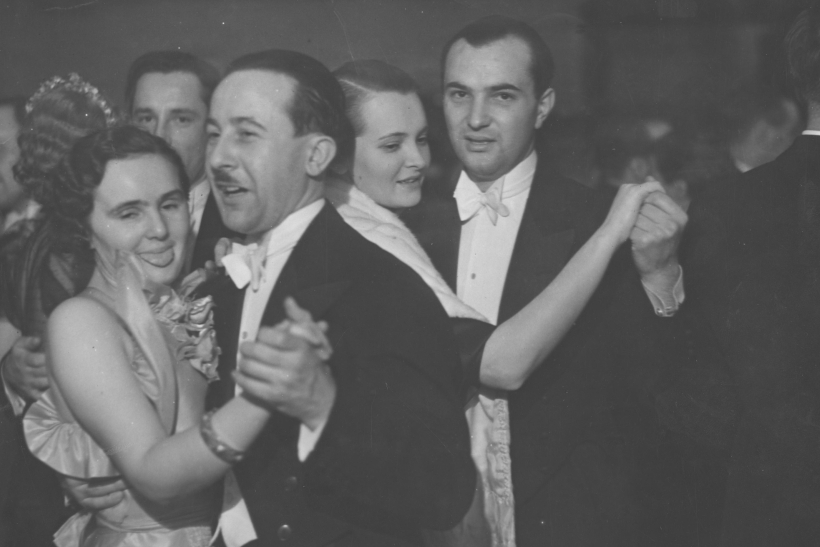 Revellers on the dance floor at the Bristol Hotel. The hotel is one of the few survivors of Warsaw's pre-war party scene.Narodowe Archiwum Cyfrowe (NAC)

Like the very best dive pubs, Gruby Józek’s was special for the sheer diversity of its audience. Beyond those plucked from life’s seamier side, it was popular among uniformed army officers looking to cut loose for the night, not to mention more upper class thrill seekers flirting with the underbelly of Warsaw. For the most part, though, these latter groups would have been found enjoying the numerous dance halls that served to define the time.

Advertising the city’s first such “dancing” event, it was Nowy Świat’s Savoy Hotel that kick-started the craze with others swiftly following suit. Soon, Café Bodega heaved to the sound of ragtime jazz, whilst venues such as Qui Pro Quo and Morskie Oko became pioneers of risqué cabaret. All these, mind you, paled in insignificance when compared to Adria.

Fully titled Riunione Adriatica di Sicurtà (and standing on what is, nowadays, ul. Moniuszki 8), it was opened by showbiz impresario Franciszek Moszkowicz at a time when many of Warsaw’s social venues were closing in the wake of the global crisis sparked by the Wall Street Crash. Conceived as the first “American style club” in Poland, little expense was spared in an ambitious fit-out that became the talk of the town. Costing PLN 1 million, the air-conditioned interiors (the first in the city) contained a winter garden filled with exotic succulents and chattering parrots, a 1,500 capacity subterranean dance floor with a Pirelli-produced rotating floor made of rubber (so as to save enthusiastic dancers the embarrassment of slipping), gilded ceilings, marble columns, a suspended staircase and tinkling water features. Such was its splendour, the fashionable magazines of the era declared it to be ‘The Eighth Wonder of Warsaw’. 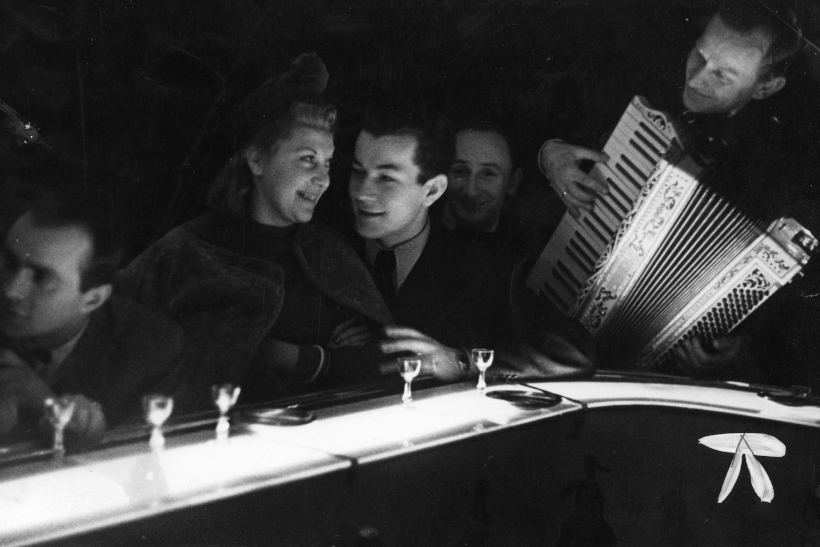 A couple get serenaded at Adria's bar. The club boasted a rotating dance floor and could hold 1,500 people.Narodowe Archiwum Cyfrowe (NAC)

When it officially launched in February 1931, it became an instant sensation with its first two years of business attracting over 2.5 million guests. Home to three house bands playing swing sounds and Argentinean tangos, socialites flocked from far and wide to frolic the night away under the influence of zany U.S drinks such as ice cream soda and the on-trend Manhattan cocktail – Jan Karski, the man who would later smuggle news to the West about the extent of the Holocaust, fondly reminisced in later life about his first such cocktail enjoyed at Adria’s New Year’s Eve party in 1934.

Nights were epic, with one of the more debauched stories involving Józef’s Piłsudski’s aide entering on horseback to the appreciative cheers of the roaring masses. Though it’s unlikely this ever happened, the mere existence of such rumour typifies the buzz that surrounded this club. As for Moszkowicz, he died in 1939 shortly before the outbreak of WWII, with his will stating that any outstanding bar tabs owed to Adria be destroyed. It was the end of an era in more ways than one. In the first year of occupation, Poles were allowed into Adria for New Year’s Eve, but only until their 7 p.m. curfew. Though a band played resolutely on, it’s said that no-one present had the heart to dance. For the time being, the party was over.