Today’s transshipment of the 9 millionth 20-foot container at the Deepwater Container Terminal (DCT) in Gdańsk marks the revival of Polish Baltic Sea ports and accentuates Poland’s economic success built continuously since the accession to the European Union.

Polish Investment and Development Minister Jerzy Kwieciński visited DCT to celebrate this achievement, stating that: "Poland wants to have a strong position in this branch of transport and we want to take advantage of the potential of ports in Gdańsk, Gdynia (northern Poland) and Szczecin-Świnoujście (north-western Poland)."  Speaking to reporters at DCT, Kwieciński added "the government wants to rebuild the strong position of Polish ports on the Baltic Sea," thanks to "investments in port infrastructure, but also investments in access infrastructure, both landward and seaward ones."

The DCT Gdańsk ranks 16th among such facilities in Europe, being able to service the world’s largest ships (21,413 TEU - twenty-foot equivalent unit – standard measure of cargo containers). Operating a major container port is crucial to economic development, as maritime transport remains cheaper than air transport, and 80 percent of goods are still transferred this way.

A few years ago, Polish cargo had to come a long way by road, rail or transshipment from a port on the North Sea. From the introduction of the new logistic model enabled by DCT Gdansk, Poland can trade with Asia by sea directly, making trade more efficient, reducing cost, giving more competitive delivery times and at the same time providing a lower carbon footprint per container. Only last year DCT doubled its capacity and saw a growth of 24% to just under 1.6m TEU. This year is also very promising as the world’s two largest Alliances provide direct calls from Asia with the largest ships in their fleet to Gdansk, then transshipping cargo to the Baltic States, Sweden, Finland and Russia. 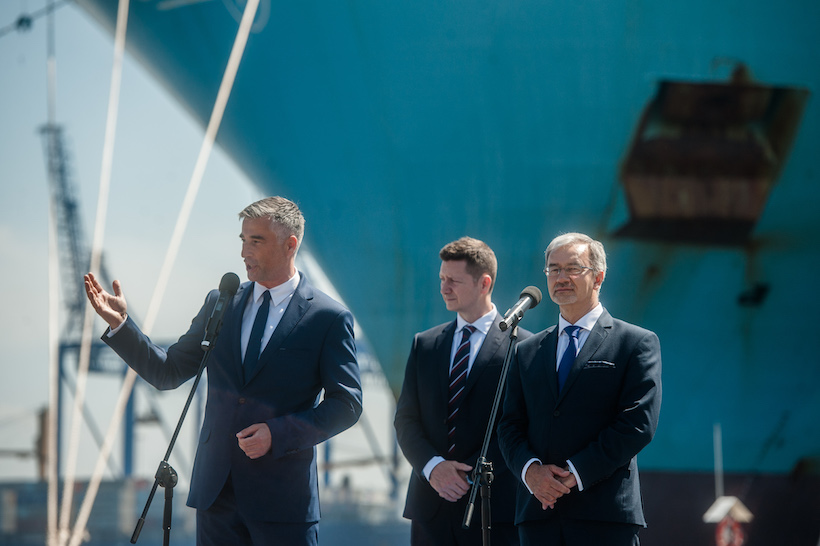 For both the 2M and Ocean Alliance service, the vessels turn around at Gdansk – DCT is the last port of call with up to 19,000 TEU exchange per vessel, one of the biggest vessel exchanges in the world. Then  they commence their return journey to Asia.

Growing ocean container traffic is fueled by Poland’s economic growth i.e. 5,1% in the 4th quarter 2017, driving a low unemployment rate of 6,6%, and making Poland attractive for up to 1,5m Ukrainians workers. This is also facilitated by a program of improving road and rail infrastructure.

This confirms what many already knew. Poland is using its chance to play a strategic role in transport and the logistic sector in Central and Eastern Europe. EU membership guarantees stability and development, infrastructure financed by the government and by private investors is properly utilized, and the state budget is getting billions of złotys from VAT, custom and excise duties.

US forces will remain in Poland regardless of presidency - MoD