Complimenting his existing body of work, photographer and historical colorizer Mariusz Zając has again wowed the internet, this time after releasing a painstakingly remastered video showing Poland during the early years of WWI. 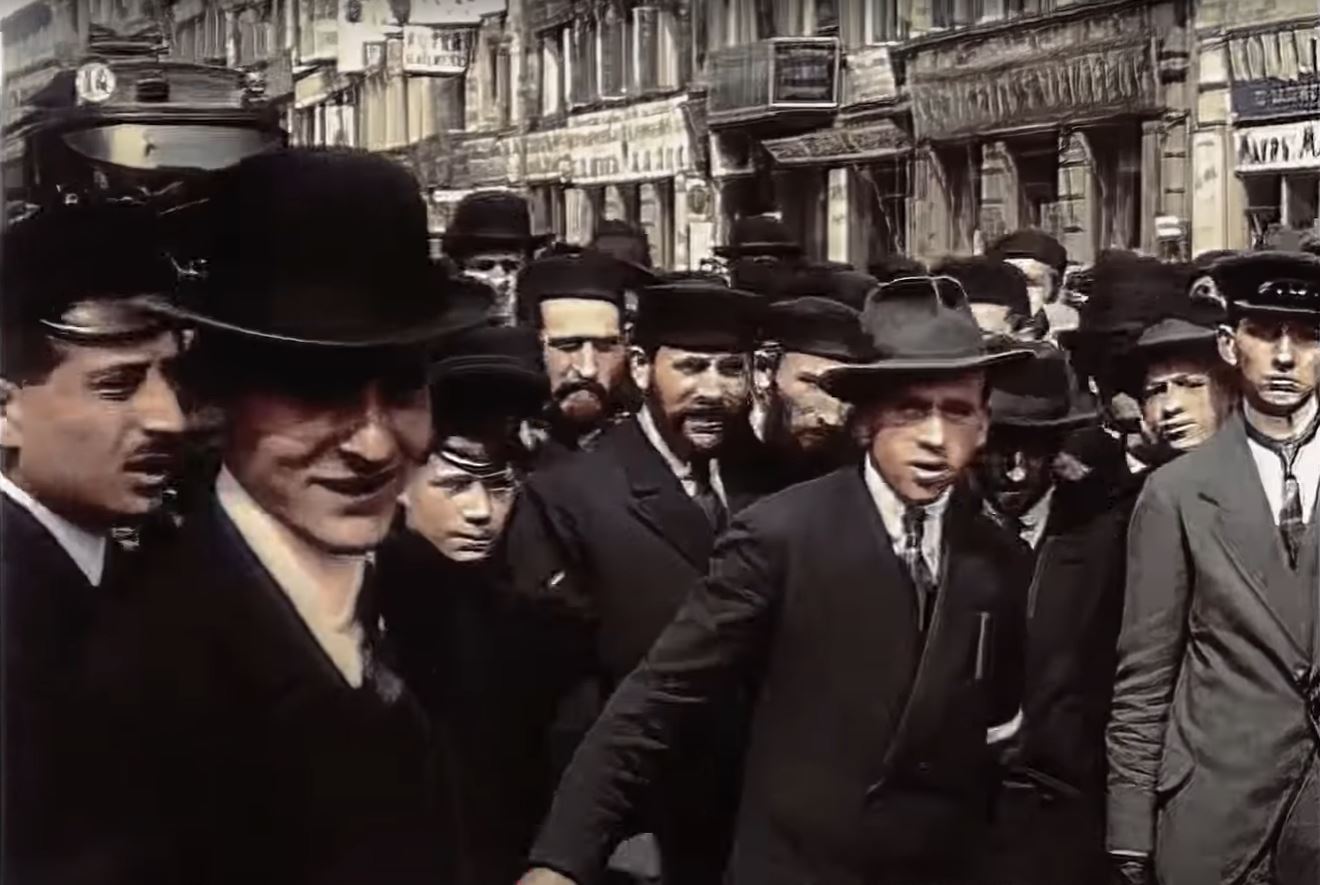 To a background of stirring and suspenseful music, the video pans to the Jewish Quarter to show the district teeming with life. Often grinning broadly, a scrum of people happily jostle to be filmed. Mariusz Zając

Beginning at Dworzec Wiedeński, the city's principal train station, the video clearly shows a sign bearing the name: Haupt-Bahnhof Warschau- the name handed to the station after the city was occupied by German troops in August 1915.

Smiling, a group of German officers with lavish handlebar moustaches check documents whilst curious crowds of Poles gather to watch a column of captive Russian officers escorted down a platform. 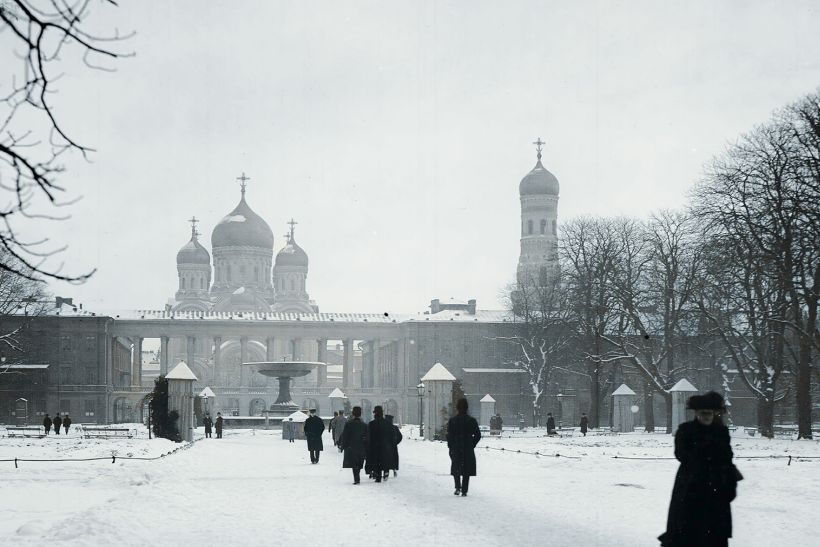 Exuding a sense of eerie poignancy, the clips also offer an intriguing insight into how Warsaw once looked. Mariusz Zając

To a background of stirring and suspenseful music, the video next pans to the Jewish Quarter to show the district teeming with life. Often grinning broadly, a scrum of people happily jostle to be filmed.

Speaking to TFN, Zając says: “A lot of the topics I colour are the result of internet followers sending me interesting material. That was the case with this film. I was sent the link and to my astonishment, saw that it featured shots of Warsaw that I’d never seen before.”

Switching to Poznań, the video next shows a seemingly endless phalanx of pike-helmeted troops marching enroute to the front as part of von Hindenburg’s army, before again returning to Warsaw to present the epic sight of Nevsky Cathedral.

Symbolic of Imperial Russia’s hegemony over the Poles, just over a decade later it would exist no more, destroyed and dismantled as part of independent Poland’s drive to rid itself of reminders of Russian rule.

Providing a subtle context, these frames do much to demonstrate Poland’s historically unfortunate geography, sandwiched between two competing empires. 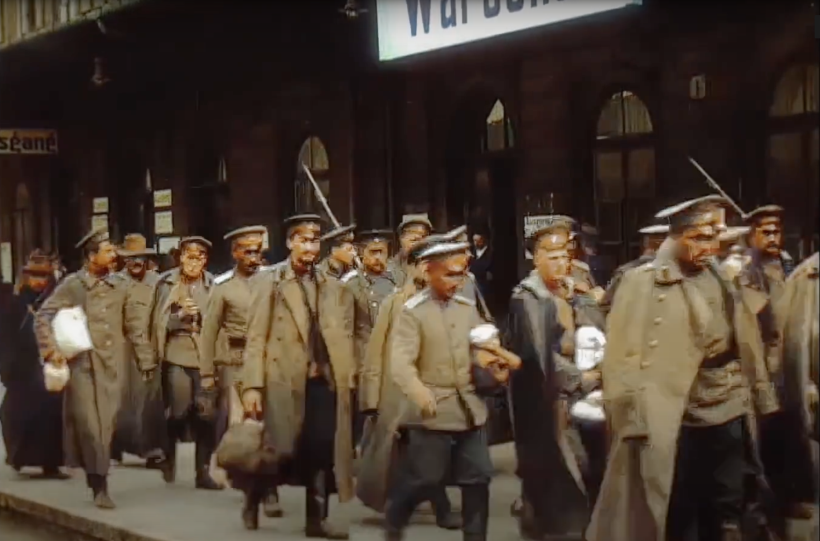 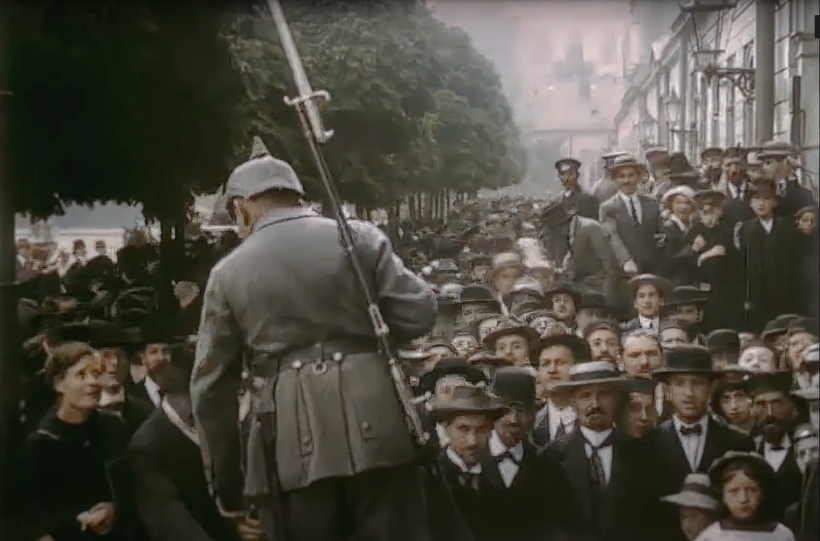 Providing a subtle context, the frames do much to demonstrate Poland’s historically unfortunate geography, sandwiched between two competing empires.Mariusz Zając

Coloured using a pioneering technique developed by Zając, the six-minute film is a stunning work that captures both the excitement and trepidation that greeted this early stage of the war.

That it is so convincing is a tribute to the skills of Zając, and even more so given that he only started properly exploring this genre last year. 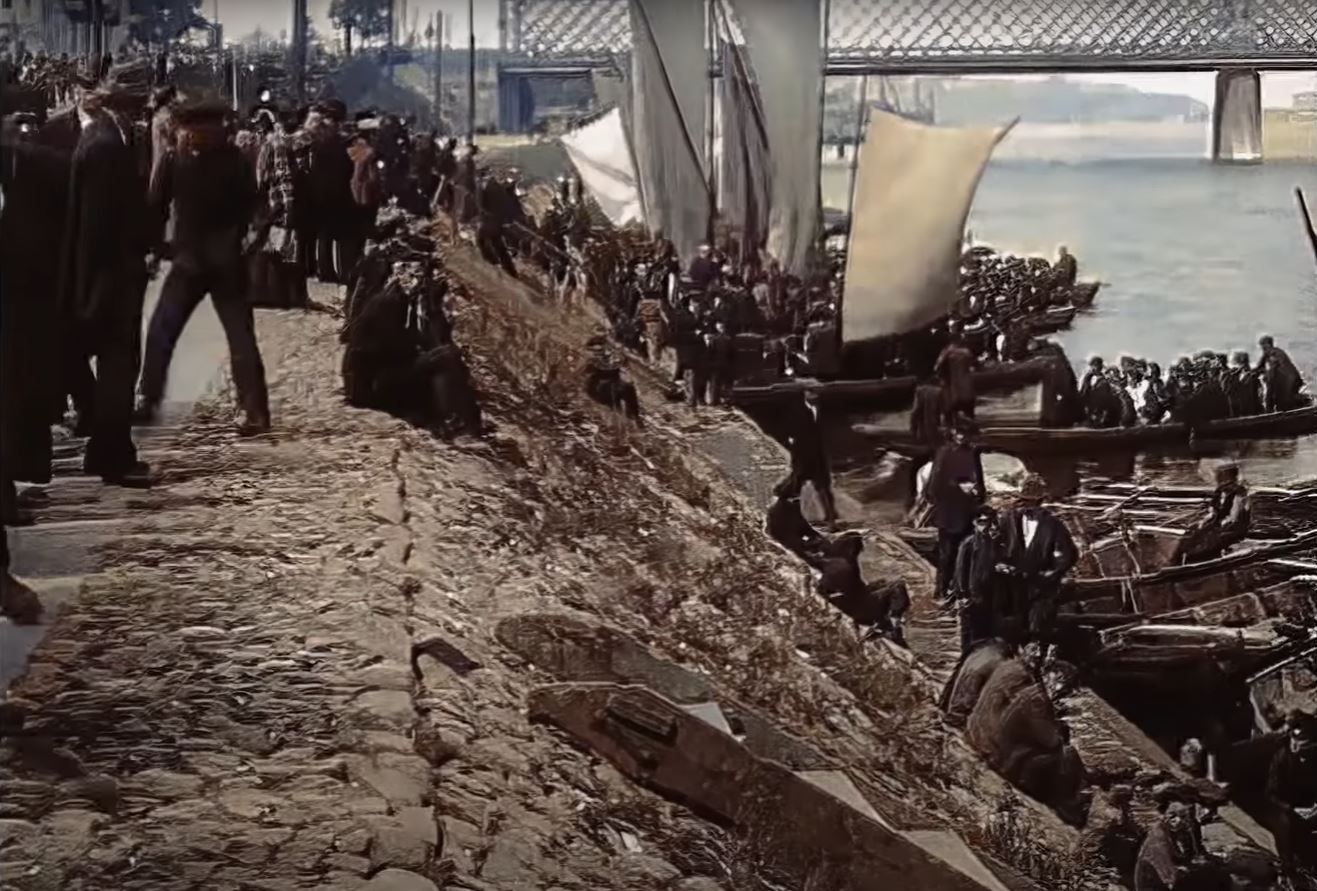 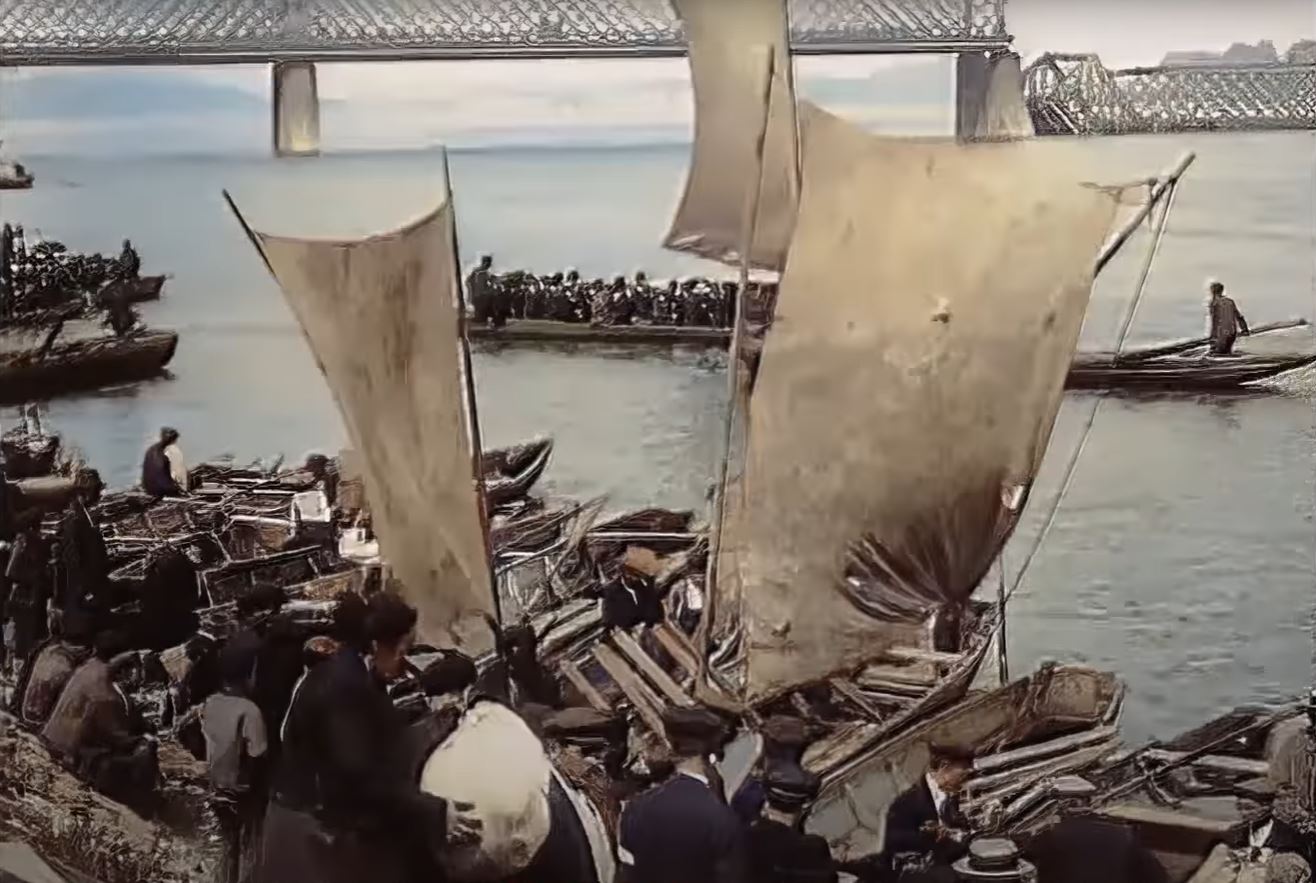 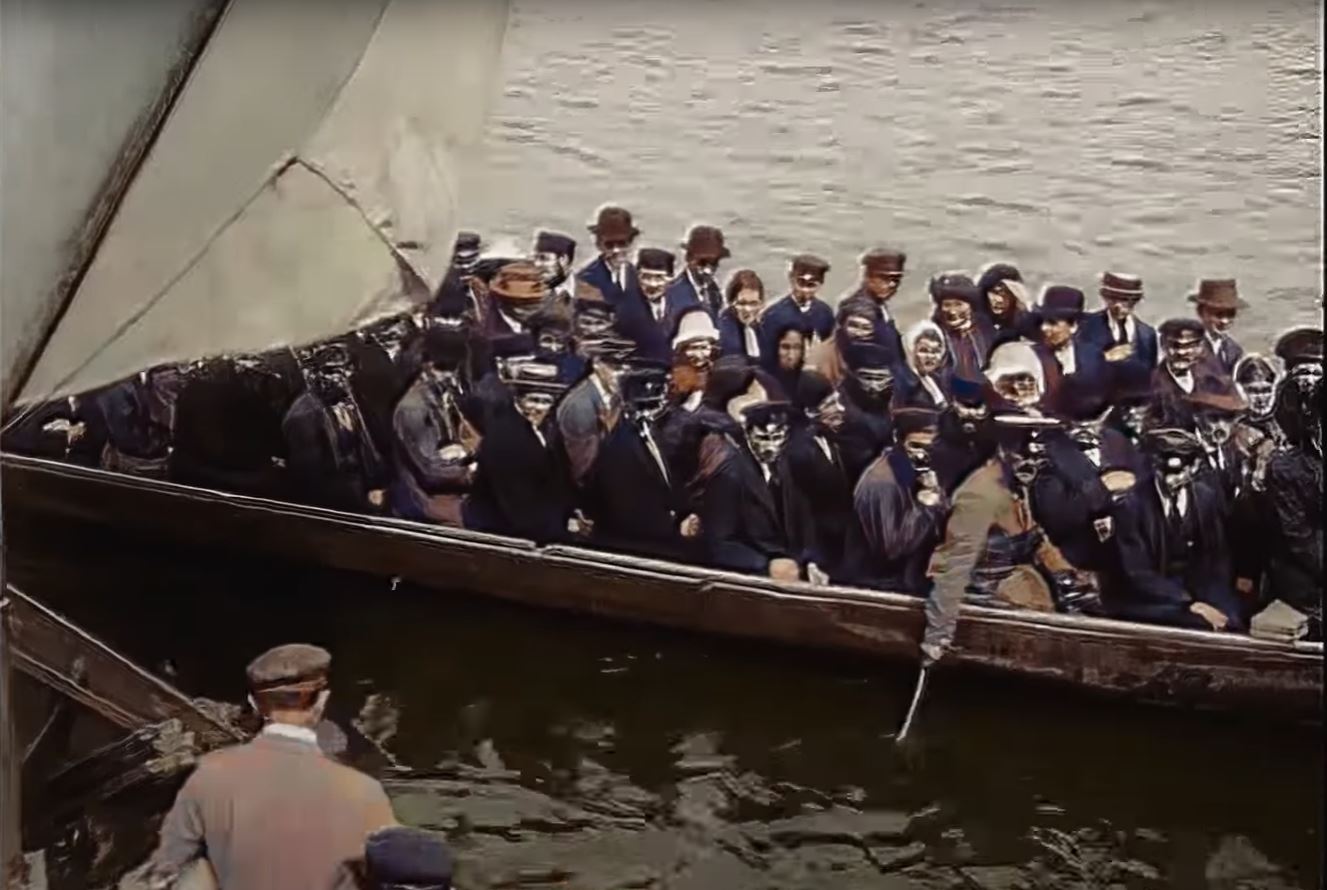 It is hard not to feel anything but an overwhelming compassion as the camera focuses in on a fleet of sailing boats crammed with desperate refugees fleeing westwards.  Mariusz Zając

“I began taking colouring seriously after the success of my first few photos and films,” he says.

“Those debuted in February 2020, and it was then that I realized there was practically no competition in this field – that’s when I decided to take advantage of this niche and really expand my knowledge.” 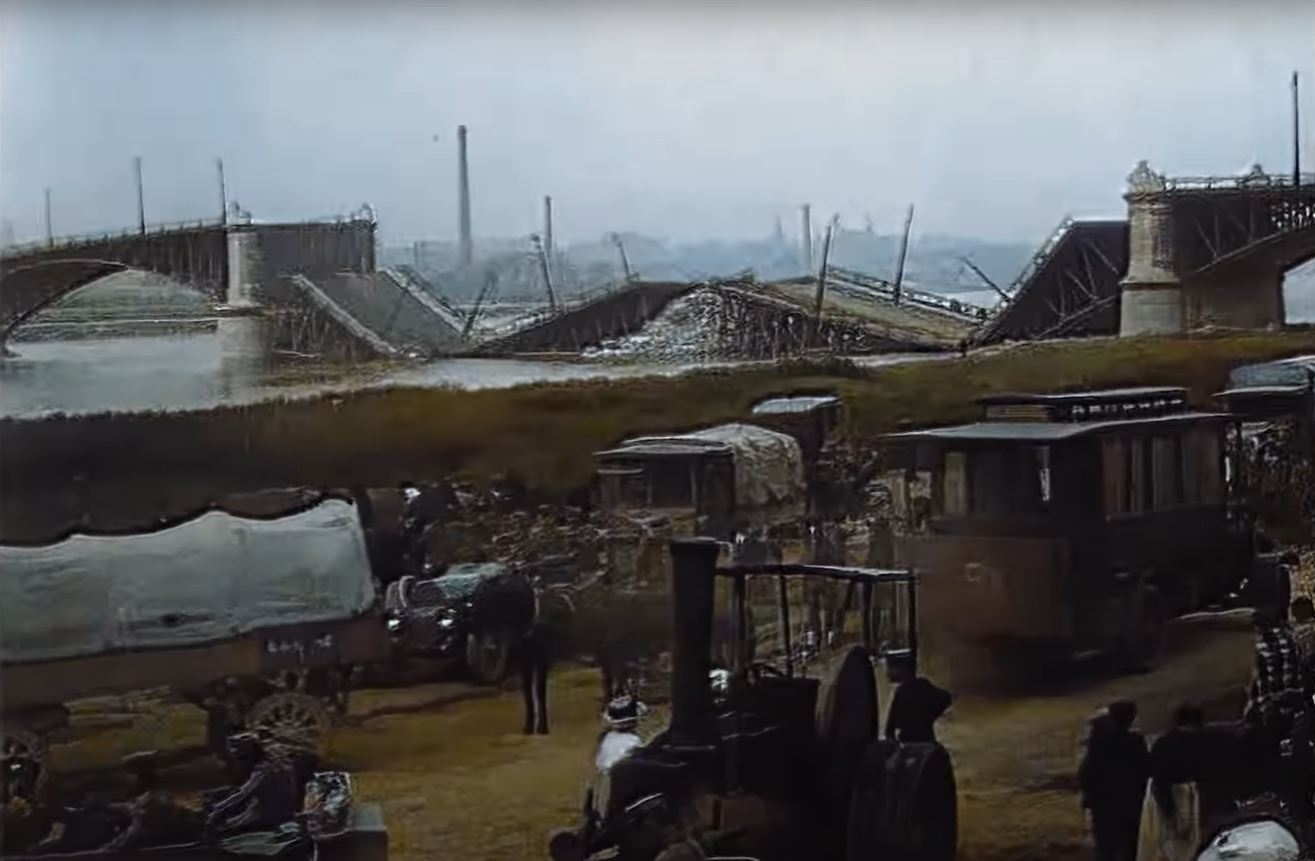 With just the bridges destroyed during the Russian retreat, we are treated to a panorama of a city in the throes of heavy industrial development. Mariusz Zając

Juggling jobs in the IT sector and, also, as a wedding photographer, his prior experience in digital photographic post-production acted in his favour, and he has since honed his own methods to lend additional authenticity to his colourizations.

“I started colouring photos of pre-war Warsaw because no colour photos exist from this period – the earliest that have survived were only taken during the 1944 Uprising, so while you can find many great and beautiful pictures of Warsaw, none are in colour. 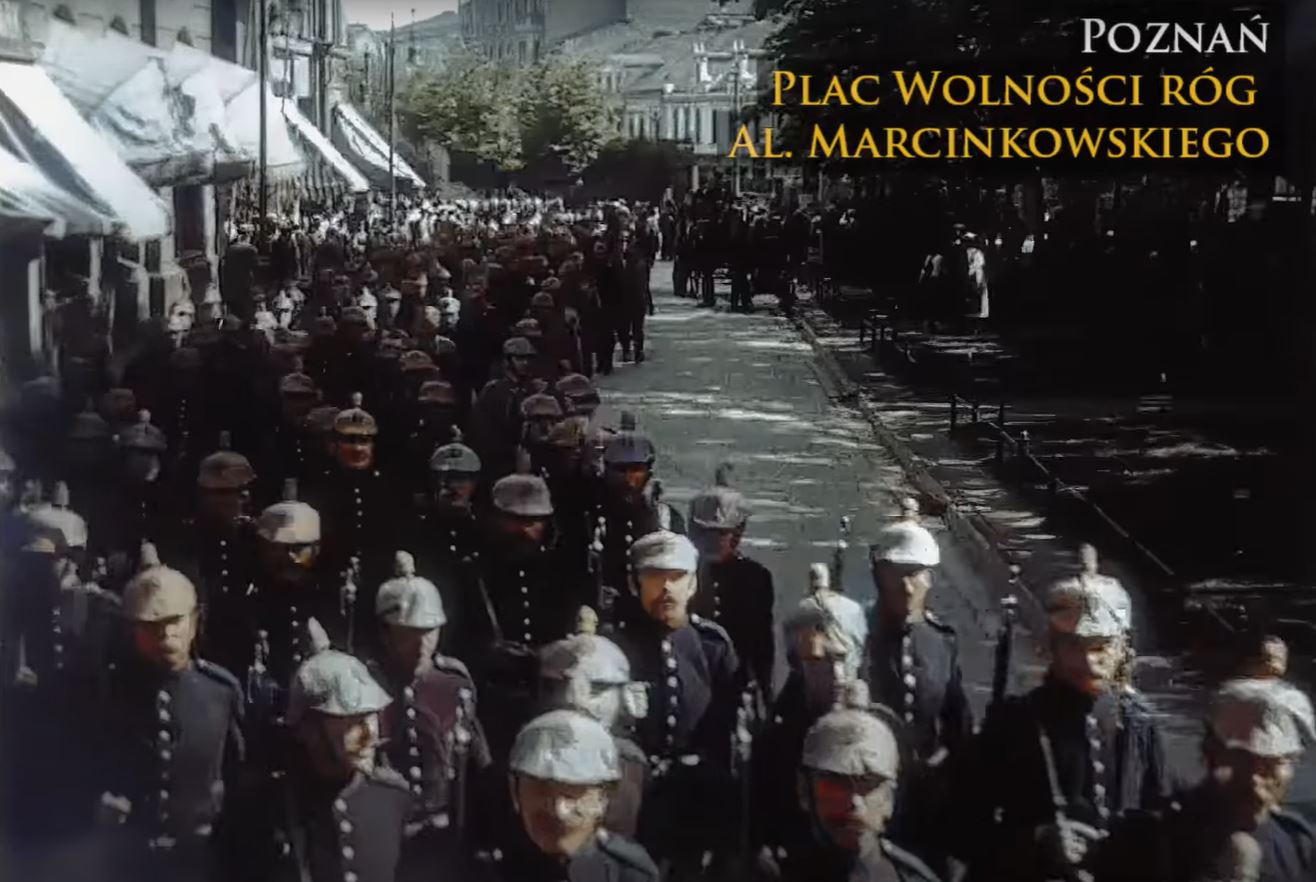 In Poznań, the video shows a seemingly endless phalanx of pike-helmeted troops marching enroute to the front as part of von Hindenburg’s army.Mariusz Zając

“As for colouring, I’m obviously not the first to do it, but I think I have approached the whole subject of colouring in a way that is totally different to others,” he says.

Whilst others have resorted to more basic, manual methods, Zając instead sought to harness his tech background. 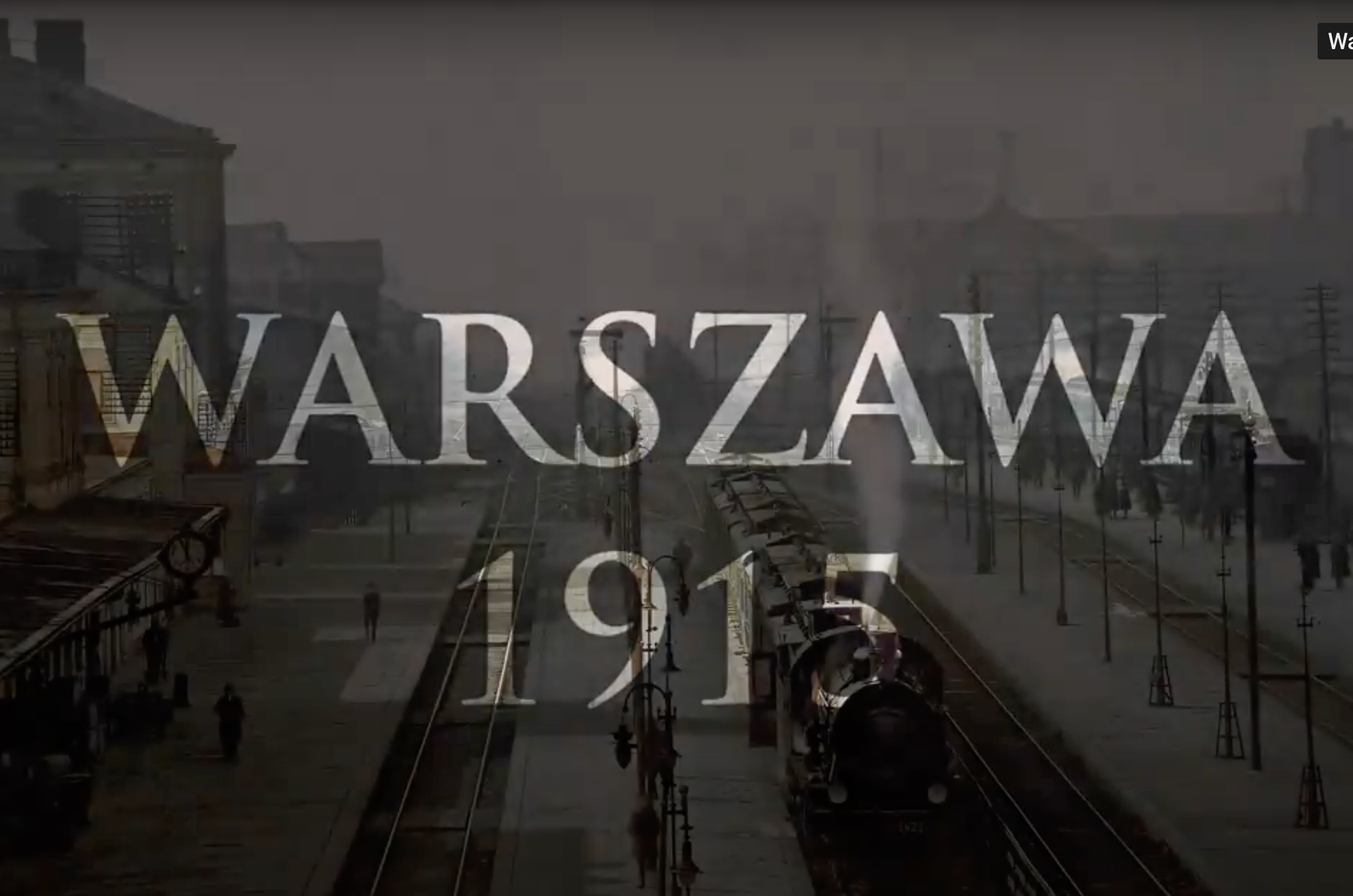 In layman’s terms, Zając first uses the deOldify program before then unleashing his own AI algorithms.

“I try to modify the image in such a way that the graphics program does as much work as possible by itself, and I’ve found that such an approach makes it possible to achieve a very high level of detail in colouring.”

This, he says, has lent an extra realism to his output. 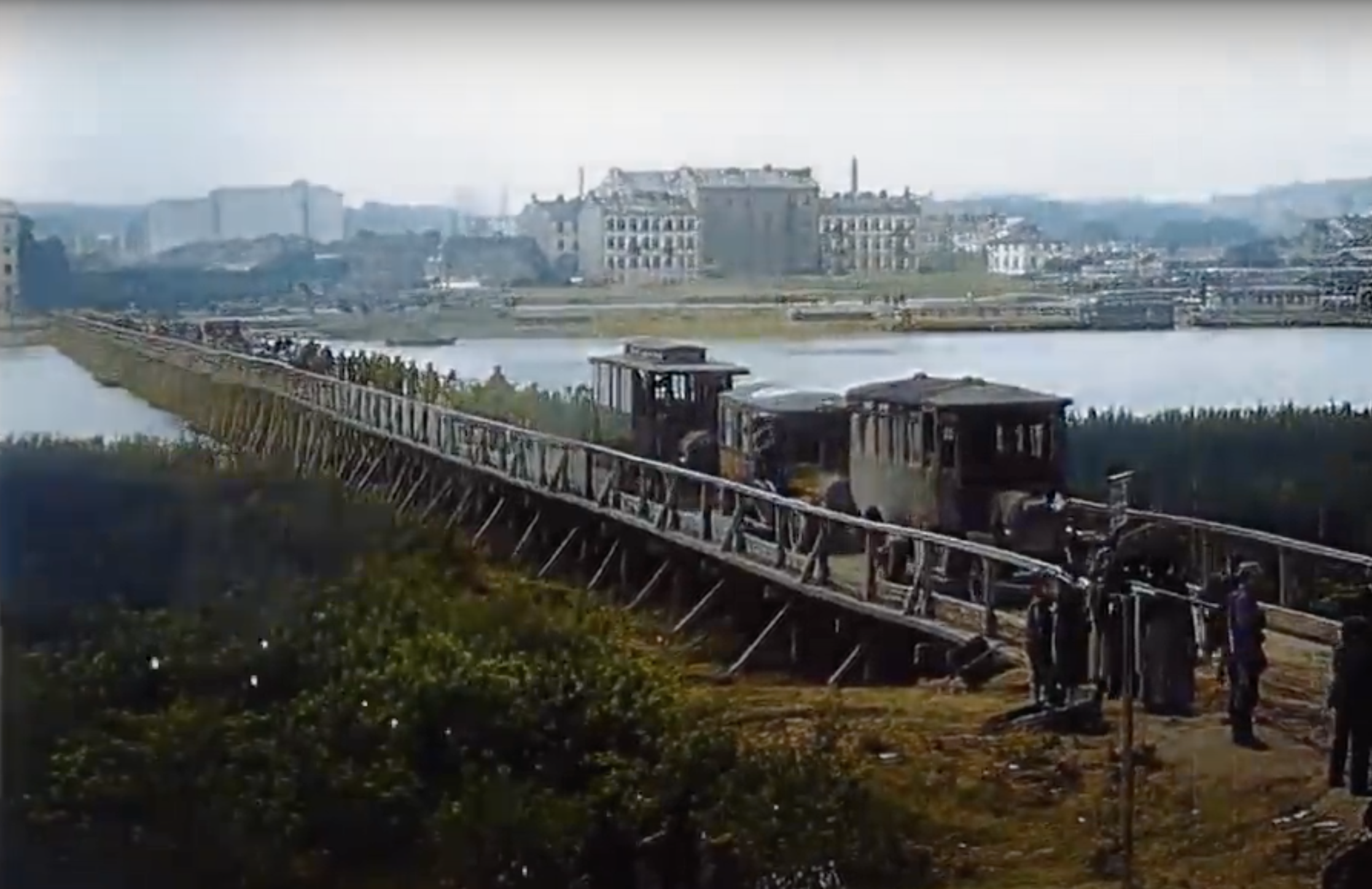 Likewise, it has differentiated him from others. “Colouring archival films is entirely down to the artistic vision of the creator as even today, there’s absolutely no way of reading true colours from a monochromatic image,” he says.

“However, deOldify and other graphic programs use neutral network algorithms to cover photos automatically, which explains why each image processed in this manner will end up with such similar colouring.” 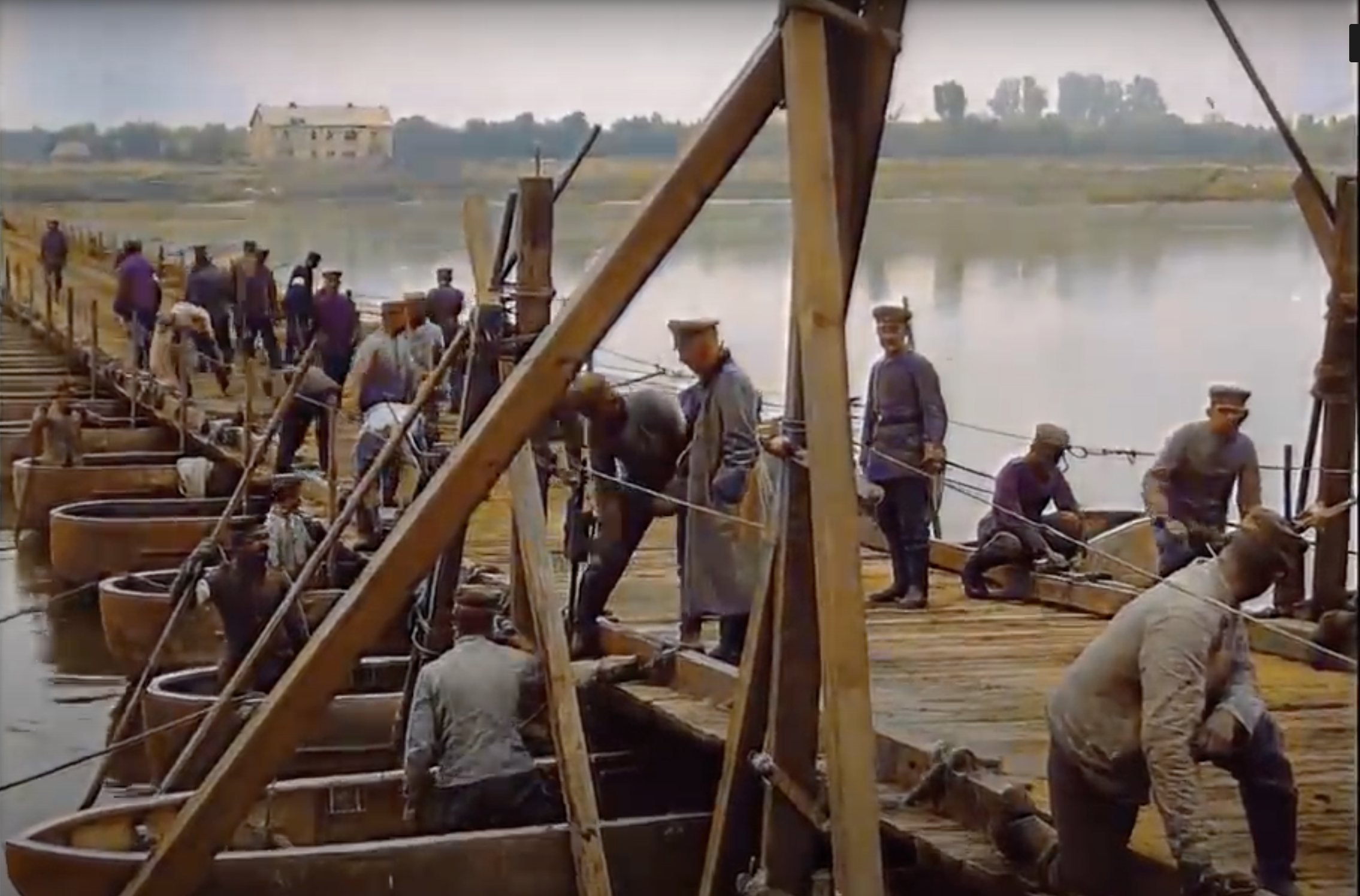 By going the extra yard, says Zając, his processes have given the videos and images he works with a whole new dimension to those that have gone before.

Certainly, his colours bring to life the conflict to ram home the sheer magnitude of the planet’s first large-scale mechanized war. 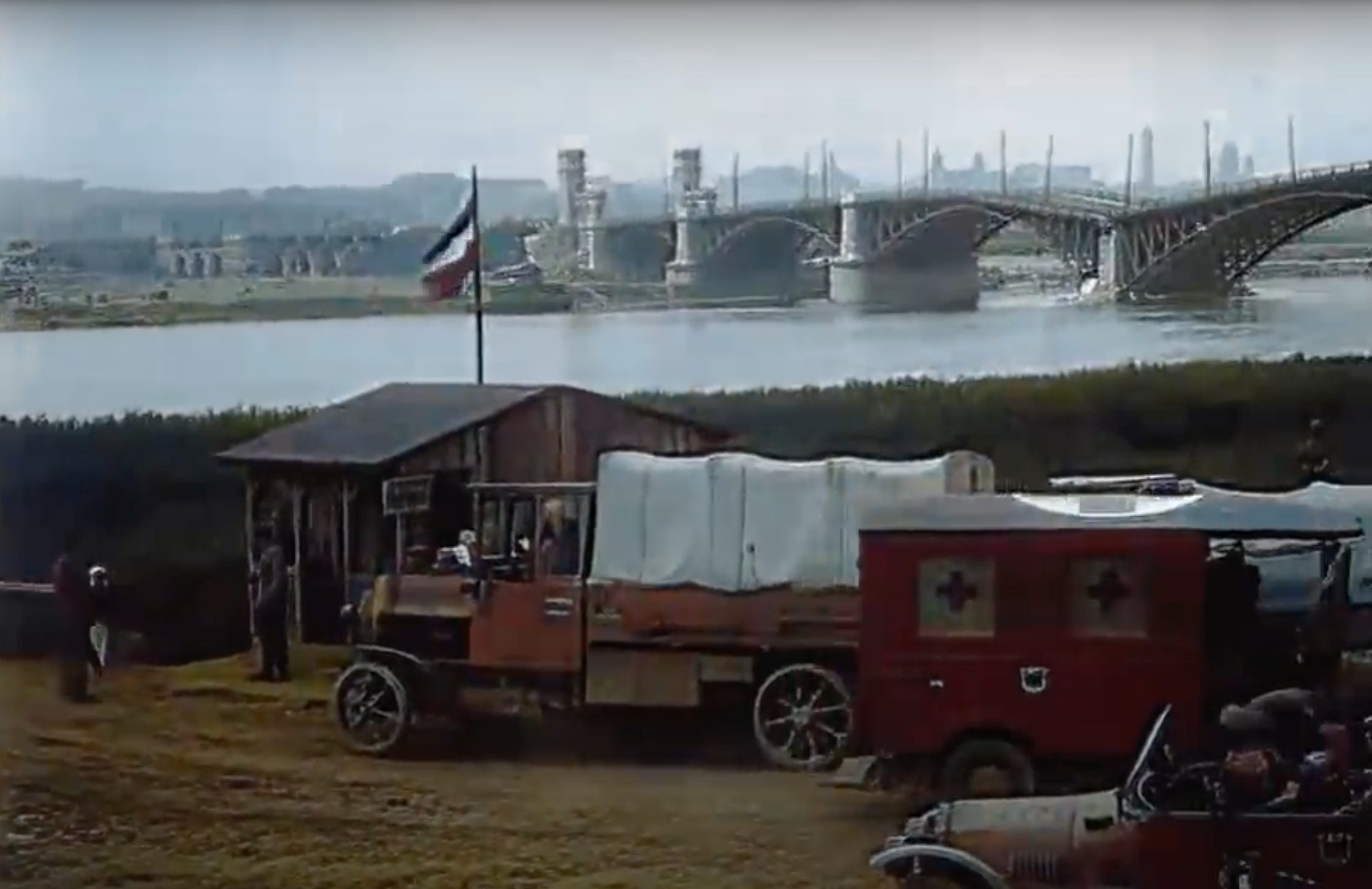 Exuding a sense of eerie poignancy, the presented clips also offer an intriguing insight into how Warsaw once looked.

With just the bridges destroyed during the Russian retreat, we are treated to a panorama of a city in the throes of heavy industrial development. 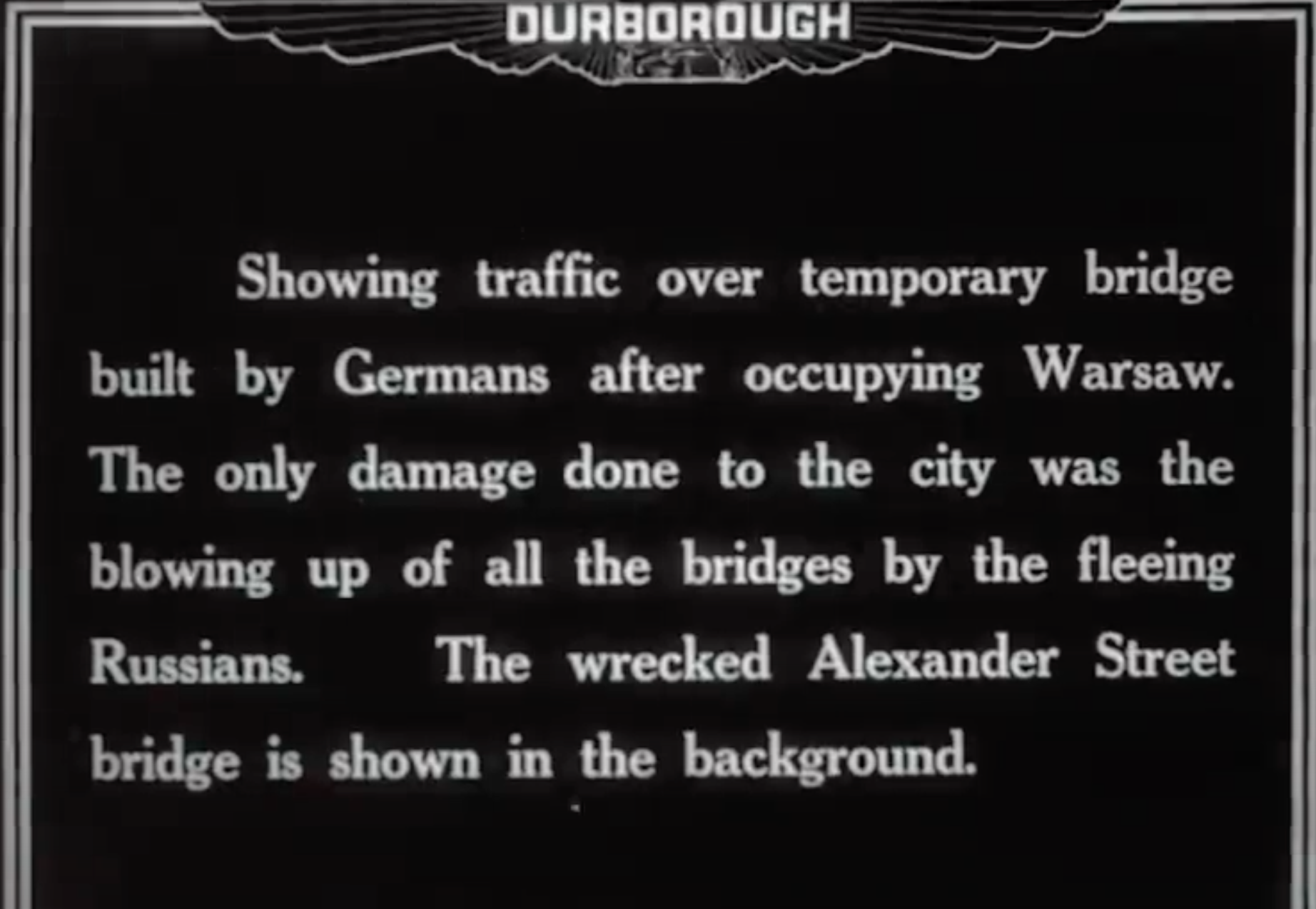 Dominated by chimney stacks – most prominently the one that soared over Powiśle’s power plant (now revived as the mixed-used Elektrownia centre) – only the wrecked humps of Poniatowski Bridge allude to an ongoing war.

“I think that’s the scene that makes the most lasting impression on me,” admits Zając. “As someone that’s lived in Warsaw all his life, I’ve crossed that bridge myself hundreds if not thousands of times.” 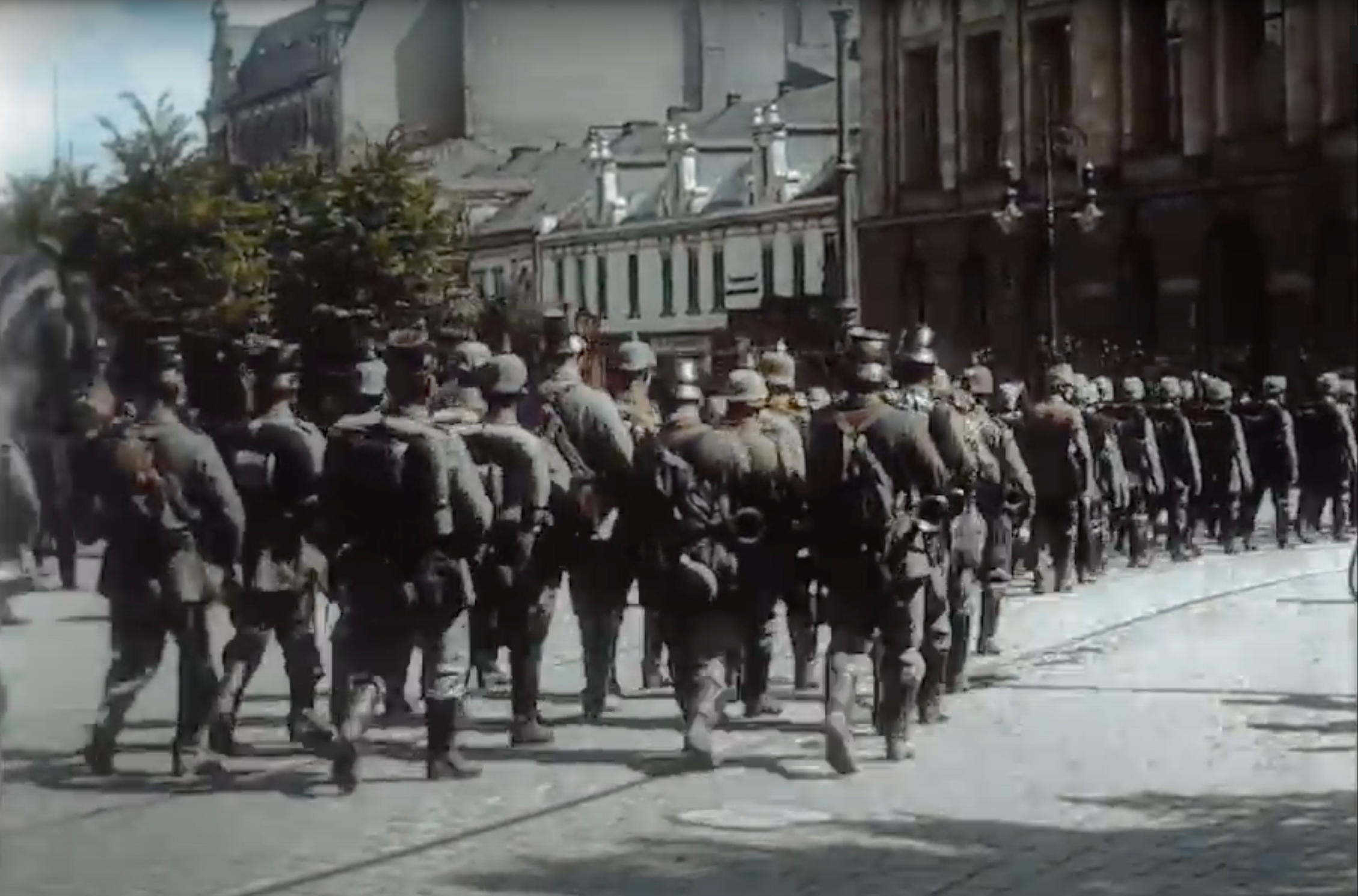 But there are hints of tragedy, as well, and it is hard not to feel anything but overwhelming compassion as the camera focuses in on a fleet of sailing boats crammed with desperate refugees fleeing westwards.

Humanized through Zając’s use of colour, the pain and sadness etched in their faces is tangible. 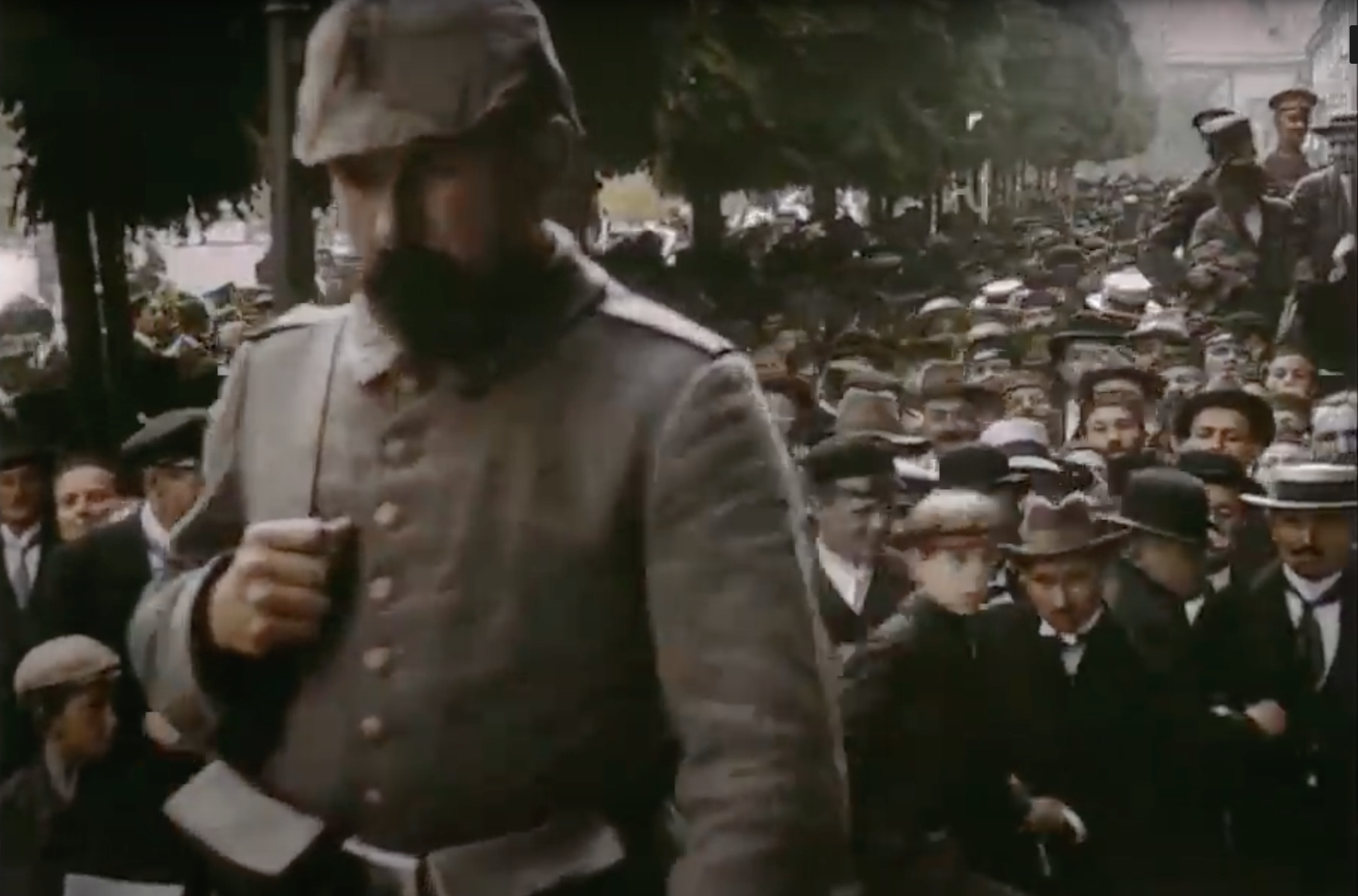 Already amassing over 40,000 views since premiering on YouTube last week, the video has served to cement Zajac's growing reputation as one of the most exciting colorizers currently practising.

For others, however, it is altogether something more powerful: a touching and nostalgic view of a city that would endure even greater catastrophe within the lifetimes of many of those captured in the video itself. 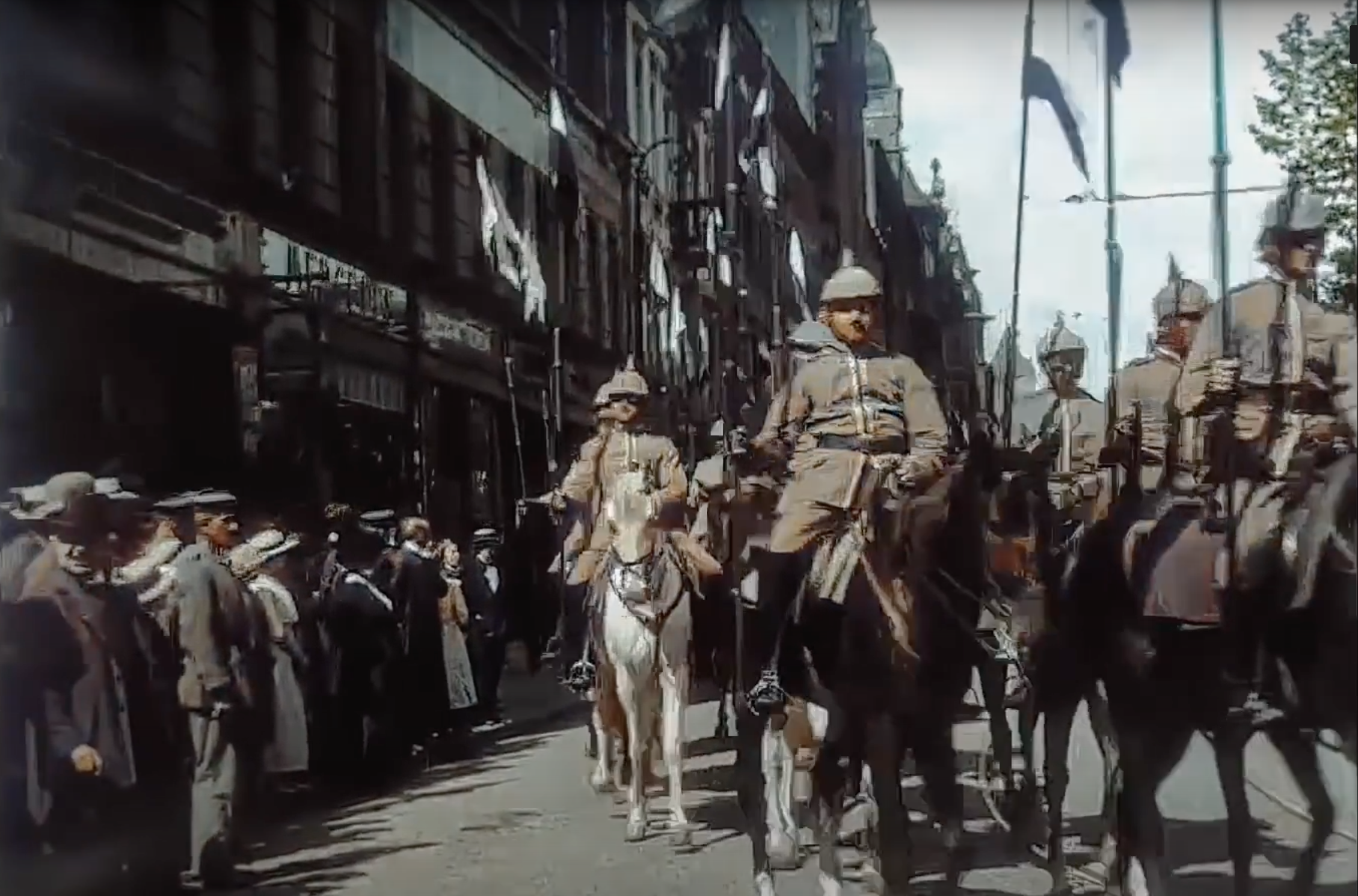