A Beast, a God, and a Line: New exhibition of contemporary Asian and Pacific art opens in Warsaw

How do people, resources and ideas travel across borders and oceans? This broad question is explored in “A Beast, a God, and a Line”, a new exhibition of contemporary art from Asia and the Pacific region.

The exhibition, which opens at the Museum of Modern Art in Warsaw on July 20, travelled from Bangladesh, where it premiered at the Dkhaka Art Summit in February.

The exhibition features work by over 50 artists from across the region, from countries as different as India, Madagascar and Australia. Rather than be limited to their national context, the artists explore human migration, transfer of knowledge and blurred boundaries between cultures and continents. They use a wide range of media, from collages to photography overlaid with drawings. Engaging with the region’s rich “cultural fabric”, many of the works literally use fabric – local textiles loaded with economic or historical significance.

While some of the pieces draw on ancient forms and techniques, their themes – ranging from the legacy of colonialism to economic exploitation of workers – feel fresh and contemporary. In her collages, Madagascar-born artist Malala Andrialavidrazana uses colonial-era maps to question outdated assumptions about geography. Meanwhile, Gauri Gill, a photographer based in New Delhi, worked with indigenous artist Rajesh Vangad, who overlaid drawings on her images. By incorporating this response, the pieces become a two-way conversation between urban centre and marginalised communities.

These broad themes are relevant far beyond Asia and the Pacific, the organisers emphasise. 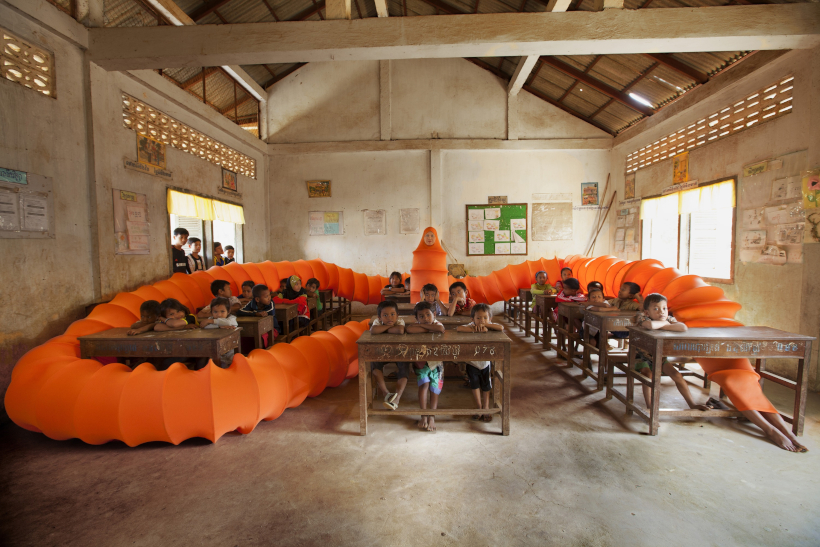 “The exhibition shouldn’t be viewed as ‘exotic’ or ‘foreign’ – as something alien to what is happening around us [in Europe],” said its curator Cosmin Costinas, director of Para Site contemporary art centre in Hong Kong.

Presenting the exhibition in Warsaw on July 19, Costinas – who was born in Romania – praised the Museum of Modern Art for deciding to host it.

“This is testament to the museum’s vision, doing its work within eastern Europe while understanding that the world is changing and connecting with other parts of the world,” he said. “It has the vision to go beyond parochial expectations about what an institution in [this region] should do and take part in a global conversation.”

Since debuting in Dhaka, the exhibition has already been shown in Hong Kong and Yangon. In Warsaw, it is housed at the Museum on the Vistula, the modern art museum’s riverside location, where it can be viewed until October 7.